Credit booms that result in a financial crisis, subsequently giving way to a prolonged phase of debt reduction, have been repeated on many occasions throughout history. Several developed countries are now in the deleveraging phase of one of the most remarkable episodes of this kind. The United States and Spain are two leading exponents. Each case has its own particular features, both in terms of how it arose and also its consequences and the nature of the readjustment. These differences might be due to factors such as the institutional framework or the response provided by economic policy. This box looks at some issues related to the role played by non-financial companies.

The outbreak of the subprime mortgage crisis put an end to a long, intense period of credit expansion in the United States. In 2008, the debt of non-financial institutional sectors was around 230% of GDP. At the same time, in Spain it had almost reached 270%. Surprised by the vulnerability shown by the system, analysts and economic authorities quickly looked to the past to find similar situations and pointers on how to handle the process successfully. The two most frequently mentioned cases are the United States in 1930 (the Great Depression) and Japan in 1990 (the Lost Decade). The graph below illustrates the size of the debt accumulated at the start of each adjustment phase.

As can be seen, in 2008 the indebtedness of non-financial firms in the United States was lower than at the start of these two big benchmark episodes. However, it was as high in Spain. This observation is true both for the level of corporate debt compared with GDP and also its relative weight in the aggregate debt of the different institutional sectors. What implications might this have? Unfortunately, there have been few analyses of the macroeconomic effects of the level of corporate debt until very recently. Theoretically, there is no established consensus(1). Empirically, most of the few studies carried out focus on countries' total debt or credit, if necessary distinguishing between public and private debt but without looking at the details of the latter.(2) One exception to this is the recent work by Cechetti et al. (2011),(3) which provides interesting findings. They identify a stronger negative influence of corporate debt than household debt on GDP growth. Both have an effect when they go beyond a similar threshold (90% of GDP for corporate and 84% for household, in the historical experience accumulated to date) but, from this point onwards, the impact in terms of a drag on economic growth is more significant when it's corporate debt that inflates.

According to this finding, we could attribute the better macroeconomic performance of the post-2008 United States in comparison to its performance during the Great Recession and Japan's Lost Decade to the more moderate situation of corporate debt, as the boom had been dominated by households and the financial sector. But other factors are also included in the fray, especially the fast, aggressive response of economic policy since 2008, so that this claim cannot be categorical, particularly when the authors admit that, due to a lack of data, the estimated size of these effects is somewhat imprecise. Whatever the case, another area where the relative strong equity position of US companies appears to have a favourable effect is in stock market trends. Since 2008 there has not been anything resembling a wave of company bankruptcies; quite the opposite, in fact: they have reinforced their balance sheets and quickly improved their income statements. Consequently, the stock market recovery has been notably fast, in contrast with the situation after United States-1929 and Japan-1990.

In short, US companies arrived at 2008 with a high but tolerable level of debt: without exceeding the harmful 90% threshold and in line with the long-term trend (the main reason for a secular upward trend is financial deepening, associated with economic progress and increasing wealth). One of the reasons why firms acted relatively moderately during the 2003-2007 credit boom is they had already gone through an expansionary cycle of debt and investment just a few years earlier (related to the internet bubble), with its subsequent purge. Consequently, companies did not need any huge investment and self-financing was also abundant, thanks to healthy income statements.

After the crisis erupted in 2008, this prudential behaviour has continued and even intensified. Gross debt as a percentage of GDP has fallen. In fact, a notably conservative approach can be seen in the overall balance sheet. For example, in the trend of the debt to asset ratio, in longer debt maturities and, above all, in the large and increasing proportion of liquid assets in the overall asset composition. Some have compared the behaviour of firms over the last few years with that of the emerging countries: prioritizing caution and ensuring liquidity. In the case of emerging countries, this attitude is due to their traumatic experiences after the Asian and Latin American crises at the end of the 1990s. For firms, their shock came in 2001 when the internet bubble burst and with the sudden paralysis in 2008, both in access to bank financing and to the bond market.

US companies have strengthened their equity position in the system's last four years of deleveraging. Profits are high, so self-financing has played an important part. Moreover, the bond markets have quickly reopened and firms have taken advantage of this to issue bonds and build up liquidity. In the opinion of some observers, this behaviour on the part of firms is counterproductive for the US economy as a whole, as it does not help to offset the recessionary effects of the inevitable deleveraging of the rest of the institutional sectors. In this respect, it would be preferable for companies to reduce their savings, distributing more funds to their shareholders or, even better, expanding investment and creating jobs.

The situation in Europe has a lot in common with that of the United States. The equity position of firms was reasonably solid at the start of the 2008 crisis and has remained stable over the last few years, with European companies also behaving conservatively. Ultimately, on the Old Continent the deleveraging being carried out is associated, as in the United States, with financial institutions, with households in some countries and, more recently, with governments, but not with the corporate world. However, Spain is an exception, given that its level of corporate debt is clearly higher than the norm. A large part of this phenomenon can be put down to the sectoral composition of economic activity and, in particular, the excessively high volume represented by the real estate and construction secto.(4) As is well-known, an accumulation of debt in this sector interacts negatively with the balance sheets of financial institutions and is acting as a drag on the country's economic recovery.

(1) The contributions provided by H. Minsky constitute the most frequently mentioned background. Points on the Japanese experience have been made by R. Koo. Among the most recent studies is the one by G. Eggertsson and P. Krugman, «Debt, Deleveraging and the Liquidity Trap», mimeograph, (2010).

(4) See the box «The excessive debt of Spanish firms: a matter of many or just a few?» in this volume.

This box was prepared by the Financial Markets Unit 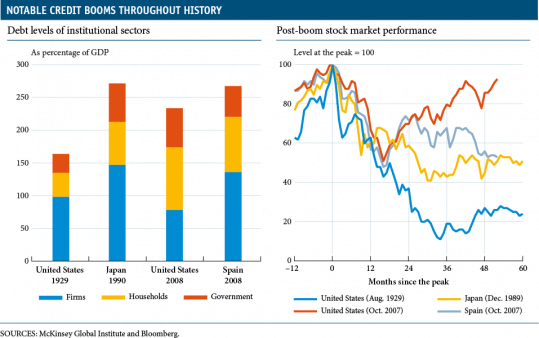 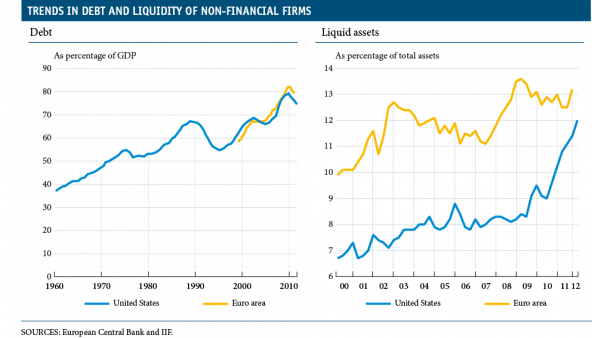 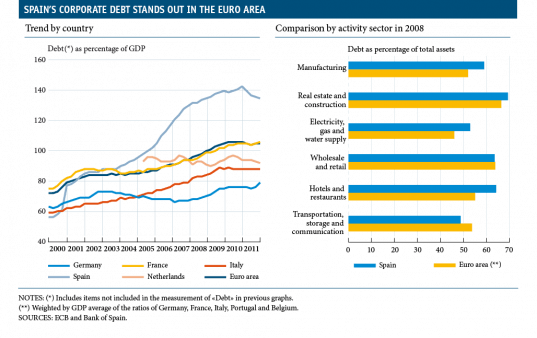