We analyse the economic impact of the war in Ukraine on Europe, the US and the major emerging countries. 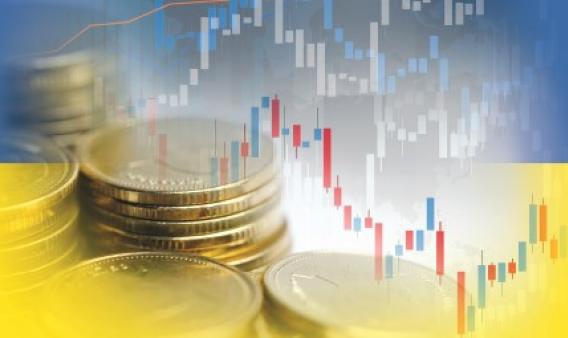 The main consequences of the war in Ukraine will be the cost in human lives, massive damage to country’s physical infrastructure and the biggest humanitarian crisis in Europe since World War II. The IMF suggests that Ukraine’s GDP could fall by as much as 35% in 2022, and more than 4 million people have left the country in the first four weeks of the war – a figure that will increase if the conflict continues. Russia, meanwhile, would face a fall of at least 8.0% as a result of the impact of the strong sanctions in place.

Moreover, the war in Ukraine represents a new shock for the global economic recovery through its direct negative impact on the supply of commodities, given the importance of these countries in the global supply,1 as well as through the indirect effect triggered by heightened uncertainty and its implications for confidence and the financial markets. The war is also likely to exacerbate the problems in global supply chains, which were beginning to show timid signs of recovery at the beginning of the year but were still far from functioning normally. We expect that the net effect will be lower growth and higher inflation, albeit unevenly across countries.

On the first aspect, one of the first consequences of the war and of the sanctions imposed on Russia (at the close of this report, the EU had left the import of oil and gas out of the sanctions) has been the sharp rise in oil and gas prices, which has forced a substantial revision of the outlook for energy prices. In just two weeks, we have raised the projected average price for 2022 of a barrel of Brent oil by 16 dollars to 105 dollars, while we have raised the average price for natural gas by 51 euros to 125 euros/MWh.

This increase in the energy bill and the rise in uncertainty generated by the outbreak of war explain the 1.4-pp reduction in projected growth for the euro area in 2022, cutting it to 2.6%. This reduction would not be offset by the higher growth we expect for 2023 (+0.3 pps, to 3.1%). It should be noted that the euro area economy would not fall below its pre-COVID level (which was recovered in Q4 2021) throughout the forecast horizon. By country, the steepest downward revisions in growth for 2022 are in Germany (−2.1 pps, to 1.2%) and Italy (−1.7 pps, to 2.4%), given their greater exposure to imports of gas from Russia and the greater relative weight of industry in their economic structure (excluding construction, 22% and 18% of their GVA, respectively), a sector particularly affected by the bottlenecks and the increase in the price of a large part of their inputs. 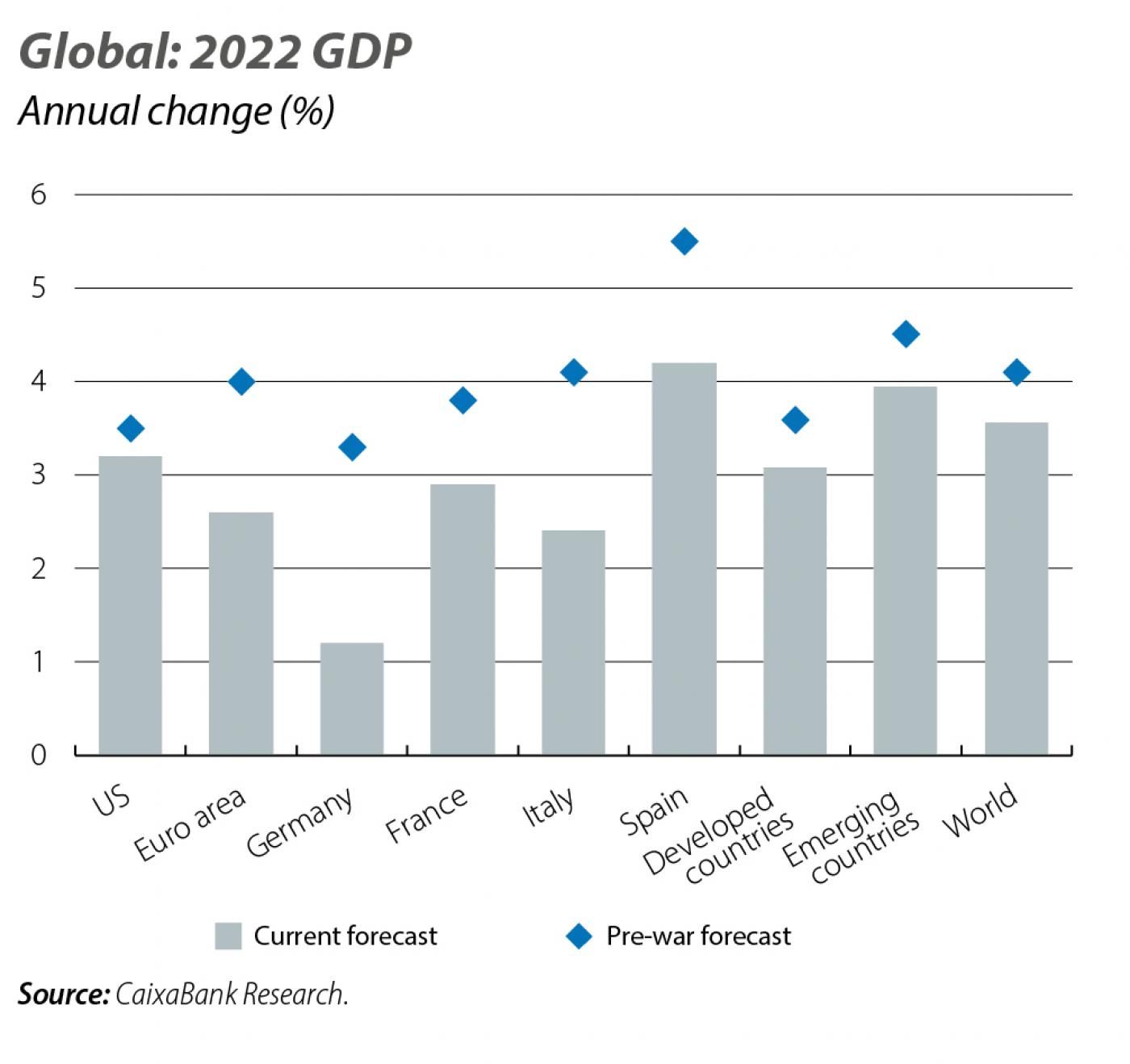 On the other hand, the sharp rise already registered in energy prices, coupled with the prospect of them staying high for longer, explain the upward revision of average inflation in the euro area of nearly 1.0 pp for 2022, bringing it to 5.3% and marking a new annual high since the beginning of the series (1997).

US: growth holding up, exacerbation of inflationary tensions

The US, meanwhile, is in a better position to circumvent the impact of the turmoil generated by the armed conflict in Ukraine, owing to its lower economic ties and the fact that it is a major energy producer (19% of the world’s crude oil and 24% of the world’s gas in 2020). However, the worsening of the global supply problems, the reduced purchasing power of households in the current context of high inflation, and the tightening of financial conditions following the withdrawal of the monetary stimulus explain the 0.3-pp cut in the 2022 growth forecast, placing it at 3.2%, while we revise the forecast for 2023 up by 0.2 pps to 2.6%.

As for inflation, the impact of the higher energy prices is compounded by the internal pressures stemming from the rise in wages. As a result, we raise our forecast for average annual inflation in 2022 by 0.6 pps, bringing it to 6.5%. 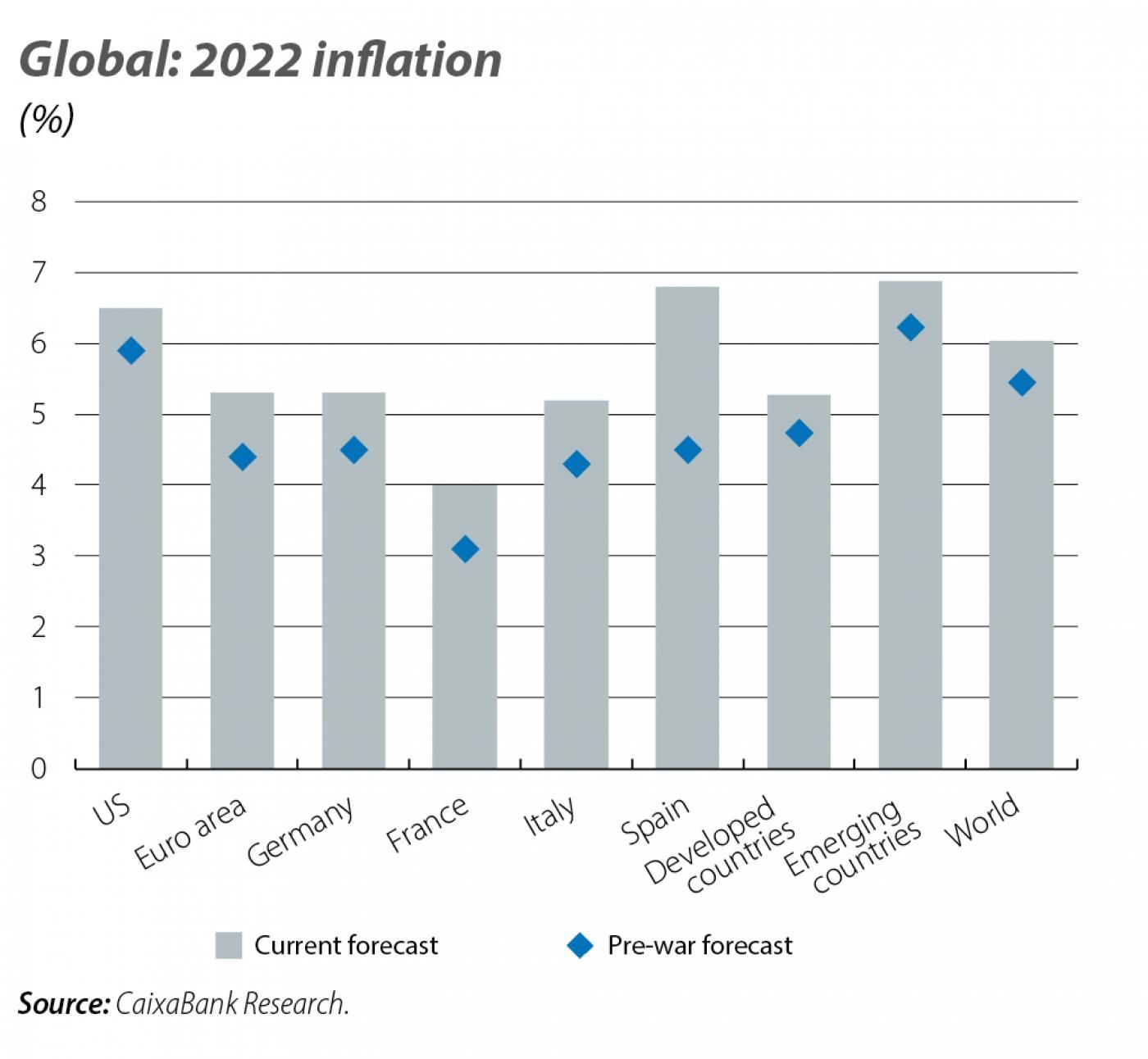 For emerging economies, their productive structure will be key: those that are net exporters of commodities will benefit from the sharp rally in their prices, while net importers will be the hardest hit. In addition, the impact of the Fed’s normalisation of monetary conditions must be taken into account, since this has historically led to capital outflows from these economies, which would put those with external weaknesses (i.e. a high current account deficit, high foreign debt and low levels of reserves) in a delicate position.

Among emerging countries, China would be a special case as it is both a producer and a major consumer of commodities, so the net impact of the conflict is less clear. More relevant to its growth outlook is the implementation of its zero-COVID policy, which was already hindering economic activity in recent months and is driving the downward revision of growth forecasts for 2022 (4.7% vs. 5.7% estimated in February).

The economies of Eastern Europe and Central Asia deserve special mention, as the conflict will deal a greater blow to their growth compared to countries in other regions due to their close economic and financial links with the conflict zone. On balance, the net impact for emerging markets as a whole is lower growth (4.0% vs. 4.5% in February) and higher inflation (6.7% vs. 6.2%).

However, the magnitude of the economic impact is still quite uncertain and will largely depend on the duration of the conflict and the economic policies that can be implemented. What seems clear is that the war will lead to a major cut in growth while triggering higher inflation, and its impact will be uneven across regions, with Europe being the hardest hit. 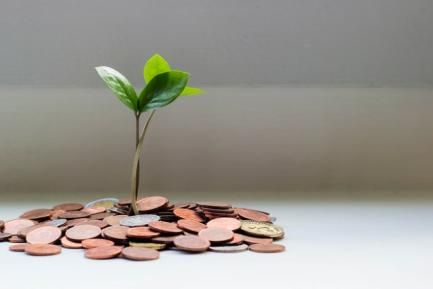