The situation in the Spanish tourism sector has improved dramatically during the summer months, beating the forecasts of many companies in the sector. 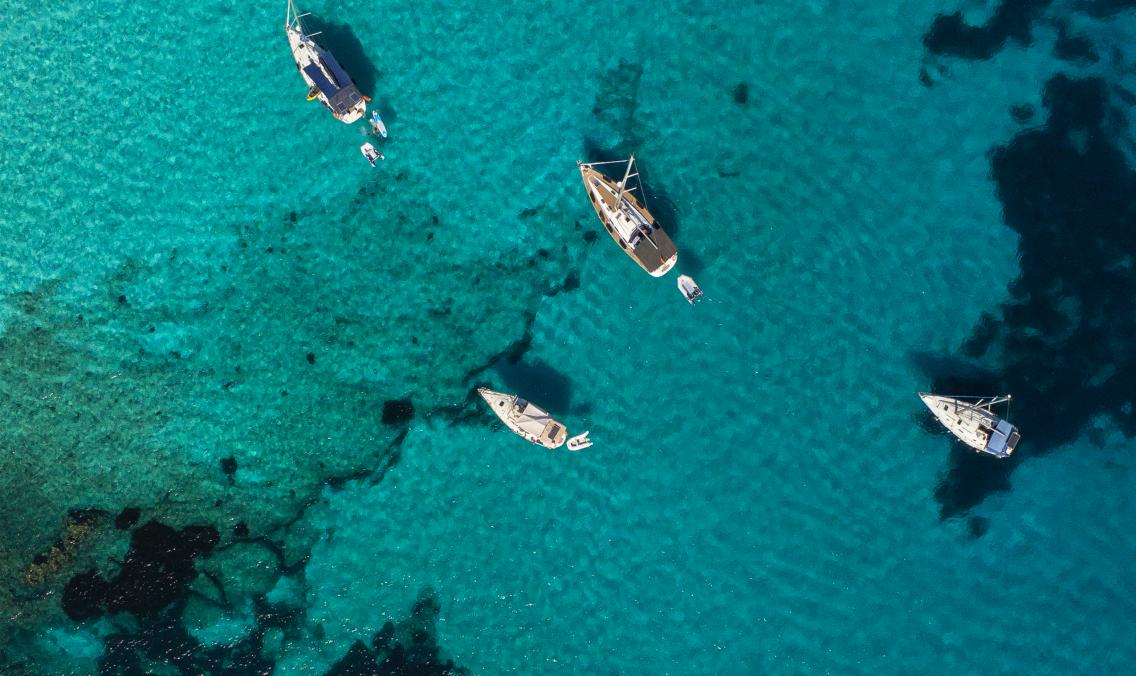 The situation in the Spanish tourism sector1 has improved dramatically during the summer months, beating the forecasts of many companies in the sector. The vaccination of a large part of the population, the implementation of the EU Digital COVID Certificate, high pent-up tourist demand and the easing of restrictions in the hospitality sector have been the compendium of factors that have supported a significant and necessary recovery for the sector, as well as laying a stronger foundation for the coming quarters.

Tourism demand indicators already showed a clear turning point during Q2, with the state of emergency coming to an end in early May and the approval of the EU’s Digital COVID Certificate at the very end of the quarter. Thus, in July and August tourist demand sprung to life: tourist overnight stays went from falling by 81% in April compared to the same month of 2019 to 22% in August. The improvement in the figures was the result of the extraordinary growth of domestic tourist demand, which surpassed the level observed in August 2019 by 12%, supported by the substitution of international travel for domestic tourism.2 International demand, meanwhile, improved significantly but with very marked differences depending on the country of origin. Tourism from the EU registered a 37% decline compared to August 2019 (–88% in April), while non-EU tourist arrivals ended August still well down (–69%). 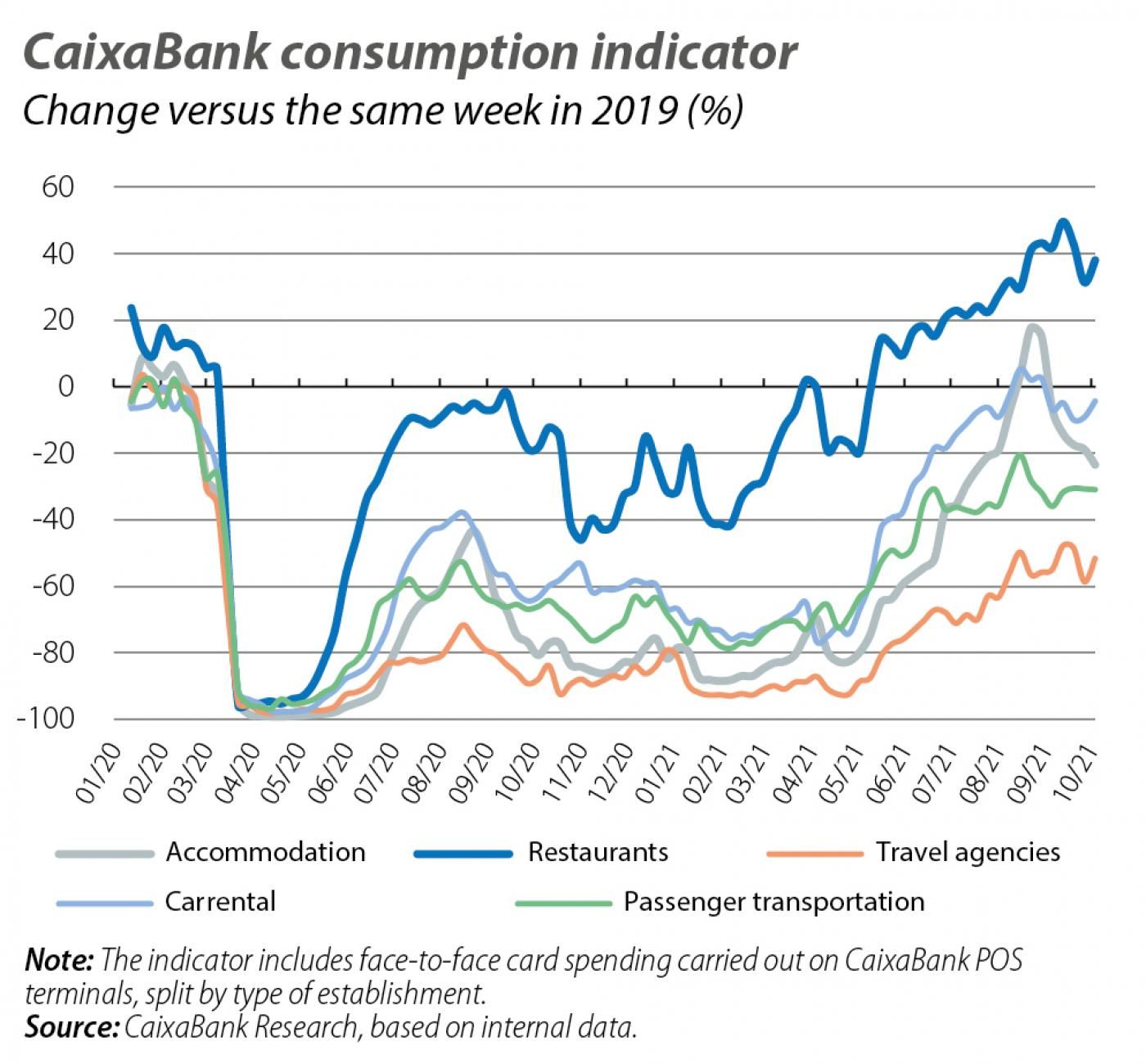 The number of tourism firms that were either inactive or shut declined dramatically, especially in the hotel sector. According to data from the National Statistics Institute, in August 2021 there were 13% fewer hotel establishments open than in August 2019. This represents a very vigorous recovery compared to the 40% drop in the number of establishments open in 2020 on average.

The recovery in tourism prices has shown mixed signals. Hotel prices in August, measured using the ADR (average daily rate), stood 5.2% above the same month of 2019. On the other hand, according to the Consumer Price Index, the catering sector has maintained a price level very similar to that of 2019 since the outbreak of the COVID-19 pandemic, whereas in the air transportation sector the marked price adjustment which has been in effect since the pandemic began still persists. 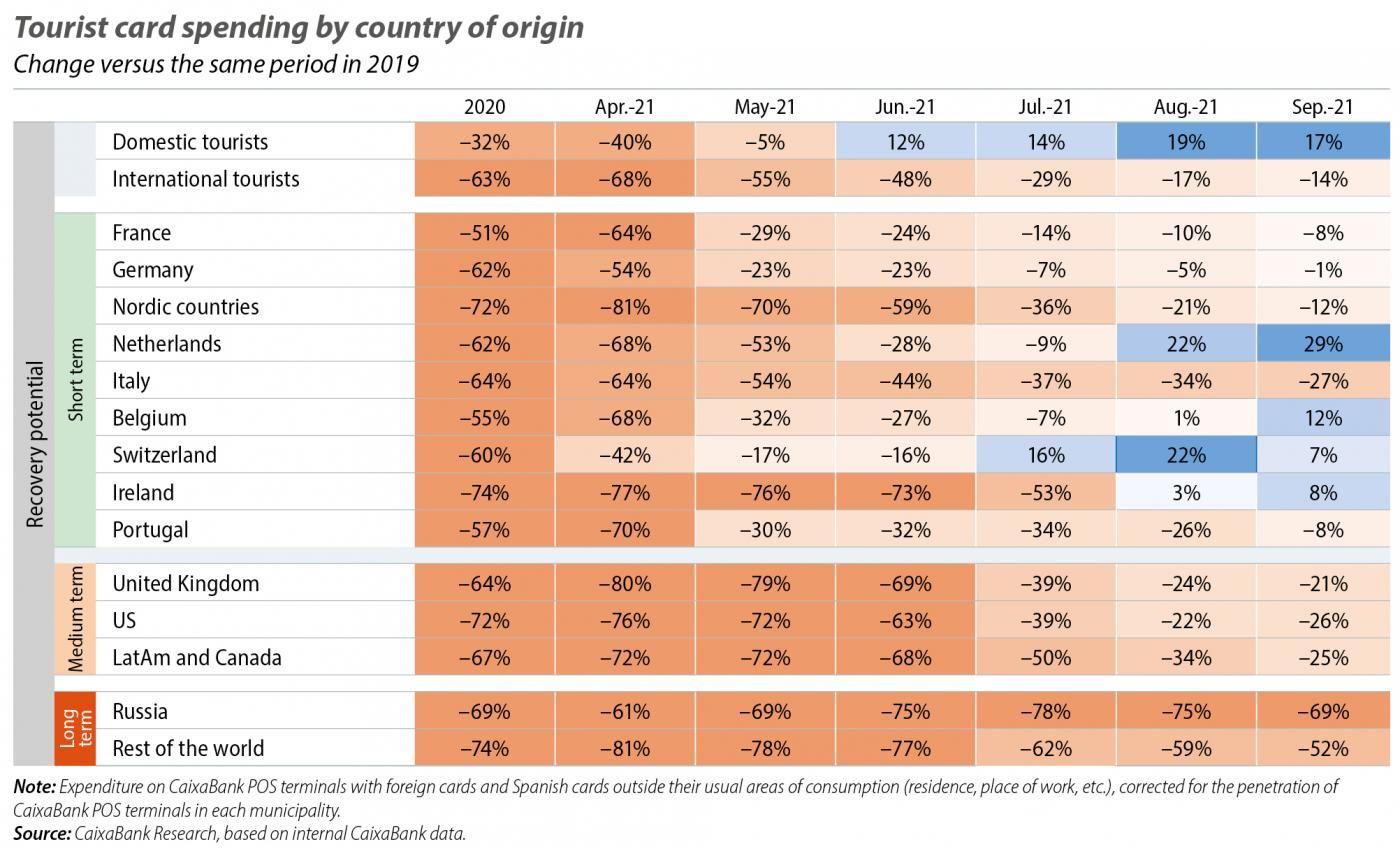 CaixaBank’s POS terminal card expenditure indicator by branch of tourist activity, as shown in the first chart, reflects certain particularities between branches. Card spending on accommodation (hotels, campsites and the like) improved dramatically during August, standing 6% above the figure of August 2019. That said, in September there was a moderate cooling in the sector, falling 16% compared to the same month of 2019. Spending on catering, meanwhile, has remained well above the 2019 level, registering growth of 41% in September.3 Other businesses linked to tourism are recovering at very different rates, with payments in travel agencies remaining particularly depressed during the summer season.

On the other hand, CaixaBank’s POS terminal card payment data split by country of origin allow us to infer the recovery potential by source market. Domestic tourism thus confirms its complete recovery. The source markets of the EU came very close to the expenditure levels observed in the same period of 2019, even exceeding them in some cases. This, combined with the upward trend maintained in September, suggests a potential recovery in the short term. On the other hand, we see the United Kingdom, which is trailing a little further behind than expected, along with the US, Canada and Latin America, which show a very clear trend of improvement. Finally, the rest of the source markets show a weaker recovery.

CaixaBank Research’s forecasts for the tourism sector in Spain

For the remainder of 2021, we expect that: (i) international tourist spending will continue to grow, supported by the recovery of tourism from the EU and the improvement of British tourism, and (ii) domestic tourism spending will maintain pre-COVID levels. Thus, we estimate that tourism GDP will grow by 55%, placing it at 54% of the 2019 level.

Looking ahead to 2022, we expect international tourist spending to double, thanks to the normalisation of EU tourism and the recovery of markets such as the United Kingdom and the Americas, mainly the US and Canada. As for domestic tourism, we expect the greater propensity to travel domestically will continue to prop up Spanish tourist spending at levels slightly above those of 2019. With this, we expect tourism GDP in 2022 to stand at 88% compared to 2019, registering 63% annual growth. 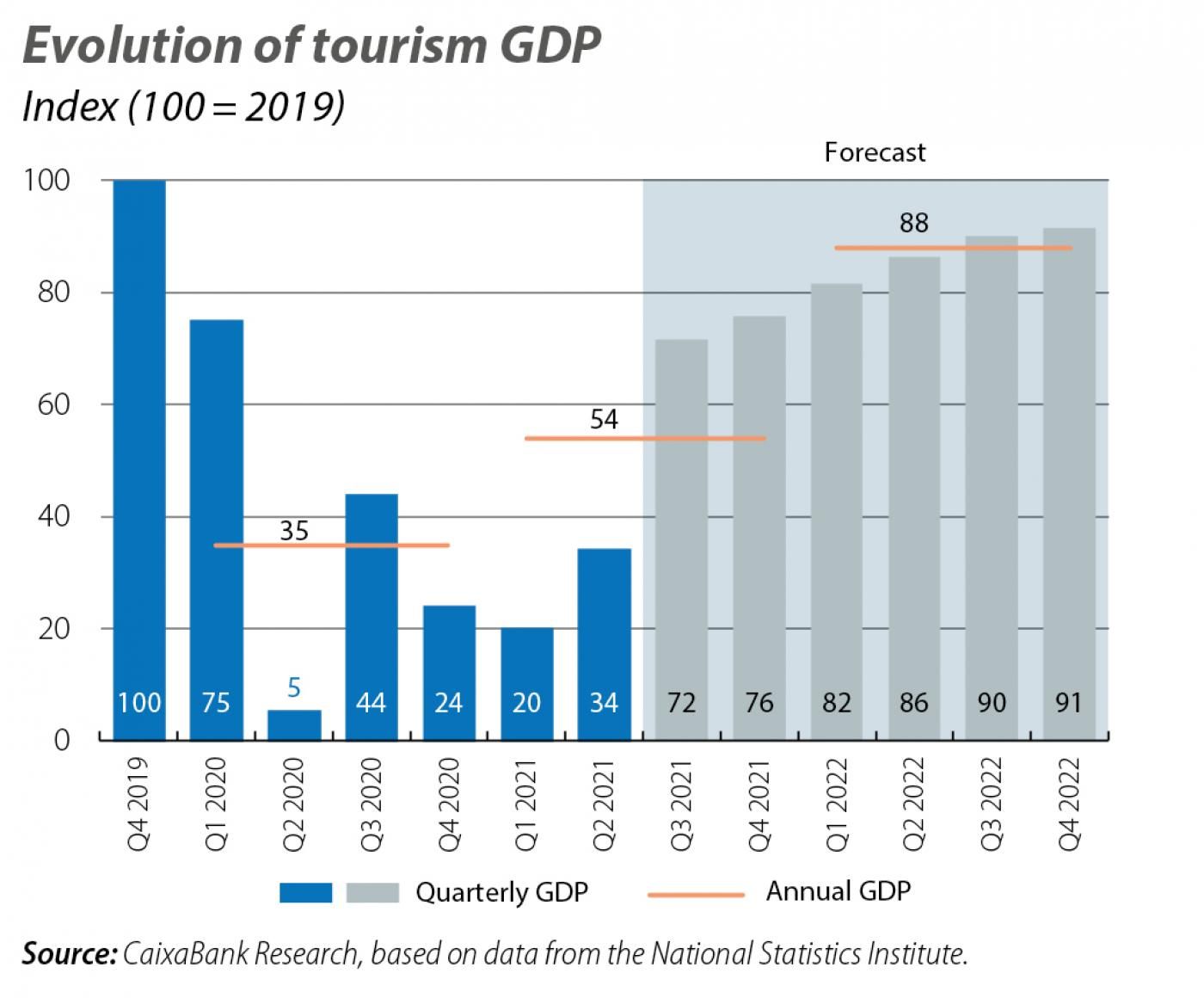 With this outlook, we expect that 2022 will be accompanied by a normalisation of the sector’s profitability. Despite this, the role of economic policy over the coming months will remain key, including the ERTE furlough schemes and the management of the Fund for Supporting the Solvency of Strategic Companies, among others. In addition, agile and effective management of the Next Generation EU (NGEU) funds will also be important in supporting investments in digitalisation, sustainability and infrastructure improvements. These are aspects which a heavily damaged tourism industry is unlikely to be able to take on in its current state, but they will be much needed in order for Spain to emerge from this crisis maintaining its status as the most competitive tourist destination in the world. 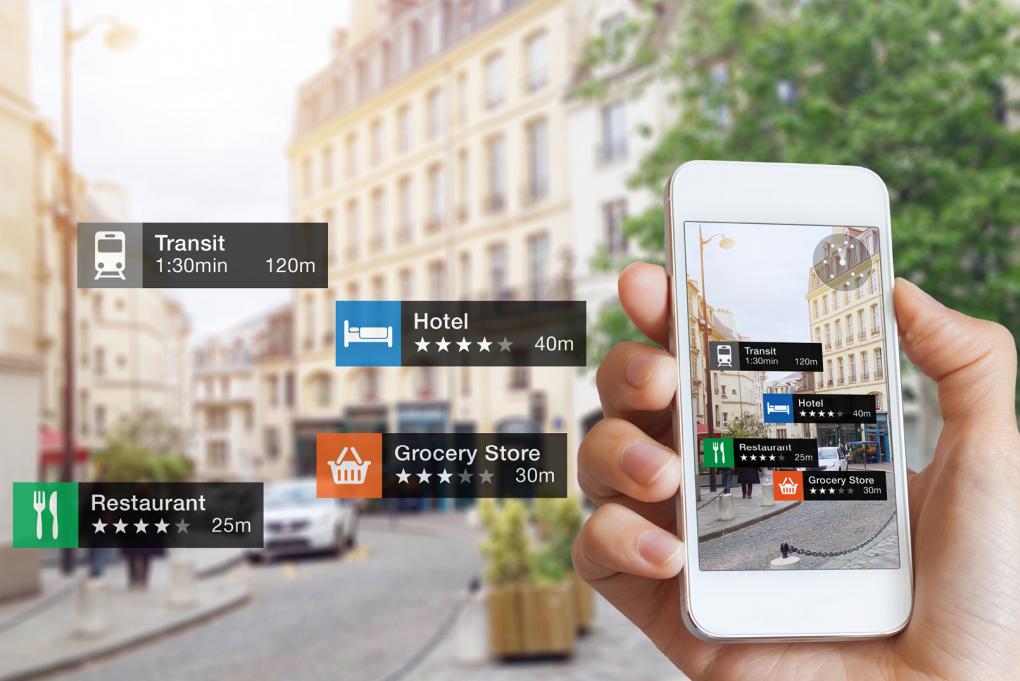 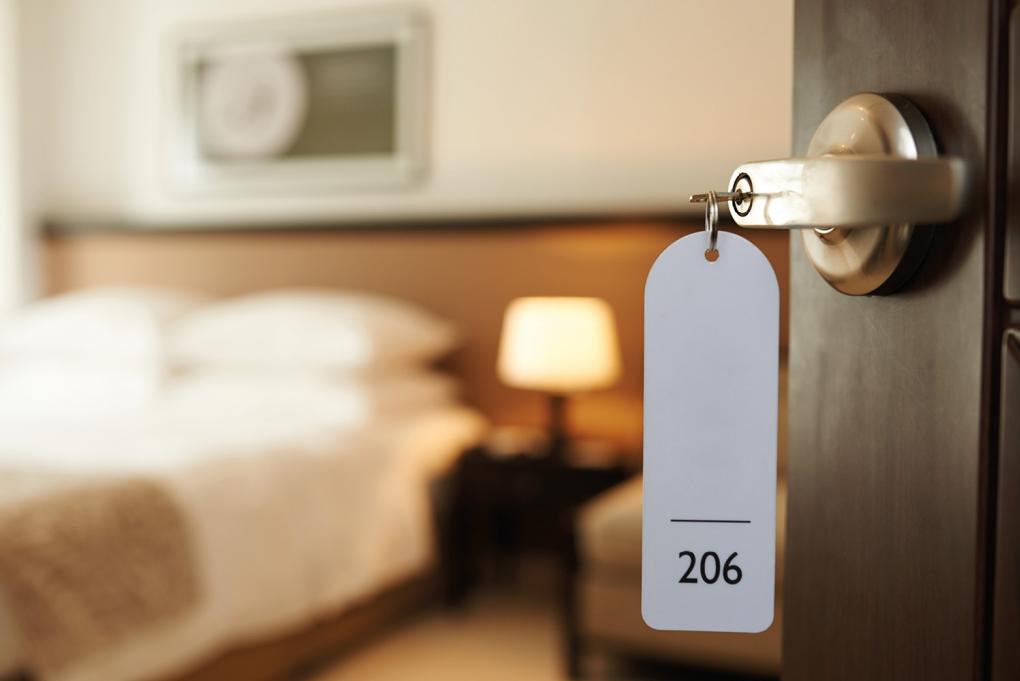