What economy is awaiting the next President of France?

France’s new President will inherit an economy which, in terms of economic activity, has recovered from the financial crisis and whose GDP, in 2016, was 4% higher than in 2008. However, real GDP growth over the past few years has been modest,1 clearly below other advanced economies (see the first chart). The outlook is not very promising for 2017-2018 either: the consensus of analysts predict growth to stand at around 1.3%. Moreover, although reducing the unemployment was one of the priorities of the former President, François Hollande, the unemployment rate is still high (10%), especially among the young (24%), while job creation remains sluggish (0.7% annually).

This lack of economic vigour reflects a lower productivity growth,2 largely due to significant structural rigidities. The country has a relatively inflexible labour market, a high tax burden,3 and complex regulations which act as a barrier to corporate investment and growth.

Over the past few years, some progress has been made to tackle these rigidities and increase the dynamism of the economy. For instance, the labour market has been reformed, by clarifying the legal definition of dismissal for economic reasons, reinforcing collective bargaining at the level of company and sector, and improving training for the unemployed. Efforts have also been made4 to ease the tax burden and boost competitiveness by reducing companies’ Social Security contributions.5 The Macron Law of 2015 of market liberalisation was aimed at encouraging business by increasing Sunday opening times and liberalising various regulated professions.

Nevertheless, although these reforms were going in the right direction, their impact seems to have been limited. Therefore, France still requires an ambitious agenda of reforms. One of the priorities is to increase the rate of job creation in the private sector. To do so, the main international organisations believe it is important to reduce the labour market’s excessive segmentation, which impedes labour factor mobility, as well as simplifying the labour legislation.

Another priority is the consolidation of public finances. Although the budget deficit has fallen from 7.2% of GDP in 2009 to 3.4% in 2016, public debt is close to 100% of GDP, which makes the French economy vulnerable to any changes in investor sentiment and higher interest rates. Improving the government’s efficiency could significantly help given the high level of public spending, which is far above the euro area’s average (57% of GDP compared with 47%).

Finally, the French economy would also greatly benefit from an improvement in the business environment and a lowering of the red tape to start a business. For example, in the 2017 World Bank Doing Business report, France ranked 29th, far below other European countries such as Germany and the UK, and also behind Poland and Portugal.

5. The tax wedge on labour (taxes on labour as a percentage of all labour costs) in France (48%) is the fifth highest of OECD countries. 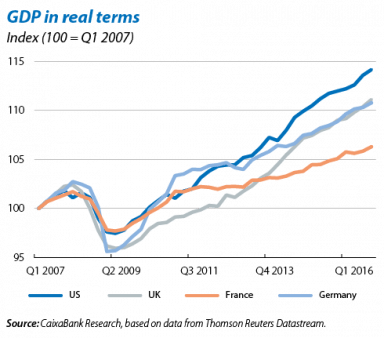 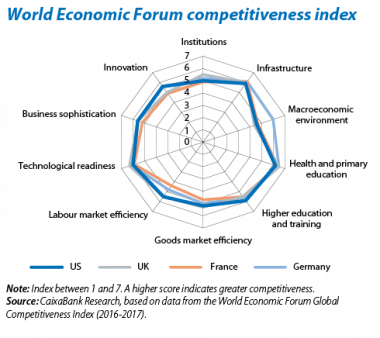