Oil: reflections and outlook for 2019

2018 has been a turbulent year for the oil market. At the beginning of the year, crude oil was trading at around 65 dollars and the main agencies expected prices to remain at around this level at the end of the year. However, by the close of Q3, the price of a barrel of Brent stood above 85 dollars (a cumulative rise of almost 30%), and analysts were revising their forecasts upwards. As an example, early in the year, the US Energy Information Administration (EIA) estimated that the price of a barrel of Brent would be 60 and 61 dollars in 2018 and 2019, respectively. By October, the prediction for 2018 and 2019 had risen to 74 and 75 dollars per barrel, respectively. However, in recent weeks, the price has plummeted 20 dollars from October’s high point. In this context, it is well worth reflecting on the recent trends in order to shed light on the key factors behind these sudden changes. This will help us to fine-tune the outlook for 2019.

First of all, throughout the year, OPEC and its partners have cut their oil production by more than what was initially agreed (see first chart).1 A key reason behind this over-compliance is that Venezuela, the country with the largest proven reserves of crude oil, is experiencing a deep economic recession that is forcing it to reduce its oil production:2 it has gone from producing more than two million barrels a day in early 2016 to just over half this level by the end of 2018. A simple exercise allows us to highlight the decline in Venezuela’s oil production: while on average over the past few years OPEC has cut its production by 20% more than what was agreed,3 it would have reached 98% of its agreed production levels if Venezuela had met its targets. But Venezuela is not the only country experiencing production problems. Crude oil exports from Iran, the third largest producer in OPEC, have suffered as a result of the sanctions imposed by the US. These sanctions were implemented on 5 November but affected both production and exports of crude oil in advance of that date. Specifically, since the announcement of sanctions in May, and up until November, Iran’s crude oil production has declined by 10% and exports have fallen by 35%. However, a few days before the sanctions came into force, the US announced the temporary waiving of sanctions on eight countries, including China and India, the two largest importers of Iranian crude oil (together they account for nearly 70% of imports). This eased the tension in the supply of oil and contributed to the recent moderation in prices between October and November.

Faced with the production cuts of Iran and Venezuela, we must ask ourselves who can compensate for their lower production. To answer this question, we focused on the countries belonging to OPEC that are producing below their capacity. One of the indicators that helps us to understand just how restricted the oil market is at any given time is the excess capacity, which the EIA defines as the volume of production that can be brought to market in less than 30 days and can be sustained for at least 90 days. For example, if the excess capacity is zero, producers are operating at their maximum capacity and do not have any margin to increase their production in the short term. Therefore, lower levels of excess capacity indicate greater tension in the oil supply. If we break these values down by country, we note that Saudi Arabia is not only the largest oil producer in the cartel, but that it is also the country with the greatest idle capacity in recent years. It currently has nearly 50% of OPEC’s excess capacity. Therefore, it is the only producer with a big enough margin for manoeuvre to compensate for the losses of Iran and Venezuela (see second chart).4 Indeed, the increase in Saudi oil production observed in recent months suggests that it is now compensating for these losses. However, this is at the expense of lower excess capacity which, as can be seen in the second chart, is now at relatively low levels.

Another country that could offset the losses of Iran and Venezuela is the US. However, bottlenecks in the production of shale oil are slowing its growth. These problems are appearing in two areas. On the one hand, there is a short to medium-term logistical problem due to the shortage of pipelines (the network of pipes through which oil is transported over long distances). New pipelines are currently under construction, but they may not be operational until the end of 2019 and, until then, shale oil production is unlikely to be able to reach its full potential. On the other hand, there are problems in the longer term, such as high staff turnover in the sector, the low level of unemployment and the intensive use of water and sand in shale oil extraction. While the unemployment rate in the US was 3.8% in the third quarter of the year, for the oil sector it was 2.3%, which is hindering recruitment and making labour more expensive. In addition, in order to extract more oil from the wells, companies are using more than double the amount of water and earth that they were using in 2014, generating environmental and logistical problems.

All in all, the lower excess capacity, the reduction of inventories5 and the bottlenecks in the US indicate that the supply of oil is more vulnerable to other unexpected disruptions now than it was at the beginning of the year, and these factors also add uncertainty and volatility to the crude oil market. This has been reflected in the large fluctuations in the price of Brent oil throughout 2018. For example, the price rose from 62 to 79 dollars between February and May, and from 70 to 86 dollars between August and October, before falling suddenly from 86 to 65 dollars between October and November.

On the demand side, in 2017 and early 2018, higher than expected global economic growth, led mainly by the emerging economies, supported the demand for crude oil and contributed to the price rise.6 However, in recent months, the analysts’ consensus has revised economic growth expectations for the remainder of this year and the next downwards. Similarly, the EIA has been revising its forecasts for global oil consumption downwards since May (see the third chart). In addition, in mid-November, OPEC also revised its outlook for global crude oil consumption downwards for both 2018 and 2019, further contributing to the drop in the oil price between October and November.

With all these elements, oil prices are likely to remain volatile over the coming months. On the one hand, geopolitical risks and any additional disruption in production could put even more stress on a market that is already turbulent. In this context, on 6 and 7 December, OPEC and its partners are meeting in Vienna to decide whether to impose new production cuts. An agreement to prolong the cuts throughout 2019 would reduce uncertainty surrounding the future oil supply. However, in the medium term, the slowdown in the global economy and a rise in shale oil production will probably exert downward pressure on the price.

1. For more details on the production agreement, see the Focus «The oil producer agreement: the cartel is back» in the MR01/2017.

2. According to the latest forecasts by the International Monetary Fund, Venezuela’s real GDP suffered a cumulative decline of around 30% in the past two years.

3. This has been partly offset by a 24% lower production cut among non-OPEC countries. Thus, on the whole and since January 2017, all the countries involved in the agreement have cut production by 6% more than what was agreed.

4. Due to the sanctions on Iranian oil exports, we exclude Iran from the aggregate of all the other OPEC countries, assuming that its idle production capacity is unlikely to offer a support factor for the global crude oil market.

6. China was responsible for 40% of the growth in oil demand in the last year. 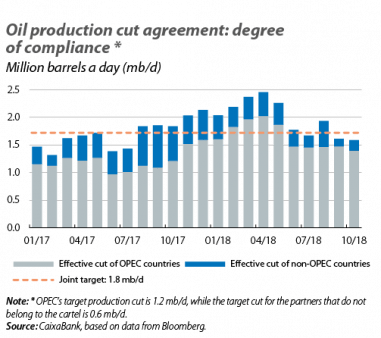 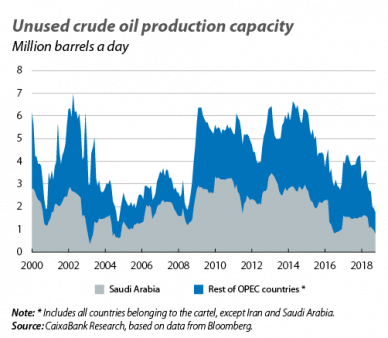 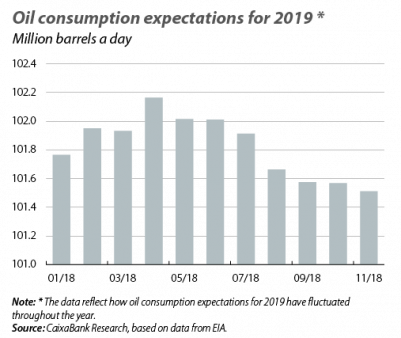