• The experience of the Riksbank highlights the doubts over negative interest rates: despite a worsening economic outlook for Sweden, it raised the interest rate from –0.25% to 0% in December and abandoned its policy of negative rates.

The ECB’s immersion into more negative interest rates (with a cut from –0.40% to –0.50% last September) coexists with the uncertainty over whether this policy is effective. In theory, there is no law against (slightly) negative rates, which can be transmitted to the economy in the same way as positive ones.1 However, the experience of the central bank of Sweden (Riksbank) illustrates that, in practice, there are doubts about its effectiveness.

2019 in Sweden: the outlook deteriorates... and the Riksbank raises rates

On 19 December 2019, the Riksbank raised its interest rate from –0.25% to 0%. In part, this increase (like the one implemented in December 2018 from –0.50% to –0.25%) was a reaction that came (voluntarily) late: the domestic health of the Swedish economy supported rate hikes in 2017 and 2018, but following a long period of low inflation, the Riksbank opted to prolong its accommodative monetary policy for a while longer. However, its decision to raise rates now, in a context of a deteriorating economic outlook (see first chart)2 is somewhat unexpected. Indeed, it suggests, at least in part, that the decision reflects doubts about the effectiveness of negative rates. In fact, in a relatively explicit manifestation of these doubts, some members
of the Riksbank stated that they preferred not to keep rates in negative territory unless the situation made it strictly necessary.3

The doubts over negative rates

The Riksbank had kept rates negative since 2015, and one of the widely-argued reasons for raising them back up to 0% was related precisely to this time span: operating with negative rates for a short period of time is not the same as prolonging this environment for many years. If such an environment persists, the compression of interest margins can end up eroding the capital positions of the financial system, increase the cost of access to credit for households and firms, and have a contractionary effect on the economy.

The central banks that have implemented negative rates argue that the net effect of their measures has, so far, been positive. However, some studies document the existence of adverse effects in some segments of the economy. In the case of  Sweden, Eggertsson and co-authors4 detected a breakdown in the transmission of monetary policy: when the Riksbank entered into negative territory, deposit rates stopped responding to cuts by the central bank (also see second chart), while interest rates on loans also lost sensitivity, and there were some instances in which rates actually increased.5

The Swedish central bank has been the first to withdraw from negative territory, but this does not mean it is abandoning accommodative monetary policy altogether. The Riksbank has publicly declared that it expects to keep rates low for a long time to come. Furthermore, December’s rate hike has not stressed market expectations, which, as reflected in the third chart, also point towards the continuity of a dovish monetary policy over the coming quarters.

1. Cash, which offers an interest rate of 0%, puts a stop to negative rates, but the risks and costs of physically storing it (theft, safes, etc.) allow for the implementation of slightly negative rates.

2. The deterioration was widespread worldwide, although there are idiosyncratic signs of maturity in Sweden’s business cycle (such as the cooling of the real estate market and the increase in unemployment since early 2018).

3. In the words of Henry Ohlsson, «it is a good idea not to have negative interest rates unless it is quite necessary to have them», or Stefan Ingves, «a zero policy rate is a better vantage point than a negative policy rate».

5. The authors show that an increase in the cost of credit is more likely when institutions depend more on deposits as a source of funding. 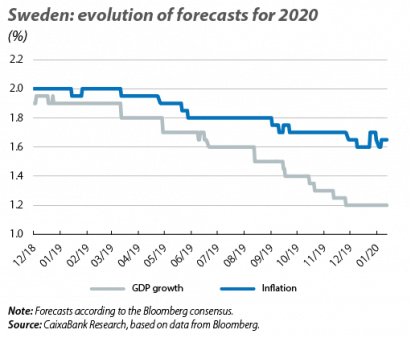 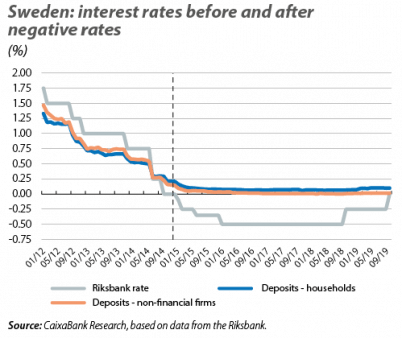 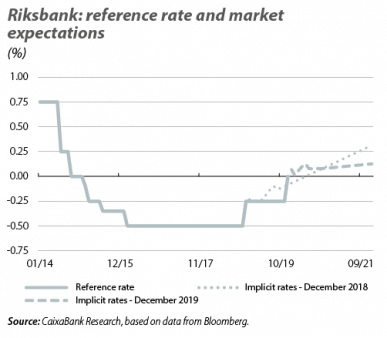