With no new catalysts, in November investors remained cautiously optimistic. If we were to look back to the beginning of the year and list the most relevant factors that have influenced the evolution of the financial markets in recent months, topping that list would be the trade dispute between the US and China, Brexit, the slowdown in global growth and the return to the stage of monetary stimuli by the Fed and the ECB. Indeed, in November some of these very same factors continued to support the improvement in investor sentiment that began in late September. Specifically, the potential signing of the first phase of a trade agreement between Washington and Beijing, coupled with the publication of macroeconomic data (which, while still mixed, in many cases were better than anticipated), bolstered investors’ optimism and appetite for risk. Thus, the markets face the end of 2019 with a more optimistic sentiment, although this remains fragile and subject to political developments and the messages from the central banks.

The stock markets continue on the up. The improved expectations over the trade environment and the stabilisation of some economic activity indicators in the major economies favoured investors’ risk appetite during the month of November. In this context, stock market indices on both sides of the Atlantic racked up gains of around 3%, which were widespread across the various sectors (see second chart). This optimism was also influenced by the Q3 corporate earnings campaigns. In the case of the S&P 500, 78% of companies beat analysts’ forecasts (higher than the average for the past five years, which was 71%). In the euro area, companies reported earnings that were more in line with the consensus estimates, with the forecasts being exceeded in 57% of cases. Looking ahead to 2020, the expectations for earnings per share so far indicate a relative improvement in margins in the case of European companies. In the US, meanwhile, there has been a slight reduction in earnings expectations as companies feel the pressure of the trade tensions and the strength of the dollar. On the other hand, stock markets in emerging countries showed a mixed performance. While the Asian indices registered gains, driven by the improved outlook for the trade negotiations, socio-political tensions in several Latin American countries penalised this region’s stock markets with losses of around –5%.

Sovereign yields remain low. The renewed appetite for risk contributed to a surge in sovereign yields in the US and Germany during the early weeks of November. However, the lack of specifics in the trade negotiations between the US and China muddied investor sentiment in the closing stages of the month. This factor, coupled with the contents of the minutes of the respective meetings of the Fed and the ECB (which reinforced the continuity of the accommodative monetary environment), led to the yields on bonds considered safe-havens to moderate their rise in the second half of the month. Meanwhile, the risk premiums of the euro area periphery increased, in part due to investors’ reaction to the electoral results in Spain, and in spite of Moody’s, Fitch and DBRS keeping their credit ratings for Spain, Portugal and Italy unchanged, respectively.

The central banks reinforce the accommodative financial conditions. In November, the details offered by the minutes of the October meetings of the Fed and the ECB were the focus of attention in the field of monetary policy. On the one hand, at the Fed’s meeting, the majority of its members agreed that the intensity of the risks affecting the outlook had reduced, though it remains high. It was also reflected that, in the view of most members of the Fed, following the 25-bp cut (down to the 1.50%-1.75% range) the current level of interest rates is appropriate for supporting moderate growth, a strong labour market and a rapprochement of inflation towards the 2% symmetrical target. The minutes of the ECB’s meeting, meanwhile, reflected the concern over the persistence of risks affecting the outlook, the moderate levels of inflation and the contained economic growth of the euro area. For this reason, the institution reiterated the importance of implementing the stimulus package announced in September (cutting the depo rate down to –0.50%, resuming net purchases of assets and implementing more favourable conditions for the TLTRO). Finally, in emerging economies, China’s central bank took a first step towards a more accommodative monetary policy. In particular, it lowered the 7-day reverse repo interest rate for the first time in four years (–5 bps, down to 2.50%), as well as the reference rate for new corporate loans (–5 bps, down to 4.15%). These reductions marked a new attempt by the country’s government to support investor confidence and to reduce the financial burden of the corporate sector. Until now, the Chinese authorities had chosen to use other tools, such as reductions in the banking sector’s reserves ratio. However, according to analysts’ consensus, its impact fell short of the expected boost to lending and domestic consumption.

The oil price consolidates its position above 60 dollars in anticipation of OPEC’s next move. The continuity of favourable investor sentiment drove up the price of several commodities linked to the business cycle. Among them, the price of a barrel of Brent crude oil rose by +3.7%, also favoured by the expectation that OPEC will once again extend its oil production cuts at its meeting in early December. In the currency market, meanwhile, the main story was the depreciation of Latin American currencies against the dollar, driven by economic indicators and heightened socio-political tensions in the region. The biggest drop in the month was registered by the Chilean peso, whose value fell to an all-time low and amassed a depreciation of around –9% against the dollar. Following behind it was the Brazilian real (–5.8%) and the Colombian peso (–5.4%). 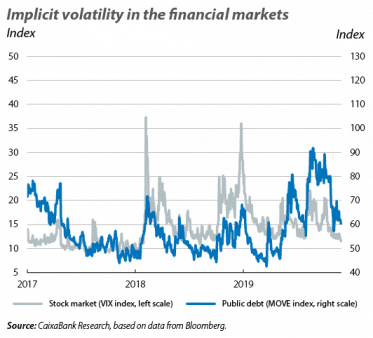 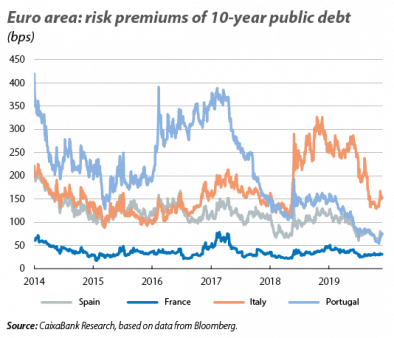