The necessary move towards a green financial sector

Thanks to the growing, and necessary, interest in the climate emergency, more and more studies are being published on the impact that this challenge will have on the economy. In fact, there is already a consensus that characterises the climate emergency as big, non-linear and uncertain. It is «big» because of the disruptive effects it will have on the productive model, either due to the physical risks it entails or those related to the transition.1 It is «non-linear» because, as the average temperature of the planet increases, certain natural phenomena accelerate, such as the melting of the polar ice caps, which will further accentuate global warming, thereby exponentially increasing the frequency and violence of extreme natural events. Finally, it is «uncertain» because there are no historical precedents for such a high concentration of greenhouse gases as we have today that can help us to make precise forecasts of the consequences it will have.

The magnitude and uncertainty of the economic impact of the climate emergency is perfectly illustrated when we look at potentially stranded assets, which are primarily exposed to transition risks. The best example of such assets is the reserves of fossil fuels that have not yet been extracted, a significant portion of which should be left underground if we are to achieve the targets of the Paris agreement. There are various methods for estimating the impact of these assets on global wealth. While some studies focus on the total volume of reserves that should remain underground, others focus on the value of the investments already made to extract the fuel in question or the net present value of the revenues from these reserves. Thus, some estimates suggest that the impact of such a decision on global wealth would amount to between 1 and 4 trillion dollars, while others place it at 18 trillion dollars (approximately 15 times the annual GDP of Spain).2 Like we said, a big and uncertain impact.

The financial sector will be affected by the climate emergency, although it can also help to mitigate it

In view of the potential impact of the climate emergency on the economy, the financial sector will need to incorporate climate risks into the comprehensive risk management associated with its activities (operational, credit, reputation or market risks). Take, for example, the case of a company with potentially stranded assets. In the event that a regulation limiting the extraction of these assets were to enter into force, the valuation of that company would fall, as would its ability to service its debt payments. As such, any banks that had offered this company financing would be exposed to a credit risk due to the borrower’s reduced solvency. Also, since these companies often use their assets as collateral when obtaining funding, upon executing the guarantees the bank would receive an asset that has no value, so it would also be exposed to market risk. The Bank of Spain estimates that up to 25% of the corporate debt held by Spanish banks is in sectors that are potentially vulnerable to these transition risks.3

On the other hand, the climate emergency also represents a major opportunity for the financial sector. The capital requirements of activities that help to mitigate and adapt to climate change are substantial and are unlikely to be met with public funds. The role that the private sector can play is therefore key. In this regard, the banks, as intermediaries between savings and investment, are in a prime position to channel capital flows into «green» projects. Nevertheless, distinguishing between sustainable and harmful projects requires international standards. To address this, as part of the Green Deal the European Commission has approved the long-awaited taxonomy which can be used to determine which projects are green and thus facilitate the flow of capital towards an economy that is neutral in greenhouse gas emissions.

The EU taxonomy and the next steps

In this proposal, the EU proposes considering an activity as sustainable if, at a minimum, (i) it contributes substantially to one of the six environmental objectives specified in the second chart, (ii) it does not significantly harm any of these objectives, (iii) it fulfils certain social guarantees and (iv) its contribution is technically verifiable. Thus, a set of metrics have been determined for each economic sector, so that companies and investors can estimate what percentage of their activity or assets are green.

Four types of activities that can be considered green will be distinguished: (i) those that are already low-emission (such as clean energy generation), (ii) the enablers (such as the manufacture of solar panel components), (iii) transition activities (those with a level of greenhouse gas emissions below their industry average, such as electricity generation using natural gas) and (iv) those aimed at adapting to the physical risks.

This «new common language» will avoid the use of divergent criteria when determining whether or not an activity is green. At the same time, it will combat the practice of greenwashing by companies and investors seeking to improve their reputation by engaging in activities which appear sustainable a priori but which, in the end, do not represent a real improvement in the environment. It will also open up a number of channels that can provide a boost to the transition towards a climate-neutral economy, such as:

• The publication of the type of activities being financed: the EU will require financial institutions to publish, for each financial product, the proportion of green activities being financed.4 Furthermore, large corporations that are already subject to non-financial disclosure requirements will have to report information regarding the new taxonomy. Thus, both investors and consumers will be able to know how polluting a company is or what verifiable actions they are taking to offset their carbon footprint.

• Incentivising the financing of green projects: once green activities can be distinguished from the rest, the respective financing costs could be influenced (for instance, by offering guarantees that reduce the cost of green projects). Some of the tools that have been proposed include the green supporting factor and the brown penalising factor, which would need to be subtracted or added, respectively, from or to the minimum capital requirements applicable to financial institutions. That said, it does not seem desirable to use banks’ capital requirements for a purpose unrelated to absorbing potential losses.

To further reduce greenhouse gas emissions, it is necessary to be able to classify the most polluting activities as «brown» and to differentiate them from those that are simply not green, thus creating three groups of assets and activities: green, neutral and brown. However, the current proposal does not yet offer any tools to do so. Moreover, there is still some way to go in the identification of climate risks. Moving towards better detection and quantification of the physical and transition risks that will affect the various economic sectors is key for financial institutions to be able to make better-informed decisions based on international standards. Thus, once the climate risks have been quantified, stress tests can be carried out to see how resistant the financial sector (and all other sectors) is to the various environmental scenarios.

The mandate of the central banks focuses primarily on price stability, and the climate emergency certainly has an impact on prices. However, the direction that prices will take as a result of climate factors is far from clear, as there are demand and supply forces driving them up and down.5 For this reason, and because of their implications for financial stability risks, central banks are beginning to take action in order to better understand the impact of the climate emergency and to clarify whether they need to include environmental sustainability in their mandates in order to avoid a scenario that would be disruptive to economic growth and would generate sudden price fluctuations.

In this regard, drawing on the strategic review currently being undertaken by both the ECB and the Fed,6 voices have been raised proposing that the central banks purchase green assets (green QE). However, this measure is somewhat controversial given that, strictly speaking, the transition towards a climate-neutral economy is not yet within the mandate of the monetary authorities. Moreover, one of the main features of the ECB’s purchases of corporate assets at present is precisely its neutrality with respect to the various economic sectors in order to avoid price distortions.

In short, monetary policy can at best aspire to complement and accompany whatever regulations are established by the authorities responsible for setting the course of the environmental transition.

3. This article does not take into account companies individually; rather they are aggregated by sector. See M. Delgado (2019). «Energy transition and financial stability. Implications for the Spanish deposit-taking institutions». Financial Stability Review (Autumn edition).

5. In a disruptive scenario in which extreme natural events occur more frequently and are more violent, we can assume that there will be a supply shock that will drive prices up. In other scenarios involving a reduction in economic growth, meanwhile, prices would tend to fall. See P. Bolton et al. (2020). «The Green swan – Central banking and financial stability in the age of climate change», BIS and Bank of France. Also, C. Alestra et al. (2017). «Long-term growth impact of climate change and policies: the Advanced Climate Change Long-term (ACCL) scenario building model», Bank of France. 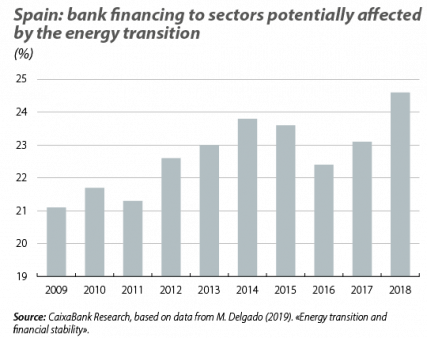 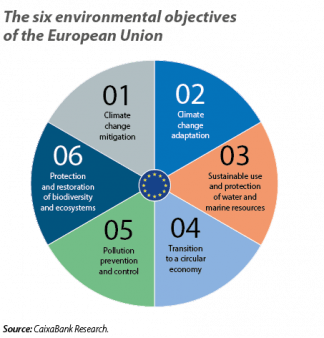 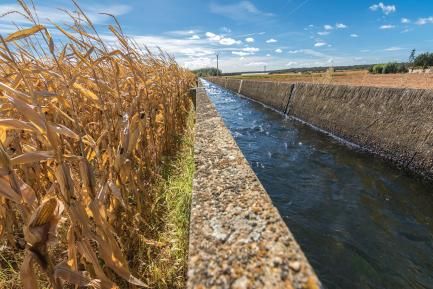