The prospects for bank deleveraging in Europe

The process of banks reducing their level of indebtedness, or deleveraging, which entails increasing capital and reducing assets, is inevitable after a credit boom. Although painful, it is necessary to correct the imbalances accumulated during the expansionary phase and to put the banking sector back on a firm footing. However, this process can have extremely damaging consequences for the economy depending on how it is carried out. Of particular concern is the possibility of a sharp contraction in credit supply, the much feared credit crunch. Europe is currently immersed in such a dilemma and that is why authorities are becoming wary of this deleveraging process and are keeping a close eye on the process.

The pressures on Europe's banking system to reduce their indebtedness come from different angles: the need to reduce its overreliance on short-term wholesale funding; liquidity tensions, further aggravated by the sovereign debt crisis; tougher regulatory requirements in terms of liquidity and capital; and also the reduction in the capital base due to assets losing quality.

Given such pressures, there is a range of options open to banks to improve their leverage ratio. On the one hand, they can increase their capital base, either by issuing more shares or by retaining earnings. They can also increase their reliance on relatively stable sources of funding, such as deposits or longer-term wholesale debt. Lastly, another alternative is to reduce their assets. This can be done in various ways: by selling off noncore lines of business or assets (often abroad); selling liquid assets (such as debt); reducing the balance of doubtful assets; and, lastly, reducing the loan portfolio. In turn, this reduction could result from the deleveraging of companies and households or, the least desirable option of all, from squeezing credit.

In the last few years, Europe's banking system has mainly opted to increase its capital, and very significantly. Between 2008 and 2011, equity rose by around 400 billion euros while the volume of assets remained practically stable. In addition, as a result of the European Banking Authority's recapitalization exercise,(1) institutions have widened their capital base by a further 116 billion euros, approximately.

Nevertheless, some of these have also resorted to adjusting their assets to cover part of the capital deficit identified. The IMF has estimated that, between September 2011 and June 2012, a sample of 58 large European banks had reduced their volume of assets by around 450 billion euros. Most of these were noncore assets and less than half was due to a reduction in the loan portfolio (a large part of the impact on credit is related to meeting requirements associated with state aid).

This all suggests, however, that the process of reducing European bank assets has not come to an end. The IMF, for example, estimates that, between mid-2012 and the end of 2013, they must still reduce assets totalling 1.7 trillion euros, approximately 6% of the total, in a baseline scenario in which the current policies continue (ECB support, implementation of banking union, etc.).(2) For its part, the ECB has examined the business plans of the largest European institutions and calculates that the expected reduction in assets for 2012 and 2013 totals 1.5 trillion euros (1.2 trillion for banks in the euro area). Most of these reductions are expected to come from corporate and investment banking portfolios and, to a far lesser extent, from retail banking.

In any case, the uncertainty regarding these estimates is high and several factors might affect the speed and intensity of the deleveraging process over the coming years. These include: the degree of economic activity, a key element for bank profit; how the European debt crisis develops; the implementation of the new capital regulations (Basel III) and the development of new liquidity requirements. In general, a lot will depend on the economic and financial policies adopted, both at a national and particularly a European level. In this respect, the IMF has warned that, in a scenario in which banking union is delayed and no progress is made towards creating a supranational bank bail-out mechanism and European deposit guarantee scheme, there will be even more pressure to reduce assets. In that case, the reduction might reach 3 trillion euros, more than 10% of total assets. However, in a scenario of more ambitious policies than the baseline scenario, targeted towards a greater drop in risk premia and towards reversing the fragmentation of national financial systems, the reduction in assets forecast would be 1.4 trillion euros (less than 5% of the total assets).

A relatively fast and disorderly process of asset reduction runs the risk of seriously damaging economic activity. In particular, there are two categories of assets that could suffer from sharp cutbacks within a short period of time: credit to firms and credit for financing international trade. Both categories are extremely important in order for the economy to function normally. Of particular concern is the impact on credit to SMEs due to their huge dependence on bank loans. Regarding credit for international trade, it should be noted that one third of the world's supply comes from European institutions.

In order for the deleveraging process to be carried out in a measured way, without suffocating economic activity, it is vital to underpin confidence in Europe's banking systems and in the governments that accommodate them. Among other measures, this will require resolute progress to be made in the reforms currently being undertaken by the monetary union, both at a national and European level (see the box «Euro area: seventeen countries, one destination»). There is no doubt that the price of not doing so would be very high, and Europe cannot afford it.

(1) In September 2011, the European Banking Authority increased the minimum Core Tier 1 for 71 systemic banks to 9%, as well as requiring a buffer for exposure to periphery sovereign debt. This requirement had to be met by June 2012.

This box was prepared by Pilar Buil 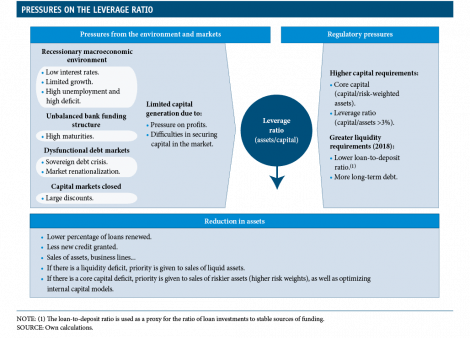