What does the quantitative tightening (QT) which the Fed is going to carry out in its monetary-policy normalisation process involve? How could it impact the financial markets? 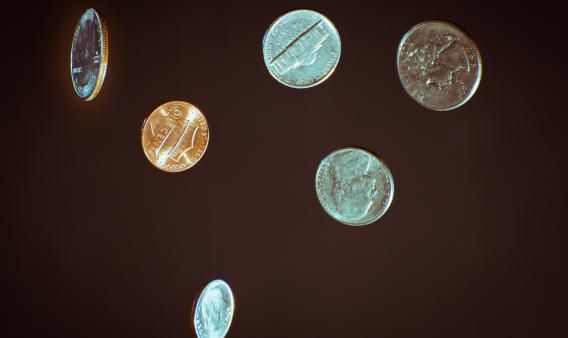 In the face of the intensification of inflationary pressures in recent months, the central banks have responded by bringing forward their monetary stimulus withdrawal strategies, first by ending net asset purchases and, more recently in most cases, by raising official rates. In this article, we focus on the next step in this monetary policy normalisation process: reducing the size of their balance sheets, or quantitative tightening (QT), as it is known.

QT is a restrictive monetary policy measure whereby central banks place back into the markets the financial assets that they acquired under their purchasing programmes during the monetary expansion phase (bonds, securities and, in some cases, equities).

At the operational level, central banks can execute QT by not reinvesting the bonds in their portfolio that mature, or, if they want to accelerate the reduction of their balance sheet, they can sell the assets they hold back to the markets at a pre-determined monthly rate. To date, only the Fed has carried out a QT process, specifically in the period 2017-2019. 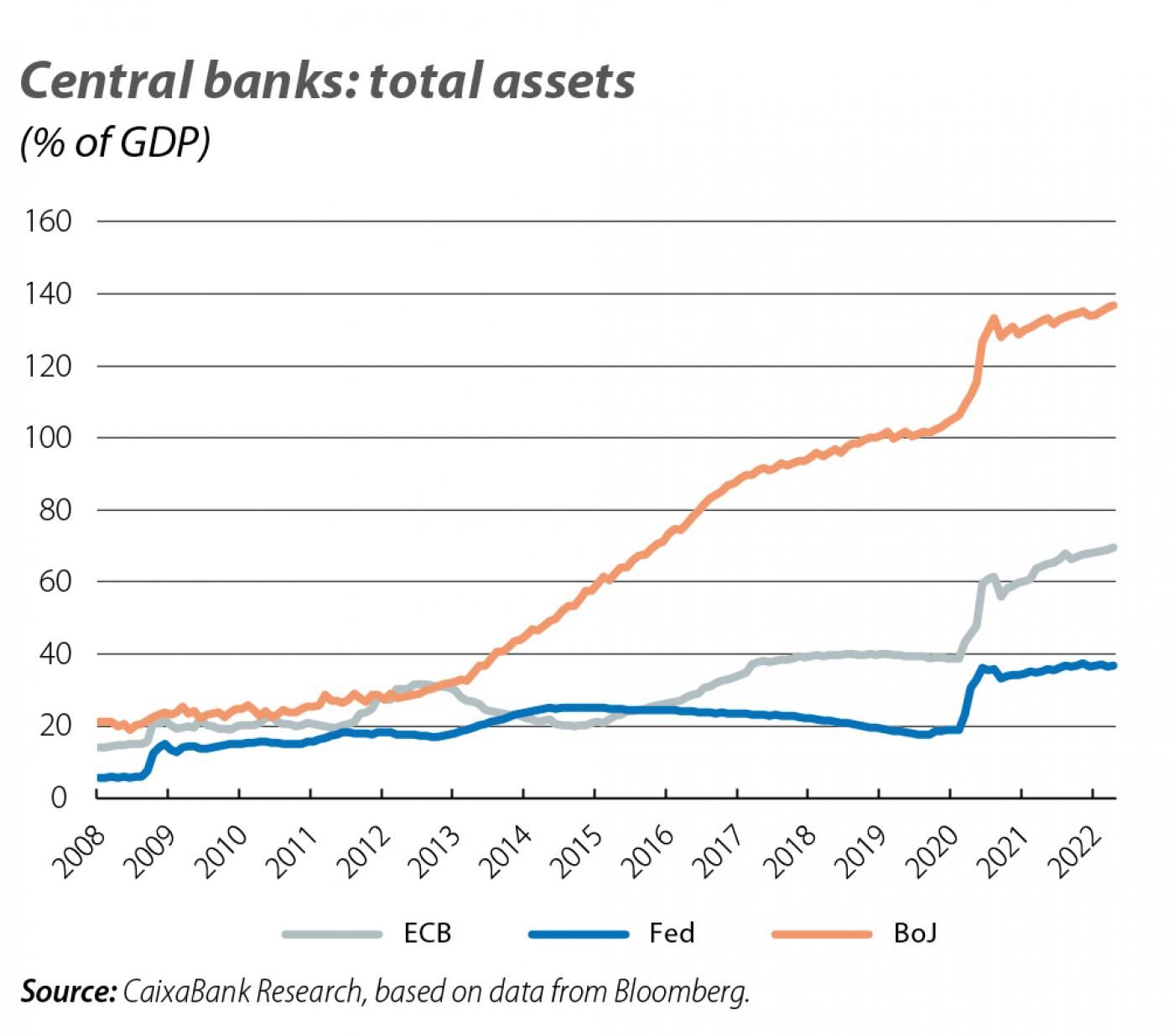 The Fed announces an aggressive QT in 2022

With total assets of 8.9 trillion dollars at the end of April, representing 37% of US GDP, at its May meeting the Fed confirmed its strategy to reduce the size of its balance sheet.

The announcement of this QT has come much earlier in the monetary normalisation process than in the previous cycle, when the Fed waited two years after the first official rate hike (December 2015) before initiating QT (autumn 2017). Also, the pace of the reduction is much more aggressive this time: in 2017, the Fed set a monthly cap of 50 billion dollars, although in practice the initial pace was closer to 10 billion.

With regard to government bonds, the Fed recently stated that in the months when maturities fall below the cap, it will make up for the difference by shrinking its portfolio of Treasury notes. However, at least during 2022, Treasury bond maturities will exceed the limit every month, implying not only that the Fed will not actively sell notes, but also that it will have to reinvest some of the assets at maturity (see second chart). As for the MBS portfolio, it is highly likely that the limit set for its reduction will not be initially reached, as most of the maturities are more than a year away. 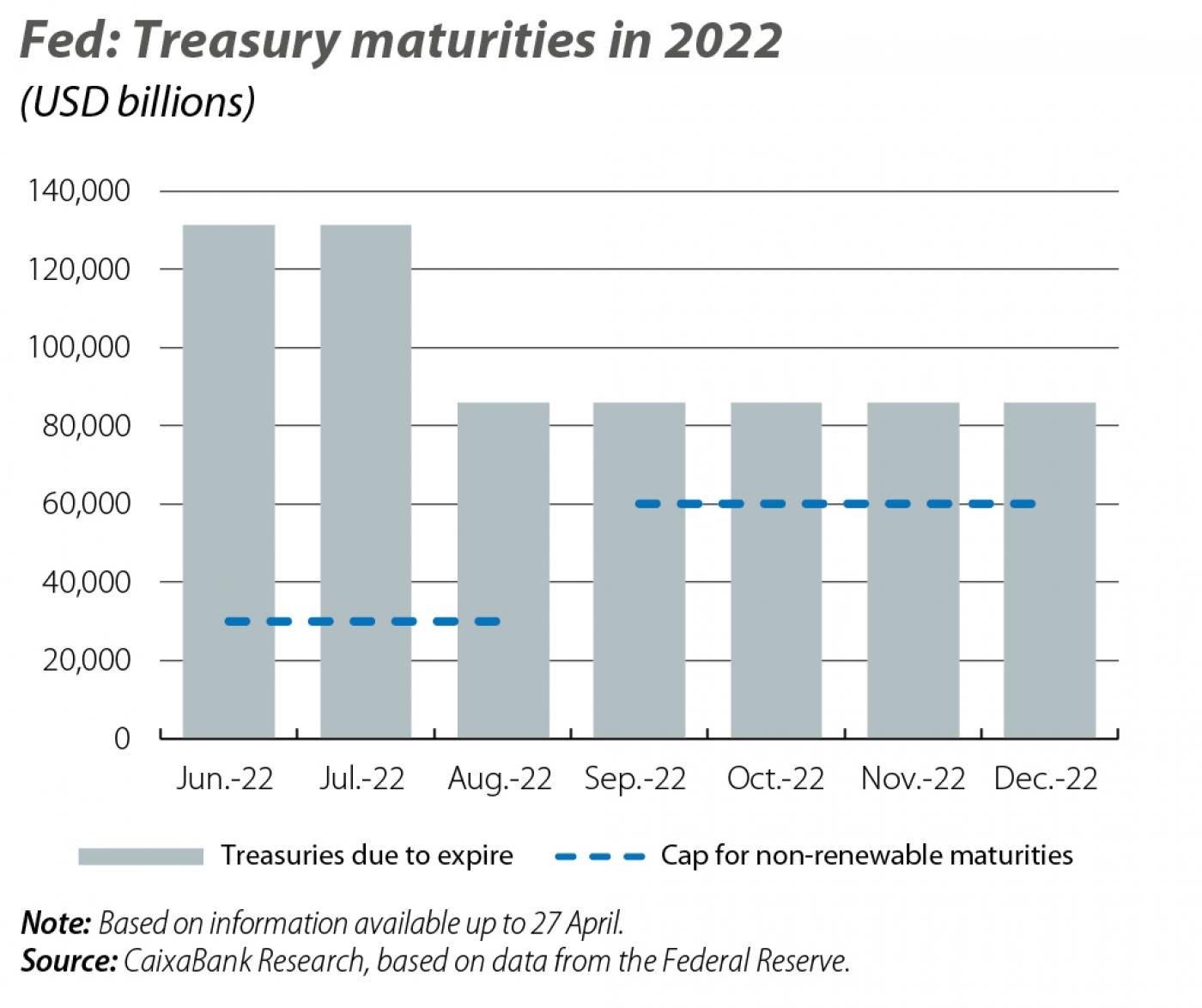 How does QT impact the financial markets?

Given the unusual nature of this policy, there is no consensus on the potential impact that QT could have on financial markets and on the real economy.

In practical terms, QT means less liquidity in the financial system, due to a reduction in bank reserves held by the central bank, as it will be banks, among other financial institutions, that will increase the most their exposure to the assets that are sold off by the Fed. Thus, to the extent that a significant portion of the demand for these assets (that of the central bank) is reduced, their interest rate will rise, such that QT ends up operating in a similar way to other monetary-tightening measures.

With regard to the impact on the financial markets, the QT process would first exert upward pressure on the yields of the affected assets, namely government and private bonds, which would see their prices fall (and their interest rates increase) in the face of the higher net supply. This impact tends to be most pronounced in the middle and long end of the curve, as the central bank tends to concentrate bond purchases in that section of the curve. This increase in the reference rates would usually have a negative impact on equities and corporate spreads, while strengthening the dollar (see what happened following the QT announcement in 2017 in the last chart). However, the scale and persistence of this impact are difficult to quantify, given the wide range of factors built into financial asset prices. 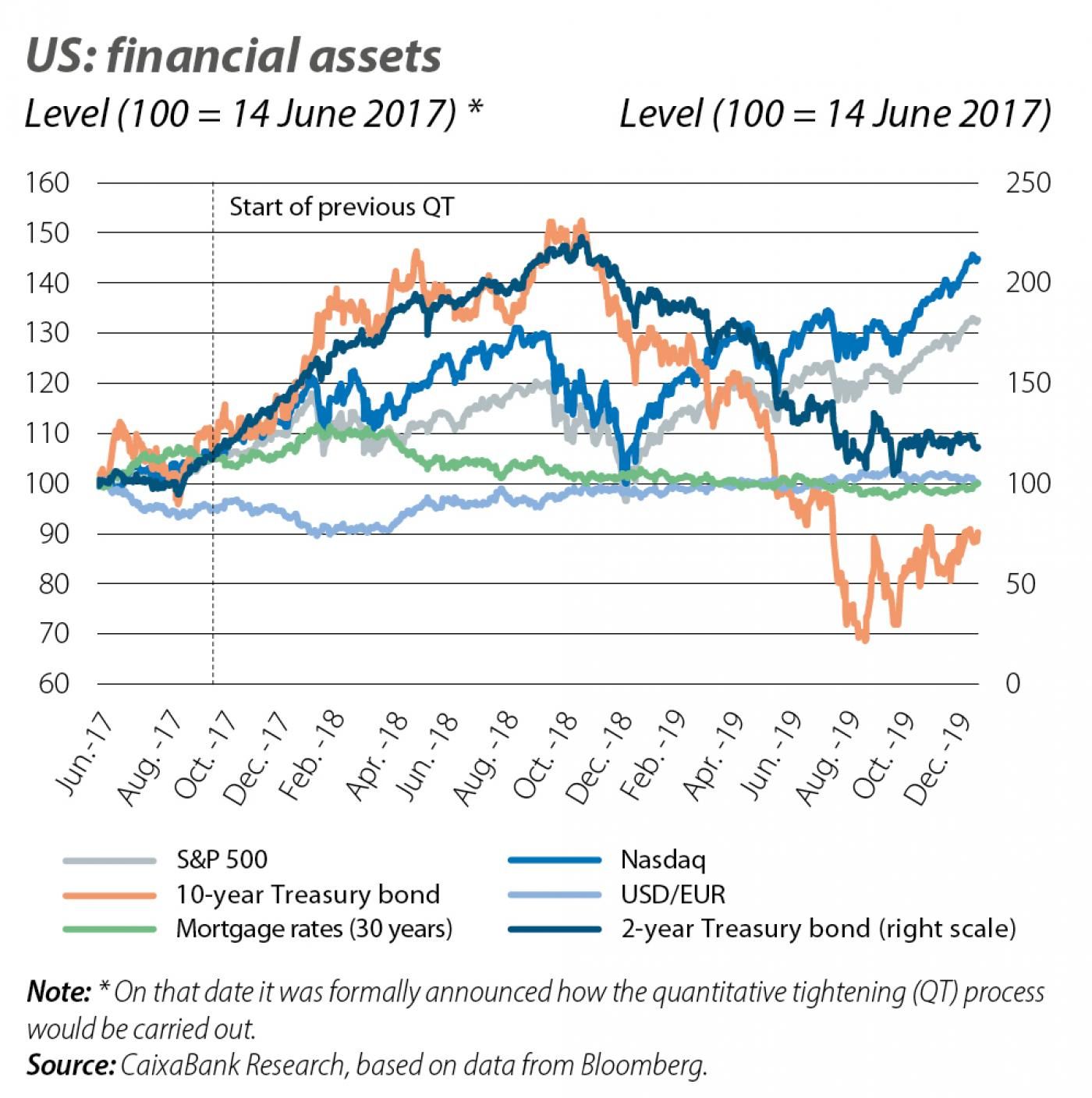 In the current cycle, the QT announcement has intensified the recent rise in sovereign debt yields,2 as well as increasing volatility in equity markets. On the other hand, the dollar has been further strengthened, appreciating 7% against the euro since the beginning of the year. We believe that some of the impact of the QT on the markets is likely to have already occurred, as the Fed had announced the broad outlines of the plan already back in January. Nevertheless, we do not rule out the possibility of new episodes of volatility, once the QT materialises beginning in June.

How does the Fed compare with other central banks?

The balance sheet reduction process is not unique to the US, as other central banks are already engaged in this process. For instance, the Bank of England has been allowing assets to mature since February, and since May it has been actively selling part of its corporate bond portfolio, while it is also due to set out its plans for government bond sales in the summer. The central banks of Canada and Australia are also letting assets expire at maturity, while Sweden’s Riksbank expects to begin this process in the coming months.

The situation at the ECB, in contrast, is somewhat different. According to its official communications, up until the end of 2024 the ECB will reinvest the assets of the PEPP at maturity and those of the APP for a prolonged period following the first rate hike (which implies that QT could occur approximately two years from now). The fact is that if the ECB were to disappear from the debt markets, the risk of financial fragmentation in the euro area would be by no means negligible. For this reason, in addition to continuing to reinvest assets at maturity for a few years to come, the ECB is likely to allow some flexibility in these reinvestments in order to ease any asymmetric financial tensions arising between the different economies. 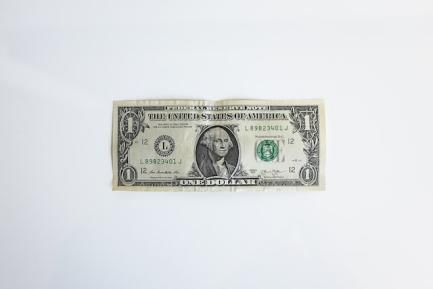 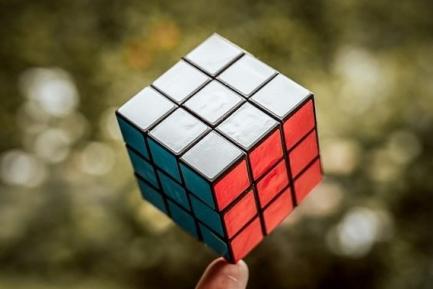