Reducing the high stock of Spanish public debt will take time, but in today’s economic context there are factors that could help to make the digestion process more bearable than these astronomical figures (1.34 trillion euros in 2020) might suggest. 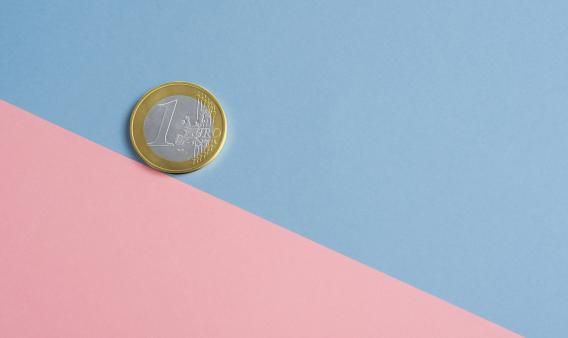 Spain’s public debt reached 1.34 trillion euros in 2020. This represents a 24.5-pp rise as a proportion of GDP compared to 2019, bringing the figure to 120%. This is an inevitable increase given the fall in GDP and the high levels of public expenditure that have been needed to soften the blow of the pandemic – indeed, the public deficit in 2020 was 10.1% without financial aid to Sareb – but it leaves a bill that will be difficult to digest.

Reducing such a high stock of debt will take time, but in today’s economic context there are factors that could help to make the digestion process more bearable than these astronomical figures might suggest.

Firstly, the fall in interest rates (the average cost of government debt ended 2020 at 1.86%, –0.33 pps compared to 2019) and the lengthening of maturities have thrown the economy a major lifeline to help ease the burden of the debt. In particular, the interest bill has followed a clear downward trend and stood at 2.2% of GDP in 2020. This trend should continue over the coming years, as interest rates remain low and as the debt that was issued years ago at higher rates matures. The government’s forecasts place the interest bill at 1.8% of GDP in 2023. 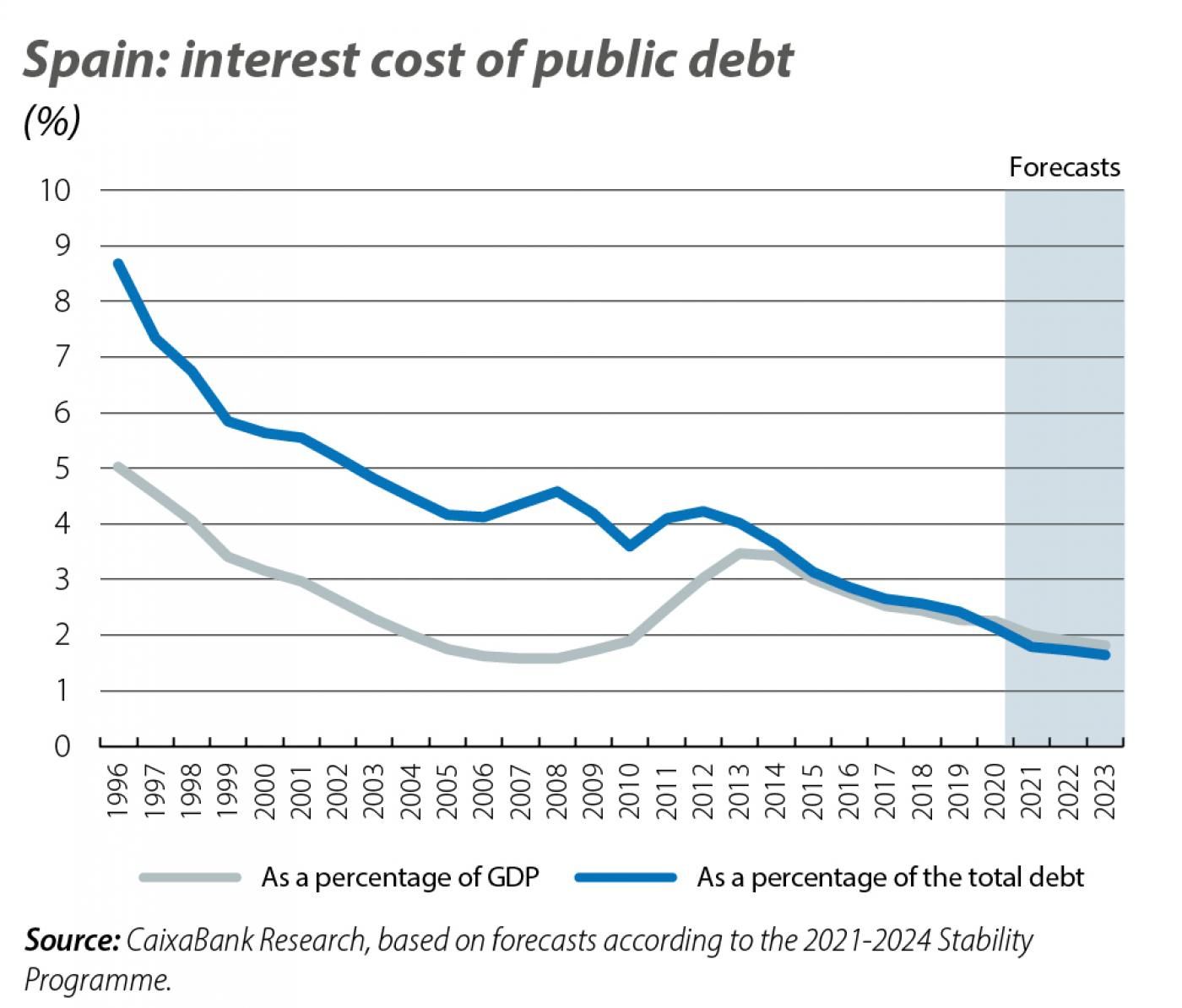 Secondly, the ECB’s asset purchase programmes have acquired high volumes of Spanish debt in the secondary markets. These purchases were intensified in 2020 with the launch of the Pandemic Emergency Purchase Programme (PEPP), resulting in the ECB’s net purchases of Spanish debt (some 120 billion euros) equating to just over 100% of net financing requirements (109.9 billion euros). Thus, at the end of 2020, public debt held by the Eurosystem represented 37% of GDP, leaving the equivalent of 83% of GDP in the hands of other investors.

Finally, a successful execution of the NGEU programme in the coming years, channelled into the areas that will be most productive and transformational for the economy, would enable a sustained increase in Spain’s potential growth, and this in turn could accelerate the reduction of public debt in terms of GDP.

For illustrative purposes, we have analysed how Spain’s public debt will reduce between now and 2031, based on an average primary balance in the next decade in line with the one between 2015 and 2019 (–0.2% of GDP, adjusting for the business cycle), when Spain consolidated its last economic recovery. In this exercise we maintain a low-interest-rate environment like the current one, and we assume stable nominal growth in line with the IMF’s long-term forecast (3.1%). The results show that the debt would be reduced to 108% of GDP in 2031 (or 114% if the cost of debt were to evolve according to five-year market rate expectations).1

Indeed, the most effective and painless way to reduce public debt is to combine a gradual rebalancing of the public accounts – to avoid eroding the economy’s growth capacity – with high and sustained economic growth. An illustrative example of the power of growth is the period 1996-2007, during which high growth (nominal annual growth of 7.4% on average) allowed Spain’s public debt to fall by almost 30 pps without spending cuts or major tax increases. In particular, if the average nominal growth of the economy over the next 10 years were 1 pp higher than the IMF’s long-term forecast (4.1% instead of 3.1%) and the primary deficit followed a pattern like that of 2015-2019, then public debt would reach 98% of GDP in 2031, assuming the current interest-rate environment were maintained (104% if the cost of debt evolves in accordance with 5-year market expectation rates). This is only slightly above the pre-pandemic ratio, hence the importance of making the most of NGEU to achieve high growth that is also balanced and sustainable.

Finally, much has been said about the important confidence effect of the ECB being one of the main holders of public debt. Will this effect continue in the coming years? What will happen from March 2022, when net purchases under the PEPP are scheduled to come to an end? In the last chart, we show the fluctuations of the net Spanish public debt of Eurosystem holdings in 2021-2025 in three different scenarios: the baseline scenario,2 a scenario in which net purchases are withdrawn earlier than expected by the market,3 and a third scenario with increased stimuli.4 As we can see, in all three scenarios the net public debt of these holdings would lie below 80% of GDP, largely thanks to the significant role of reinvestment of the principal at maturity. Thus, the ECB will continue to be a major holder of Spanish public debt for many years to come, and this will not vary substantially with adjustments to its net purchase programmes over the coming years.

In short, the sustainability of public debt is not compromised thanks to a favourable macro-financial environment low interest rates, long maturities and support from the ECB. However, in case this exceptionally favourable environment does not last forever, it will be essential to achieve buoyant, sustainable and lasting growth that will ensure that digesting the public debt is bearable. 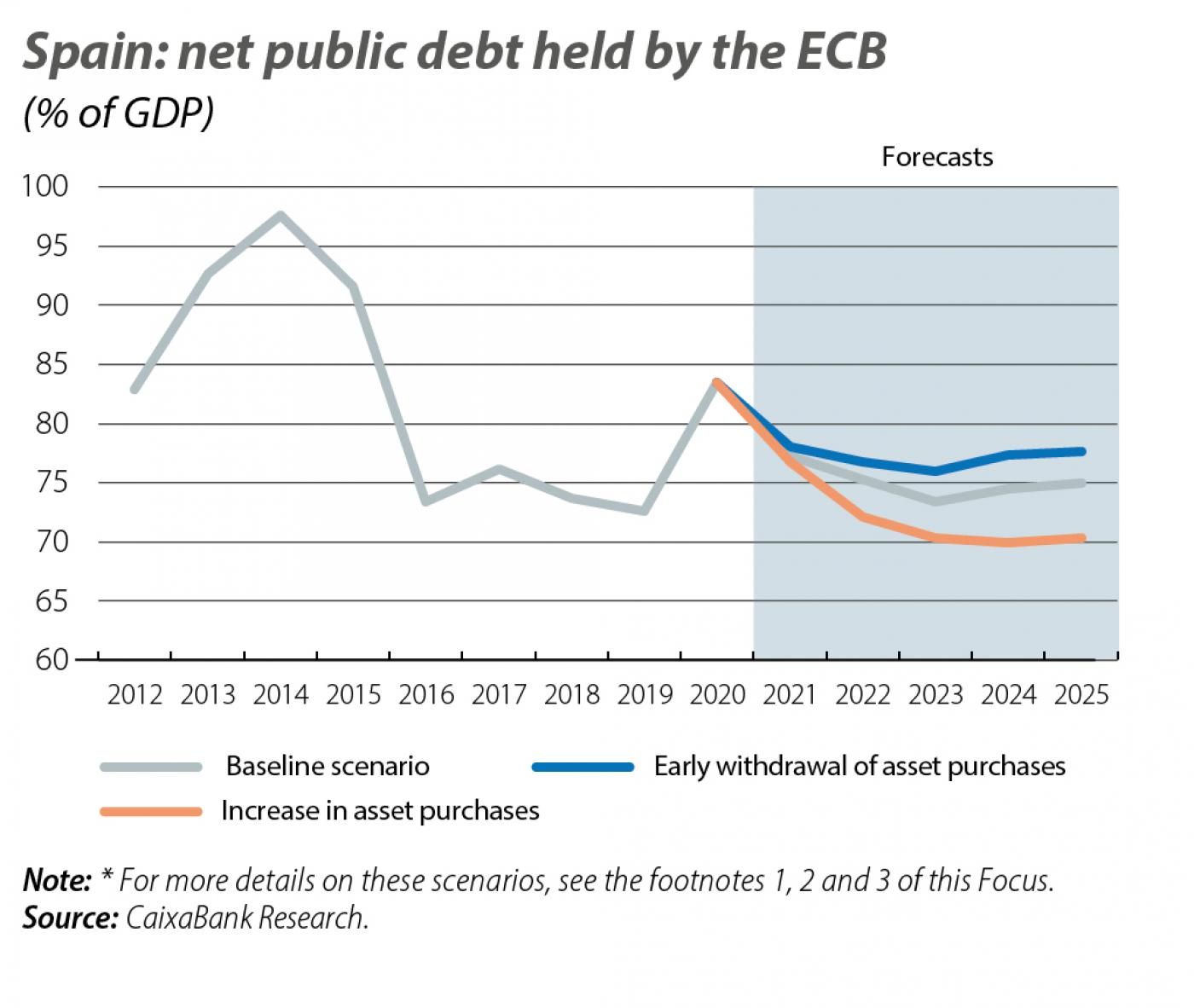