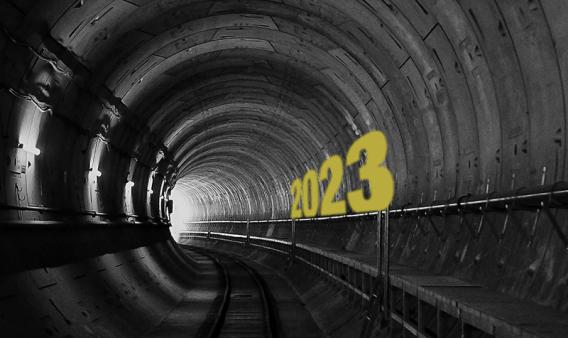 Indeed, as of early November, advanced-country central banks have, on average, approved official rate hikes of around 300 bps, marking the most aggressive adjustment since the 1980s and far exceeding what the implicit rates in the financial markets were anticipating at the beginning of the year (see first chart). The central banks have also agreed on an end to their net asset purchase programmes, and in some countries, such as the US, they have even embarked on the process of reducing the size of their balance sheets. As a result, financial conditions have tightened, which has been reflected in historical declines in the main stock indices. 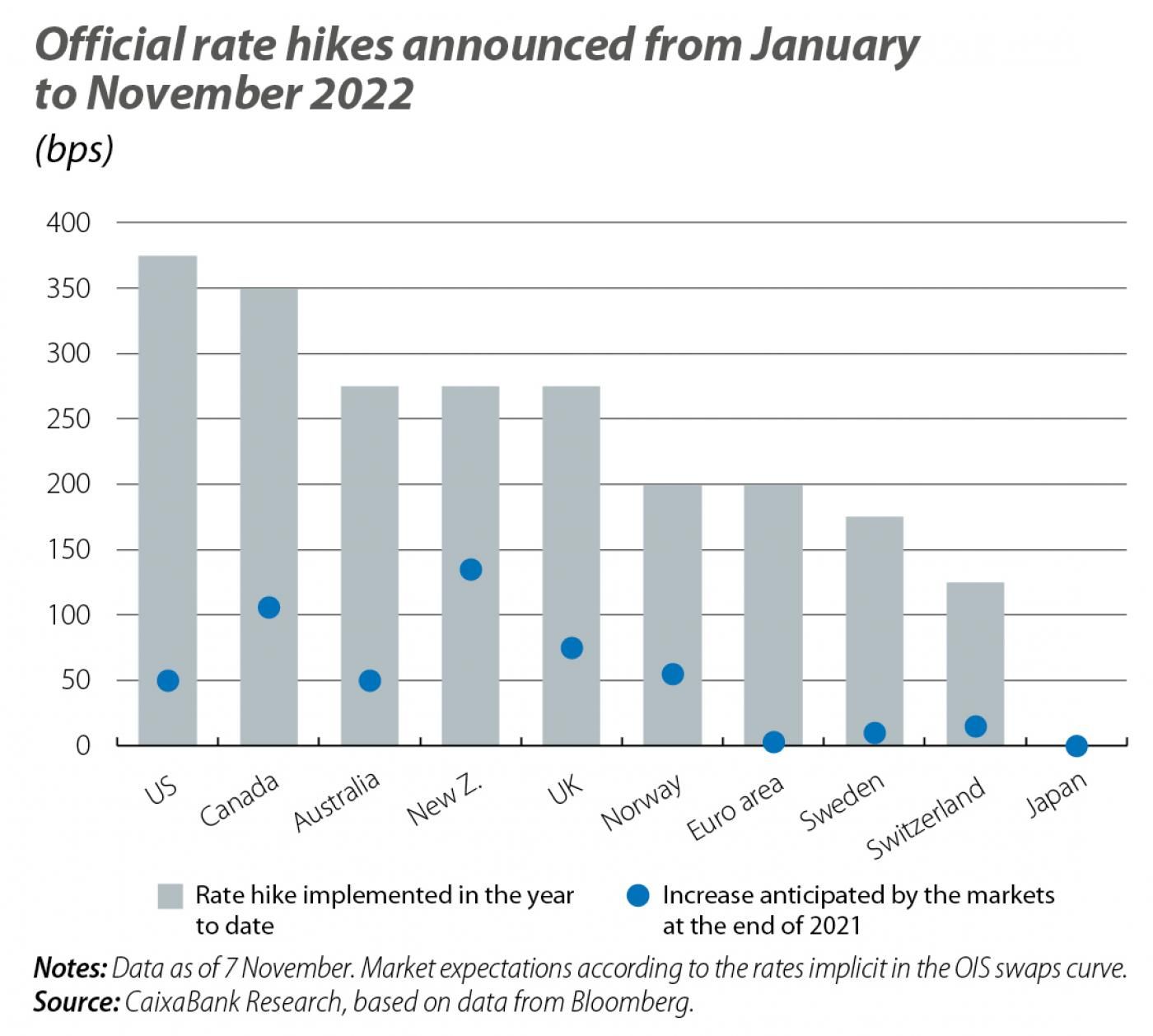 Peak in sight, but at what height?

Following a tumultuous 2022, investors are betting that the current episode of monetary tightening will peak sometime
in 2023.

Specifically, as of early November, the rates implicit in the markets were anticipating that official rates would peak this cycle in May in the case of the Fed and in September for the ECB, consistent with additional hikes of 125 bps to 5.0% and 150 bps to 3.0%, respectively. Even for the Bank of England, the official rate is expected to peak during the summer, at around 4.75%.

On the other hand, in the case of the Fed, the implicit rates were anticipating the first rate cuts beginning in September, while for the ECB rates are projected to stabilise in 2023, followed by modest cuts in 2024, in line with CaixaBank Research’s baseline forecasts. In both regions, however, it is important to note that the official rates are likely to remain in restrictive territory – i.e. above the level considered neutral (which neither stimulates nor contracts the economy) – at least until the end of 2025 (see second chart). That said, there is a great deal of uncertainty about where these structural levels may actually lie. 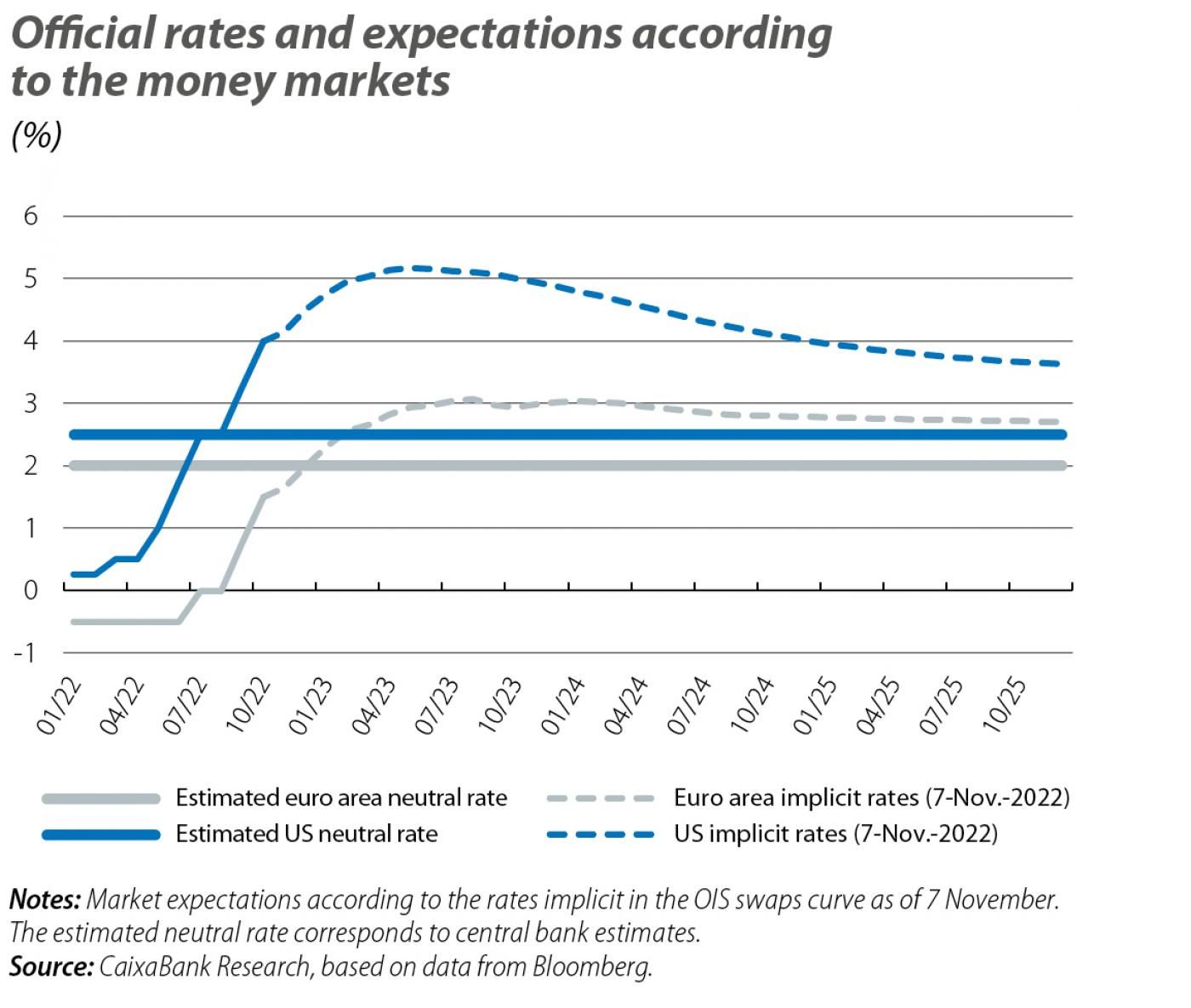 There are a number of factors which justify the expectations that the current cycle of rate hikes will end in 2023. Firstly, the effects of the monetary tightening introduced to date should become more palpable during the course of 2023, given that their impact on the economy is not immediate. Indeed, conventional econometric models estimate that a 100-bp rate hike in the euro area tends to be associated with a maximum impact on GDP after 12-24 months of between 0.7% and 0.9%.1 Thus, the magnitude of the rate hikes already implemented in 2022 implies that euro area GDP growth in 2023 will be 1.0 to 1.5 pps lower than that expected in the absence of monetary tightening.2 In any case, we must take these estimates with a large grain of salt, as they are historical averages and may not capture the uniqueness of the current context. For example, the higher share of new fixed-rate debt (82% in August 2022 for households in the euro area versus 57% in 2010) could mean that the increase in rates will have a smaller impact on the economy. However, the fact that the rate hike cycle has been so pronounced and unexpected, and the starting point so low, could amplify its adverse impact on growth.

Secondly, we do not believe that fiscal policy can, or should, compensate for monetary tightening, in a context of high public debt and higher financing costs. After all, pivoting to an excessively expansionary fiscal policy would likely be punished by the markets with more aggressive rate hikes, raising the risk of a resurgence of fears about the sustainability of public finances, as we saw in the United Kingdom in October.

The interaction of these elements, combined with other headwinds, explains our expectations of a sharp slowdown in the global economy next year, with below-potential growth in most countries. The resulting slowdown in the labour markets, as well as the reduction in inflation expectations, will help limit the risk of second-round effects on inflation and allow for a less reactive stance from the central banks.

As for the supply-side factors that lie behind the current high inflation, with the exception of the maintenance of zero-COVID policies in China endorsed at the recent Communist Party Congress, the disruptions to global supply chains seen throughout the pandemic are likely to continue to moderate. On the other hand, despite the high uncertainty surrounding the future of the war between Ukraine and Russia, the combination of less buoyant demand and the implementation of various containment measures3 will likely pave the way for a relaxation of commodity prices over the next year, as suggested by the futures markets.

Balance of risks: which way could we go wrong?

It should be noted that there are risks pointing both ways in terms of the direction which monetary policy might take in 2023. On the one hand, we have the risk of inflationary shocks, which could extend the upward pressure on prices and result in more restrictive measures by the central banks. These include a potential escalation of the conflict with Russia, as well as other geopolitical events or natural disasters related to climate change. We also do not rule out further second-round effects, either through higher and more persistent wage increases or due to stronger fiscal stimulus measures.

For illustrative purposes, in a scenario with commodity prices increasing around 50% more than in our central forecast, euro area inflation could remain at the current levels throughout 2023 and not fall back down to 2% until 2026 (we are currently forecasting that this will occur at the end of 2024). In such a scenario, it would not be unreasonable to expect the ECB to raise official rates to around 5%.

On the other hand, there is the risk of disinflationary shocks, such as a de-escalation in geopolitical tensions or a sharper than expected contraction in the economy, whether due to disruptions in the financial markets or any other systemic event. In the event of a geopolitical de-escalation, while we expect the medium-term effect would be less upward pressure on prices, in the short term the positive demand shock – triggered by reduced uncertainty and lower energy prices – would delay the drop in inflation. In this scenario, central banks could respond with additional rate hikes at the beginning of the year (possibly of around 50 additional bps) before initiating a downward cycle thereafter. In the event of a sharp contraction in the economy, however, we would expect central banks to respond by reintroducing monetary stimulus measures, such as net asset purchases in order to stabilise the markets, and possibly even official rate cuts.

2022 has been a year marked by high uncertainty surrounding the economic outlook, both due to the decoupling between supply and demand following the pandemic and due to the war in Ukraine. This has led to substantial forecast revisions, both in relation to inflation and growth and with regard to the response of the central banks. Looking ahead, the forecast for the economy that we can be most sure of right now is that uncertainty will remain high in 2023.