The stock market correction occurring on Wall Street between the end of January and mid-February spread like wildfire to the rest of the international markets. Emerging stock markets were no exception, dropping by almost 9% in cumulative terms during the episode. This article compares the trend of emerging markets in the current episode with their behaviour in other episodes triggered by S&P 500 stock market corrections to better gauge the financial strength of the emerging economies. These countries have recorded remarkable growth rates in recent years but also substantial foreign capital inflows.

To carry out this analysis, we identified the major stock market corrections over the past 20 years originating in the US. As can be seen in the first chart, emerging stock market losses, measured by the MSCI index, have been similar in magnitude to those suffered in other episodes whose trigger was also an initial correction in the US. However, the cumulative drop in emerging equity during the current episode, on aggregate, is very similar to the drop suffered by the S&P 500. This is unlike most previous episodes, when emerging losses were comparatively smaller. The S&P 500 correction between July and October 1999 was the most similar to the current episode as this was caused by international investors’ fears of a faster-than-expected fed funds rate hike due to inflationary pressures. Comparing these two episodes directly against a similar background, we can see that emerging equity markets have fallen more sharply in the current episode.

Finally, another factor that helps to assess the vulnerability of emerging markets to surprises in the US is their ability to react after a shock. Taking a broader time horizon, we can see that emerging stock markets have recovered pretty much in the same way as it did after the 1999 correction which, as we have already said, was due to similar causes. In fact, if this pattern continues, emerging stock markets should recoup their losses no later than four months after the start of the correction; in other words, by May or early June 2018.

The trend in the correlation between the MSCI index a nd the S&P 500 in the months following the 1999 shock also suggests the impact was temporary, given that the correlation between the two indices weakened noticeably as the months progressed. The question, however, is if the same trend will be observed in the coming months. This will depend largely on whether fears of increased protectionism and trade wars diminish and whether US monetary normalisation can be carried out gradually. 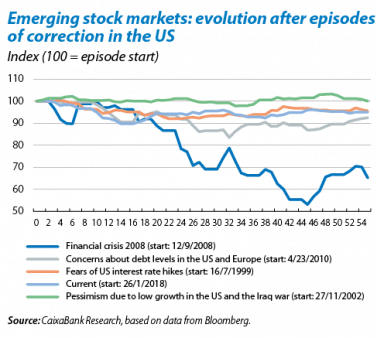