The energy crisis has led to an increase in energy prices which is not affecting all households alike, since their resources and initial situation are not the same in all cases. 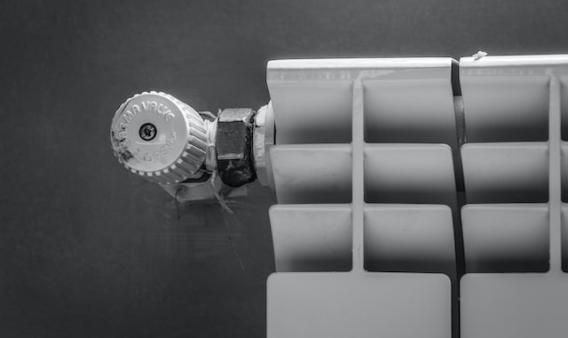 The energy crisis has led to an increase in energy prices which is not affecting all households alike, since their resources and initial situation are not the same in all cases. In this article, we analyse the level of energy poverty among European households and how the portion of household budgets spent on energy bills has increased in 2022.

A household is considered to be in a situation of energy poverty when it cannot meet all of its energy needs.1 This situation is not only price-dependent, but is the result of a combination of three factors: low income, high expenditure on energy services (relative to income), and low energy efficiency in homes. Thus, measuring the energy poverty of households is no easy task, as we need to analyse multiple elements and there is no single measure that summarises the situation. Two indicators from surveys of household living conditions which do a reasonable job of summarising the problem are households’ inability to keep their home adequately warm and delays in paying their energy bills.2 In the EU, 6.9% of households were unable to keep their homes at an adequate temperature in 2021 and 6.4% were late in paying their energy bills. However, there are significant differences in these two measures from country to country, and there is generally a higher percentage of households in difficulty in southern Europe (see first chart). 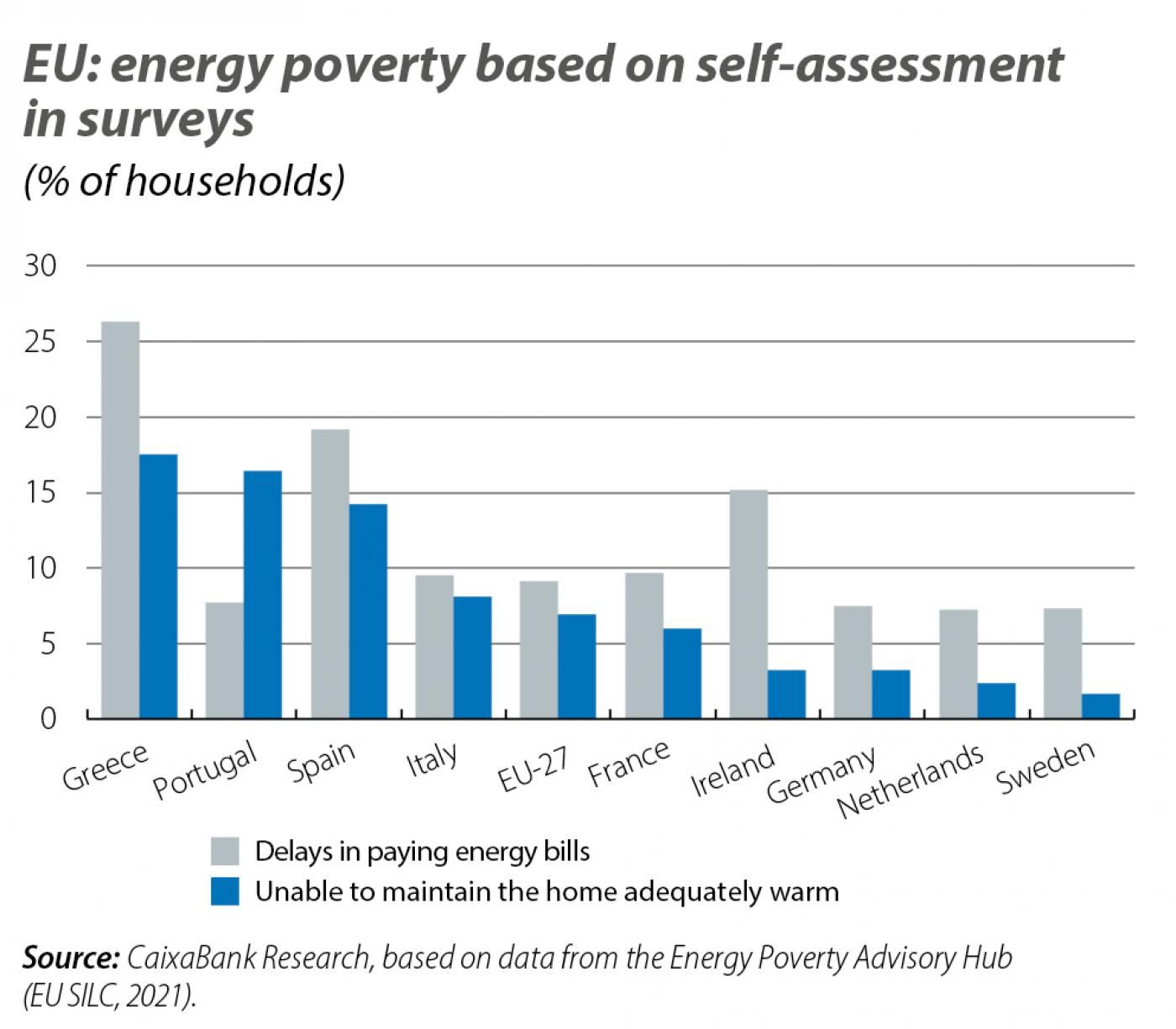 As we can see, energy poverty is a multidimensional phenomenon, so it is not easy to estimate how the current crisis is affecting each element. Measures such as the inability to keep the home adequately warm depend, above all, on the household already being in a precarious situation to begin with. Therefore, according to simulations by the European Commission,5 the rally in energy prices due to the current crisis is having a relatively small impact on this aspect. On the other hand, these higher prices are having a more substantial impact on the measures related to the level of expenditure.6 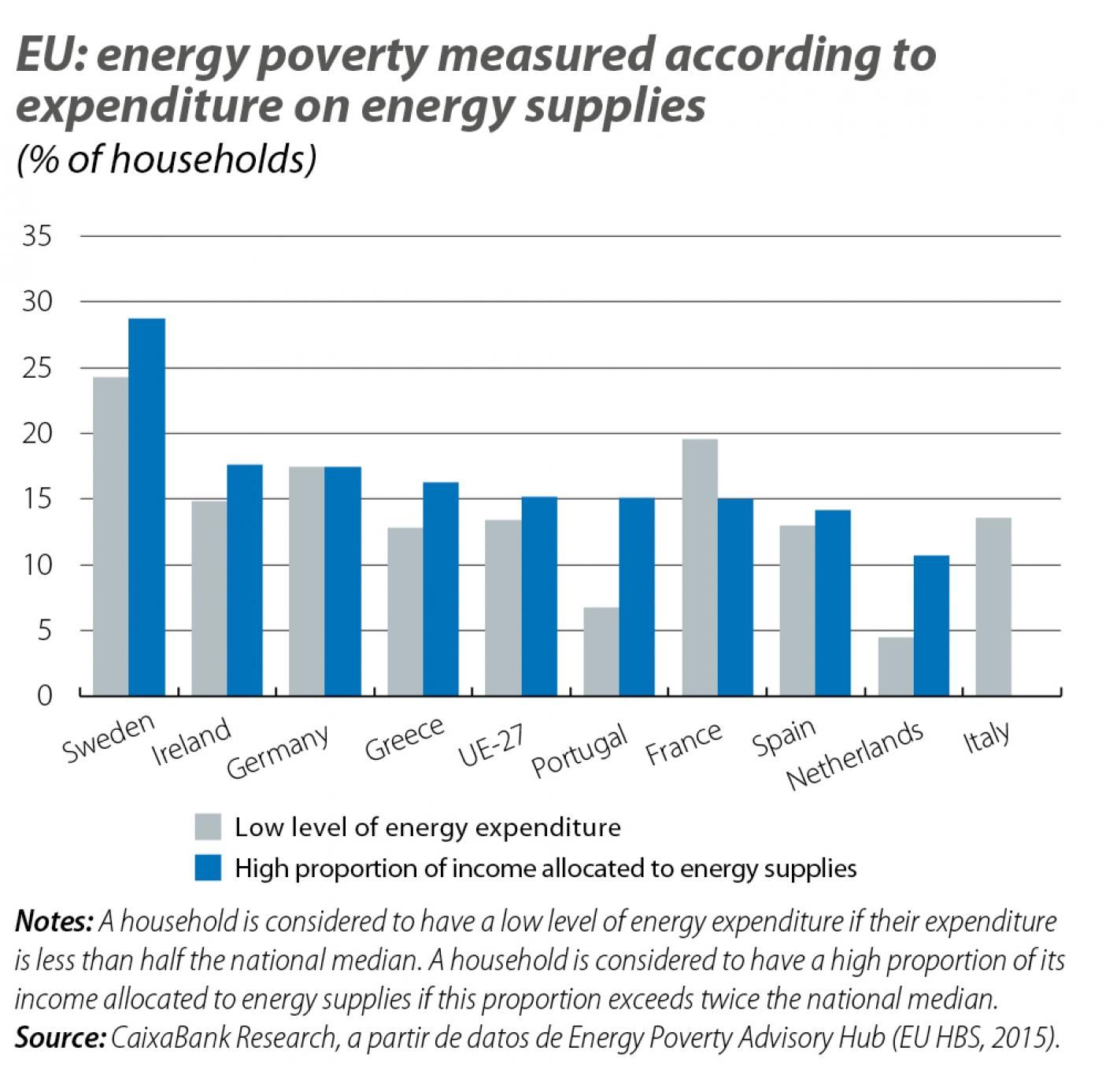 Energy bills are rising, but not equally in every country

We focus our analysis of the impact of rising energy bills on the euro area’s four major economies (Germany, France, Italy and Spain).7

For context, in 2020 households in France spent 4.8% of their income on energy bills, while in Germany the figure was 5.6% and in Italy and Spain, around 6.0%. From this starting point, energy prices have sky-rocketed (+72% increase since 2021), although the extent of the increase has been somewhat uneven between countries: up to September 2022, in France prices prices have risen by 40%; in Germany, by more than 60%; in Spain, by around 70%, while in Italy prices have almost doubled.8 This means that, in 2022, households’ annual energy bills have increased by an average of around 500 euros in France, some 800 euros in Spain, over 1,000 euros in Germany and around 1,400 euros in Italy. As such, households are having to allocate a significantly larger portion of their income to paying their energy bills. Moreover, the divergence between countries has widened significantly: French households are still the ones allocating the smallest portion to their energy bills, at 6.5% of their income, while in Germany they spend almost 9.0%, in Spain just over 10% and in Italy, more than 12%.9

These estimates show how, in all countries, households are having to allocate a greater portion of their income to cope with the increase in their energy bills. Lower-income households will have the greatest difficulties in paying their energy bills, so it is key that support measures are targeted in order to reach all these struggling households. This aid must also be accompanied by incentives for energy saving. In this regard, price signals remain an essential element for reducing demand as much as possible and for encouraging European households to save energy in the bleak midwinter. 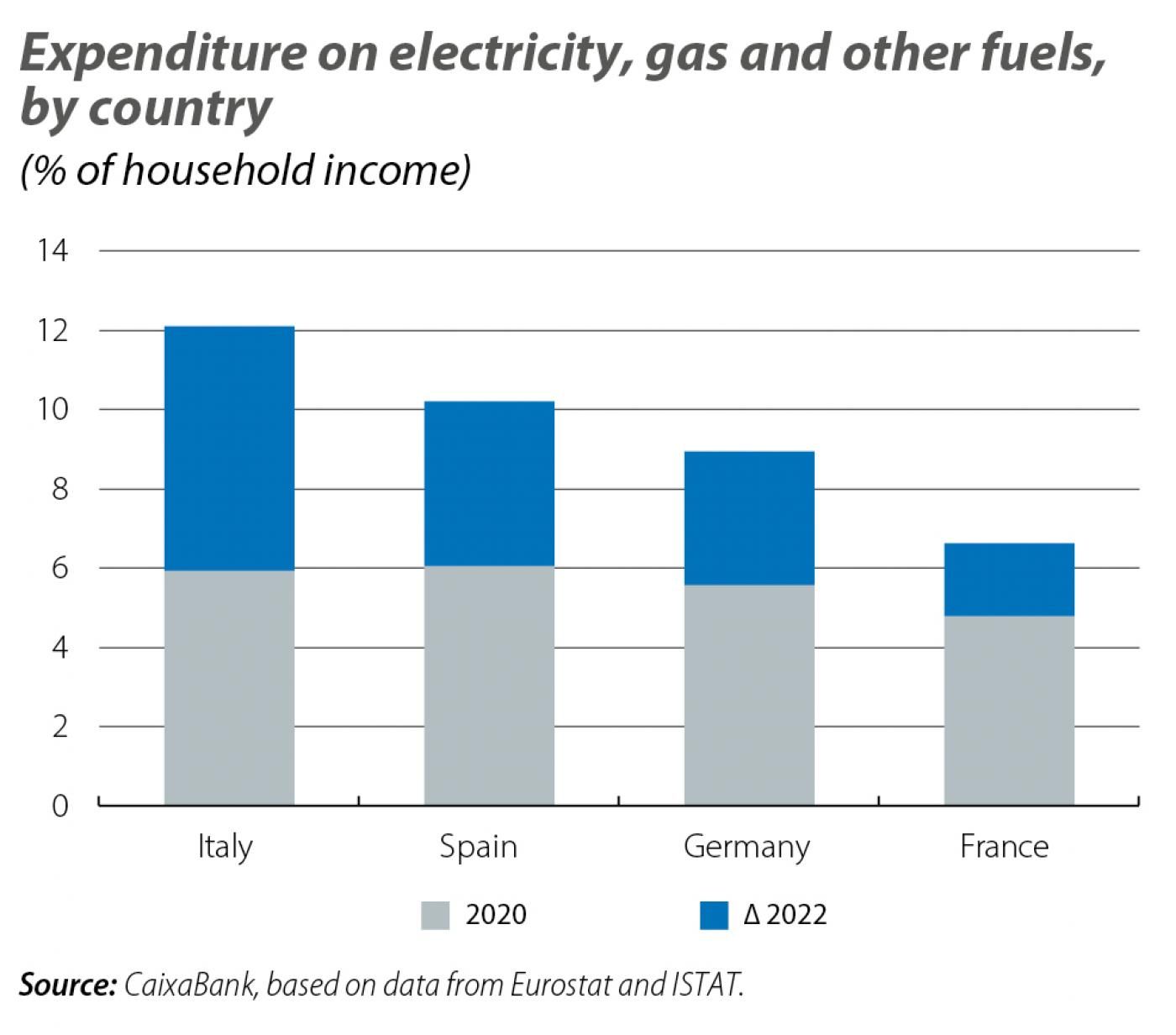 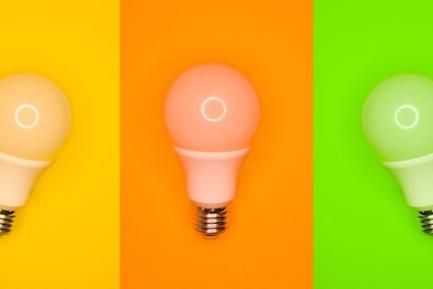