The second-round effects of the inflationary shock

We take a deep dive into the components of the consumer price index to determine whether the high inflation rates recorded in energy and food prices are spreading to the other components. 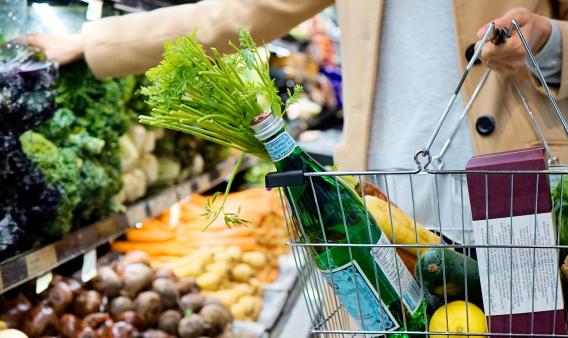 Inflation began 2021 at 0.5% and ended the year at 6.5%. This sharp rise, which has brought inflation to its highest level since 1992, has raised doubts about whether we are experiencing a transitory rebound (and will return to less concerning levels in 2022) or if we will experience more persistent inflationary pressures.

On one hand, the main factors driving the current rally (energy prices, base effects and bottlenecks caused by the surge in demand) are mostly transitory in nature, which should favour a gradual moderation of inflation in 2022. On the other hand, high prices in energy and other inputs also push up the prices of other products if sellers pass on part of their cost increase to buyers.

If these «second-round effects» are sufficiently severe and persistent (the longer the current inflation levels are maintained, the more likely that this will be the case), then the inflation shock could become much more persistent and even outlast the hypothetical moderation of energy prices and other inputs. A rise in prices across the board is also more likely to impact wages, which is another type of second-round effect that would contribute to prolonging the pressure on prices. 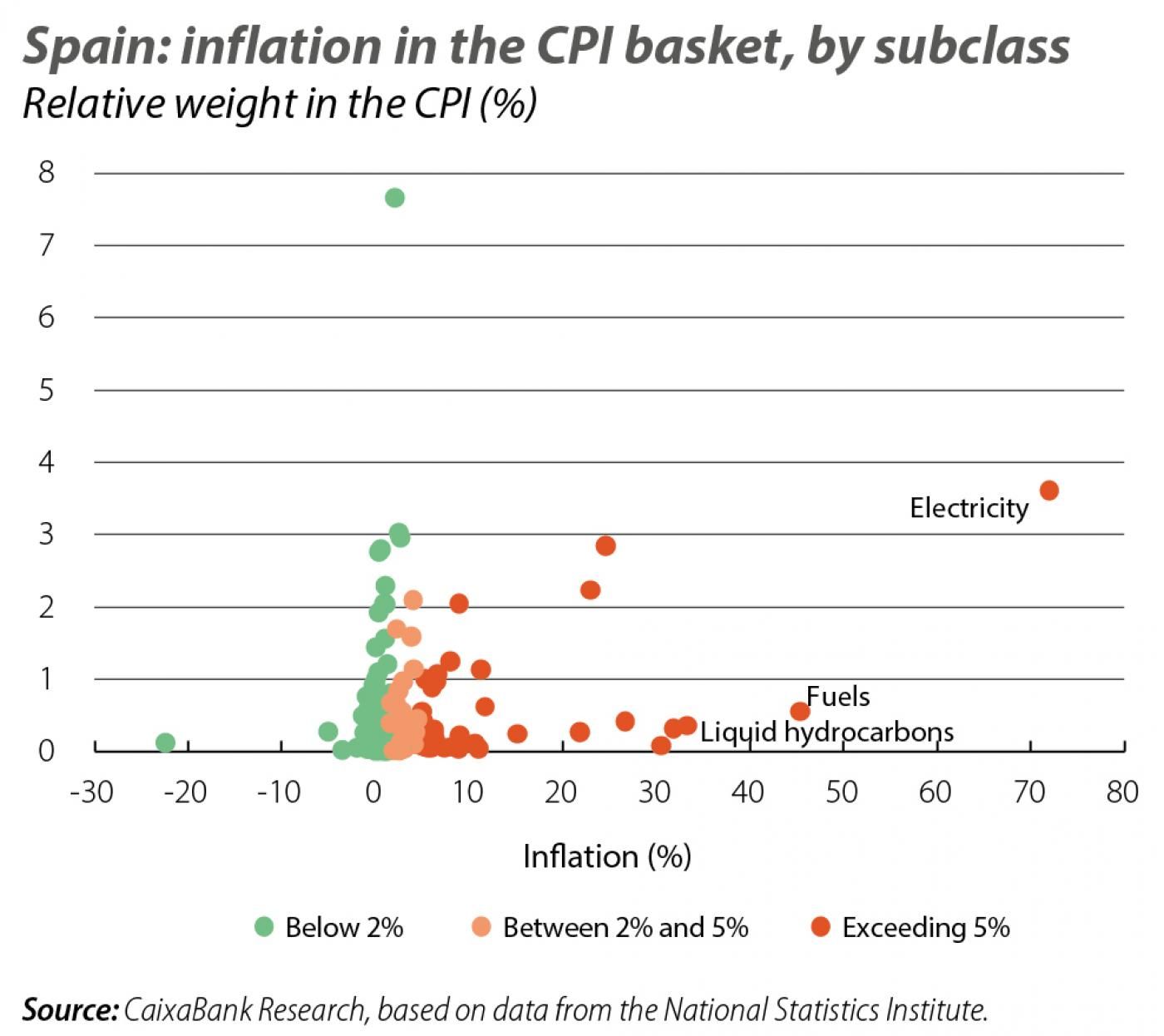 In this regard, it is key to understand whether the high inflation rates are spreading to the rest of the components of the Consumer Price Index (CPI) or whether, on the contrary, they are concentrated in just a few components essentially within the energy segment. To this end, we performed a detailed analysis of the 221 subclasses that constitute the CPI goods basket and how their distribution1 has evolved since 2018.

That said, if we look at the trend shown by the data, the message changes: the situation has deteriorated considerably since September. Comparing the distribution of inflation between September and December (see second chart), we can see that it has shifted clearly to the right. This indicates that a large portion of the subclasses that comprise the CPI have registered significant increases in their respective inflation rates. 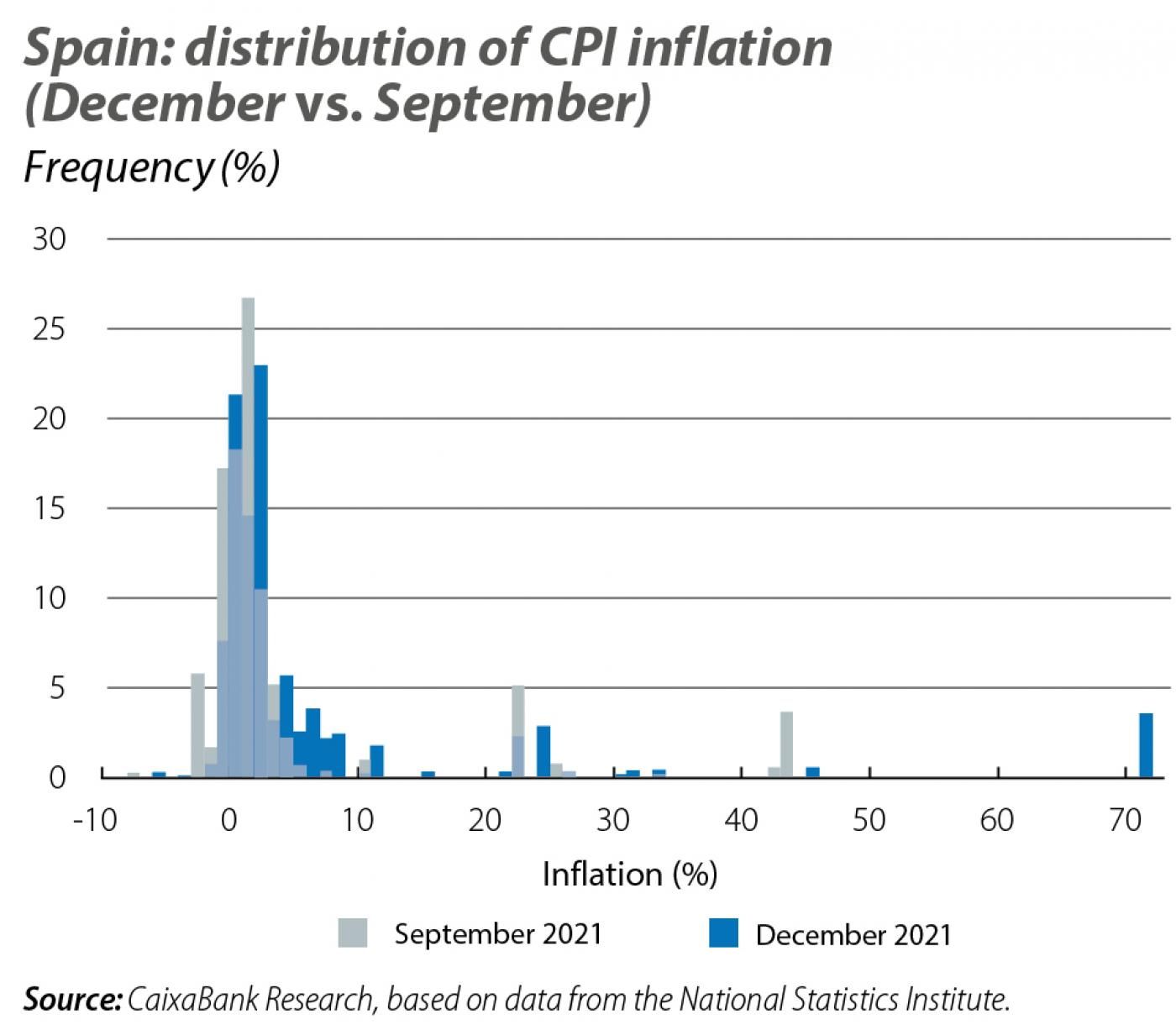 The evolution of the 25th percentile, the median and the 75th percentile of the CPI inflation distribution over time offers us another perspective (see third chart). Up to September, the median remained at similar levels to 2018. This is because the surge in inflation was caused by energy-related items (mainly electricity), which have a low weight in the CPI basket but very high inflation rates (thus affecting the mean but not the median). 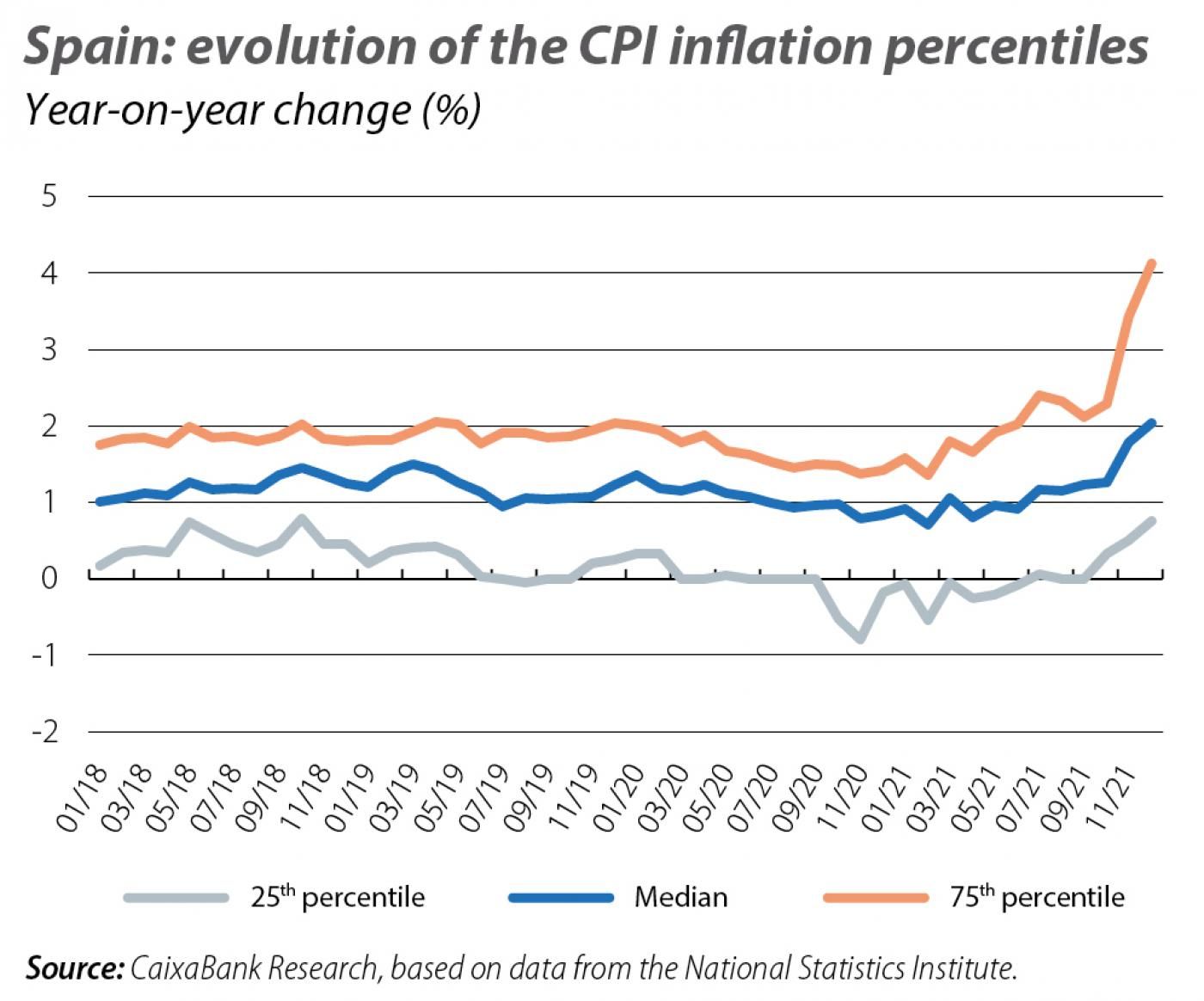 In contrast, since September both the median (2.0% vs. 1.2% in September) and the 25th and 75th percentiles have picked up. The most striking surge is in the 75th percentile: 25% of the CPI basket registered an inflation rate above 4.1% in December (compared to 2.1% in September). Will we see more pronounced second-round effects which will, in turn, generate persistent inflationary tensions? Not necessarily, but it will be key for the pressures on energy prices and other transitory effects to subside over the coming months, as the high inflation rates have already began to spread. 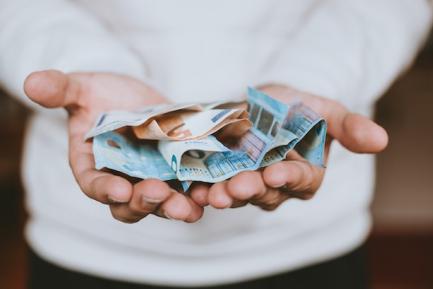