The future of the middle classes: technology and demographics will bring change, but they will not disappear

In recent years, numerous articles have appeared discussing the possible end of the middle class in advanced countries. Is there any truth to this? Estimates made to date (see first chart) foresee that the relative weight of the middle classes will continue to gradually decline in advanced economies. In this article, we focus on two key aspects that emerge when seeking to analyse the future evolution of the middle class: technological change and demographic trends.

To assess the expected impact in the short and long term, we calculate the probability that the occupations currently performed by the middle classes in Spain will be automated in the future,1 using the methodology developed by Frey and Osborne.2 The results obtained are as follows:

• The risk of automation of jobs that are generally performed by the middle class is significant (48%), although it is much lower than that of the working classes (69%).

•These results are consistent with a recent study3 which documents that in virtually all OECD countries the risk of automation decreases as the salary increases.

In the long term, the impact of the technological revolution is even more uncertain and largely depends on the type of jobs that will emerge, which is difficult to predict today.

• There are reasons to be optimistic: the new occupations will require skills that are already within the reach of the middle class. According to the economists David Autor4 from MIT and Lawrence Katz from Harvard University, the new occupations will require creative and social skills, as well as agility and problem-solving abilities. Much of the middle classes already work in occupations in which these skills are important, so their situation could improve if these skills become even more relevant. Autor states that this could benefit many workers with intermediate skills who already belong to the middle class, or who are currently working class but, with these changes, could make the leap to the middle class more easily.

• An example of a group that could potentially benefit from technological change is healthcare and nursing workers, who could take on a more key role in the future as diagnostic tasks and surgery are increasingly performed by machines.

• Education that emphasises these new skills will be key in order to enable people to take advantage of these new opportunities, allowing a new middle class to flourish in line with the new economy.

For young people in developed countries, it is increasingly difficult to form part of the middle class.

• There are fewer middle-class millennials: according to a recent OECD study,5 the percentage of people aged between 20 and 30 who belong to the middle class currently stands at 60%, compared to 68% of baby boomers6 when they were the same age.

• The middle class increases in the baby-boom generation: the percentage of baby boomers who belonged to the middle class when they were between 50 and 60 years of age is larger than the previous generation or the next.

The middle class has aged at a faster rate than the population as a whole over the past 30 years.

• The countries where this trend has been most pronounced are France and the Nordic countries. That said, in Spain these trends have also been significant, with a reduction of 10.4 pps in the percentage of young people who form part of the middle class between 1985 and 2015 and a 5.5-pp increase among people over the age of 65.

The middle class of the future will no doubt be older than the current one.

• The number of middle-class people whose main source of income is a pension will increase significantly. Of course, in order for a significant portion of elderly people to continue to belong to the middle class, it is imperative that the purchasing power that their pension provides them remains relatively stable. However, this is likely to stretch the public finances of many developed countries or to generate certain inter-generational tensions. In the end, the ageing of the population is expected to result in a reduction in the proportion of the working population, unless reforms are introduced. To avoid such tensions, and to balance the interests of all generations, the institutional structure that determines the degree of inter-generational solidarity will need to be redesigned.

2. See C. Frey and M. Osborne (2013). «The Future of Employment: How Susceptible Are Jobs to Computerisation?». Academic Journal, Oxford University. 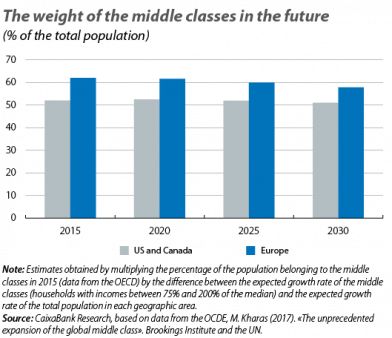 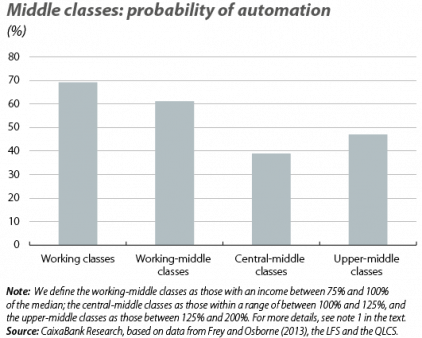 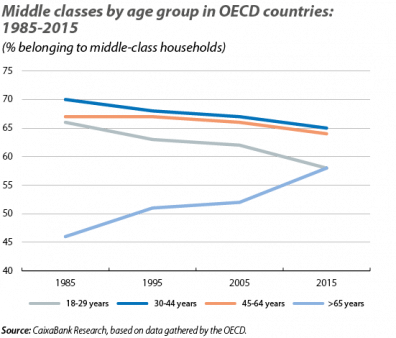