The effects of the illiberal shift: little evidence, much concern

In 1972, at the historical dinner at which Richard Nixon and Zhou Enlai endorsed the restoration of diplomatic relations between the US and China, someone asked the Chinese premier about his opinion regarding the French Revolution of 1789. After a long pause, he replied, «it is too early to say». While it is likely that the reliability of this anecdote is dubious, like many that surround famous quotes, we do believe that it is applicable to another quieter and less media-covered revolution that does not involve barricades or shots fired from the Bastille, which we have called here the illiberal shift. As we shall set out below, it is perhaps still too early to assess its effects, but unlike Zhou Enlai, we do believe that there are sufficient elements to warn of the risks it entails. Without further ado, let us address these issues one by one.

Effects of the illiberal shift: limited evidence for the time being

When we analyse whether the change in the extent of aggregate illiberalism, as set out in the article «The illiberal shift in economic policy: let the data speak!» of this Dossier, has an impact on key macroeconomic variables, the results are inconclusive. If the increase in the illiberal shift corresponded with a deterioration in potential growth, we would be in a position to state that the shift affects economies’ baseline. However, there is no statistically significant relationship between the two variables. A second hypothesis could be that illiberalism eroded inflation expectations. Here, once again, the data do not support this premise. Finally, could it be that, despite not hindering growth or price stability, it could have an impact on the perception of country risk? Again, the change in the level of country risk in the countries studied does not appear to be caused by the shift towards illiberalism. In other words, investors are not clearly inclined to consider countries that have embraced the illiberal agenda as being inherently riskier.

If we abandon our measure of aggregate illiberalism as an explanatory variable and we use the various measures
that approximate the illiberal shift in the seven spheres mentioned above (as a reminder: illiberal competition policy, macroeconomic illiberalism, restrictions to international trade, restrictions to foreign direct investment [FDI], restrictions to immigration, anti-multilateralism and illiberal industrial policy), the results barely improve. Thus, neither the expectations of long-term growth nor inflation seem to have changed due to variations in the level of illiberalism in any of these spheres, and only the increase in the level of country risk seems to be related to variations in some of these spheres. Specifically, in countries where parties have proposed introducing measures that restrict FDI in one way or another, there has been a movement in the country risk indicators that seems to point towards a more negative assessment among investors. However, given that the causality in this field is complex, and the number of observations low (it is an aspect on which many parties and countries do not express an opinion in their political programmes), this result should be taken with a pinch of salt.

In short, the empirical evidence is inconclusive as to the effects of the illiberal shift. However, a dismissive attitude towards the possible negative effects of this shift could be misguided. To make further progress in this regard, it is important to understand why the data may be hiding risks for future prosperity.

Why do the data not show any significant effects of the illiberal shift?

First of all, our inability to identify an economic effect may be due to there being two types of discontinuities operating between cause (illiberal shift) and effect (impact on the economy). The first would be due to the fact that the process of policy implementation is complex. A change in preferences (which is what we are able to measure with our methodology, which, remember, is based on the reading of electoral programmes) may not lead directly to a shift in economic policy in the same direction and with the same intensity. It could be, for instance, that parties propose an illiberal agenda in order to win elections but then, once in government, they end up carrying out a more orthodox economic policy (for example, due to pressures from international investors or the existence of an institutional system that acts as a counterweight to illiberal tendencies).

All in all, it is true that, generally speaking, changes in preferences tend to be reflected in new economic policies or variations of existing ones. Even if this is the case, a second discontinuity between cause and effect might be at play: given that many of the measures in which this departure from the liberal consensus materialises are of a structural nature, in many cases it is likely, quite simply, that insufficient time has passed for the new policies to have a significant effect.

Little room for complacency in the face of the illiberal shift: a coded reading of risks

How should we interpret the above results (or, strictly speaking, the lack thereof)? Any hint of complacency must be immediately discarded. Although the empirical evidence has not found clearly negative macroeconomic effects, as stated previously, it may be only a matter of time before they begin to emerge. Furthermore, we do not know the counterfactual situation: the fact that a country implements a clearly illiberal agenda with no noticeable change in its potential growth tells us nothing about what might have happened if its economic policy had remained liberal (it could, for instance, have grown more).

However, we must place another possibility on the table, and this is a conclusion that as economists we may find unsettling: it may be that the effects of an illiberal agenda might not be as negative as one might expect. Here we enter into intellectual quicksand and we must proceed with caution. For starters, we must remember that there is some consensus on the fact that the first-order economic principles, which we set out in the article «Illiberal forms of economic policy: evolution or radical change from the existing consensus?» of this Dossier, can be tailored to different circumstances. As such, they could take different forms for countries at different stages of development.

The most representative case in this field is the study of emerging countries. Many countries, particularly those in Asia, have opted to keep certain strategic sectors protected until they have been deemed ready to withstand international competition.

However, tailoring the principles is very different to revoking them altogether. This is illustrated by the case of the heterodox economic policies that were followed in different Latin American countries in the 1970s and 1980s, or in Venezuela in this century. These policies led to major macroeconomic imbalances that ended up destabilising these economies and generating a significant deterioration in economic well-being.

All in all, besides startling errors like those set out above, and assuming that we are talking about countries with a comparable level of development, could it be that illiberalism sometimes works, from an economic perspective? The literature on the economic effects of populism, which has parallels with the kind of intellectual reflection we propose to the reader here and which is still at an early stage of academic development, suggests that a key element is determining what type of restrictions are removed by unorthodox policies.1 A part of the liberal economic policy agenda focuses on restrictions, whether technocratic (an independent central bank, fiscal rules, etc.), or external (for instance, opening up to international capital involves fiscal discipline). If the restrictions removed are ones that certain power groups had previously established for their benefit (for instance, not all forms of integration into globalisation are neutral, as there is evidence that they sometimes reflect the preferences of certain economic sectors rather than those of the population as a whole), then there could be an efficiency gain. Therefore, the paradox is that an illiberal measure could enable the recovery of a situation that the liberal consensus was originally seeking to achieve and which, to some extent, had been perverted.

However, even if this is the case, the bottom line is that this temptation to break free of restrictions is often fraught with danger. It could end up wearing away at the limits on which reaching consensus has taken so much effort and of which the benefits are backed by ample evidence. As a very clear example: it took nearly two decades for the majority of emerging countries to have independent central banks, yet this independence is being sacrificed at an alarming rate in countries that, until recently, were considered exemplary. Are we playing with fire?

Moreover, and what follows suggests an even more serious risk, it should be borne in mind that the rupture of the liberal consensus has implications that go beyond the strictly economic sphere. In a society in which the seed of illiberalism germinates, it is difficult to imagine that the illiberal temptation will be constrained to the sphere of economic policy, and this poses the risk of an anti-democratic trend. History reminds us that whenever there has been a shift that has significantly eroded pluralist, democratic and liberal norms, the path followed has ended badly. Let us hope that this Dossier, with its attempt at characterising and measuring the phenomenon, provides a small contribution to a fundamental debate which we cannot afford to get wrong. 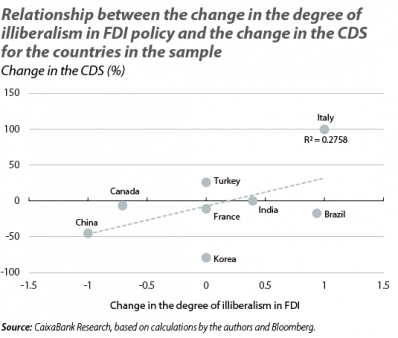