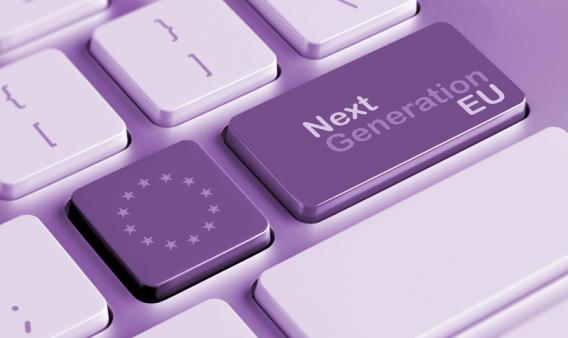 Before evaluating the digital projects of the National Recovery and Resilience Plans (NRRPs), it is worth identifying where the various countries currently stand in the digital sphere. To this end, we use the synthetic DESI (Digital Economy and Society Index) published by the European Commission, which consists of five pillars: connectivity, human capital, the use of internet services, the integration of digital technology in businesses, and digital public services.

None of the countries we analyse (Germany, France, Italy, Spain and Portugal) lie at the top of the EU’s digital ranking according to the DESI (average level of the five pillars), which is led by the Nordic countries, with Finland at the helm (see first chart). This may come as a surprise, given that Germany and France are the economic engine of continental Europe. 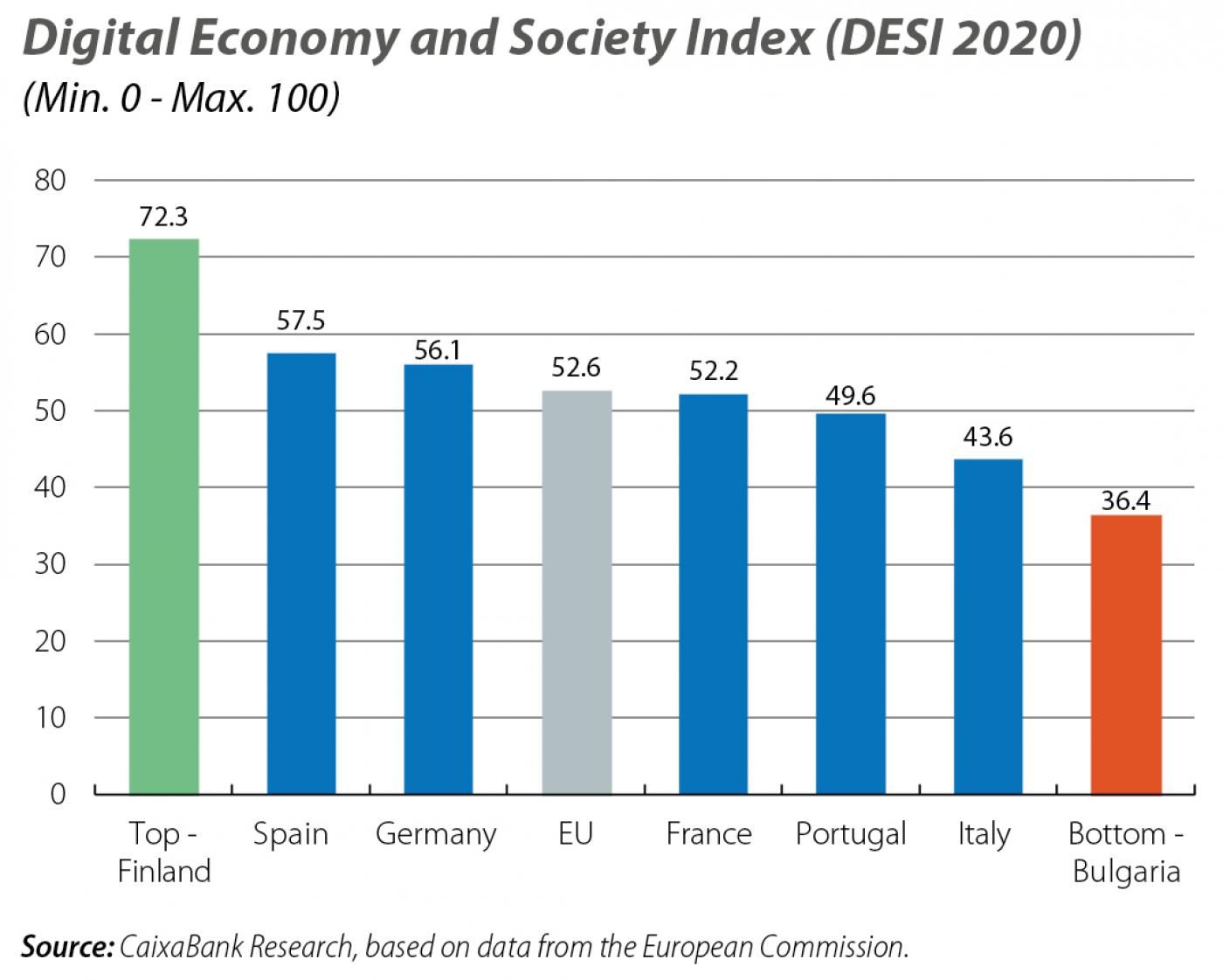 Of the countries we analyse, Spain and Germany are the countries with the highest DESI score, slightly above the EU average and in the mid-range of all the 28 EU countries. The two countries have a similar level of digital development in 3 out of the 5 components of the DESI, while they differ in the pillars of digital public services, where Spain clearly stands out, and human capital, where Germany leads the way. In fact, Germany’s lead when it comes to digital educational is a clear asset to its advantage, since it is a component that often takes time to develop (see second chart). 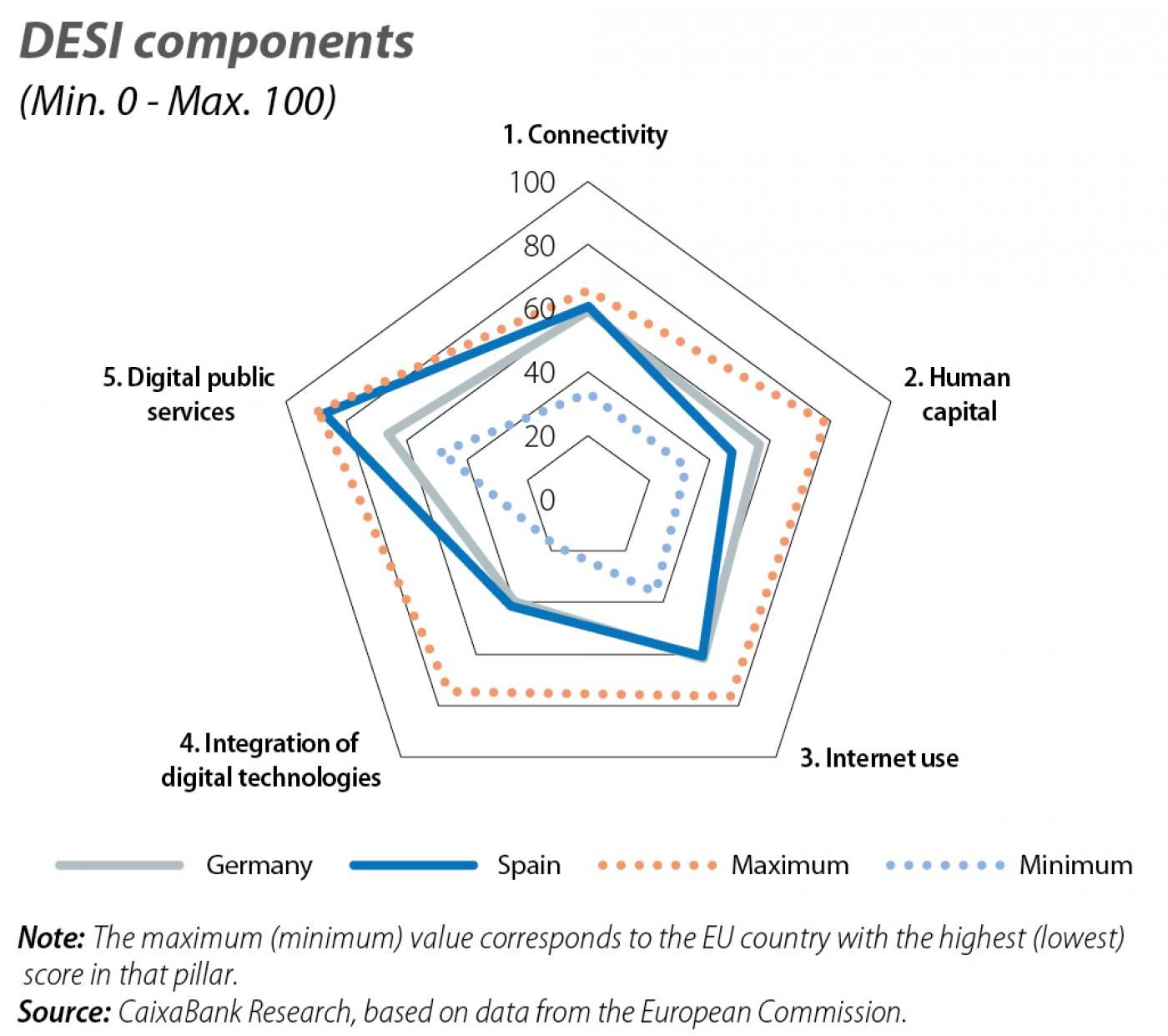 In contrast, Italy is well below the EU average and lies near the bottom of the European ranking. Lagging clearly behind in all the pillars of the DESI, it scores particularly poorly in human capital, where it is at the tail end of the 28 countries studied. France and Portugal, meanwhile, are also lagging behind, albeit less so than Italy.

The strengths and weaknesses of the national plans

The analysis above shows that all countries need significant digital investments in most of the areas defined in the 2030 digital objectives set out by the European Commission: infrastructure, knowledge or skills, businesses and the public sector. Logically, these areas have an obvious translation into the components of the DESI. In particular, infrastructure is closely linked to the DESI’s connectivity pillar; knowledge or skills, to that of human capital or training; businesses, to the integration of digital technology; and the public sector, to the DESI pillar of digital public services.

Starting with the country lagging the furthest behind, according to its NRRP Italy will invest substantially in all digital spheres. In particular, each of the four areas will receive between 18% and 34% of the nearly 50 billion euros allocated to digitalisation (a priority to which it dedicates 25% of the total NGEU funds).1 This is a necessary strategy to make substantial improvement in the digital arena. However, the planned expenditure on training (slightly below 20%) may be somewhat low, since the country sits in last place in this field according to the DESI (see the third chart for a comparison for each country between the gap in the DESI versus the top country and the planned level of investment). 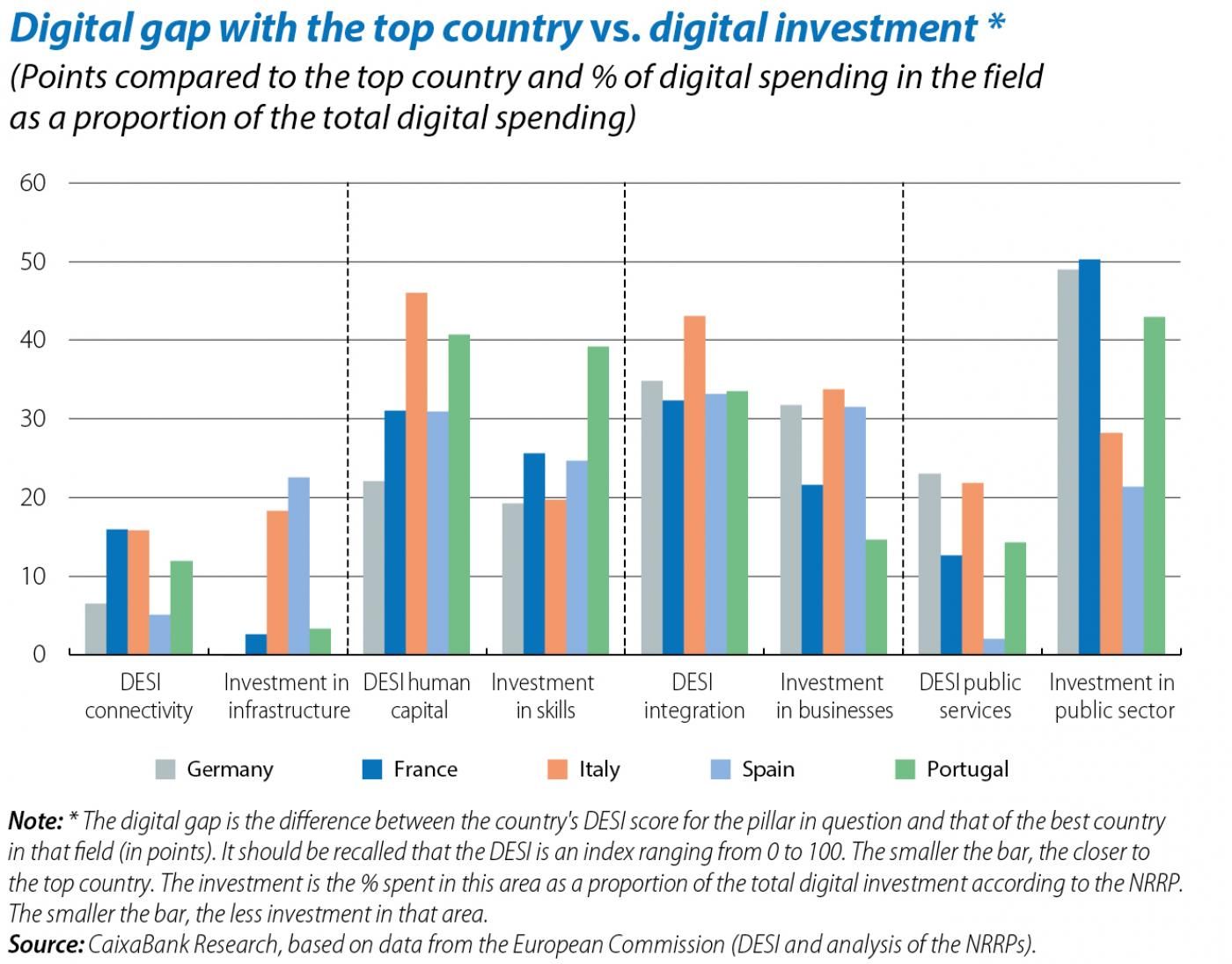 In the same vein, Spain will also invest between 21% and 32% in each digital area (this priority absorbs 28% of the total NGEU funds).2 As in the case of Italy, the expenditure allocated to training or human capital also appears somewhat insufficient. In contrast, the percentage allocated to the public sector is relatively high. Nonetheless, the Spanish and Italian NRRPs foresee a major investment in improving the use of digital technologies by businesses (this is where they allocate a greater percentage of the expenditure in both cases). This perimeter encompasses improvements in tech knowledge for employees and, consequently, in their digital skills. In reality, the areas of digital investment are not isolated, but highly connected. Classifying the expenditure of the various projects set out in the NRRPs is useful for making an initial assessment, but it is important to acknowledge that this approach can be somewhat arbitrary, so it is essential to delve deeper into the details.

Portugal, meanwhile, does plan to invest substantially and directly in improving its population’s digital skills, with around 40% of the total digital spending being allocated to this area (digitalisation as a whole absorbs 22% of the NGEU funds). In fact, of the five components of Portugal’s DESI, human capital is the one which scores the worst in the European ranking, so this is a good strategy for improving digitalisation in the country. Based on this initial review, it appears that Portugal could increase the level of investment in boosting digitalisation among its businesses, potentially at the expense of investment in public sector digitalisation, given that this latter area is in a more comfortable starting position in both comparative and absolute terms.

Finally, we have Germany and France, which have chosen very different approaches. Somewhat surprisingly, Germany has decided to devote a very high percentage of the NGEU funds to digitalisation (52%, more than double the level demanded by Brussels), compared with a meagre 21% in the case of France despite being at a clear disadvantage. Also, according to our analysis, Germany seems to target digital investments in the areas that need it most: the digitalisation of businesses and the public sector. In this latter pillar, although Germany may not seem to be far behind the leading country (in points), it is clearly lagging behind the rest of the countries included in our analysis. France’s allocation of the funds, meanwhile, is more debatable, especially on the connectivity front, where it hardly plans to invest at all, as well as in the public sector, where it seems somewhat excessive.

In short, both Italy and also Spain and Portugal broadly propose digital investment projects that are appropriate to their needs: greater use of digital tools among businesses and better training for the population. Germany is also targeting investments in its weakest areas (public sector and businesses). France’s priorities, however, do not seem so aligned with the shortcomings reflected in the Commission’s indicators.