Political instability in Europe: France in the eye of the storm

The protests of the yellow vests in France erupted in November in response to a fuel tax rise aimed at cutting carbon dioxide emissions. We estimate that, on average, these taxes were going to reduce the disposable income of drivers of diesel vehicles by 17 euros per month in 2019 and by 9 euros per month for drivers of gasoline vehicles (with a greater impact in rural areas, where cars are used more frequently). In addition, if the taxes had continued to increase up until 2022 as planned, which is now uncertain, the cumulative reduction in monthly disposable income compared to 2018 would have been 68 and 36 euros per month, respectively.

These protests rapidly escalated into a national phenomenon. As we can see in the first chart, which uses the GDELT database with daily information on protests in France based on the news from various media, the protests reached their peak in December. In fact, this month marked the highest level of social mobilisation in the last 10 years (greater than the mobilisations that followed the attacks on Charlie Hebdo in January 2015 or the protests against Sarkozy’s pension reform in the autumn of 2010), although in January and February there was a notable easing of tensions.

Focusing on the economic consequences of these mobilisations, our estimates suggest that temporary spikes in political uncertainty have a relatively contained and short-lived impact on economic activity in the euro area:1 as the second chart shows, spikes in political uncertainty on a scale of that seen at the end of 2018 typically have a modest and transient impact on the GDP of the euro area.

Therefore, the short-term economic impact of uncertainty appears to be relatively modest, although, as argued by other analysts,2 the protests of the yellow vests could have weighed down on economic activity through mechanisms other than uncertainty, such as through the direct damage the protests had on economic activity in Q4. Can we draw a line under the issue? No, because the effects in the medium term could be more significant still, as we shall see.

Political noise and the reformist agenda in France: dented but not lost

One of the key themes for the next few years is the extent to which these types of protests can constrain the reformist agendas that could be implemented in advanced economies. On this note, following the major protests of the yellow vests and the subsequent reaction of its rulers, France serves as a particularly interesting case study, especially if we take into consideration that 60% of public opinion is sympathetic to this movement.

The yellow vests are a heterogeneous movement with a wide range of ideologies. What unites them is that, largely, they are middle-working class workers from rural and suburban areas that are particularly affected by the rise in fuel taxes (as they rely on their vehicles to get around). It is precisely their heterogeneous nature that makes it unlikely that the mobilisation on the streets will lead to a new political candidacy. Nevertheless, the yellow vests could be echoed in other European countries, given that they also have a sector of the population with similar characteristics. Logically, the conclusions we draw can give us clues about the future of reforms expected to be put forward in other European countries with dissatisfied segments of the population.

In France, the Macron Administration has taken note of the protests and has simultaneously acted on three fronts. Firstly, it has given social concessions to defuse the protests (a rise in the minimum wage of 6.7%, reversing the fuel tax rise, ceasing taxation on overtime and reducing taxes on pensioners who receive less than 2,000 euros per month). Secondly, it has launched a major participatory discussion in Q1 2019 to seek the citizens’ views on four very broad topics (taxation and public spending, organisation of the state and public services, ecological transition, and democracy and citizenship). Thirdly, it has given firm messages announcing that major reforms yet to be implemented are going to be addressed in the second half of the mandate (coute que coute). According to President Macron himself, these actions represent a «change of method» and not a «change of course». But what reforms are still pending? Are they really going to be addressed? Let’s break it down. The major reforms that remain pending for this second half of the mandate are the second phase of the labour reform, the reform of public administrations, pension reform and various tax matters.

Beginning with the labour reform, the current minister for Employment, Muriel Pénicaud, has affirmed that it is still going ahead. This comes as no surprise given that the demands of the yellow vests have not included criticisms of Macron’s labour reforms. This is a reform being discussed among social players that is aimed at invigorating France’s labour market. It envisages linking unemployment benefits to the search for work, an extension to the benefit for certain groups such as self-employed workers and entrepreneurs, and deterrent measures to discourage the use of temporary contracts (the most controversial point, as the introduction of penalties for firms in certain circumstances is being considered). All this is accompanied by a reform of vocational training and of courses aimed at helping young people in long-term unemployment to rejoin the labour market.

With regard to the reform of the public administrations, the Government has postponed its cabinet discussion until the second quarter of the year, once the great national debate currently taking place has come to an end. In other words, depending on the conclusions reached on the role of public administrations and how they should provide their services, the content of the reform will be adjusted. We should remember that this is an ambitious reform, initially aimed at cutting the number of central government civil servants by 50,000 by 2022 and introducing new performance-related forms of remuneration. Currently, there are doubts over whether this reform will end up being implemented as originally conceived, in order to avoid renewed large-scale protests that would further erode the Government’s support.

As for the pension reform, it is centred around a points-based system, whereby points will be accumulated in a single account and will translate into a monthly pension, taking into account criteria such as the number of years of social security contributions and the average life expectancy in France at any given time. This is a reform that has been postponed on several occasions and the most likely scenario is that, at the current juncture, it will not be approved until the closing stages of the mandate (in addition, it would not come into force until 2025 and would not change the retirement age).

Finally, with regard to the outstanding tax matters, we are likely to see a certain relaxation of the objectives for the remainder of the mandate. In fact, the concessions of the French Government will make it very difficult for the fiscal consolidation objectives announced at the beginning of the mandate to be met. According to the research institute iFRAP, the Government’s current budget plans, which involve cutting public spending from 56% of GDP at the start of the mandate to 52% in 2022, are based on an overly-optimistic forecast for real GDP growth (1.7% per year between 2019 and 2022, higher than ours and that of most analysts). Correcting this forecast, a further cut in spending of at least 30 billion euros would be needed.3 Such a cut would be difficult to achieve based on the moderation of economic policy announced following the yellow vest protests.

What is the balance of the reforms at the current juncture? According to the iFRAP, at present, Macron is clearly fulfilling 33% of his election promises, 40% to a certain extent, and failing to fulfil 27% of them.

In short, Macron’s reformist agenda is showing resilience, especially in relation to the labour market. This is a particularly pressing issue in a country where the rigidities of the labour market have led to an unemployment rate of 18% among low-skilled workers, and where between 300,000 and 400,000 vacancies are not being covered because of a lack of candidates with the necessary qualifications. All in all, due to the strong social response, it is quite possible that these reforms will move forward at a more moderate pace and that the Government will have to make major social concessions to ensure that the benefits of its policies are more widely spread than they have been to date: estimates suggest that the budget for 2019 implies no increase in the disposable income of 10% of the population on lower incomes, while it increases the disposable income of the wealthiest 1% by 2.4% (much more than the 1.0% average increase for the population between the 10th and 80th percentiles). In addition, the cabinet has put some measures on hold, and some of its key areas of action planned for the second half of the mandate will await the outcome of the open debate on citizenship. What will happen? One thing is clear: the political noise has shown that, in France, it is capable of having a considerable impact on the scope of the reformist agenda that the Government was seeking to implement.

1. We estimate an autoregressive vector using quarterly data from January 2001 of real GDP and of the political uncertainty index for France and for the euro area. 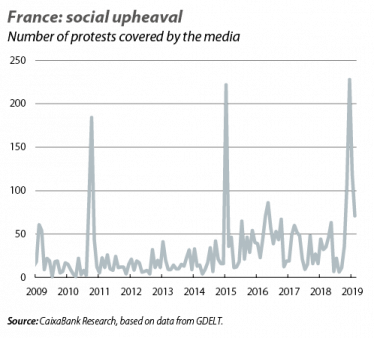 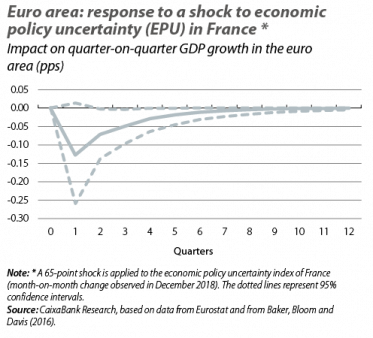 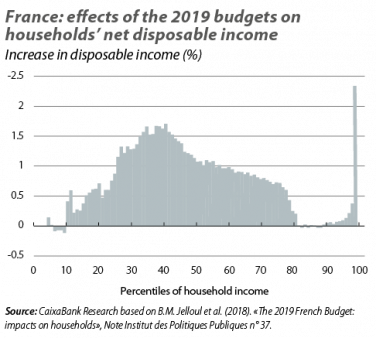