After a strong recovery, the Portuguese economy faces a difficult end to the year 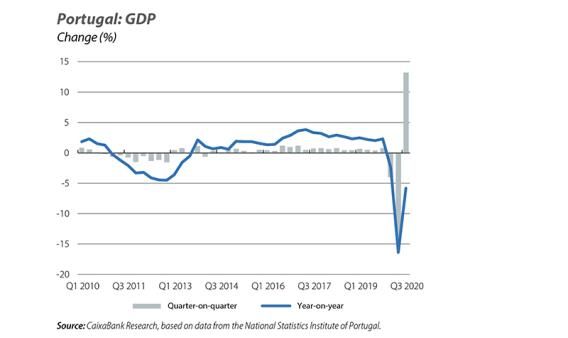 The economy enjoyed a significant revival in Q3 2020, but the second wave of infections dampens the recovery once again

GDP recovered considerably in Q3 2020, with a rebound of 13.2% quarter-on-quarter (–5.8% year-on-year), leaving the economy around 6% below pre-pandemic levels. By component, the recovery in economic activity was largely driven by domestic demand, and by private consumption in particular, although external demand also improved thanks to a stronger recovery in exports of goods than in imports (and in spite of the weakness of tourism and the consequent decline in service exports). While this revival in economic activity was expected, as a natural reflection of the lifting of the lockdown in spring, the strength of the rebound was greater than expected. However, in the fourth quarter of the year, the new outbreak of COVID-19 infections will hurt the recovery. Indeed, the first indicators for October are already showing a cooling of economic activity. For instance, car sales fell to a daily average of 305 units (–29% compared to September) and average daily electricity consumption fell by 1%. In addition, uncertainty over how the pandemic and economic activity will pan out in the closing months of the year remains very high. 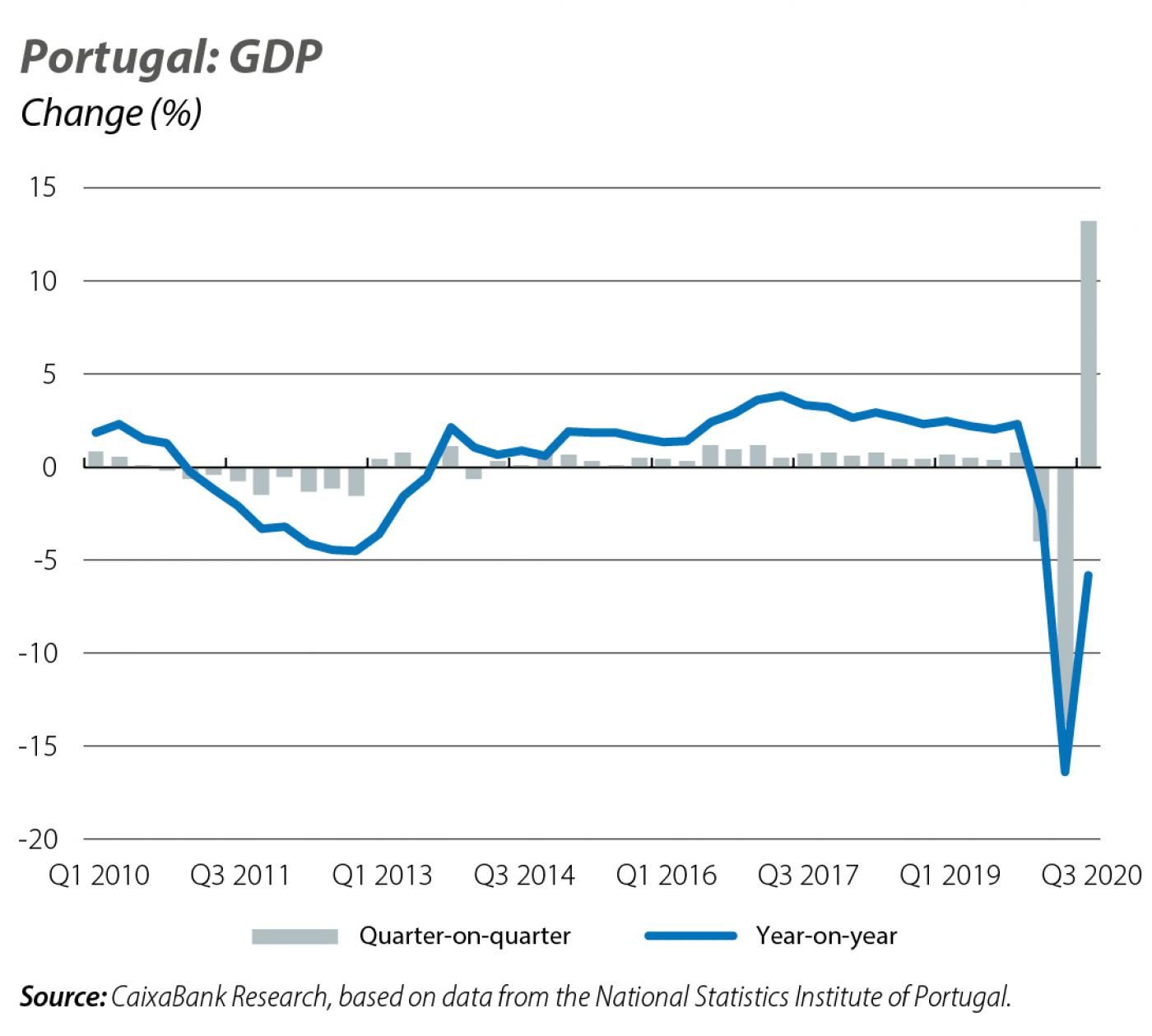 According to preliminary estimates, in September the unemployment rate decreased for the first time since the spring, standing at 7.7% (–0.4 pps compared to August but +1.2 pps above the figure for September 2019). Employment growth also accelerated (+0.8% month-on-month), although employment remains around 2% below pre-pandemic levels. However, other data paint a more mixed picture. On the one hand, the number of unemployed registered in job centres (which follows a different system for accounting for unemployment) increased slightly (0.2% quarter-on-quarter) and continued the upward trend initiated in March, reaching over 410,000 (30% more than in February). On the other hand, the number of workers under temporary furlough schemes (but with no change in their social security category) had increased above 8,600 in September, 7,000 more than in February. Looking ahead, the coming months will largely be determined by how the pandemic develops, and unemployment is likely to rise once again. Furthermore, this trend could be accentuated once the support measures for businesses and the barriers to redundancies implemented in the context of the COVID-19 pandemic are removed. 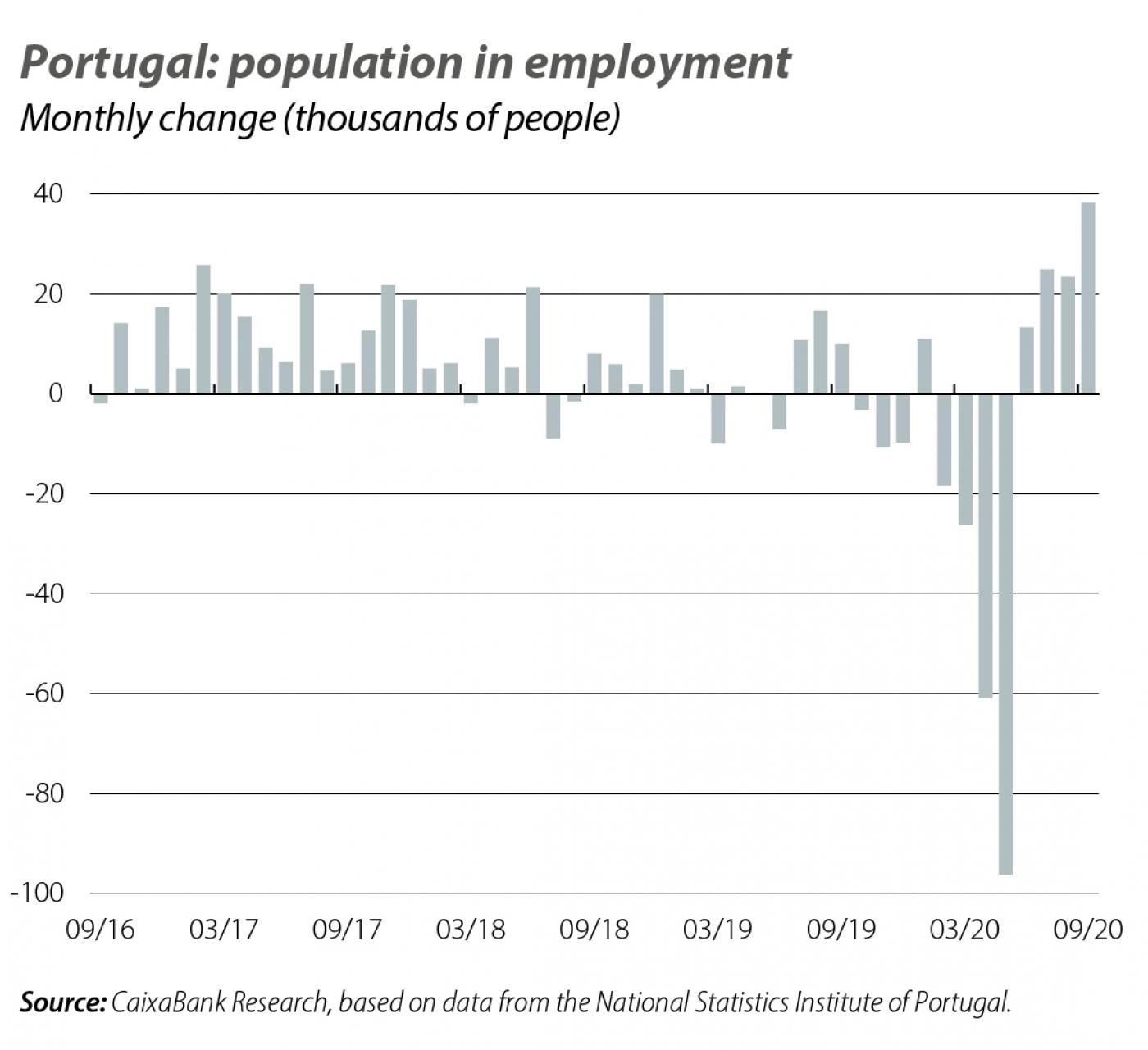 In September, overnight stays at accommodation establishments in Portugal fell by 53.4% year-on-year, according to preliminary data. This decline is especially pronounced in the case of overnight stays of foreigners (–71.9% year-on-year, down to 1.5 million), with more pronounced declines in the case of tourism from the US (–95.5%), Canada (–94.7%) and China (–94.5%). Given the importance of tourism to Portugal’s economy (in 2019, the total consumption of tourists accounted for almost 15% of GDP), the sector’s difficulties will continue to hold back the revival of the Portuguese economy.

The government expects to end 2020 with a budget deficit of 7.3% of GDP, and the draft State Budget for 2021 foresees a deficit of 4.3% next year. In this budget proposal, the government projects a GDP rebound of 5.4% in 2021, which it estimates will contribute to reducing the deficit by 1.9 pps of GDP. On the other hand, the main budgetary measures for 2021 remain heavily influenced by the need to combat the pandemic and support the economy. For instance, they include extraordinary support for workers’ incomes and a reduction in VAT on electricity. According to the government’s proposals, the new extraordinary measures proposed in response to the pandemic that are due to be launched in 2021, combined with those already implemented in 2020 that will remain in force in 2021, will together raise the deficit by 1.8 pps (0.9 and 0.9 pps, respectively). The government also anticipates that the public debt ratio will go from 134.8% of GDP in 2020 (a historic high) to 130.9% in 2021, a reduction that would largely be explained by the growth in economic activity. In the context of the COVID-19 pandemic, it is important to emphasise that the scenario set out by the government is subject to a high degree of uncertainty. This uncertainty is not only related to the execution of the budget up until the end of 2020, but also to the risks associated with the economic recovery in 2021, the evolution of the pandemic and the potential execution of guarantees related to credit lines granted to companies. 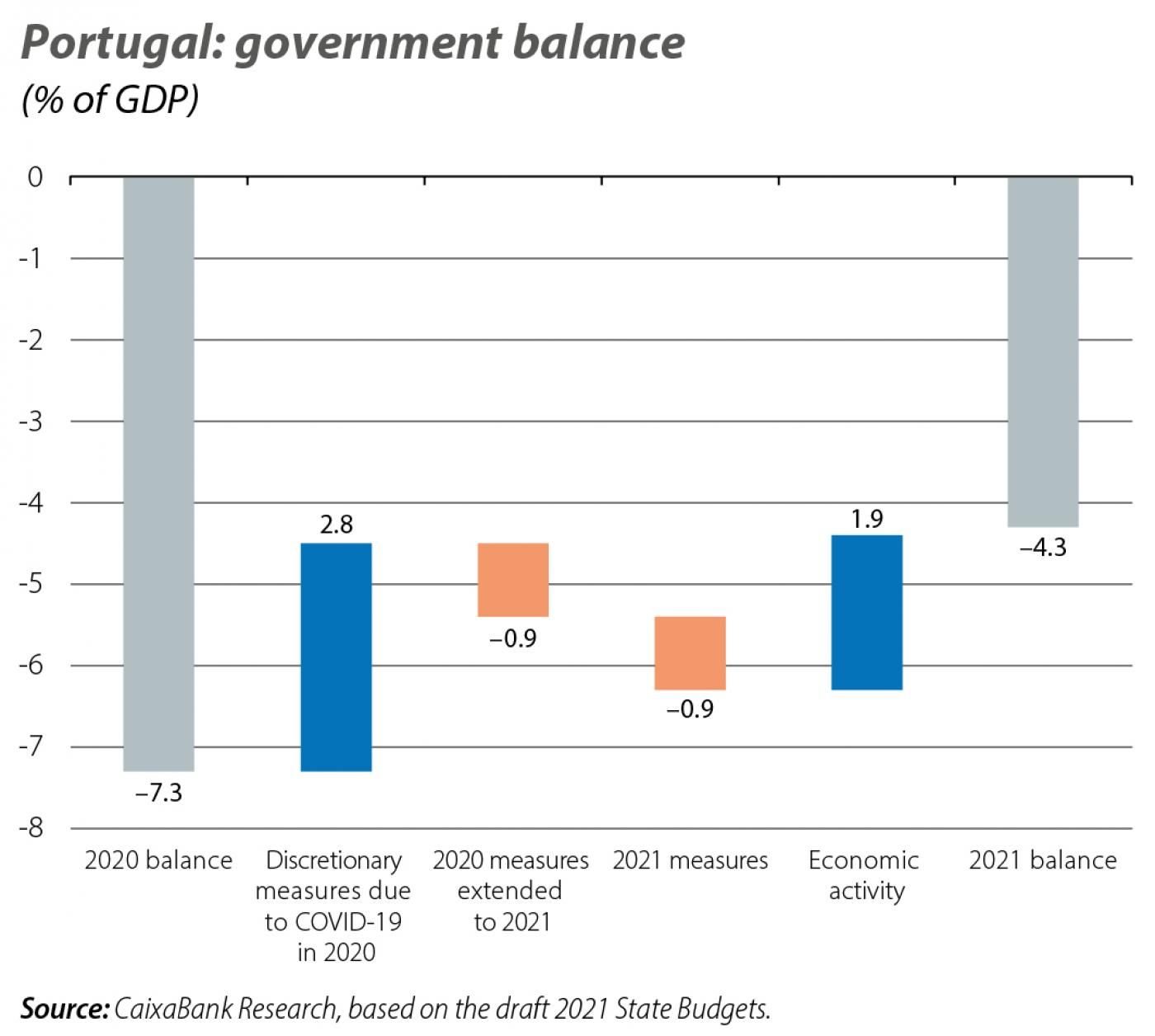 First signs of a reduction in real estate prices

Data from Confidencial Imobiliário indicate a 2.1% month-on-month decline in prices in September, which would be the most significant decline since May 2011 (–2.2%). Compared to the same period last year, price growth would still be positive (+7.9% year-on-year) but much more moderate than in previous months. All this confirms the prospect of a slowdown in price growth (see the Focus «The Portuguese real estate market, wounded by the virus» at www.caixabankresearch.com).

In August, new lending fell in all segments except for lending for housing. In particular, new lending for the non-financial private sector fell by 17.7% year-on-year. Despite this, the balance of loans increased by 1.6% year-on-year due to the effect of credit moratoriums and the deferral of sales of doubtful loans. In fact, credit moratoriums had been granted on nearly 730,000 contracts at the end of August, largely consisting of housing credit contracts and other mortgage loans (around 43% of the total). As for the outlook for Q4, the surveys anticipate lower demand for credit among firms, a greater appetite for consumer credit and stabilisation in the case of housing credit. 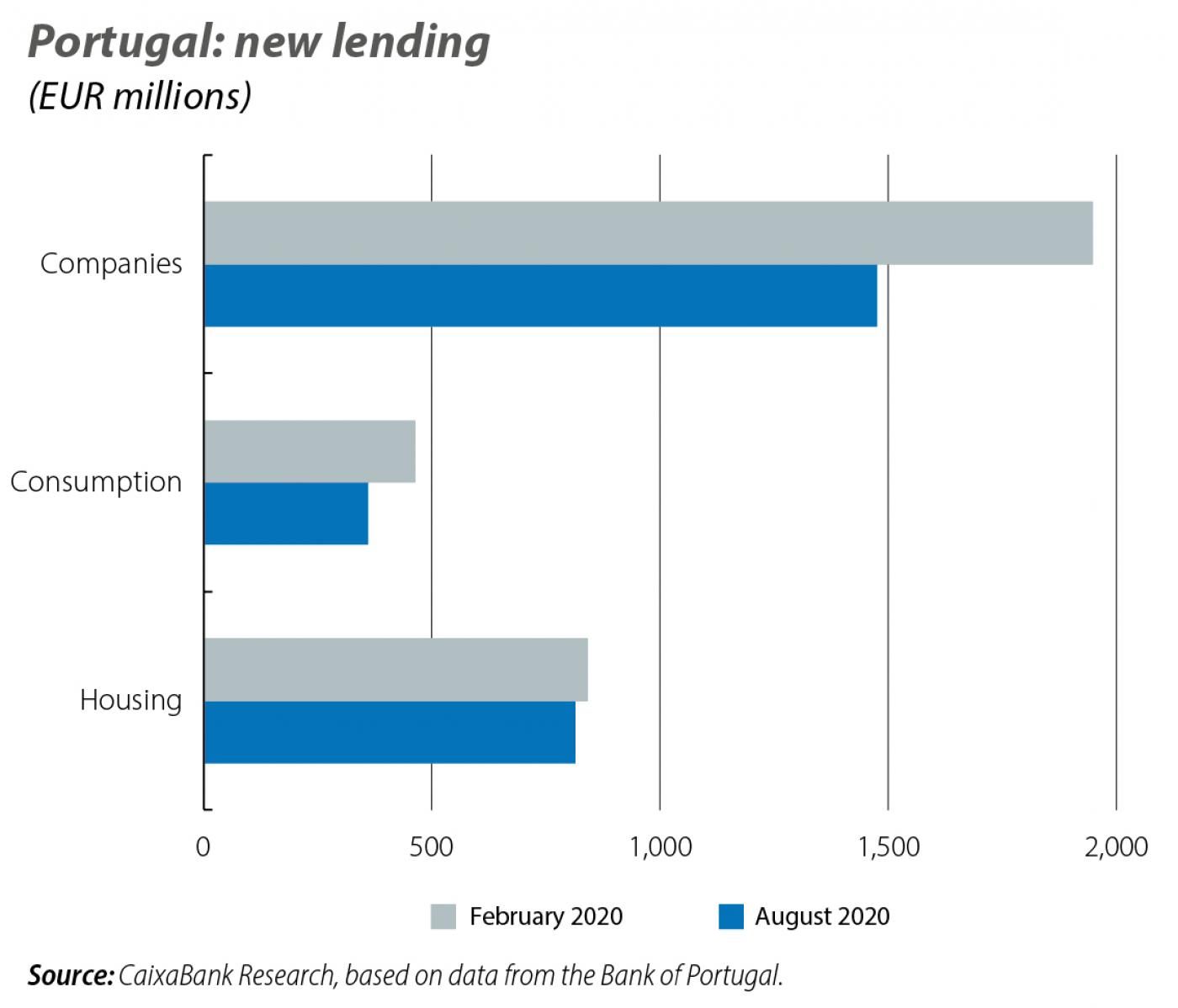