The COVID-19 outbreak will provoke a new and unprecedented fall in GDP in Q2. After plummeting by 5.2% quarter-on-quarter (–4.1% year-on-year) in the first quarter of the year (the biggest quarter-on-quarter decline since the National Statistics Institute’s historical series began in 1995), all the indicators suggest that economic activity will suffer a significantly higher decline in Q2, since more weeks have been affected by the restrictions associated with the state of alarm. However, in May, the initial phases of the lifting of the lockdown brought about a progressive reactivation of economic activity. According to internal CaixaBank data, spending with Spanish cards gradually recovered over the past month. Whilst spending fell by 28% in the third week of the month compared to the same week last year, in the last week of May this figure had improved to –10% (in April, when the lockdown measures were much more stringent, the average decline for the whole of the month was around –50%). Looking ahead to the coming months, the uncertainty surrounding the forecast scenario remains exceptionally high, but all the indicators suggest that the decline in economic activity for 2020 as a whole will end up clearly exceeding 10%.

Economic activity registered a sharp decline in April. This is evident in various indicators, such as retail sales, which fell by 32% year-on-year in April. This is 17.4 points below the figure for March and represents the biggest drop since the beginning of the historical series (January 2000). On the other hand, the National Statistics Institute reported that a high proportion of companies were closed to the public (around 46%), although, in contrast, the sales of companies that operate primarily by mail or online increased by 53% year-on-year. The economic sentiment indicators also reflected a collapse in activity. Specifically, the manufacturing PMI fell to levels not seen since 2008 (30.8 points in April), while the counterpart indicator for the service sector reached an all-time low of 7.1 points. Finally, industrial production fell by 12.2% year-on-year in March, a decline not seen since September 2009.

The lifting of the lockdown partially dampens the impact of COVID-19 on the labour market. While in April the number of people registered with Social Security saw a record decline (–691,054 workers in seasonally adjusted terms, the biggest drop since the start of the series in 2001), between 30 April and 29 May registration increased by 188,000 workers to reach 18.6 million people. With this slight rebound, the reduction of registered workers since 12 March moderated to 760,000 people. As for the unemployment figures, following a rise in April of 282,891 people, in May the number of people unemployed saw a more moderate increase (+27,000 people), bringing the total to 3.86 million. In addition to this figure are those employees affected by temporary staff lay-offs (ERTEs), who continue to be registered with S.S. and are not counted as unemployed, amounting to 3 million people. On this point, the government approved the extension of ERTEs caused by force majeure until 30 June and opened the door to the possibility of additional extensions if the restrictions on economic activity persist.

General government debt reached 1.22 trillion euros in March 2020, which represents an increase of 22.5 billion in the last month (+2.3% year-on-year). This brought the level of public debt as a percentage of GDP to 99.0% in Q1 2020, +3.5 pps compared to the end of 2019. This upward trend will be accentuated in 2020 by the impact of the COVID-19 outbreak on the economy. With regard to the latest measures approved by the government, of particular note is the creation of a minimum income benefit (known as IMV) with the aim of redistributing income to eliminate extreme poverty. This benefit will be linked to incentives for participation in the labour force and social inclusion and it will supplement existing household income up to a guaranteed income threshold, which depends on the composition of the household and ranges from a minimum of 5,533 euros per year for a single-parent household to a maximum of 12,184 euros. The government estimates that some 850,000 households (2.3 million people) could benefit from this measure.

Inflation fell 3 decimal points in May due to the drop in the oil price. In the absence of the breakdown by component, headline inflation stood at –1.0% year-on-year and has accumulated a decline of 1.7 pps since February, the month prior to the lockdown. This decrease is explained by the reduction in fuel prices, which in April had already amassed a 16.2% year-on-year decline due to the average oil price in euros since March being –50% below the average level for 2019. Thus, the decline in electricity prices is offsetting the rise in unprocessed food prices registered since the start of the lockdown. Core inflation, meanwhile, has remained stable in recent months (1.1% in April), although inflation in many services is expected to decline during the course of 2020.

The foreign sector compensates for the losses in tourism with the low oil price. The current account balance stood at 2.1% of GDP in March 2020 (12-month cumulative balance), an improvement of 0.4 pps of GDP compared to the figure for March 2019. In the balance of services, the stagnation of tourism (exports for the month of March fell by 63.3% year-on-year and imports, by 44.2%) caused the sector to subtract –0.3 pps of GDP from the current account balance over the 12-month period. This was offset by the lower energy deficit, which contributed +0.4 pps. Non-energy goods also contributed with a 0.2 pp improvement in the balance, although this reflects a fall in both exports and imports, while non-tourism services and income contributed +0.1 pp.

The price of housing falls. Appraisal prices declines 0.8% quarter-on-quarter in Q1 2020 (+0.9% in Q4 2019). In year-on-year terms, the rate remained in positive territory (+0.3%), albeit markedly below the previous quarter (+2.1%). The real estate market has been heavily affected by the coronavirus crisis, both on the demand side (sales registered a 19% year-on-year fall in March) and on the supply side (as suggested by the collapse in cement consumption in March of 28% year-on-year). However, the situation that the sector was in before the pandemic hit was much more favourable than prior to the previous recession, which provides some confidence over its capacity to recover. 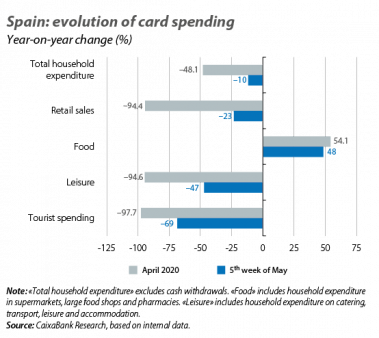 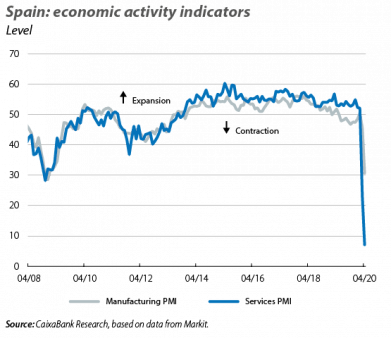 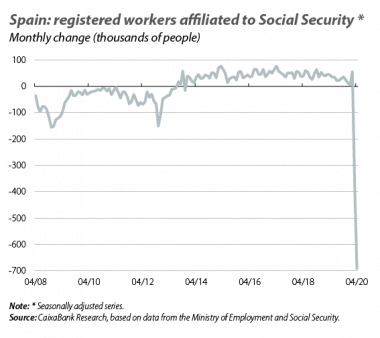 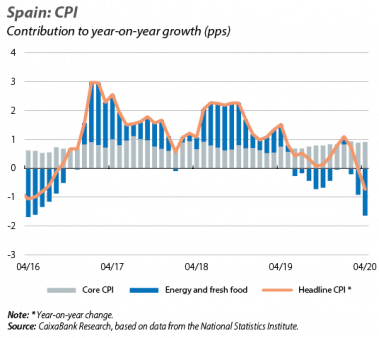 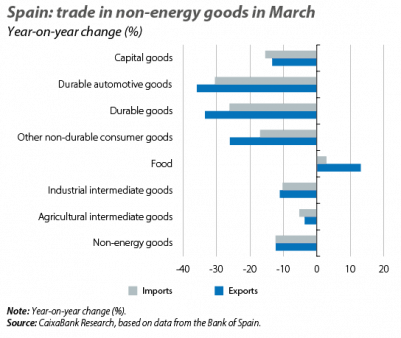 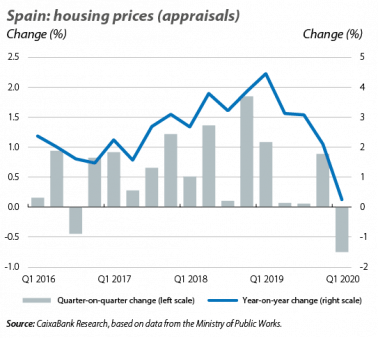