Erratic performance by the financial markets

A more volatile financial environment. After very low volatility for several years, financial markets became more unstable in the first few months of 2018. This was due to expectations of a less accommodative monetary policy stance and fears of increased protectionism at a global level. After spikes in sovereign interest rates in January and equity corrections in February, the main international stock markets remained erratic in March and losses continued. However, while February’s stock market corrections were triggered by expectations of a tighter monetary policy stance by the Fed, March’s losses followed announcements of higher customs tariffs by Trump’s administration, both at the beginning and the end of the month. March’s central bank meetings had little effect on investor sentiment. Both the Fed and the European Central Bank (ECB) stressed the good performance of their respective economies. Consequently, the Fed raised the fed funds rate again in the US while, in the euro area, the ECB, which is at a much earlier stage of withdrawing stimuli, hinted that the end of net asset purchases is getting closer. For the month as a whole, the confidence conveyed by the central banks, supported by a positive macroeconomic environment, contrasted with an increase in protectionist concerns and in the sensitivity of financial asset prices to risk factors related to geopolitics and trade.

The main sources of risk: monetary policy, protectionism and geopolitics. The stock market corrections of the past few months illustrate the predominance of geopolitics, protectionism and the withdrawal of monetary stimuli as risk factors for the global macrofinancial scenario. On the one hand, February’s episode of stock market corrections was triggered by an increase in inflationary fears in the US and the consequent readjustment of investor expectations regarding the Fed’s monetary policy stance. This heightened doubts regarding the potential effect of higher interest rates on the country’s high stock market valuations. Concerns also emerged in March concerning a more protectionist global environment, leading to stock market sell-offs. Both factors, together with a number of international geopolitical conflicts which have been analysed in recent issues of the Monthly Report, will continue to affect the scenario over the coming quarters. Consequently, we should not underestimate the risk of the financial environment remaining more volatile in spite of solid world economic growth.

Stock markets see more losses. In March, the main stock market indices were still erratic and the month saw three sell-off episodes. The first occurred between the end of February and early March, on the US government’s announcement that it would impose stiff tariffs on steel and aluminium imports. After this news, international stock markets experienced a week of losses totalling around 3.5%. Mid-March, equity suffered a second sell-off, this time concentrated among technology firms due to news relating political events, such as the last US presidential elections and Brexit, with the use of personal data from social media. This shorter episode led to the US index NASDAQ falling by more than 2.5% but had less of an effect on the rest of the indices and emerging equity hardly noticed. However, at the end of the month international stock markets went through a third episode of widespread losses among the advanced and emerging economies. This was triggered by further announcements of customs tariffs on imports from China by Trump’s government. In this last episode, US equity fell by more than 3.5% while China saw losses of almost 5.0% and the rest of the international stock markets fell by around 2.0%. As a result,
all the main international stock markets ended the month with losses (S&P 500: –2.7%, Eurostoxx 50: –2.3% and MSCI Emerging: –2.2%).

The Fed continues to tighten its monetary policy stance with another interest rate hike. As expected by investors and analysts, at its March meeting the Federal Open Market Committee (FOMC) raised the target range for the federal funds rate by 25 bp to 1.50%-1.75%. FOMC members were more optimistic about the macroeconomic environment, increasing the projected path of interest rate hikes by end-2019 to two more hikes in 2018 and three more in 2019, which would bring the benchmark rate to 2.75%-3.00% by December 2019. The Fed’s quarterly update of the macroeconomic situation was also presented at this meeting. This substantially lowered the unemployment rate forecast, which is expected to remain well below its long-term level over the next few years. There was no substantial movement by the markets on receiving the news from this meeting. In fact, based on futures contracts, financial asset prices already assume a total of three interest rate hikes in 2018 (in line with the Fed’s projections). However, for 2019 they still reflect expectations of between one and two hikes, slightly below the path indicated by the Fed.

The ECB takes another step towards ending its asset purchase programme. At its March meeting, the ECB’s Governing Council (GC) decided to reflect its greater confidence in inflation’s recovery with a less accommodative message. This is a way of indicating to investors that they should prepare themselves for a less expansionary monetary stance in the future. In particular, the GC stressed that the euro area’s good economic performance over the past few quarters and indicators pointing to the continuation of this positive dynamic make it more likely that inflation will gradually recover. The ECB therefore decided, firstly, to slightly raise its growth forecasts for the euro area as a whole. Secondly, the GC removed from its official communication the explicit reference to the possibility of increasing the size and/or duration of its net asset purchases. It has therefore started to alter its forward guidance, gradually conveying to investors expectations of a less accommodative monetary stance in the future. However, the ECB also repeated its commitment to keep interest rates unchanged for a long period of time. This, together with the fact that, by reinvesting assets as they mature, it will still have a significant presence in the markets even after net asset purchases have ended, reinforces expectations that monetary stimuli will be withdrawn very gradually. Such messages helped to push down the sovereign risk premia for the euro area’s peripheral countries. Also, Spain’s sovereign debt interest rates were particularly helped by the S&P’s revision of its credit rating, which was raised by one notch (from BBB+ to A–), maintaining a positive outlook.

The dollar weakens against the main advanced currencies. The dollar embarked on a slightly downward trend for the month of March as a whole, losing 0.7% against a basket of the main international currencies. The euro appreciated 0.9% against the US dollar and reached USD 1.23, while the Japanese yen rose by 0.4% against the US currency and the pound sterling by more than 1.8%, up to USD 1.40. Among the emerging currencies, while the Mexican peso appreciated by more than 3.5% against the dollar, the Brazilian real and Turkish lira both depreciated, by more than 2.0% and 3.9% respectively. Moreover, in the case of Turkey, Moody’s downgraded its sovereign rating early in the month (from Ba1 to Ba2) and highlighted the deterioration in the country’s institutional quality and macroeconomic imbalances.

Oil prices recover strongly. Although oil prices remained stable at around USD 64 per barrel during the first few weeks of March, the last 10 days of the month saw a notable upswing to USD 70 per barrel. This increase of almost 8.0% was driven by the publication of data pointing
to a faster reduction in US crude oil stocks, as well as more speculation regarding the US imposing economic sanctions on Iran. 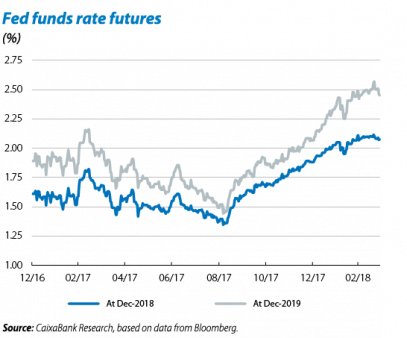 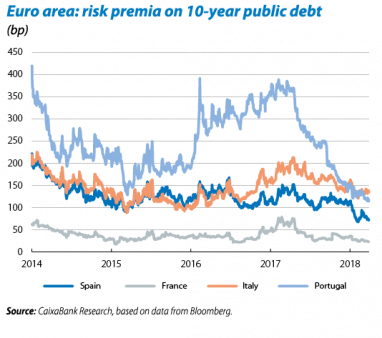 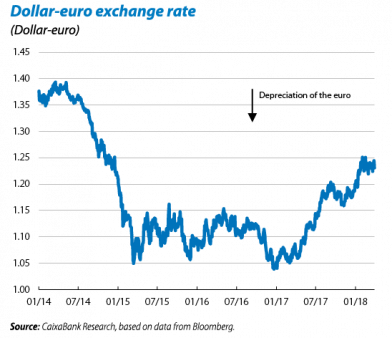