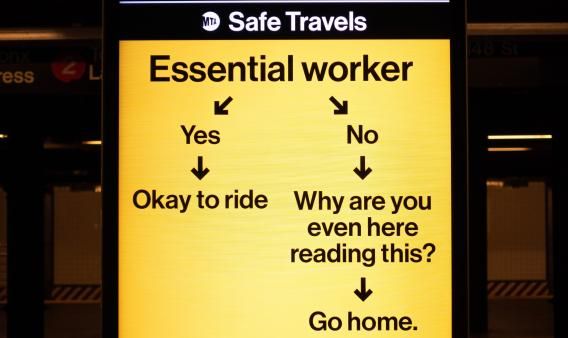 We are living in truly extraordinary circumstances. The struggle to contain the epidemic has led to an unprecedented shutdown of much of the economy in more than half the world. In this situation, the objective of economic policy must be twofold: on the one hand, to support the healthcare response by mobilising whatever resources are necessary. On the other hand, it must prevent what is essentially a transitory shock from causing a lasting contraction in economic activity.

This second objective requires decisive actions in order to mitigate the impact endured by households and businesses. It has been said that it is necessary to «keep the productive fabric of the economy alive», prevent companies from failing and ensure that jobs are not destroyed. But the objective has to be even more ambitious still: not only must the productive fabric of the economy be kept alive, but it must emerge from this situation with sufficient strength to ensure a quick recovery. If households and businesses emerge from this crisis with a significantly weakened financial position, demand will suffer, there will be companies that will not last long and a portion of the jobs that are saved today will end up being lost.

We must be aware that the fiscal cost of the measures necessary to avoid a long recession could be very high. Ideally, the cost should be in line with the drop in GDP. In the end, the other side of the coin of a drop in GDP is a decline in the income of wage earners and the self-employed, as well as in business profits, unless there is a flow of public funds to offset it. One problem is that, at the present juncture, there is great uncertainty over just how much GDP could shrink by this year, as this will essentially depend on when the pandemic can be considered largely under control and at what pace we can get back to life as «normal». In the best case scenario, GDP could fall by just a few percentage points, but we cannot rule out a much bigger fall, even of two digits.

The programmes announced in recent weeks by European governments, including that of Spain, are a step in the right direction, but it is likely that they will need to be expanded. Facilitating and supporting temporary staff lay-offs, or «ERTEs» as they are known in Spain, relaxing the conditions for the right to receive benefits for unemployment or the cessation of activity, granting moratoriums on credit repayments, offering guarantees and postponing the collection of taxes are essential. However, if the impact of the health crisis on GDP is greater than a few percentage points, further steps will be necessary. These could include prolonging some ERTEs and improving the coverage offered to workers, writing off taxes and social security contributions to lighten the burden of costs and strengthen companies’ solvency in the hardest hit sectors and, given the risk of massive destruction of temporary contracts over the coming months, incentivise their renewal.

This fiscal response should be an effort shared by all EU countries and, in particular, those that share the single currency. Not all euro area countries can afford the fiscal relaxation that this crisis demands. This may be because their deficit or level of debt is too high, but renouncing monetary sovereignty also deprives them of the support that a central bank of their own could offer as a lender of last resort. This is why many of us have been saying for some years now that the monetary union must be completed with a fiscal union. If we do not do this now, when are we going to do it? Unfortunately, this topic remains anathema in many countries, which insist on offering, at the most, loans to countries in need with some degree of conditions attached.

In the absence of a joint fiscal effort, the alternative is a more or less explicit monetisation of public deficits. The programme of debt purchases recently announced by the ECB, an enhanced version of Mario Draghi’s «whatever it takes», is a step in this direction. Christine Lagarde made a mistake when she said that the central bank was not there to close spreads between the debt of the various countries of the monetary union – she herself immediately acknowledged this. In fact, I fear that this will be one of the ECB’s main tasks if we do not take decisive steps towards a fiscal union.