An uneven recovery is underway

As the summer draws to an end, the global macroeconomic outlook has cleared, with the availability of both Q2 growth data and economic activity indicators for the period all the way up to August. If we had to summarise the recent pattern in a word, it would be «normalisation». In other words, what we are witnessing is a gradual shift towards phases of the businesses cycle less affected by the COVID-19 pandemic in many economies. Less affected does not mean that there is no impact whatsoever (the effects of the Delta variant are still among us). It also does not mean that all countries are in the same position in this shift towards the long-awaited «normalisation». In general terms, China and, far behind, the US are making progress in this direction, so the slower pace of economic activity indicated in the latest data should be taken in this context (although they are certainly also affected in part by the aforementioned Delta variant and the corresponding restrictions). In other economies, particularly in Europe, the recovery, and thus this «normalisation», is in an earlier phase. Moving towards a less atypical 2022

The above trends look set to continue, and with the progress in the vaccination campaigns and in the absence of new variants of the virus that evade the effects of the vaccines, we can expect 2022 to continue to produce historically high global growth rates, but without the oscillations seen in 2020 and 2021. In this regard, the IMF’s latest forecasts, which on the whole are in line with those of analysts, indicate global growth of slightly below 5% in 2022 (6.0% expected in 2021), with advanced economies growing at around 4.5% and emerging economies above 5%. The supply disruptions, particularly those affecting global supply chains, which are currently applying significant inflationary pressure in virtually every economy are also expected to fade, and this would confirm the temporary nature of the price shock as foreseen by the central banks and macroeconomic analysts. US economic activity is already above pre-COVID levels

Perhaps the most synthetic way to assess the journey towards the «normalisation» of activity is to look at how far away we are from pre-pandemic GDP levels. In this regard, and after growing by 1.6% quarter-on-quarter in Q2, the first major advanced economy to reach this milestone is that of the US. Although the growth rate was slightly lower than expected, it is nevertheless robust and clearly reflects the effects of the fiscal package approved in mid-March (1.9 trillion dollars) and the reopening of the economy. In the short term, the latter element will remain crucial, while little additional impetus can be expected from economic policy (bearing in mind that the measures already in place in the fiscal and monetary spheres remain exceptional). As fiscal plans materialise, we move towards a new phase for monetary policy

As far as fiscal policy is concerned, as has been said, no changes are expected in the short term, although looking further ahead fiscal activism will not decline. In September, Congress will approve a new package of measures aimed at improving the country’s classic infrastructure. Although the amount proposed is small (equivalent to 0.26% of 2020 GDP annually), it is the first agreement on the proposals presented by the Biden Administration in the spring (the American Jobs Plan, which deals with infrastructure, and the American Family Plan, which has a social focus). In the sphere of monetary policy, the strong labour market data (creation of 943,000 jobs in July) and inflation data (5.4%) open the door for the Fed to announce the beginning of reductions in its net asset purchases (tapering) before the end of the year (see the Financial Markets section). 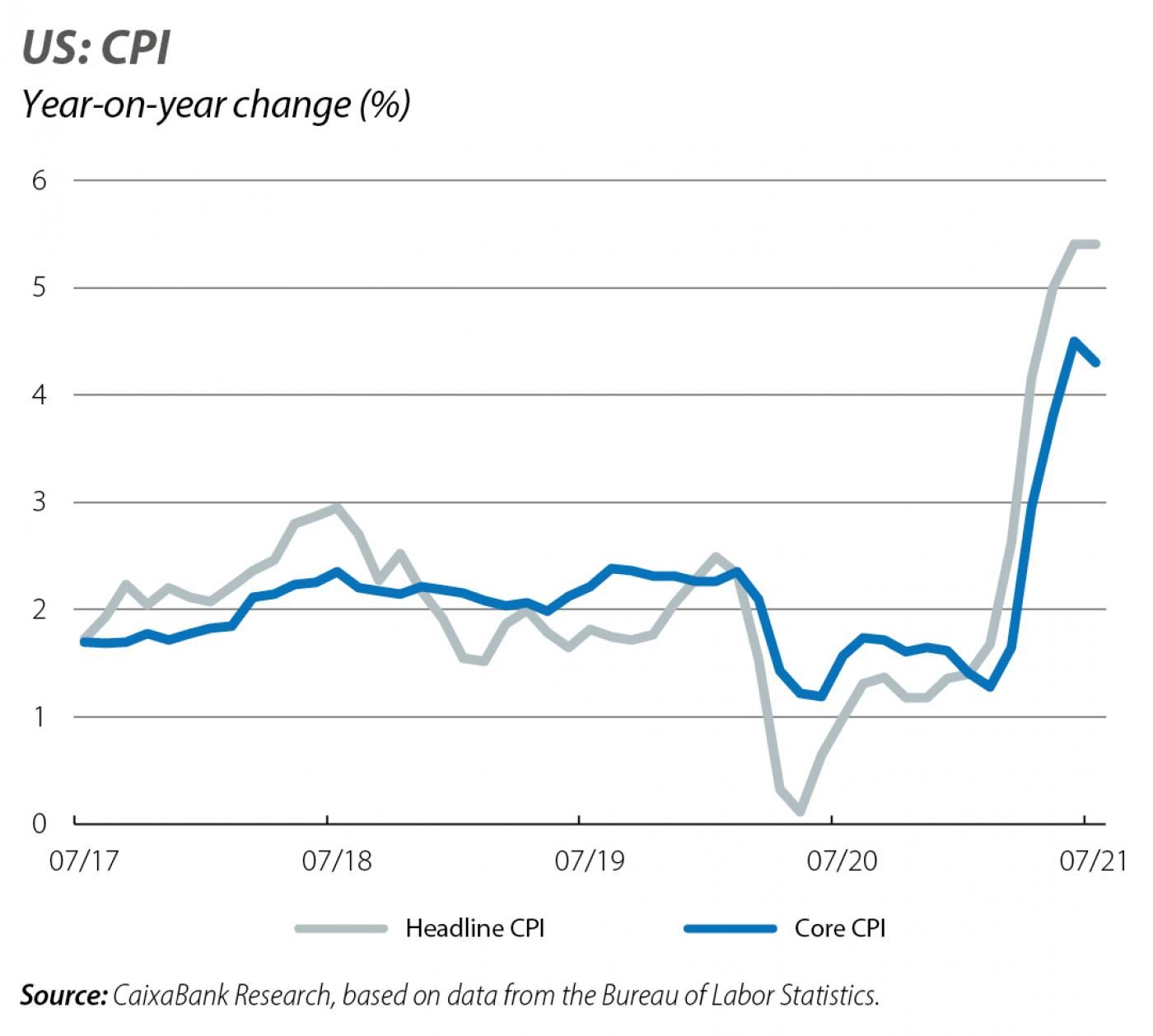 The spread of the Delta variant has already led to some backtracking in the reopening process (as evidenced, for example, by the decline in Germany’s IFO indicator in August). However, its effects on economic activity should be much lower than in previous waves (due to the adaptation of economic players and the high penetration of the vaccines, with around 65% of the population now vaccinated). On balance, growth in the region is likely to be nearing its peak, and we can expect to see a certain «normalisation» in the final months of the year towards more moderate, albeit still high, growth rates. In particular, we estimate a growth of 4.7% for 2021 as a whole and of 4.9% in 2022. These figures will also be supported by the initial disbursement of NGEU funds (the so-called pre-financial disbursements, which amount to 13% of the total and have already arrived in France, Italy, Spain and Portugal, among other countries). In this context, inflation in the euro area has rebounded (3.0% in August vs. 0.9% in January). Inflation will remain volatile for the remainder of the year. However, the rebound reflects transient factors (calendar effects, VAT readjustments, oil) which will fade in 2022. China, in the mature phase of the «normalisation» process

In Q2, GDP grew by a remarkable 7.9% year-on-year (in quarter-on-quarter terms, the growth stood at +1.3%). These figures are somewhat better than expected, attesting to the fact that the economy’s underlying trend is one of solid growth. In this context, it may have come as a surprise that the latest indicators for industrial activity, economic sentiment and exports suggest a certain slowdown in Q3. However, in line with our comments at the beginning, this slowdown can be understood as a movement consistent with the transition towards more measured growth rates (albeit peppered with small episodes of shocks related to the pandemic in some areas), rather than as a shift of trend. This globally positive development leaves ample room for manoeuvre to relax the public stimuli, to continue with the «clean-up» of low-quality debts (a process which, after the pause during the pandemic, was resumed in Q4 2020) and to move ahead with the project of modernising the regulatory framework for big tech firms (a process which, it must be acknowledged, has been received with doubts in the markets). Other emerging economies, at the tail end of the «normalisation» process

Unlike China, other major emerging economies, while making reasonable progress, are still far from plugging the whole in GDP opened up by the pandemic. That said, the figures for Q2 have been encouraging. Specifically, in India GDP went from growing by just 1.6% year-on-year in Q1 2021 to 20.1% in Q2 2021. Although affected by the base effect, this latter figure also reflects the fact that the Delta variant has had a smaller final impact than initially feared. Turkey, meanwhile, registered an increase of 21.7% in its GDP in Q2, having grown by 7.2% year-on-year in Q1. As in the case of the Asian country, Turkey’s recovery was sufficiently intense to offset the restrictions in force during part of the quarter (three-week lockdown). Finally, Brazil’s GDP grew by 12.4% year-on-year in Q2, a clear improvement over the previous quarter’s –1.0%. The outlook for the coming quarters is reasonably positive for all three countries, but in the case of Brazil there is concern regarding the increase in institutional confrontation, and in Turkey, excessive inflation (18.9% in July).