The next year looks set to be a year fraught with challenges. Growth is expected to slow as the economy adjusts to the energy crisis we are experiencing. Against this backdrop, we can only hope that all these adjustments will lead us towards an economy that is better prepared to face the challenges that lie ahead. 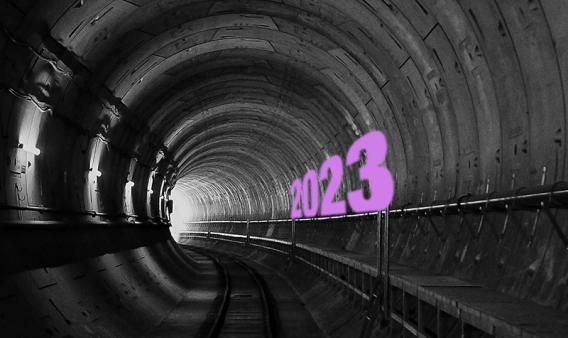 Russia’s invasion of Ukraine has led to the most significant European energy crisis in recent decades. It has triggered a surge in gas prices in Europe, increased the climate of uncertainty, and led to a cycle of aggressive interest rate hikes by the ECB in an attempt to curb the inflation rally. Within the European context, Spain is comparatively well placed to deal with this crisis: our dependence on Russian gas is much lower than that of other major European economies, and our capacity to use liquefied natural gas by means of regasification terminals gives us a greater ability to diversify gas imports.1 Thus, we are unlikely to see episodes of rationing in our country, despite the indefinite cut-off of Russian gas supplies to northern Europe since September 2022. Yet our economy is not immune to the rise in gas prices or to the sharper than expected interest rate hikes. Thus, although this demanding context has failed to slow the recovery of the tourism sector in 2022, it has nevertheless hampered the execution of the NGEU funds, owing at least in part to the drop in the demand for investment in the face of greater uncertainty, while the rise in inflation has eroded the buffer provided by the excess savings inherited from the pandemic.

To illustrate what lies behind our outlook for the Spanish economy in 2023, we have broken down our 1.0% GDP growth forecast into the main contributing components (see first chart). In the absence of the geopolitical conflict, the outlook for 2023 would have been quite encouraging: the cyclical boost from the economic recovery effect and the impact of the European funds would have driven the economy to grow by around 4%.

However, the energy crisis has pushed up energy prices, led to a sharp rise in inflation and triggered a cycle of aggressive interest rate hikes. While we expect the adverse impact of the rise in energy prices on economic growth to have peaked in 2022, it is in 2023 that we expect the impact of the higher inflation and interest rates to reach its climax. 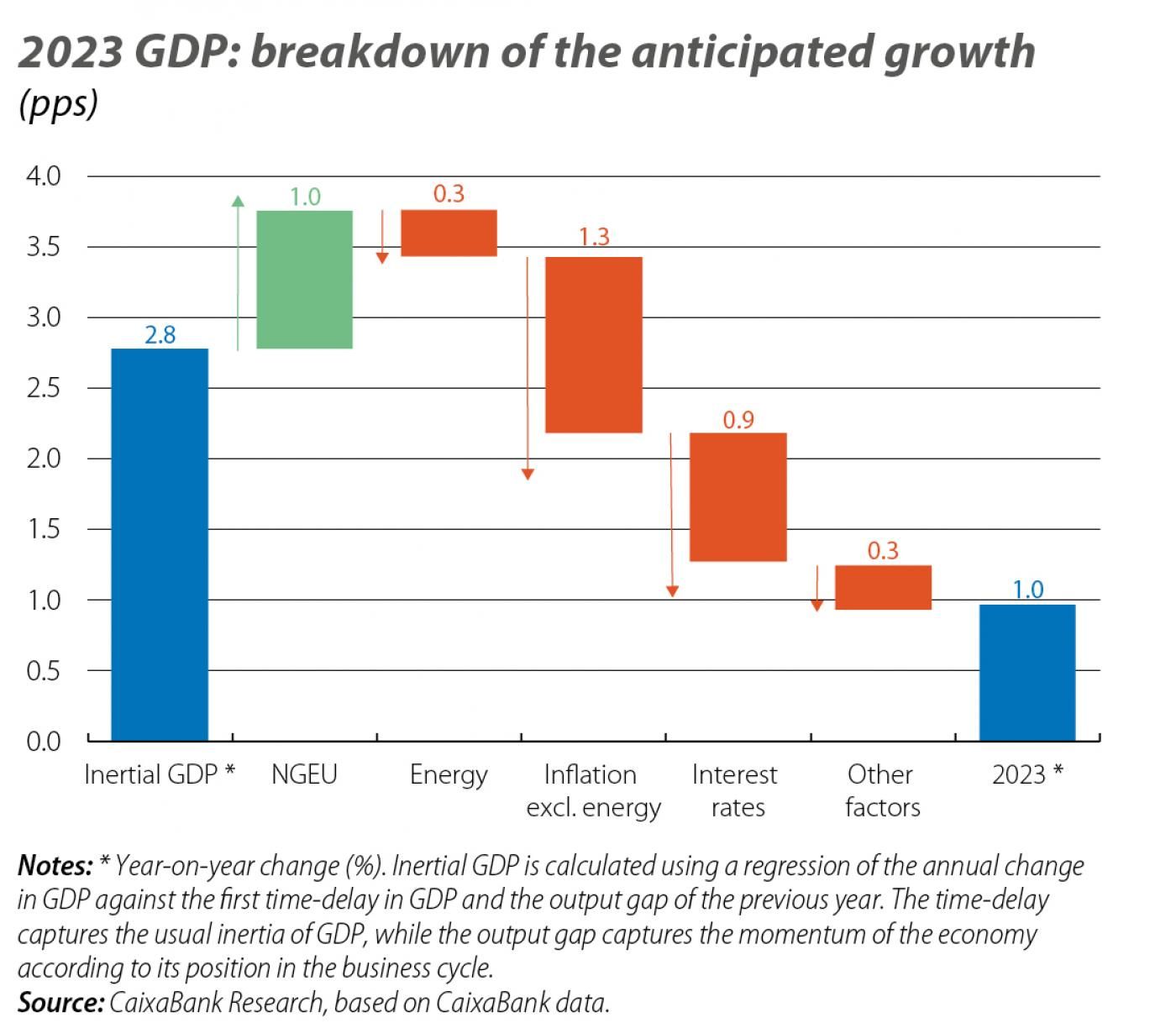 Starting with energy prices, the MIBGAS gas price has risen from an average of around €50/MWh in 2021 to one of around €110/MWh between January and September 2022 – slightly more than double. For 2023, we expect the price to continue to climb, albeit to a lesser degree.2 Given that energy prices rose more sharply in 2022 than they are expected to in 2023, the increase in energy prices has had a greater impact in 2022 (when we estimate it subtracted just over 1 pp from GDP growth) compared to that expected in 2023 (–0.3 pps). It should be noted, however, that the recent fall in gas prices – due to the measures announced by the European Commission to impose a cap on the price, as well as the high temperatures this autumn – could mean lower energy prices in 2023 than those assumed in our scenario, and thus a lower impact of this factor on growth.

Secondly, inflation, excluding the energy component, is expected to remain high at around 5%, largely due to the indirect effect which the rise in energy prices has on other components of the consumer price index. According to our estimates, this channel could subtract around 1.3 pps from growth. To some extent, this assessment incorporates the rise in inflation accumulated from the previous year. Think in terms of expectations: if the inflation rally was initially assumed to be only transient, then the impact on growth in the early stages of the shock would have been limited, given that economic agents would not have significantly altered their spending decisions. However, as time passes and those agents witness the greater persistence of the price rally, they adjust their spending decisions more, resulting in a greater macroeconomic impact.

Finally, the cycle of rate hikes embarked on by the ECB in July 2022 will have its greatest impact in 2023, as it takes a few quarters for its effects to fully materialise, and this is expected to subtract around 1 pp from GDP growth in 2023. It should be recalled that the ECB is expected to raise rates by around 300 bps between July 2022 and March 2023; an increase of such magnitude and speed is unprecedented since the euro entered into circulation.

We end our discussion by analysing the impact of inflation on purchasing power and how we can expect household consumption to evolve. As can be seen in the second chart, inflation is expected to have a substantial negative impact on household purchasing power, given that gross disposable income in real terms has fallen significantly in 2022 and we do not expect it to recover in 2023. Furthermore, the aforementioned rise in interest rates will also impact consumption, as households with loans exposed to interest rate fluctuations will have to allocate a larger portion of their income to servicing their interest payments. Thus, the loss of purchasing power and the rise in rates leads us to anticipate that real consumption will remain virtually stagnant in 2022 and will likely register negative growth in 2023, potentially exceeding –0.5%.3 This decline would not only reflect the evolution of the factors which determine consumption in 2023, but it would also capture the change in expectations regarding the persistence of the shocks experienced in 2022.

All in all, 2023 looks set to be a year fraught with challenges. Growth is expected to slow as the economy adjusts to the energy crisis we are experiencing. Against this backdrop, we can only hope that all these adjustments will lead us towards an economy that is better prepared to face the challenges that lie ahead. 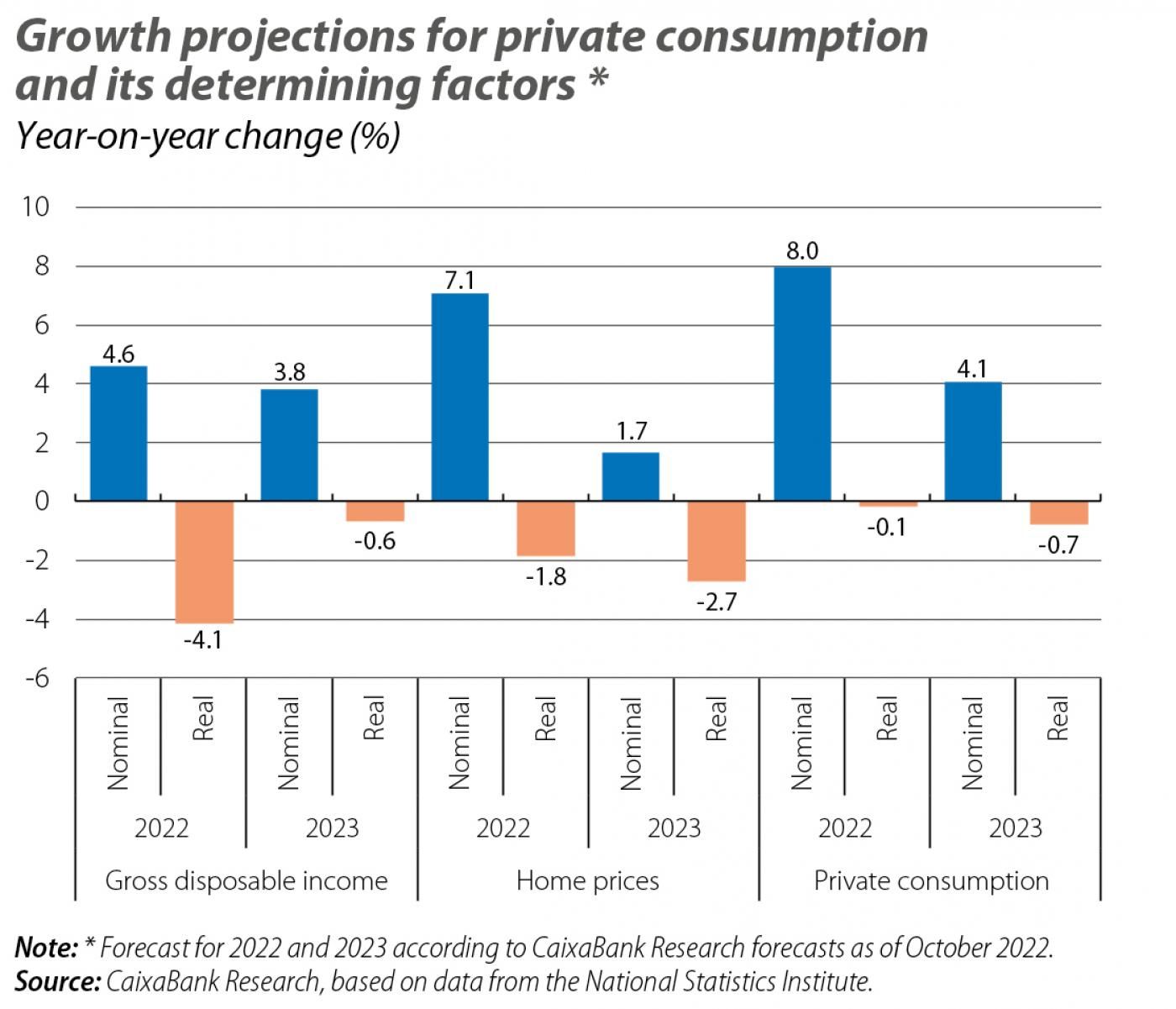