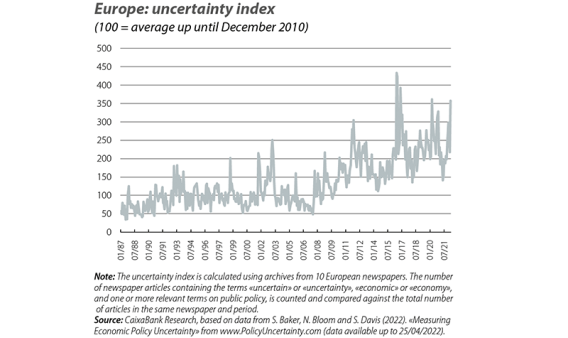 Global impact of the Russia-Ukraine conflict

With no sign of a truce in the invasion of Ukraine, the multiple economic effects of the war continue to add up. The recent surge in the price of the major commodities is rapidly translating into higher inflation, which will dent households’ purchasing power and lead to the global economy growing significantly less than was expected a few months ago. In this regard, the IMF cut its growth forecasts for the global economy by 0.8 pps for this year and by 0.2 pps for 2023, anticipating growth of 3.6% in both years (3.5% and 3.7%, respectively, are our projections here at CaixaBank Research). By geographic area, the biggest adjustment affected emerging economies, with their growth being cut by 1 pp this year (to 3.8%, according to the IMF) due to the collapse of the Russian economy (expected to shrink by more than 8% this year) and weaker growth in India and China. Uncertainty will remain the key factor in this macroeconomic environment, particularly in Europe, where it has reached levels similar to those seen at the start of the pandemic and following the Brexit referendum. Economic activity indicators in the EU show signs of weakness

In a turbulent Q1 2022, still marked by the outbreaks of the Omicron variant and the outbreak of the war in Ukraine, euro area GDP growth managed to remain in positive territory, advancing by 0.2% quarter-on-quarter (5.0% in year-on-year terms). Yet, growth figures are somewhat uneven from country to country. On the downside, France disappointed by stagnating relative to the previous quarter and Spain grew less than we had anticipated (0.3% quarter-on-quarter, see the Spanish Economy section). On the other hand, Germany provided a positive surprise by growing by 0.2% and avoiding a technical recession in the first half of the year. The impact of the war in Ukraine, however, will begin to become more visible in Q2 2022. Indeed, the March and April confidence indicators, although above expectations, show a clear deterioration in economic agents’ expectations. In particular, households are being affected by inflation, while industry is feeling the impact of the high commodity prices and persistent global bottlenecks. On the other hand, the services sector continues to be favoured by the boost from the lifting of health-related restrictions. In this context, it should be noted that the French presidential elections gave a landslide victory to Macron, with 58.5% of the votes in the second round against Le Pen. This result will provide stability to the markets at a time when uncertainty in Europe due to the war in Ukraine is very high. 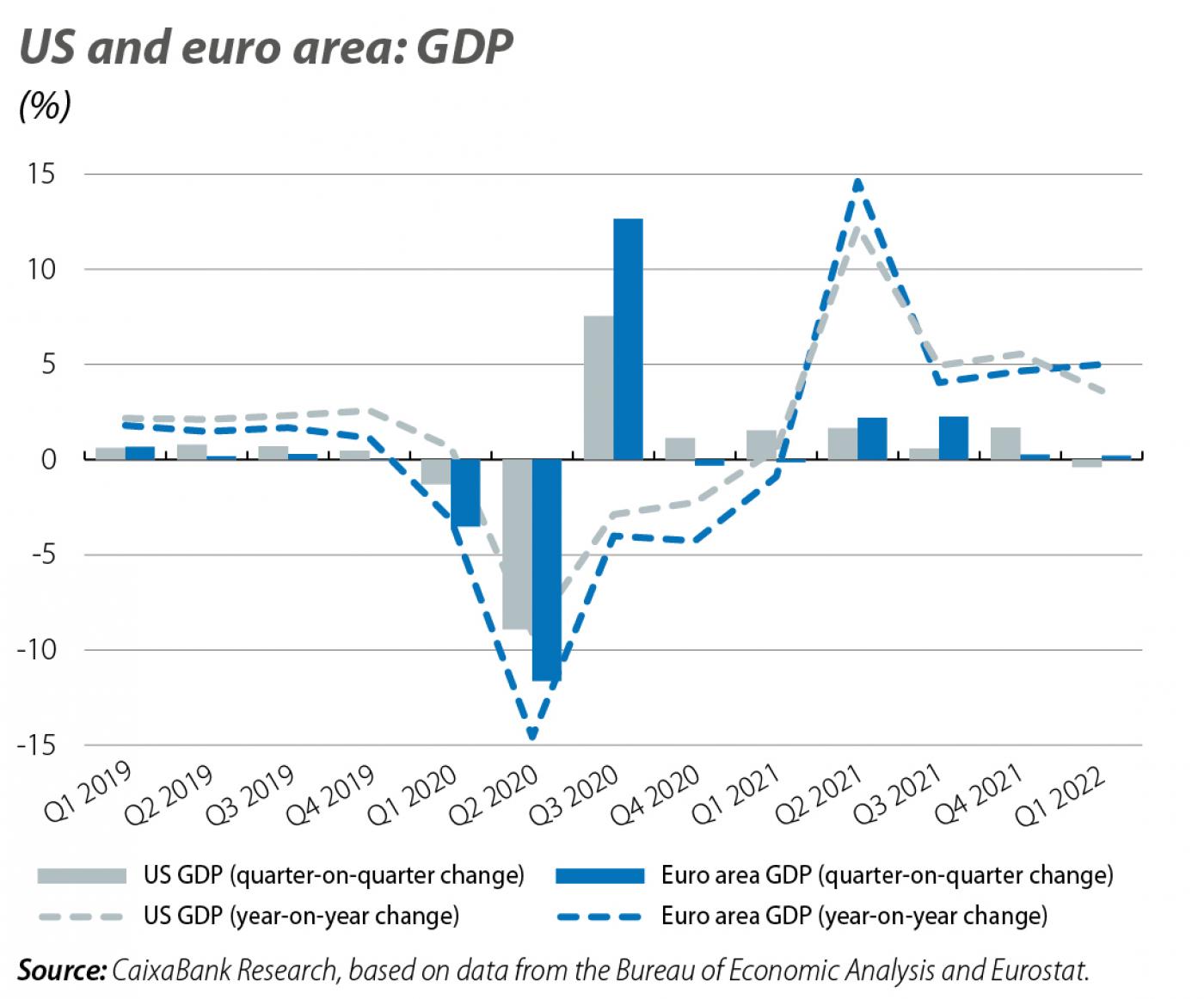 Inflation: the high energy prices are spreading to the rest of the components and core inflation reaches 3.5% in the euro area

Headline inflation rose by 1 decimal point in the euro area, bringing it to 7.5%, while core inflation rose to 3.5%, representing a 0.6-pp increase in a single month. The latest data suggest that the increase in energy prices is rapidly spreading to the other components of the consumer price index, which will lead to further pressure on the ECB to accelerate its monetary policy normalisation process (see the Financial Markets section). Both food prices and those of goods and industrial services registered significant year-on-year increases this month. Despite the slight cooling in energy prices, as a result of both base effects and reduced tensions in the main commodity markets, inflation is expected to remain high in the coming months and the core components could still rise a few more decimals. On the other hand, in the US there are some signs that inflation could be approaching its peak. In March, headline inflation reached 8.5% year-on-year (compared to 7.9% in March), primarily as a result of the increase in the energy component. Thus, core inflation rose to 6.5% (6.4% in February). US: unexpected fall in GDP in Q1, but with encouraging signs from consumption

US GDP fell by 0.4% quarter-on-quarter in Q1 2022 (+3.6% in year-on-year terms), in contrast with the 1.7% quarter-on-quarter growth in the previous quarter. This change of gear is mostly explained by the negative contribution from the foreign sector and the change in stocks. Domestic demand, meanwhile, continued to register strong growth, favoured by the strength of the labour market and the savings accumulated in recent years. Specifically, private consumption grew by 0.6% quarter-on-quarter (versus 0.7% in Q4 2021) and business investment accelerated, with non-residential investment up 2.2% quarter-on-quarter (versus 0.7% in Q4 2021). In April, the monthly data continue to withstand the uncertainty, although the risks to the US economy are by no means insignificant: the pandemic itself, the persistence of inflationary tensions and the risks surrounding the monetary normalisation process initiated by the Fed. The Chinese economy in lockdown

China’s GDP grew by 4.8% year-on-year in Q1 (versus 4.0% in Q4 2021), following a recovery in January and February. However, the economic activity data for March suggest a significant weakening of the economy. This downward trend has been exacerbated by the recent lockdowns in many important cities in the country, as a result of the circulation of the Omicron variant and the maintenance of a strict zero-COVID policy. Thus, retail sales declined by 3.5% year-on-year in March, the first fall since July 2020. China’s official manufacturing PMI fell by more than 2 points in April to 47.4 points, its lowest level since February 2020, while the Caixin manufacturing PMI also registered a marked decline, falling by the same amount. The official non-manufacturing PMI, meanwhile, plummeted to 41.9 points in April (48.4 in March), also marking the lowest level in business confidence since February 2020. This weakness at the heart of the Asian supply chain will undoubtedly be felt in global supply chains, which are already heavily stressed and are also affected by the conflict in Europe.