A first semester ending with good news, but also with some uncertainty on the horizon

Although the restrictions were gradually eased during the course of Q2 2021, the incidence of infections remained contained in June, ending the month with a 14-day cumulative infection rate of 100 cases per 100,000 inhabitants. New confirmed daily cases also stabilised in June at around 4,000, well below the average of almost 26,000 cases reached in January or those observed in April and May (with 7,700 and 5,500 daily cases on average, respectively). Despite a rebound in cases in some regions and among younger age groups in recent weeks, the rate of positive test results remains below 5% (having reached over 15% in January), and the vaccination rate rose in June to around 7,000 weekly immunisations per 100,000 inhabitants. Over the coming months, the pandemic will continue to be the major determining factor for the outlook. The immunisation of age groups over 50, which represent 90% of all hospitalisations, is expected to be completed within the next few weeks. With the emergence of new and potentially more contagious strains – such as the Delta variant – rapid progress in the vaccination roll-out will be vital in alleviating pressure on the health system while achieving a sustained revival in economic activity. Economic activity took off in Q2, driven by the vaccinations

Amid the third wave of the pandemic in Europe, GDP contracted by 0.5% in Q1 2021. However, as the constraints on economic activity were gradually lifted, most of the available economic activity indicators began to accelerate rapidly in Q2. In particular, the PMI sentiment indices for the manufacturing and services sectors both stood above 60 points in June. The recent improvement was most significant on the services side, having climbed above 50 points (the threshold separating contraction from expansion) in April for the first time since July 2020. In this environment, following an 8% drop in Q1, the CaixaBank consumption indicator decreased by just 1% between April and June. This improvement was observed in the level of spending registered on both Spanish (+8 pps) and foreign cards (+7 pps), with changes of +4% and –52% compared to pre-COVID levels. The remaining indicators also recovered in Q2, including cement consumption, which in May stood 3.5% above the same month of 2019, following a 3.7% year-on-year decline in Q1. The recovery is thus taking a gear – or W-shaped look, hoping to have finally surpassed its last turning point. The revival of the labour market intensifies

The number of workers registered with social security rose by 1.2% in June, corresponding to the incorporation of over 230,000 people in the month, surpassing the previous record registered in July 2020. The number of people on ERTE furlough schemes declined (–84,205, on a monthly average), causing the number of registered workers not on furlough to increase by 317,000 in the month. On the other hand, in June we witnessed a historic fall in registered unemployment, of 166,911 people. With these data, the number of unemployed exceeds 600,000 and effective employment stands some 476,700 people below the levels observed in June 2019. However, the latest trends in the labour market place the Spanish economy on a very encouraging path to recovery, with a rapid revival in the sectors hardest hit by the restrictions on activity. With economic recovery on the horizon, watch out for inflation

The CPI registered a year-on-year increase of 2.6% in June, according to the National Statistics Institute’s flash estimate. This figure puts average inflation for the year to date at 1.6%, its highest since 2018. Core inflation, meanwhile, remains at very contained levels of around 0.2%, its lowest since 2014, giving rise to a K-shaped inflation trend. The recent rally in the price index is largely influenced by the rise in energy prices. This in turn is a consequence of higher commodity prices and higher carbon emissions in international markets, as well as being driven by more short-term factors, such as the base effects resulting from the sharp declines recorded last year. Looking ahead to the coming months, the contained level of core inflation could give way to greater buoyancy while the base effects gradually fade. 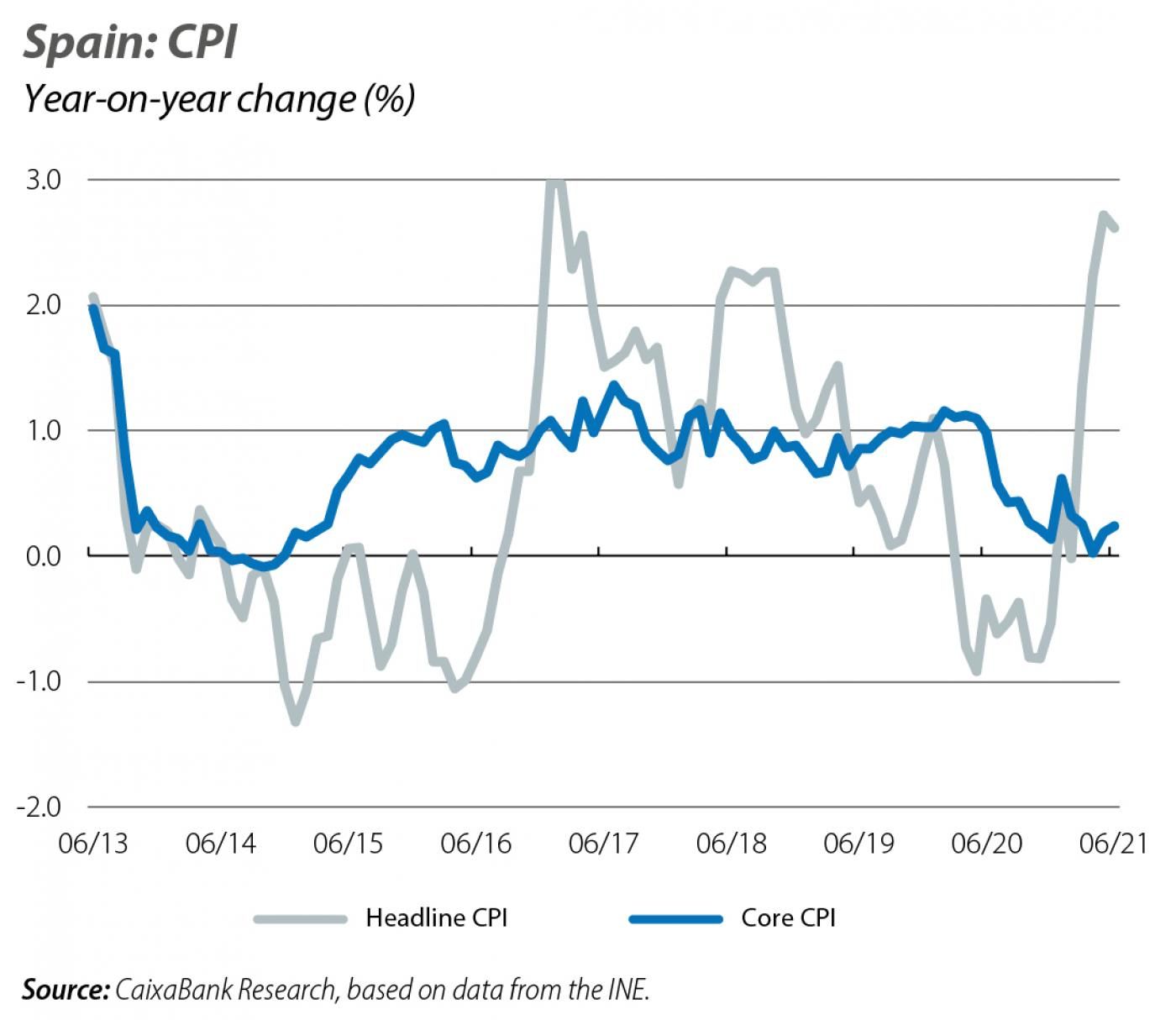 The current account is recovering, driven by a record high balance of goods

The current account stood at 0.7% of GDP in April, giving continuity to the encouraging trend already visible in previous months. In April, both exports and imports continued to recover and registered year-on-year changes of –1% and –8%, respectively, on a 12-month cumulative basis. The deficit in the balance of goods stood at –0.8% of GDP, an improvement of around 1.7 pps compared to April 2020. Most notably, the surplus of non-energy goods reached 0.6% of GDP in April, its highest level since 2015. A substantial portion of the improvement observed in the balance of goods is due to the lower energy deficit, which will be undone by the rise in energy prices and as the Spanish economy recovers. Nevertheless, the recovery in the balance of services, particularly tourism, could also facilitate an improvement in the current account balance during the course of the year. 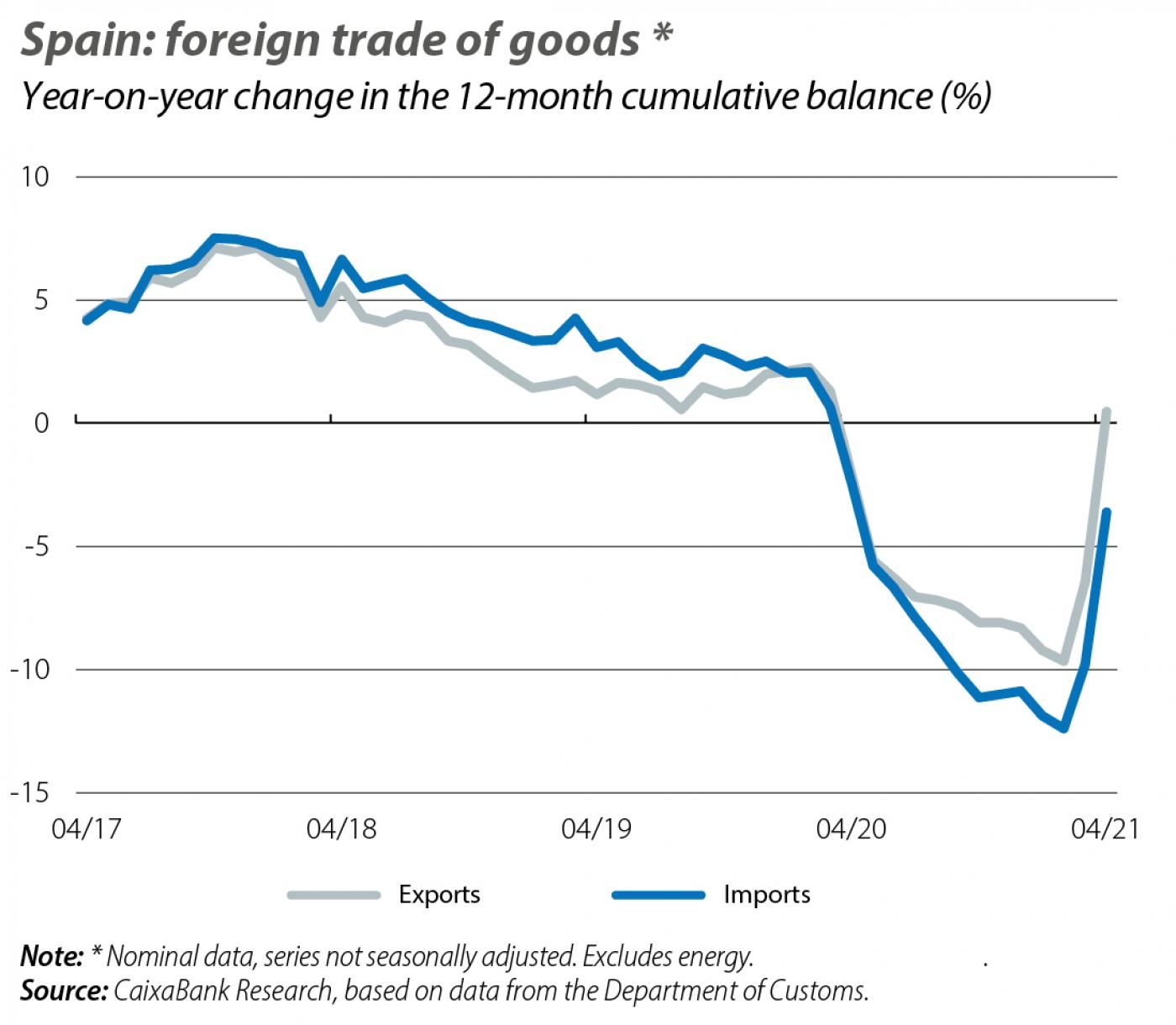 The public accounts remain heavily affected by the pandemic; the real estate sector less so

The general government deficit (excluding local public corporations) stood at 1.8% of GDP in April. This places it some 0.7 pps below the level observed in April 2020 but 1.3 pps above the deficit of April 2019. The decline compared to 2020 is explained by the increase in government revenues between January and April, with a year-on-year change of 5.4%, largely driven by a significant 10.5% increase in tax revenues. On the other hand, the trend in the housing price index (HPI) supports the buoyancy of the real estate sector. House prices in Spain increased by 0.9% year-on-year in Q1 2021, a 0.6-pp slowdown compared to the previous quarter. The rise in prices of new homes slowed sharply (from 8.2% in Q4 2020 to 2.3% in Q1 2021), but continues to grow above the second-hand housing market, which registered an increase of 0.7%. 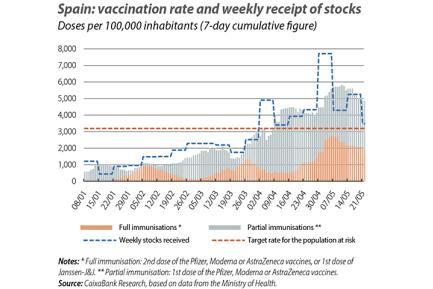