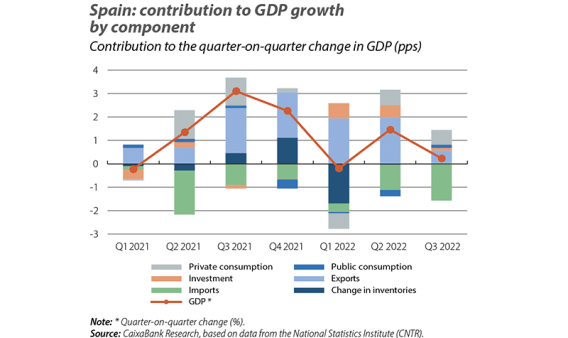 The preliminary GDP figure published for Q3 of this year shows a moderation in the Spanish economy’s growth rate, suggesting an increasingly difficult macroeconomic environment, as we anticipated. GDP grew by 0.2% quarter-on-quarter (3.8% year-on-year), a much lower figure than in the previous quarter (1.5% quarter-on-quarter). On the one hand, this figure reflects the fact that the boost provided by the fading impact of the pandemic has been exhausted, while on the other hand it shows the difficult environment that the Spanish economy is currently enduring. This environment is marked, firstly, by high inflation rates; secondly, by a cycle of interest rate hikes that is more aggressive and abrupt than expected a few months ago; and, thirdly, by the deterioration in confidence relating to the economic outlook. Looking ahead to 2023, we forecast that the growth rate of the Spanish economy will slow to 1.0% year-on-year. 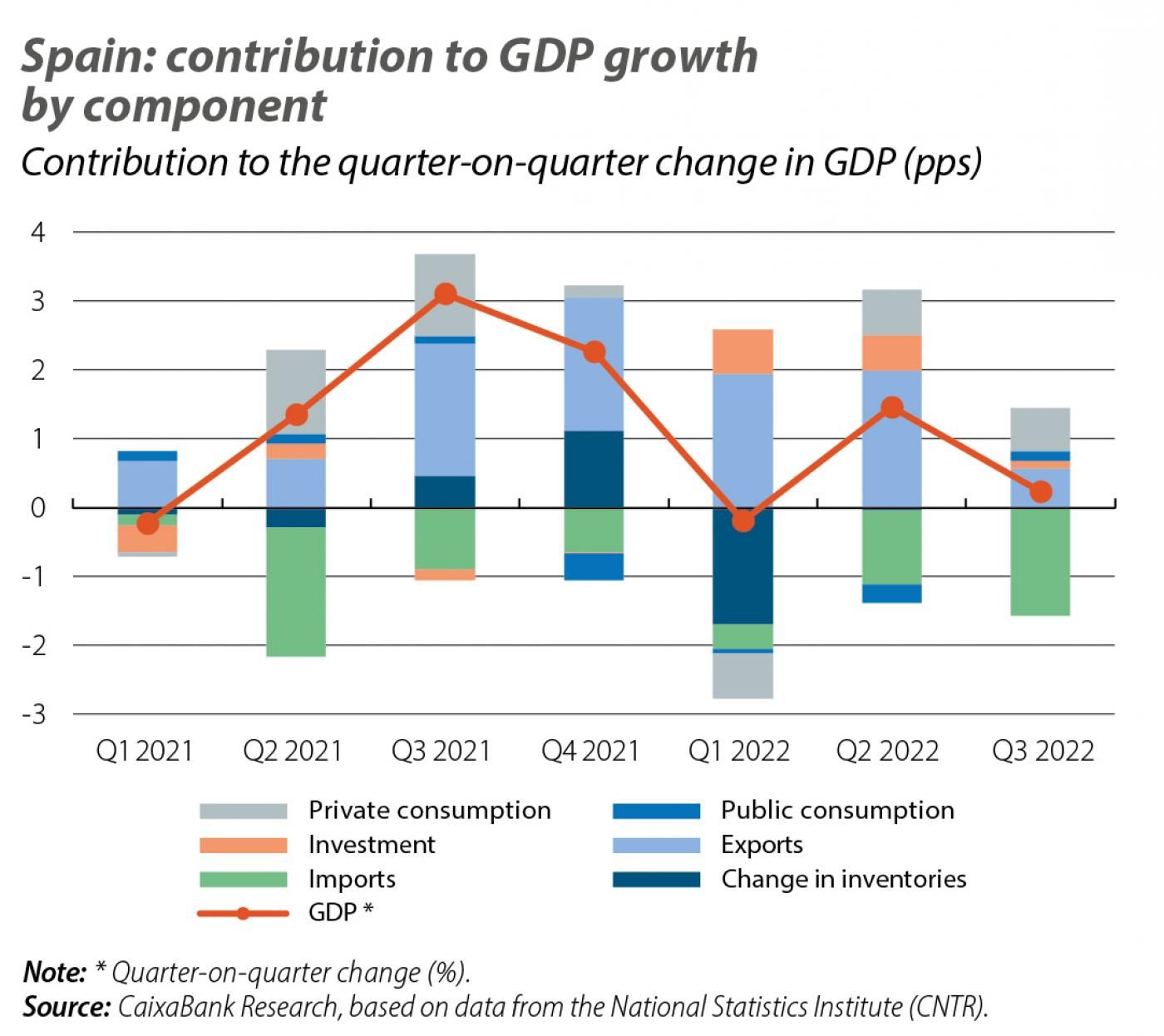 The summer quarter ended with a level of overnight stays in tourist accommodation establishments just 1.3% below that of the summer of 2019, compared to a gap of –27.7% in the summer of 2021. International tourism continued to improve rapidly, reaching a level of overnight stays and tourism spending that was just 5.9% and 3.1% below the same period of 2019, respectively. Domestic tourism reached a volume of overnight stays 6.6% higher than in 2019, although, with more people taking trips abroad, it was 5.2% lower than in the summer of 2021. With a view to 2023, we expect tourism activity to continue to grow and exceed the 2019 level, supported by an improvement in air mobility in Europe, overcoming the episode of airport saturation experienced in the summer, as well as by the recovery of long-haul tourism. 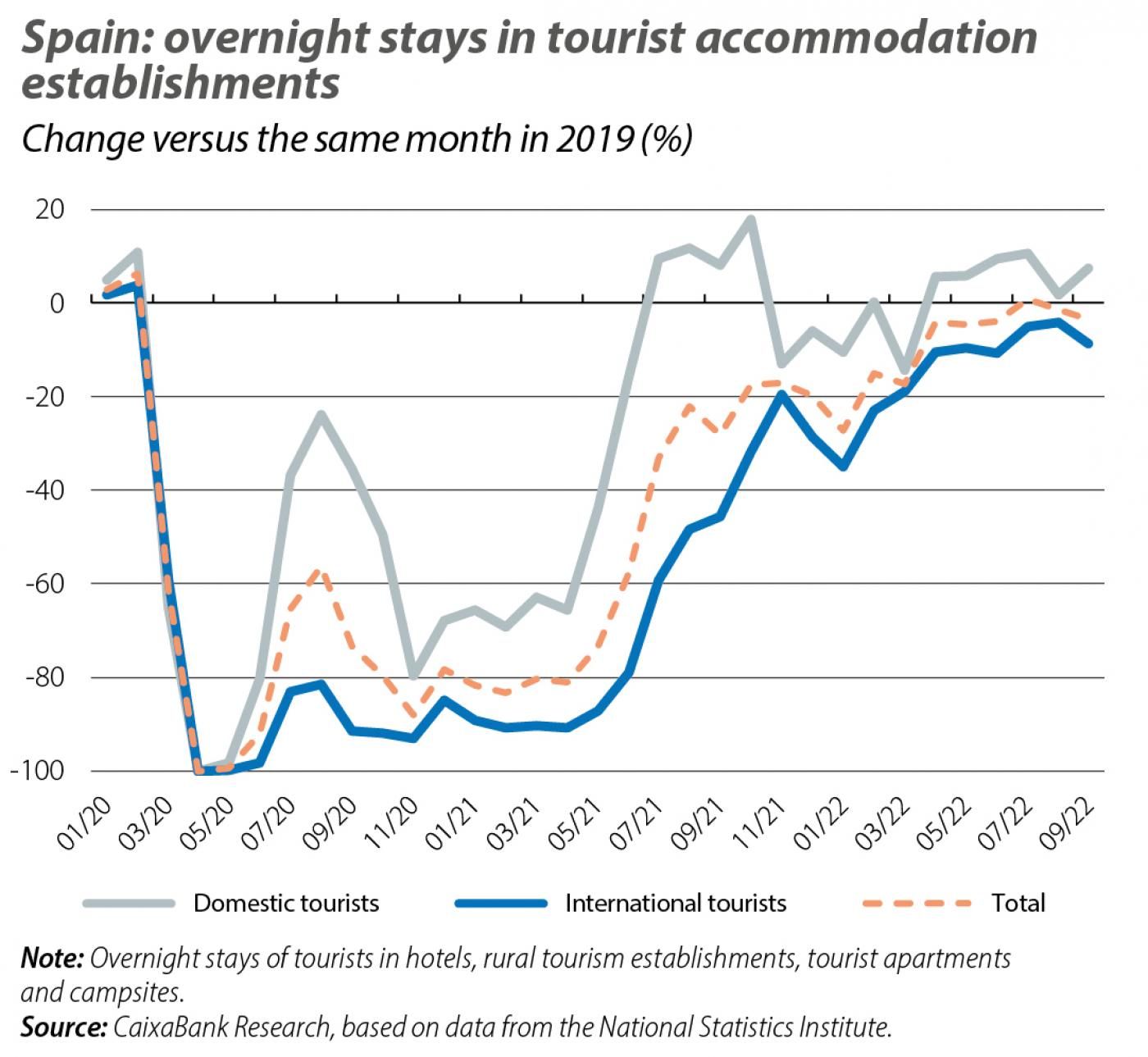 The labour market is holding up better than expected, although it will lose steam in 2023

The October data for social security affiliation show that the labour market remains resilient despite the challenging macroeconomic environment. In particular, the number of registered workers grew by 103,499 people in October, higher than the «usual» figure for October (on average, social security affiliation grew by 82,200 in the month of October between 2014 and 2019). On the other hand, the effects of the labour reform continued to be reflected in the change in the rate of temporary employment. Specifically, it fell to 15.7% (27.6% in October 2021), marking a new all-time low, thanks in part to the use of discontinuous permanent contracts rather than temporary ones. Registered unemployment fell by 27,027 people during October. This is a very encouraging development, given that unemployment usually tends to increase in October (by 69,000 people on average in 2014-2019).

Against this backdrop, we anticipate a slowdown in the labour market in 2023, albeit still with positive job creation (+0.5% compared to 2022). As for the unemployment rate, we expect a slight rise of 3 percentage points versus 2022, bringing it to 13.1%. 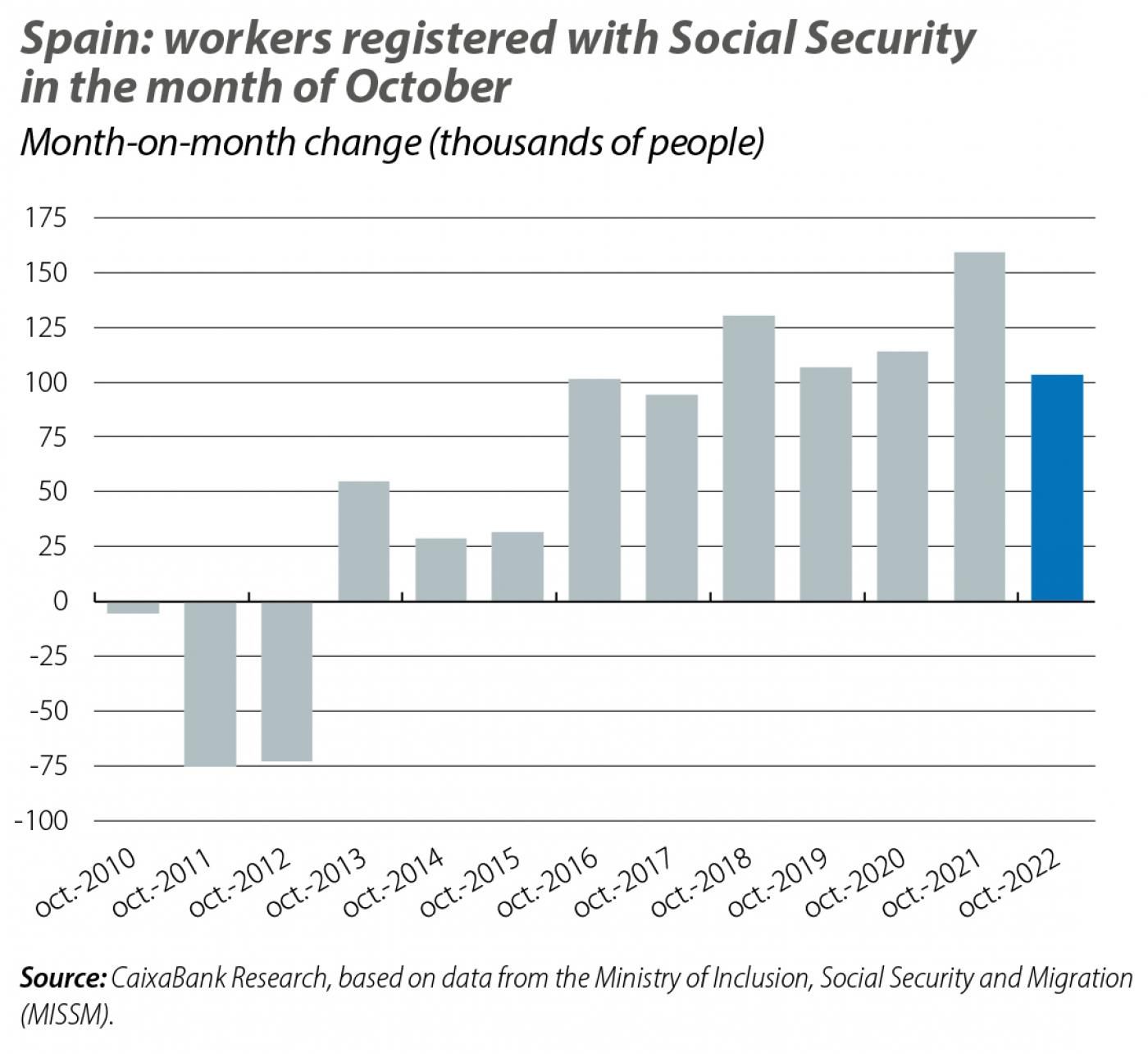 Inflation provides a respite thanks to the energy component, but it will remain high in 2023

According to the CPI flash estimate, headline inflation fell sharply in October and stood at 7.3%, 1.6 pps below the figure for September. Underlying inflation (excluding energy and unprocessed food), meanwhile, remained stable at 6.2% (the same figure as in September). The National Statistics Institute noted that the main reason for the moderation in inflation was the fall in electricity prices, which, according to data from the national grid operator Red Eléctrica de España, reached lows not seen since August 2021. This reduction in electricity prices has been driven by the collapse in the Iberian benchmark gas price (MIBGAS), which fell by 46% in October as a result of the filling of gas reserves and the low consumption due to the high temperatures. As temperatures begin to fall, we foresee a rebound in benchmark gas prices. Looking ahead to 2023, we expect inflation to remain high, at 4.5%, due to the persistence of core inflation. 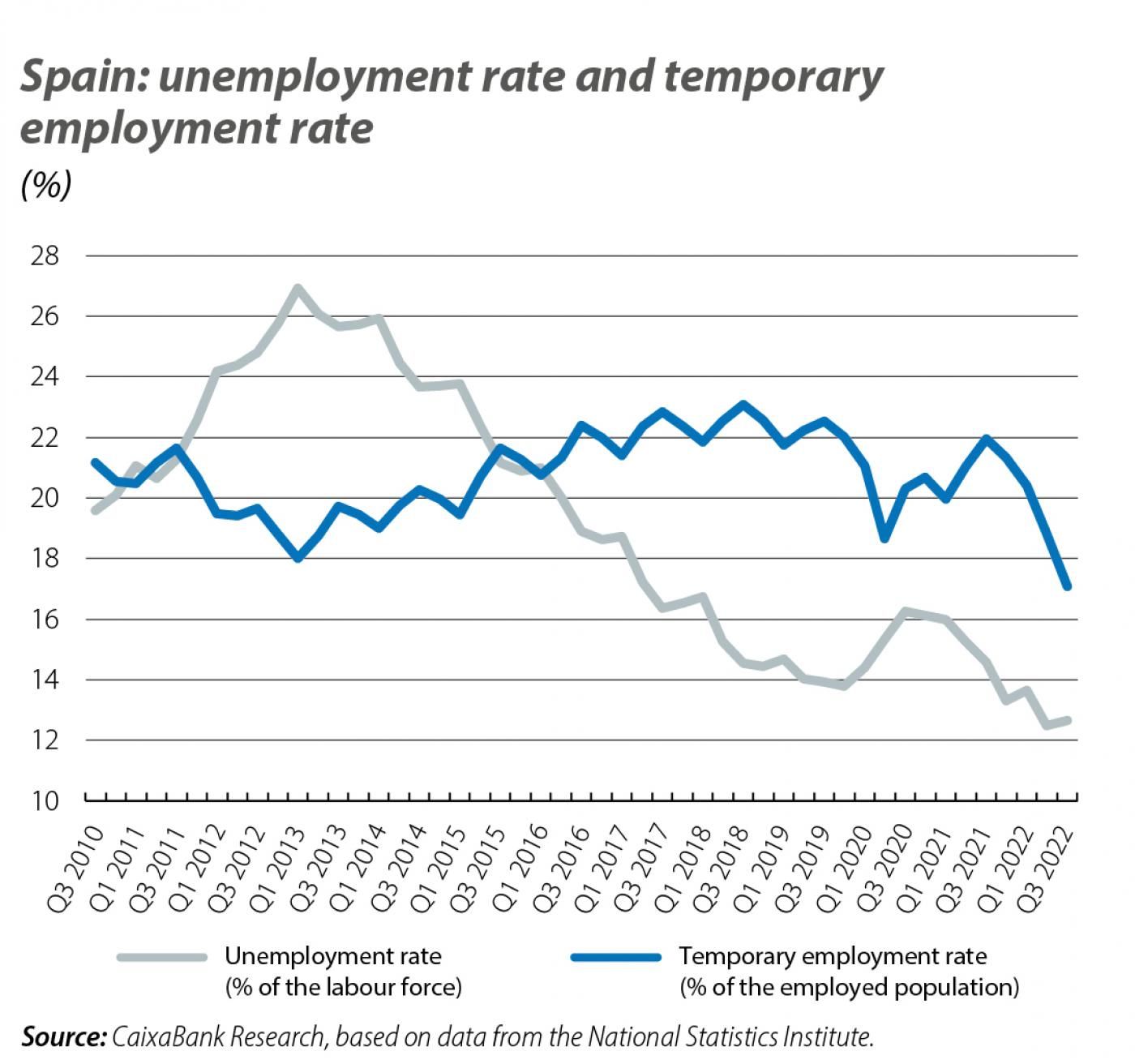 First signs of lower buoyancy in the housing market, which will experience a slowdown in 2023

Home sales remain high (640,000 in the last 12 months to August), but growth moderated to 15% year-on-year in August, compared to 23% in the first half of the year. In 2023, we expect the housing market to cool, although the absence of imbalances makes a sharp correction unlikely. Specifically, we expect sales to fall by just over 10% in 2023 (to around 480,000 homes), with a slowdown in prices (according to the index by the Ministry of transport, mobility and urban agenda) to an annual growth rate of 1.5%, which in real terms would be a considerable adjustment (–5.6% on a cumulative basis in 2022-2023).

On the other hand, housing supply remains limited: the number of planning permissions granted (108,000 units in the last 12 months to August) falls short of net household creation (180,000 per year to Q2 2022). One factor limiting the recovery of post-pandemic supply has been the sharp rise in construction costs. Recently, the upward trend in costs seems to have slowed (15.1% year-on-year in August, compared to a peak of 19.5% in May). The decline in industrial metal prices on the international markets suggests we will see more contained rises in construction costs going forward. 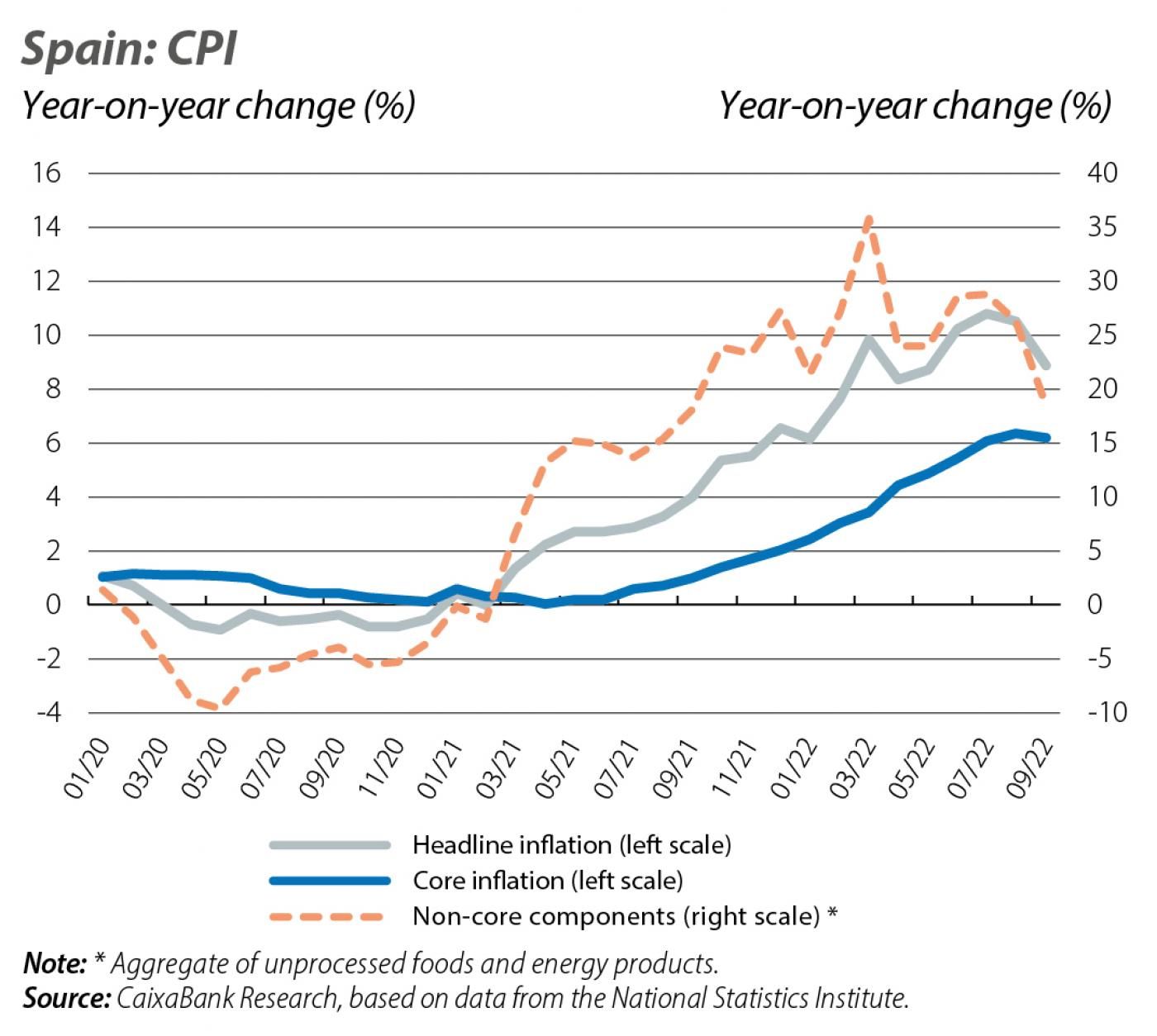 In terms of the general government deficit, a deficit of 3.9% of GDP is expected in 2023, which represents a 1.1 pp. reduction compared to the deficit projected for 2022. The bulk of this reduction is expected to be driven by the autonomous communities (deficit of 0.7 pps less in 2023), while Social Security would maintain a deficit of 0.5% in 2023. Due to the high uncertainty surrounding the outlook, the Budget Plan delivered to the European Commission included an additional scenario to accompany the 2023 General Government Budget. This second scenario is more in line with the budget execution data for this year and also incorporates more plausible assumptions (e.g. extension of the tax cuts on electricity during 2023). In this second scenario, government revenues are expected to increase by 35 billion euros in 2023 (+6.2% year-on-year), thanks to the strength of tax collections and social security contributions. On the expenditure side, public expenditure is projected to increase by 23.7 billion euros in 2023, 3.8% more than in 2022, due to a significant increase in structural expenditure (mostly on pensions) (see the Focus «The public accounts in 2023: increase in revenues and also in expenditure» in this same report). 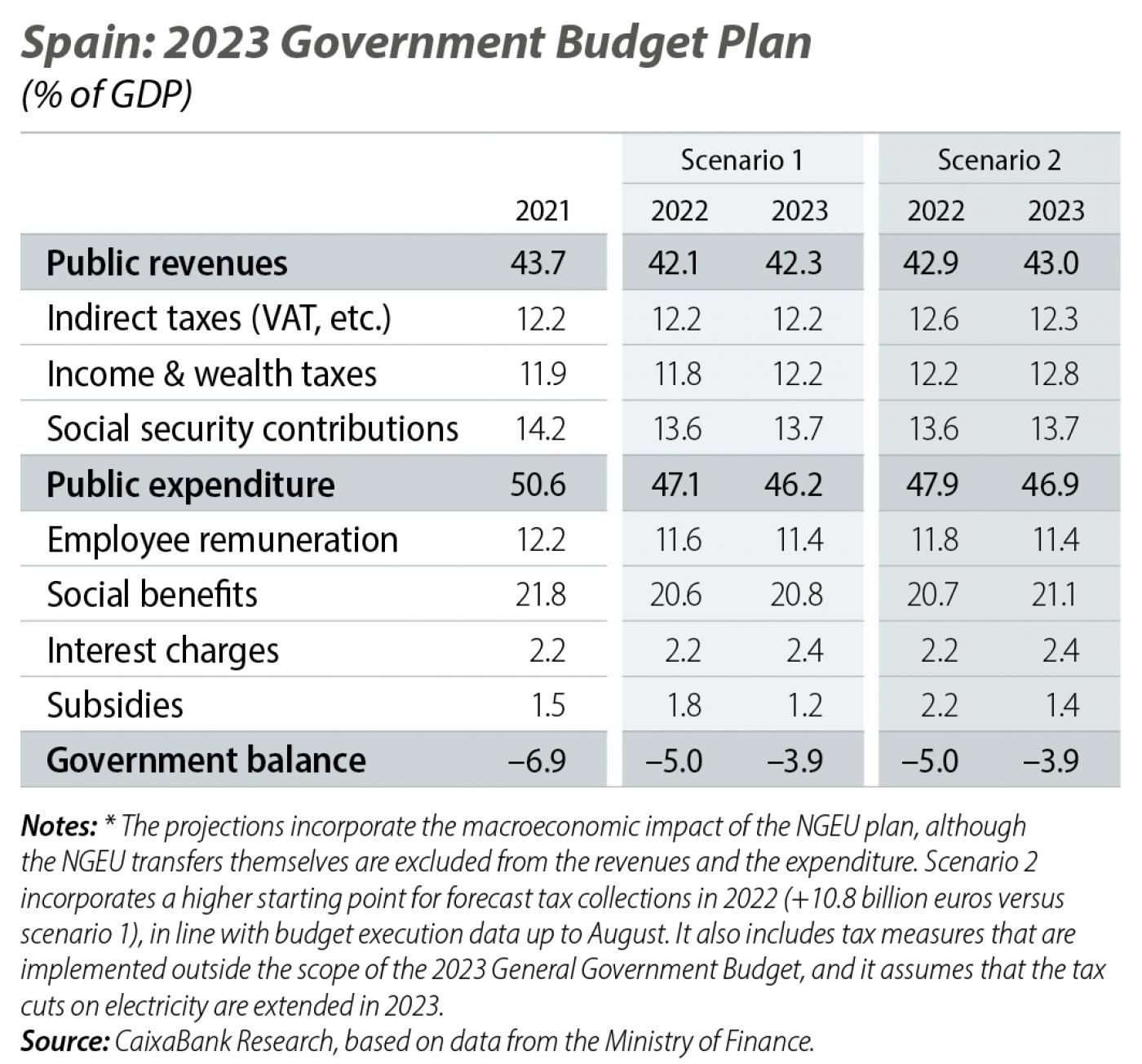 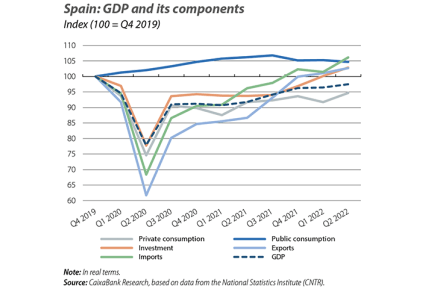 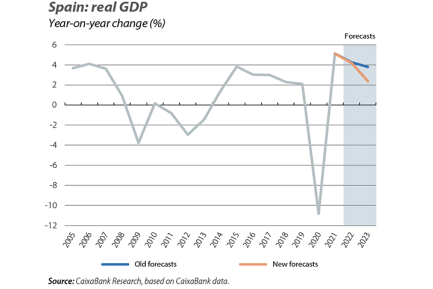