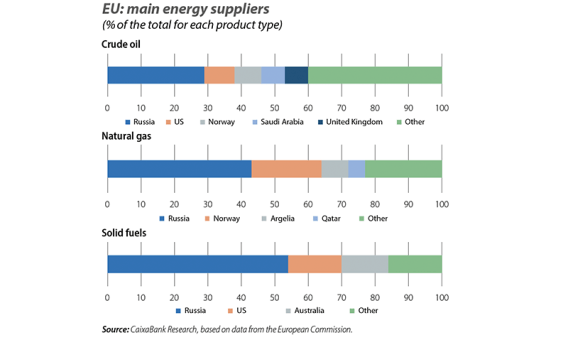 The war in Ukraine continues to constrain the international context

The war in Ukraine continues to constrain the international context, not only because of the heightened uncertainty but also due to the consequences of oil and gas becoming «weaponised». Indeed, Western powers are seeking to limit Russian energy exports in an effort to reduce the country’s financial resources, while the EU is seeking alternatives in order to reduce its dependence on Russian energy. Russia, meanwhile, is responding by seeking alternative markets for its crude oil (mainly India and China), while cutting its gas exports to Europe. These dynamics are introducing significant volatility into the energy markets and uncertainty into the economic outlook, with oil and gas prices sky-rocketing, having accumulated increases of over 130% and 45%, respectively, so far this year up to the beginning of July. 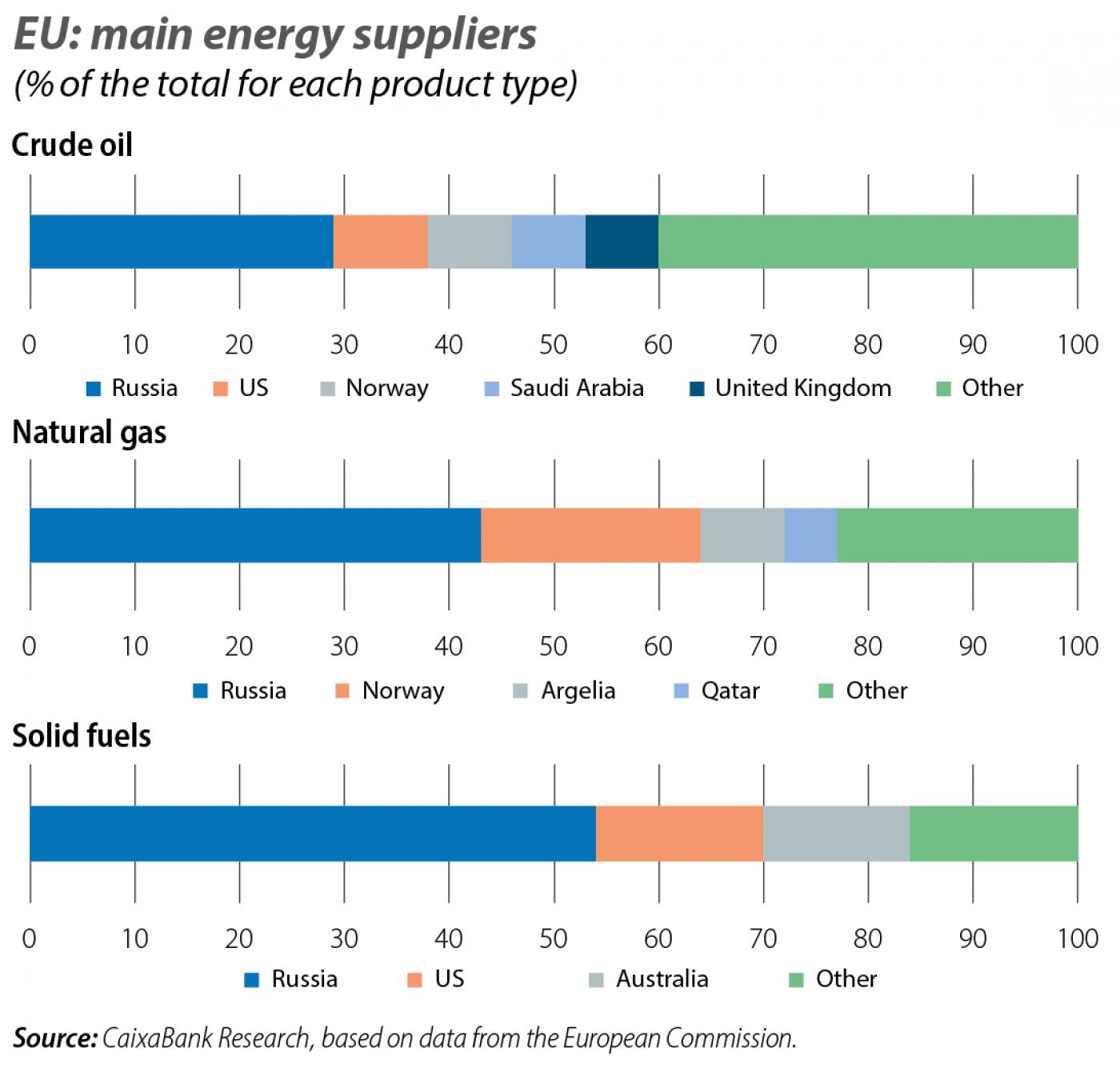 Central banks face the difficult challenge of getting the current high inflation under control, in an attempt to get the economy to make a «soft landing». However, the aggressiveness of the rate hikes that are anticipated (especially in the large developed economies) in order to contain inflation expectations raises the risk that the much-feared stagflation could materialise in 2023. This is not our baseline scenario yet, although the expectations of higher inflation and interest rates explain the revision of our forecast scenarios across the board. In our case, we have raised our inflation expectations in all countries and regions, both for 2022 and for 2023. We have also substantially cut our growth forecasts for the US and the euro area for next year, which would reduce the growth expected in 2023 for developed countries as a whole by 0.7 pps, to 1.6%. The forecast for emerging markets in 2023, meanwhile, remains unchanged at the 4.7% published in June. In fact, the higher growth expected in the case of energy and agricultural exporters, thanks to the sharp rise in the price of these products, will offset the deterioration of net importers, while we keep China’s growth forecast for next year unchanged at 5.2%. As a result, we continue to expect global growth of 3.2% in 2022, while we have revised the estimate for 2023 down by 0.3 pps to 3.4%. 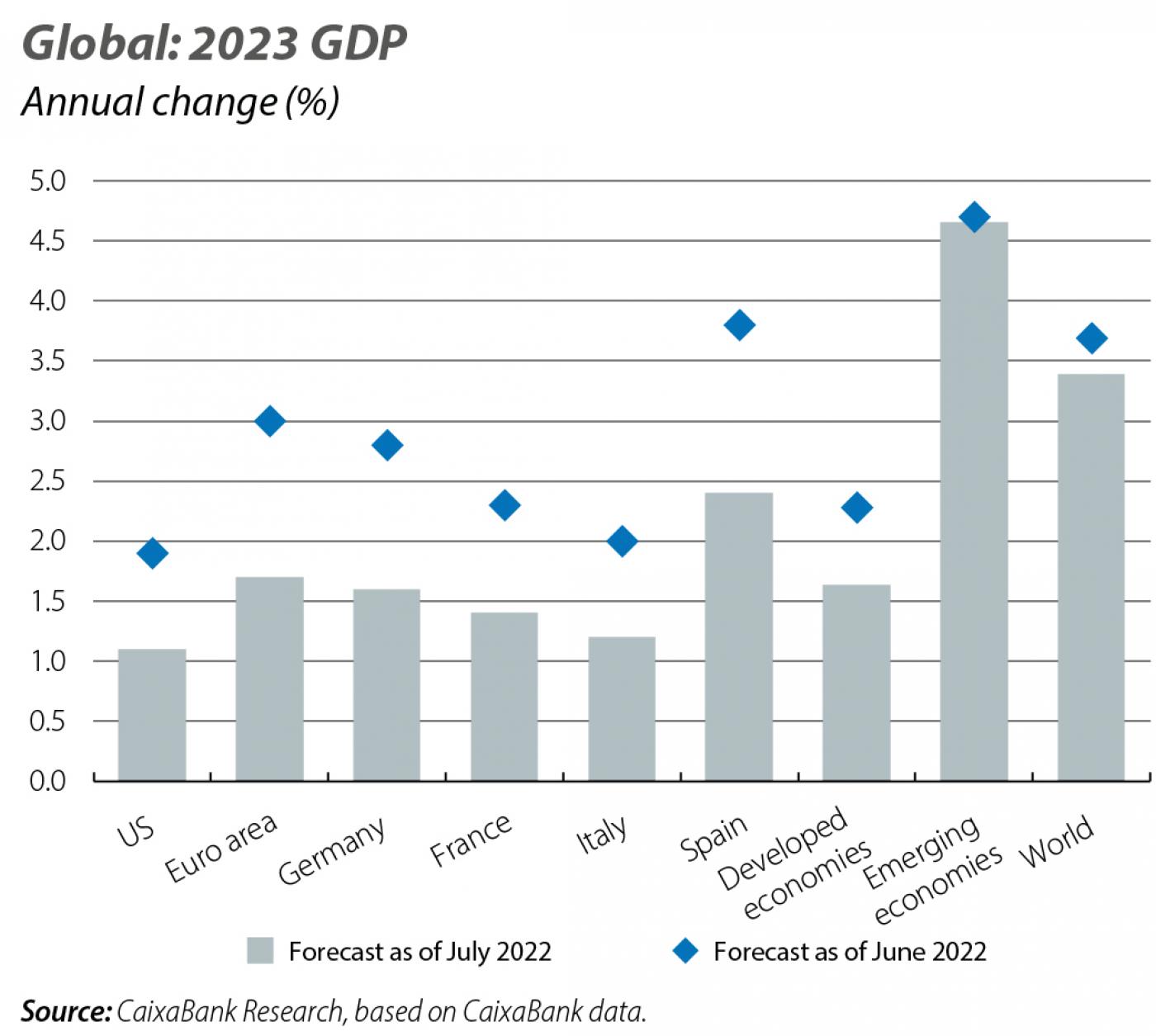 In the US, the indicators point to a certain improvement in economic activity in Q2, although the risks remain high

Following a disappointing start to the year (–0.4% quarter-on-quarter in Q1), the economy could feasibly grow at around 0.5% in Q2. Consumption will remain very strong, supported by a robust labour market (the unemployment rate stands at just 3.6%) and the use of the savings accumulated by households in previous months (the savings rate dropped to 5.4% in May, compared to 8.0% in Q4 2021) (see the Focus «US: how can the pent-up savings support the economy?» in this same report). However, the disappointing performance of the main sentiment indicators in June cools expectations for the end of this year. Much of this less optimism is driven by fears fuelled by the continued rise in costs and the high inflation (in May, headline inflation stood at 8.6%, with core inflation at 6.0%), as well as the sharp tightening of financial conditions by the Fed. 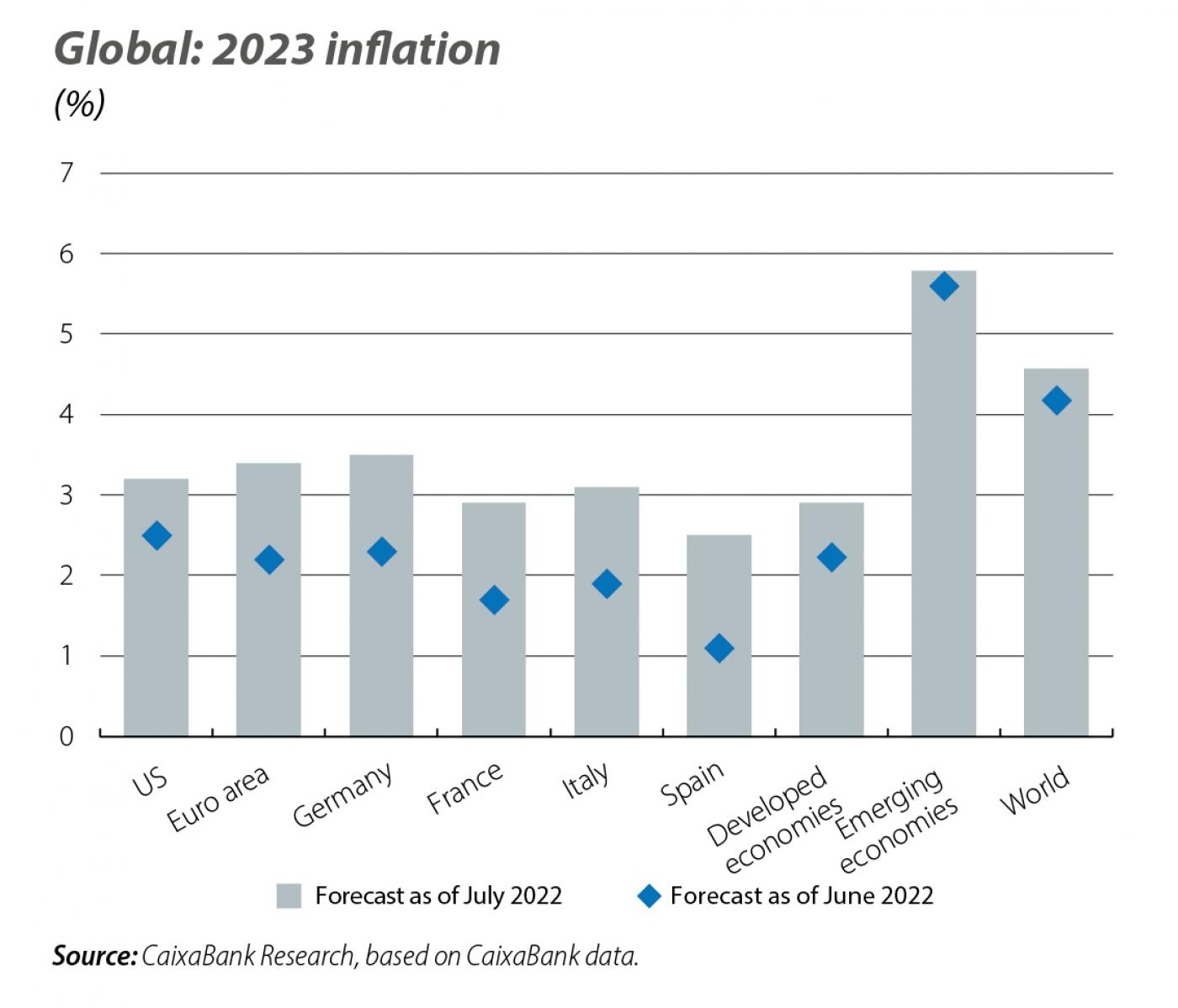 In fact, we revised up our forecasts for average headline inflation both in 2022 (+0.8 pps to 7.8%) and in 2023 (+0.7 pps to 3.2%), accompanied by a further upward revision in the case of interest rates. Moreover, the Fed has reiterated its commitment to controlling inflation, even if that raises the risk of recession – something which the financial markets are beginning to treat as highly likely. In this context, we are once again revising our growth forecasts downwards: –0.2 pps, to 2.2% in 2022, and –0.8 pps, to 1.1% in 2023. In the quarterly profile we anticipate a sharp cooling of economic activity this winter. 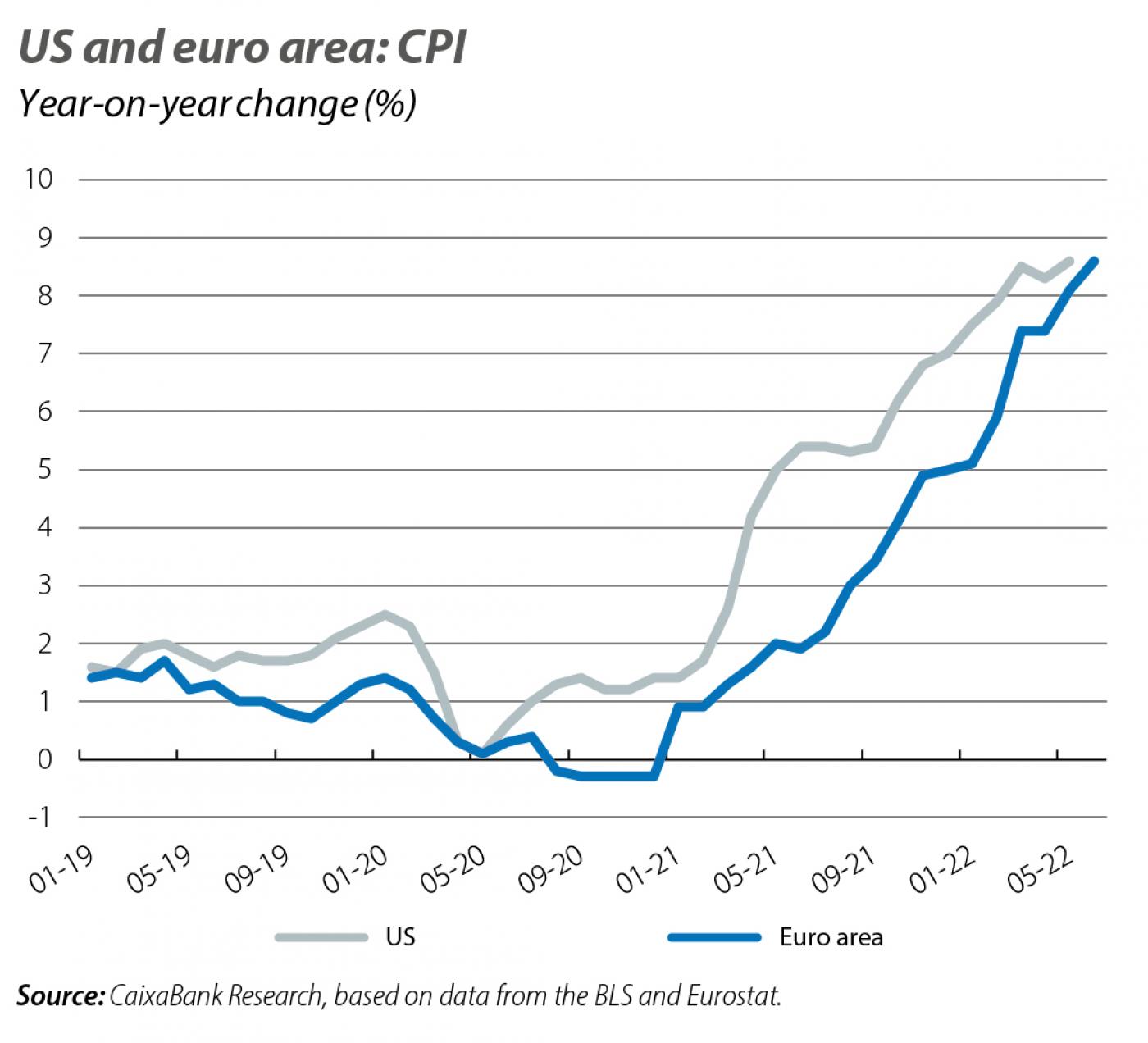 The euro area faces major challenges in the coming months

The main confidence indicators in June remain around the low levels which they fell to in March following the invasion of Ukraine. In addition, in June some opinion polls have started to indicate a slowdown in the services sector, which up until now had enjoyed a good outlook thanks to the lifting of COVID-related restrictions and the possibility of the first «normal» summer since the outbreak of the pandemic. In this regard, the increase in the price of services is also a worrying development, as it indicates that inflation is filtering from goods through to the rest of the consumer price index basket: in June, headline inflation reached 8.6% and core inflation, 3.7%. As a result, we are once again revising our forecast for headline inflation upwards: by 0.7 pps, to 7.5% for the 2022 average, and by 1.2 pps, to 3.4% for 2023.

This cocktail of high inflation and higher interest rates explains the 1.3-pp downward revision of our growth projection for the euro area in 2023, bringing the figure to 1.7%, following the 2.9% forecast for this year. For the time being, we expect that the euro area will be able to avoid a recession thanks to the buoyancy of the labour market, the savings accumulated during the pandemic and the national fiscal measures implemented to offset the rise in inflation, although we expect it to virtually stagnate in Q4 2022 and Q1 2023. However, the risks are clearly concentrated on the downside, especially when we consider the far from negligible possibility of Russia cutting off gas supplies to the region. 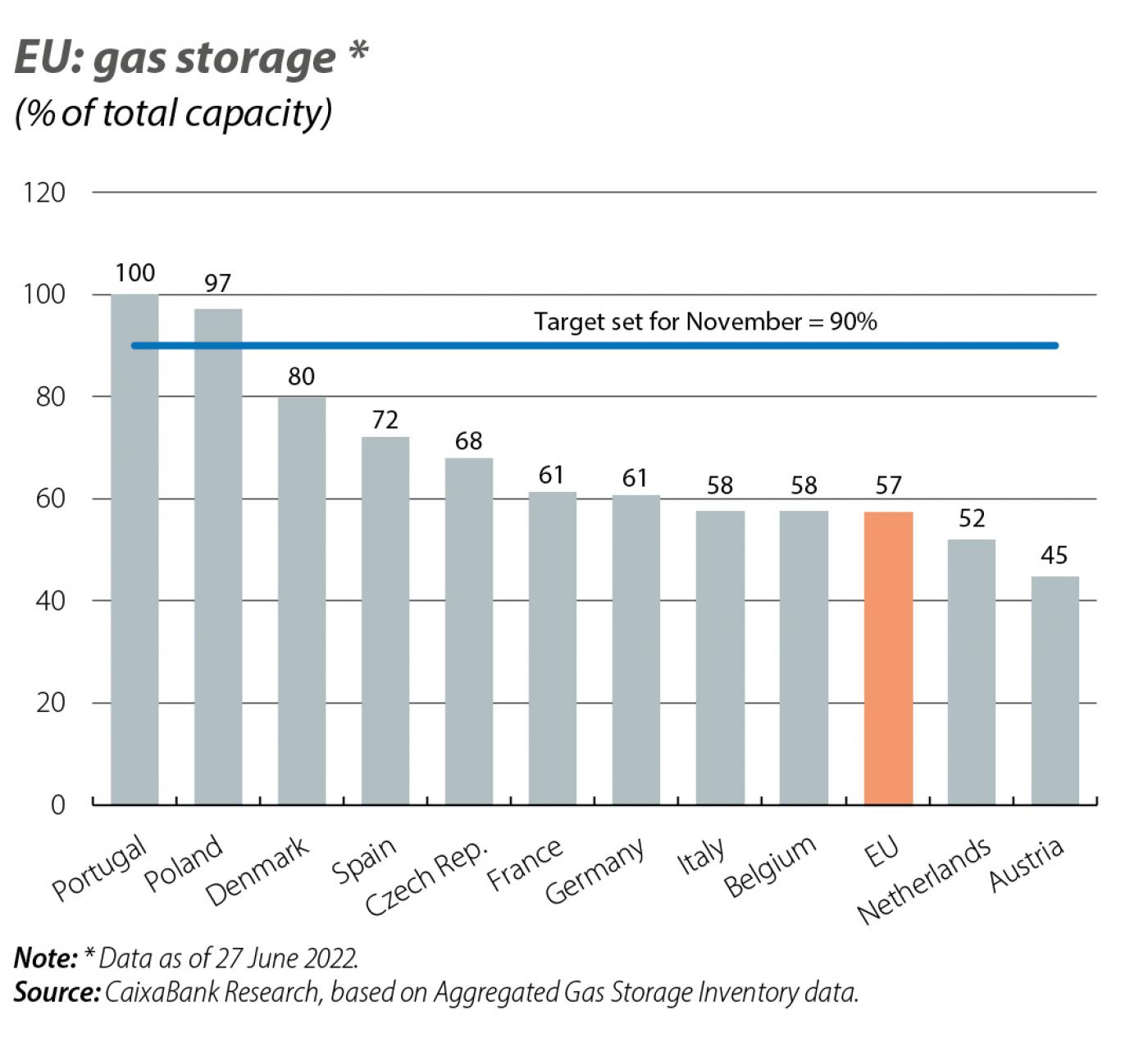 EU countries are accelerating the process of accumulating their gas inventories

EU countries are accelerating the process of accumulating their gas inventories in an effort to meet the target of reaching 90% of the maximum storage capacity by November (below 60% at the beginning of July). Germany is among the countries most at risk, as Russian gas accounts for over 60% of its total consumption. This is why the German government has already activated the second of three levels under its national energy emergency plan and is urging the population to reduce its energy consumption. 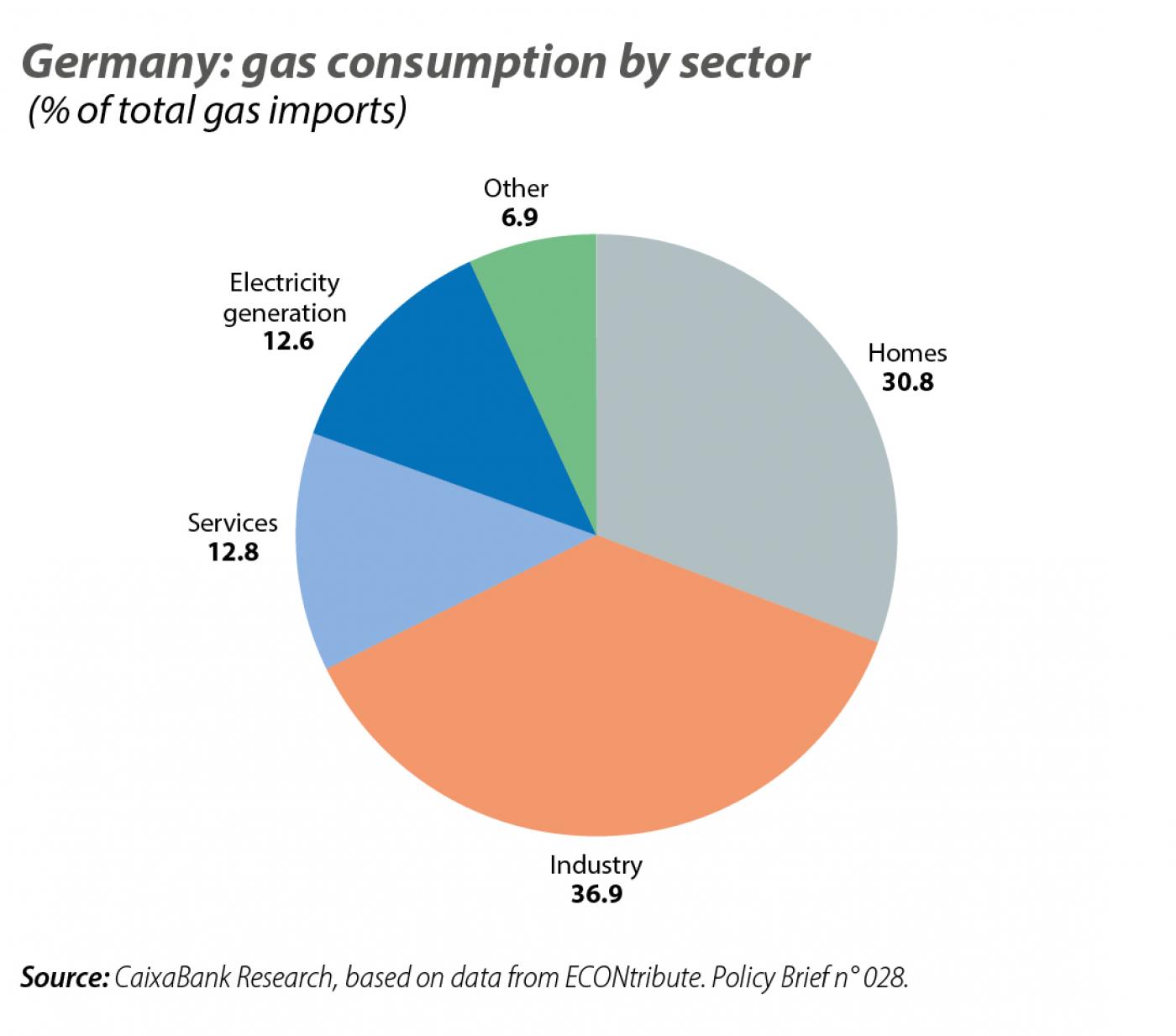 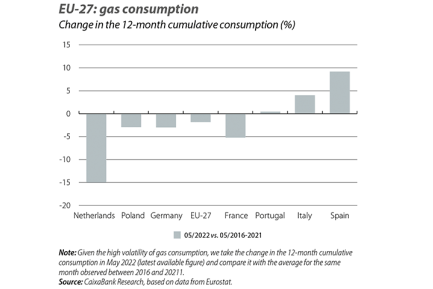 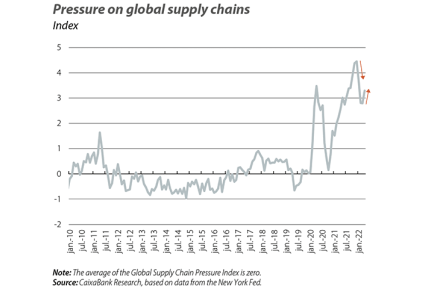 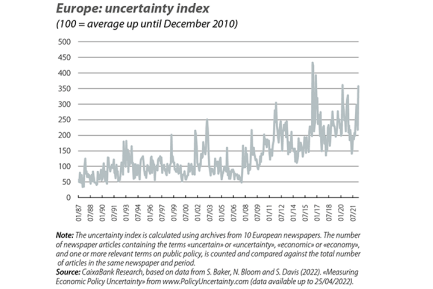