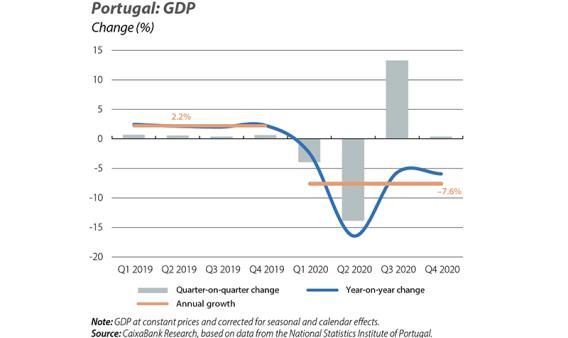 This is a contraction on an historical scale and greater even than those registered in the Great Recession (–3.1% in 2009) or the sovereign debt crisis (–4.1% in 2012). Nevertheless, the economy has demonstrated remarkable resilience. Specifically, in Q4, GDP managed to grow by 0.4% quarter-on-quarter despite the mobility restrictions, thus moderating the loss compared to pre-pandemic levels to –5.9% year-on-year. These figures were better than initially suggested by the indicators and reflect the fact that the restrictions in Q4 2020 were more targeted than in Q2 2020. In addition, they suggest a certain adaptation among economic players to the situation provoked by the pandemic, as well as indicating that economic activity has the capacity to resume a stronger recovery when the lockdown eases and the pandemic is brought under control. For the time being, however, this recovery will be temporarily interrupted by the severe deterioration of the health situation that Portugal is suffering in the early stages of 2021 (in January the country suffered almost the same number of deaths due to COVID-19 as it did in the whole of 2020). 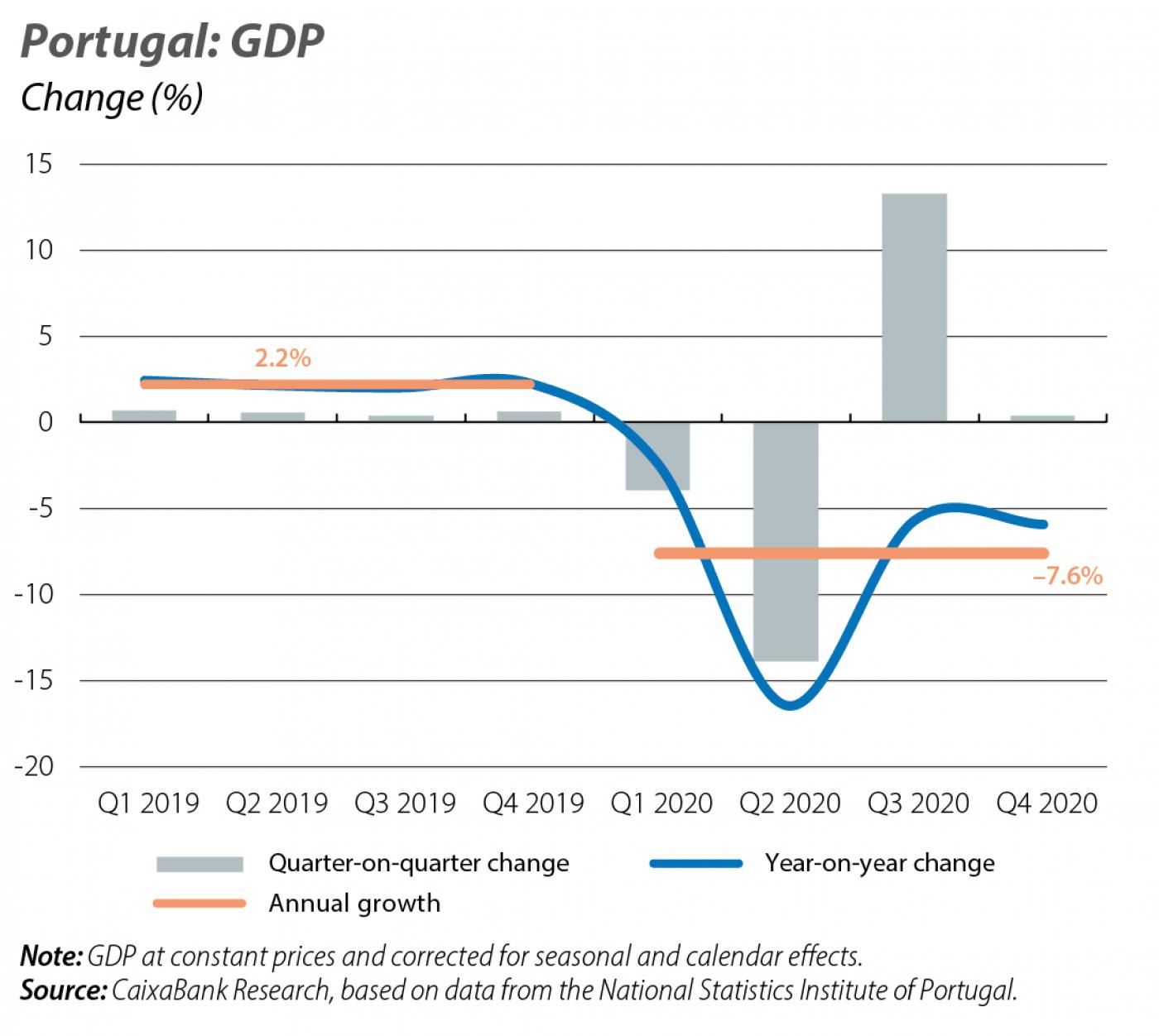 2021 begins overshadowed by the third wave of infections

The sharp increase in infections and the strain on the health system have forced the authorities to impose a more severe lockdown. Indeed, this situation will affect the whole of Q1 2021, thus interrupting the recovery initiated last summer, as suggested by the Bank of Portugal’s daily economic activity indicator which declined steadily throughout January. Nevertheless, the medium-term prospects for recovery remain positive. On the one hand, the vaccinations are helping to recover some of the lost ground and will be essential in boosting mobility, tourism and activity in general. In addition, companies have shown an ability to adapt to e-commerce and teleworking, while the government has streamlined and bolstered support measures to households and businesses (the simplified furlough scheme has been reactivated to mitigate income losses, and the government-secured credit lines have been bolstered). Portugal will also receive a boost from the European funds (NGEU and bolstered multi-year funds), as well as benefiting from the ECB’s accommodative monetary policy. 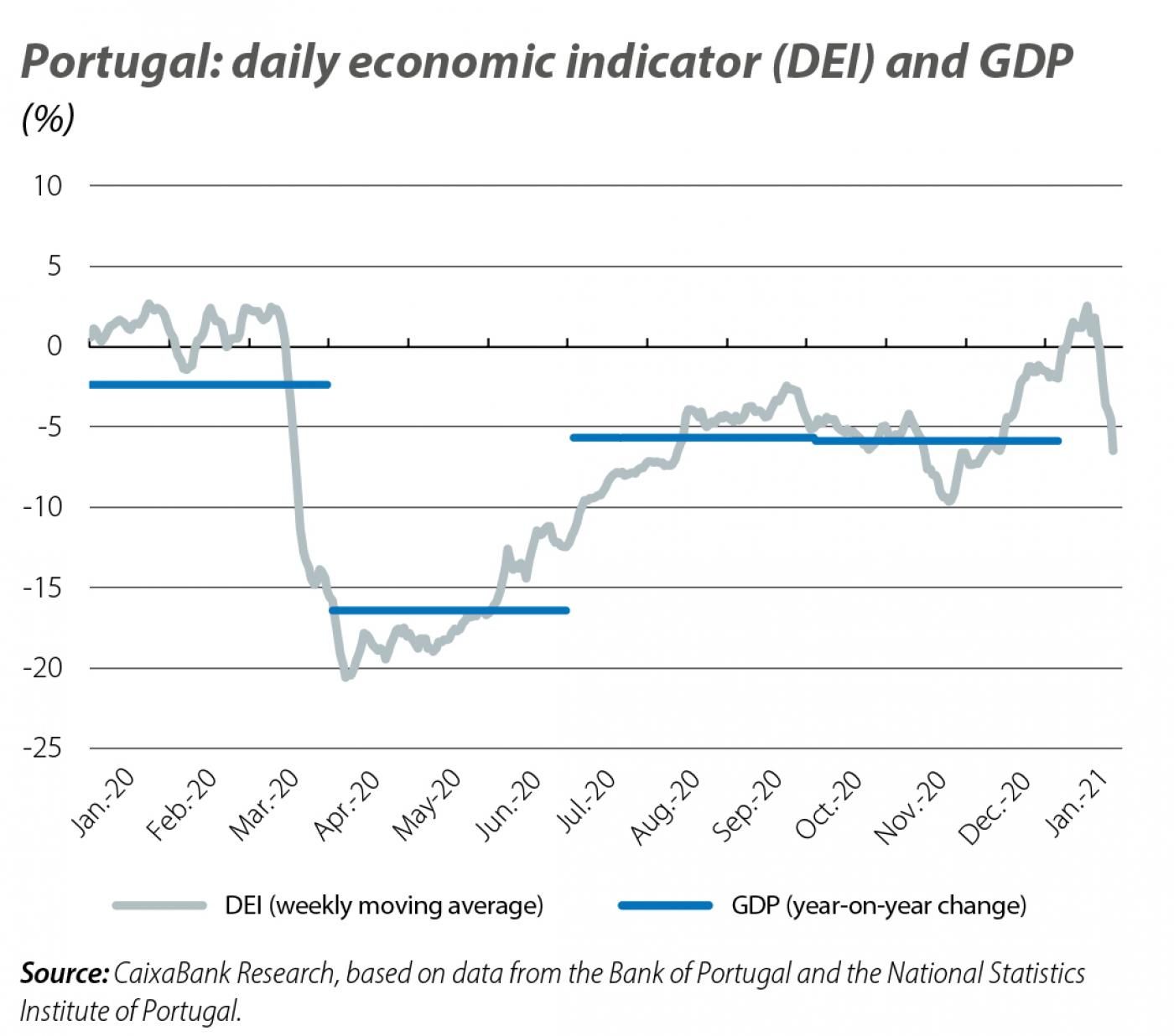 The labour market has held up better than in the past

The unemployment rate fell for the fourth consecutive month in December, reaching 6.5%, even lower than in December 2019 (6.7%). However, the employed population declined by 0.2% month-on-month, bringing it to 4,793,400 people and widening the gap compared to pre-pandemic levels by –45,200 jobs. Overall, these figures indicate that the pandemic has had a somewhat more benign impact on the labour market than that witnessed in previous crises, thus highlighting the important protective role played by support policies such as the furlough schemes. In fact, with the deterioration of the pandemic the government has extended its support for the labour market, and the simplified furlough scheme (available to companies forced to close during the current state of emergency) now covers 86,300 people. However, the environment remains highly demanding and, when the protection for employment begins to be withdrawn, the unemployment rate is likely to rise.

The pandemic drove up the budget deficit, although it ended the year better than expected

Specifically, the public deficit (cash criterion) will have stood at –5.2% of GDP (–10,320 million euros). While this is a significant increase over 2019 (–0.3%), it is clearly lower than the government’s forecasts (–7.1% of GDP). This behaviour is explained by a better than expected execution of revenues (+1,068 million euros compared to the sum estimated in the state budgets), together with a lower execution of expenditure (–2,600 million euros, also compared to the budget). For 2020 as a whole, the measures introduced to support firms and households, together with COVID-19-related expenditures, exceeded 4,500 million euros, or around 2.3% of GDP. This budget execution suggests that when the public deficit figures are published on an accruals basis, they will place it at 6.3% of GDP (1 point lower than anticipated in the 2021 state budget), as the government itself has indicated. Public debt, meanwhile, will have reached 133.7% of GDP (+16.5 pps compared to 2019). The cumulative 12-month current account balance remained at –1.1% of GDP in November. On the one hand, the balance of goods improved (–5.8% of GDP), with exports falling (–8.8% year- on-year) more moderately than imports (–13.6%). On the other hand, however, the surplus in the balance of services fell to 4.3% of GDP (–3.9 pps year-on-year), dragged down by a greater collapse in tourism exports (–52.2% year-on-year) than in tourism imports (–38.4%). Exports are expected to recover in 2021, especially in the case of sales of capital and industrial goods, although overall they are expected to remain some 10% below 2019 levels.

In December, the number of guests in tourist accommodation fell by 70.7% year-on-year to 462,500 (in November the decline had been 76.8%). The number of overnight stays decreased by 72.3%, due to a drop among both residents and non-residents. Thus, the pandemic brought tourism numbers in 2020 to historic lows: in total, there were 10.5 million guests and 26 million overnight stays, corresponding to annual declines of 61.2% and 63%, respectively. The shock for the year as a whole was particularly marked in the case of overnight stays by non-residents (–74.9%, compared to –35.3% for residents). The real estate market shows the first signs of cooling

According to data from Confidencial Imobiliário, home prices continued to decelerate and rose by 4.8% year-on-year in December, the lowest growth rate since August 2016. That said, prices still ended 2020 1.8% above their pre-pandemic levels. However, it should be noted that in Q4 2020 home prices in Lisbon fell by 0.8% (the first decline since June 2015). With these dynamics, and the prospect of a possible delay in the revival of tourism, home prices are likely to show more signs of correction in 2021 (remember that the real estate market tends to react late to the real impacts of the economy).