Uncertainty predominates in the financial markets

Markets round out a volatile semester. The financial environment has undergone a change of scenario in the first six months of 2018 and has left behind the period of very low volatility seen in recent years. Throughout the first half of the year, stock markets have suffered various episodes of losses, interest rates have risen, risk premiums on sovereign and corporate debt have proven unstable and the dollar has gained strength against the major currencies of both the advanced and emerging economies. This change in the financial landscape has been driven, in part, by the less accommodative tone of the central banks in the advanced economies, reflecting a positive macroeconomic environment. In addition, the semester has brought with it an increase in risk aversion due to fears of a protectionist shift at a global level and increased geopolitical tensions. Both of these elements reared their heads in the financial headlines in June. Among the central banks, the US Fed announced a further hike in rates, while the ECB announced that it would end net asset purchases in December 2018. Although these decisions came as no surprise to investors, a new rise in trade tensions between the US and China (as well as other trading partners, such as the EU), together with a certain prevalence of political uncertainty in Italy, once again caused somewhat erratic market behaviour at the end of June.

The Fed reinforces the tightening of US monetary policy. At its meeting in June, the Fed increased its target interest rate by 25 bps for the second time this year, placing it in the range of 1.75%-2.00%. This decision was taken on the basis of the Fed’s very positive outlook for the macroeconomic environment, according to which its members expect US economic activity to continue to grow above its potential and the labour market to remain at full employment for the next few years. In taking this decision, the Fed reiterated the need to continue to gradually tighten financial conditions with further rate increases over the coming quarters. More specifically, the members of the Fed expect to carry out between four and five new rate increases up until the end of 2019. This outlook is consistent with the scenario foreseen by CaixaBank Research, albeit slightly more aggressive than that indicated by financial valuations. Although there were no large movements in the markets in response to these announcements, US sovereign interest rates were volatile over the month as a whole, surging by almost 15 bps in the first 15 days of the month, only for this increase to be undone due to the rise in trade tensions between the US and China.

The ECB announced the end of QE at its June meeting, noting that it will keep net purchases at a rate of 30 billion euros per month until September, before reducing them to 15 billion per month starting in October and finally bringing them to an end in December 2018. The ECB based its decision on the strength of the economic outlook and on the euro area consolidating its position in the expansionary phase of the cycle. However, it also recalled that there prevails a significant degree of economic slack and that inflationary pressures remain contained, thereby implying a need to preserve an accommodative financial environment. Thus, the ECB announced that interest rates will remain unchanged until at least after the summer of 2019. It also reiterated that it will remain active in financial markets by reinvesting the principal of the assets currently held on its balance sheet as they reach their maturity dates. In the wake of these announcements, European sovereign yields fell, in a clear sign that investors had paid more attention to the future path of the reference rates than to the end of net asset purchases. Peripheral sovereign spreads, meanwhile, continued to decline following the episode of risk aversion surrounding Italy, although they still ended the month at relatively high levels.

International stock markets display erratic behaviour. The main international trading floors began the month of June with a constructive tone, recording gains of over 3% in advanced economies. However, towards the middle of the month, stock markets took a downturn due to a renewed surge in tensions between the US and its trading partners. As such, emerging-market and euro areastock market indices suffered losses in the rest of the month and closed June down (Eurostoxx 50 –0.3%, DAX –2.4%, CAC –1.4% and MIB –0.7%), with the exception of Spain and Portugal (IBEX +1.7% and PSI +1.1%). US stock markets, meanwhile, managed to close the month with slight increases, at least for the most part (S&P 500 +0.5%, Dow Jones –0.6% and Nasdaq +1.0%).

The dollar remains strong. In June, the dollar continued its rise and made gains against the major international currencies. Among the advanced economies, the euro fluctuated around 1.16 dollars, while virtually all emerging-economy currencies depreciated. Losses were also recorded by the Argentine peso (–13.7%) and, to a lesser extent, the Turkish lira (–1.4%, having recovered some lost ground following the current president Recep Tayyip Erdoğan’s electoral victory), while the Mexican peso ended the month virtually flat on the eve of the elections of 1 July.

OPEC and its partners ease oil production cuts and, starting in July, will increase the current production ceiling of 32.5 million barrels a day (mb/d) by 1 mb/d. In any case, since several countries are already producing at full capacity, estimates indicate that the actual increase will be of around 700,000 barrels. As discussed in the Focus «What is behind the rise in oil prices?» in this same Monthly Report, the announcement came following a period of a few months in which oil prices had risen sharply, due to the production cuts exceeding those initially agreed and the strength of global demand, among other factors. In this context, the price of a barrel of Brent fluctuated around 75 dollars, without showing any signs of decline after the OPEC announcement, and ended the month with a new rally towards 78 dollars. 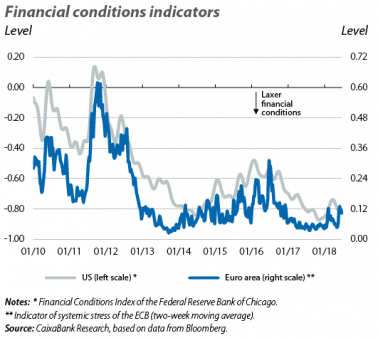 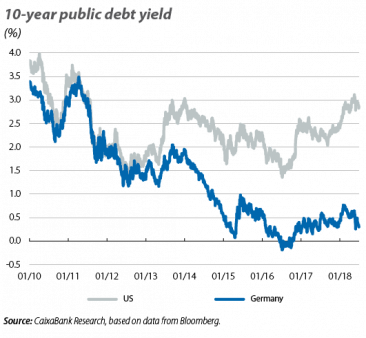 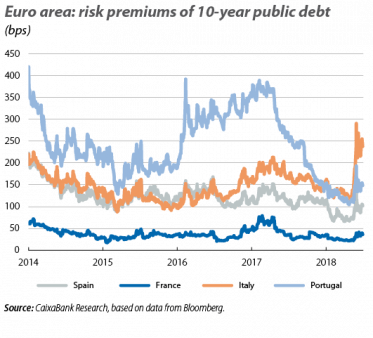