The excessive debt of Spanish firms: a matter of many or just a few?

The growth in indebtedness of non-financial firms during the 1990s and up to 2007 was a widespread phenomenon in most European countries and particularly intense in Spain. That is why it is usually claimed that our companies have too much debt and urgently need to deleverage.

We can use a range of indicators to measure the levels of debt. The most frequently used ratios are those of debt to assets (the percentage of the balance sheet financed by external funds); debt to gross operating profit (which measures the capacity to return debt with the earnings being made), and the financial burden on profit (percentage of earnings allocated to pay interest on debt taken out). High ratios indicate that companies are vulnerable, suggesting too much dependence on external funds or large proportions of the profits going to pay for debts.

As can be seen in the graph, the conclusions regarding the debt of Spanish firms vary depending on the indicator used. Their balance sheet structure does not appear to show signs of excessive debt in aggregate terms: the percentage financed with equity is in line with that of other countries in the euro area. On the other hand, indicators related to earnings or gross value added show a significantly high level of indebtedness compared with other euro area countries, indicating the need to increase profitability of the companies' assets. The deterioration in our economy has made this problem more acute, drying up earnings in a large number of sectors and raising debt ratios that take this variable as their reference.

The problem of these aggregate ratios is that they do not show whether a country's higher debt is due to a larger specialization in sectors that, given their characteristics, require higher debt or whether there is a widespread problem of excessive debt in all sectors. One illustrative example is the construction and real estate development sectors. In most of the countries analyzed, these are the sectors with the highest debt ratios, so their greater relative weight in our economy would partly explain our higher ratios. However, we can indeed talk of excessive debt when, in addition, this sector in Spain has a debt ratio that is 27 times its annual profit, compared with a ratio of 10 in the rest of the European countries. As we will see, this is not the only sector in Spain suffering from such an ailment.

A company's sustainable level of debt depends on many factors. Some are specific to the branch of activity it operates in. A sector whose production process requires a lot of intangible assets will have fewer tangible assets to act as a guarantee for a loan, compared with another sector that is more machinery-intensive, for example. Other factors are determined by characteristics of the firm itself, such as its management's ability to achieve greater profitability or to provide additional guarantees. In this respect, size is also important, as markets have little information on small firms: their contracts are not usually public and they don't issue listed securities, due to the relatively high costs this entails. Given this fact, small firms tend to rely more on self-financing or bank credit. In any case, their behaviour differs from that of large firms.

Therefore, in order to judge whether a company's level of debt is excessive, we need to take all these factors into account. One way of doing so is to compare the levels of indebtedness of Spanish firms with similar firms from other countries in the euro area that operate within the same branch of activity. In this way, by comparing firms from the same branch, we minimize those differences that might arise due to sector-specific features. If, moreover, we compare firms of the same size, those differences that might arise from having more or less access to markets are also reduced. The remaining differential should be attributable to differences in management ability or other specific circumstances. This kind of analysis has been carried out in a recent study(1) whose key findings we summarise here.

Firstly, the analysis shows how large and small firms do, in fact, behave very differently. Their debt ratios are highly disparate, although which type of company has a larger level of debt depends on the branch of activity.

The second of the findings comes from comparing the debt levels of Spanish firms with the average levels for the main countries in the euro area, within each branch of activity and company size. The graph below shows that, in 2010, large Spanish firms were on average more heavily indebted when compared with their European peers than small firms. In fact, large firms had debt ratios above the European average in 45% of the sectors; a figure that falls to 20% for small firms. In addition, for a high proportion of these overly indebted sectors, their relative debt has become more acute since 2007 (either because their leverage has increased or because their debt has fallen less than in other countries).(2)

Lastly, the analysis shows how the lower relative debt of small firms seems to result from their greater effort to reduce this debt since the end of 2007. In fact, the financial burden for small firms grew by around 15% between 2007 and 2009, while it only increased slightly for large firms. We could conclude that, given the lower interest rates during 2009, the greater financial burden for small firms reflects a larger drop in their earnings. Given this situation, these firms probably tried to reduce their reliance on external funds, concentrating on meeting their debt commitments that were consuming a large proportion of their earnings. Similarly, this fall in earnings would also increase the risk perceived by creditors that these firms would not be able to meet their debts. This makes it difficult to renew short-term credit and accentuates the deleveraging process, particularly within a context of less appetite for risk. In line with this situation, the data show how indebtedness has tended to fall further in those sectors whose over-indebtedness with respect the European average was larger in 2007.

In short, although the aggregate data show a proportion of external funds on the balance sheets of Spanish firms that is similar to other countries, a breakdown by sector reveals the need for adjustment in many of them. This adjustment has already started and has been particularly acute in small firms, although there are still numerous sectors with excessive debt. Moreover, it is vital to increase the productivity of our firms to bring our levels of financial burden and debt to earnings closer to those of the rest of Europe. Increasing profitability is a challenge that is as or even more important that reducing debt.

(2) It was only possible to carry out the analysis for 2010 with data from the aggregate balance sheet for each sector and company type. Consequently, the debt ratio calculated in this way could be affected by the values presented by the larger firms in each group (the larger small firms and the larger large firms). However, quartiles of the debt distribution ratios are available for 2009 and the conclusions for the representative company of each group remain the same. 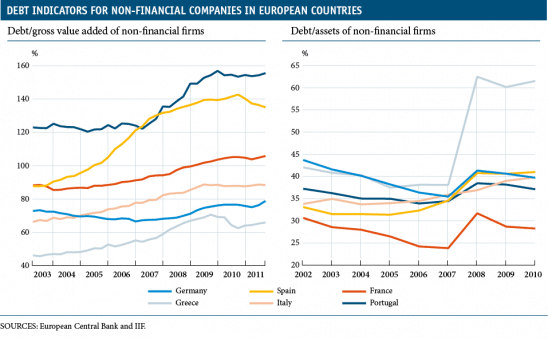 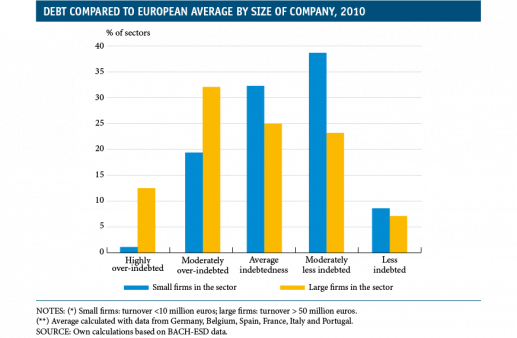