Gains in competitiveness to restart the external engine

Given the weak domestic demand foreseen for the coming years, all eyes are focused on how Spain's export industry is performing. Its dynamism will determine the economy's ability to recover. Undoubtedly, in an increasingly globalized market, gains in competitiveness will be a key factor in boosting exports. After years of marked deterioration, some progress has recently been seen in this respect. But there is a still a long way to go to improve competitiveness. So how far can these gains in competitiveness boost exports?

The most frequent competitiveness indicators are usually calculated based on the trends in prices or the cost of labour per unit of output. An increase in these variables above the figure reported for other economies damages a country's ability to export and helps foreign products enter its domestic market. As a consequence, its relevance in terms of international trade can decline in the long term.

This was the case of Spain's competitiveness from the time it joined the euro area. As can be seen in the left-hand graph below, both the price and cost-based indices coincide in pointing to a clear loss of competitiveness with regard to the rest of the countries in the European Monetary Union (EMU) between 1999 and 2008. However, some differences can be observed between them. In particular, the trend in relative unit labour costs (ULC) is clearly more volatile than that of the price indicators. With regard to the latter, the increase in the price of Spanish goods was 10% higher than the rise for European goods up to 2008. This differential fell to 5% in the case of the price of exported goods, so that the loss of competitiveness among non-tradable goods was greater than among tradable goods during the boom years.

That's why, given the importance of being able to reflect an economy's real competitiveness more accurately, some studies propose using disaggregate competitiveness measures that take into account the different composition of the goods being traded.(1) Other procedures also help to refine the calculation of competitiveness as they differentiate between the destinations of a country's exports and its rivals in these countries. This is the case of real effective exchange rates that weigh up relative prices, or costs, and exchange rates according to each country's presence in the main export destinations. The trend in these more complex measurements also reveals a loss of competitiveness during a large part of the last decade.

But, within this context, the relatively favourable trend in Spain's share of exports in world trade as a whole still comes as some surprise. Since Spain joined the European Monetary Union in 1999, its export presence in global trade has fallen by just 2 tenths of a percentage point, down to 1.7%. This contraction, close to 10%, was practically half the one recorded by the export share of the euro area as a whole which, in 2011, stood at 26.3% compared with 32.7% a decade ago. This better performance could be due to the existence of other factors, in addition to price-competitiveness, which also influence a country's export share, such as the quality of its exports, sector specialization or geographical destination.

This result, however, cannot hide the fact that Spain's sales abroad are performing below their potential. One clear example is the low relative weight of our goods exports in relation to GDP, specifically 20.6% in 2011. This figure is the lowest among the four main economies of the euro area, far from the 43.0% in Germany or the 34.0% for the monetary union as a whole.

Our exports therefore have plenty of room to grow. And improved competitiveness would undoubtedly help to achieve this. Actually, according to the main econometric models, after the trend in world trade, competitiveness is one of the main factors underpinning the performance of Spanish exports.(2) In fact, according to these estimates, a 1% increase in competitiveness compared with industrial countries, measured using the real effective exchange rate based on prices, represents a long-term rise in the level of real exports of between 0.6% and 1.3%. This means, for example, that if the competitiveness index returned to its level before Spain joined the euro area, real exports would increase by between 8.4% and 18.3% compared with the level of 2011. In this case, the relative weight of goods exports would rise to a range of between 22.3% and 24.4% of GDP, a level higher than France's and on a par with Italy's.

This scenario is based on a 16% improvement in competitiveness compared with 2008's level. But is such a large correction possible? Over the last 50 years, reductions in the competitiveness index of over 15% have been observed. On some occasions preceding the current decline, these decreases were the result of devaluations of the peseta, specifically in 1967, 1979 and 1992. However, these gains in competitiveness were transitory. In the medium term they were wiped out by the high inflation resulting from the currency's loss of value. This phenomenon can be clearly seen during the years after the devaluations of 1967 and 1982. After the devaluation of 1995, however, this effect is not observed. This would be due to inflation being controlled at comfortable levels as a result, largely, of greater fiscal discipline.

Today, the presence of an independent European monetary authority means that devaluations cannot be used as a means of quickly improving competitiveness. Reductions in the indicator are therefore slower than they used to be. The above graph confirms this. Between 2008 and January 2012, the correction in the effective exchange rate was 5%, far from the falls observed previously. However, the effect of this correction is likely to last longer as it is due to structural factors.

In short, there is a lot of room for improvement. However, structural reforms have to be undertaken in order to make progress in this direction. The latest reports by the European Commission and the International Monetary Fund place particular emphasis on this aspect. Among the measures they propose, of note are those that increase competition in the markets of goods and services, facilitate the reassignment of resources towards the sectors of tradable goods, boost innovation, help firms to grow and eliminate frictions in the labour market. Undoubtedly this is no easy task but its benefits, by consolidating the export industry as the driving force behind Spain's economy, could be great. 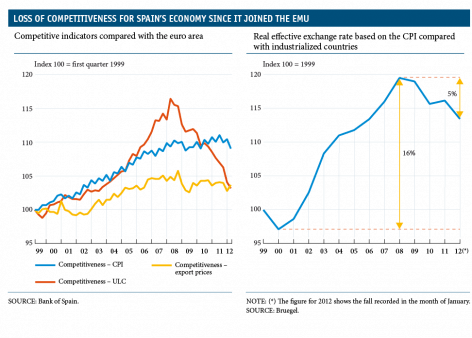 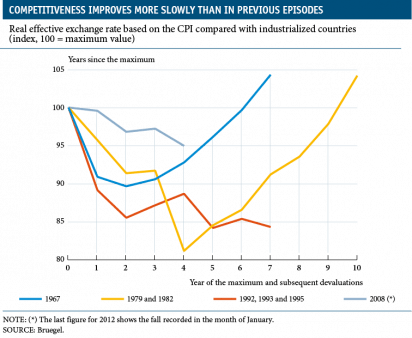