From Kyoto to Durban: what does the European Union want?

As from January 2012, the airlines that use European Union (EU) airports have to pay a tax according to the CO2 emissions they generate. At the beginning of February, the Chinese Civil Aviation Administration expressly prohibited Chinese airlines from paying the EU for their carbon emissions. A trade conflict has therefore emerged with the EU on one side and China, together with the United States, Japan, Russia and other countries on the other. Why is the EU demanding payment of a kind of environmental tax on air transportation even in the case of overseas flights, whose flight path is mostly outside EU air space?

The reason lies in the EU's decision to bring the aviation industry under the trading scheme for greenhouse gas emission allowances, set up in 2005. A scheme that sets the maximum amount of contaminating gases that can be emitted and shares this amount among the economic agents emitting them. This limited amount of emission allowances encourages emissions to be cut as, if agents exceed these levels, they must buy emission allowances from other agents. The desired outcome is a reduction in emissions. To date, only energy intensive industrial facilities came under this regime. The pollution caused by air companies is relatively small but growing fast, as is the industry itself. It is estimated that a passenger taking a return flight from London to New York produces the same emissions as an average EU citizen in heating their home for a whole year.

The case of civil aviation illustrates very clearly the EU's involvement in the issue of global warming and climate change. The EU has promoted actions by the United Nations in this area, from Kyoto to the recent Durban Conference in December 2011. Certainly, the world is facing two huge challenges in the area of energy. The first, meeting growing energy demands, particularly from developing countries. The second, to do so whilst also reducing greenhouse gas emissions.

The need to maintain the growth of developing countries is clear, in order to achieve goals such as reducing poverty and improving living conditions. But the issue of climate change could be more controversial. The scientific consensus states that, in the last 150 years, the average annual temperature has risen by 0.8 degrees Celsius, a little more in Europe, and this rise is tending to accelerate. Many experts believe that, in order to stop global warming from having irreversible consequences, the temperature should not go more than two degrees higher than the current levels within this century. As it is believed that the cause of climate change is the excessive emission of greenhouse gases due to human activity, the solution lies in limiting the emissions of these gases. The international body responsible for evaluating climate change data and its consequences is the Intergovernmental Panel on Climate Change (IPCC). Reports drawn up by the IPCC form the basis of the United Nations Framework Convention on Climate Change (UNFCCC), created in 1992, whose aim is to slow up global warming. Specifically, it is attempting to stop the annual global temperature from rising more than two degrees Celsius above pre-industrial levels. To this end, if believes that the concentrations of greenhouse gases (principally CO2) should be stabilized, requiring a 50% reduction in the emissions of these gases by 2050.

The Kyoto Protocol, which came into force in 2005, was an important first step but it only committed developed countries and, moreover, was not signed by the United States. This means that it only covers 30% of the world's total emissions. In any case, the 15 Member states of the EU that signed the Kyoto Protocol reduced their emissions by 10.7% in 2010 compared with the reference year of 1990, exceeding the target reduction of 8%. Other states that joined the EU afterwards also adopted targets to reduce their emissions and have achieved similar results.

The Kyoto agreement provided commitments until 2012 so that, in 2007, in Bali, negotiations started for a new agreement as from 2012. But these were unable to be completed in Copenhagen in December 2009, while one year later, in Cancun (Mexico), the only progress made was recognizing the need to limit global warming to the levels established by the UNFCCC.

The EU has promoted a second Kyoto agreement for the period 2013 to 2020, which perfects and furthers the commitments of the first. But Japan, Russia and Canada already made it quite clear that they weren't going to take part; neither would the United States or China. This second period of commitments would therefore only affect 16% of the world's emissions; not even a heroic effort by the EU (11% of emissions) in limiting emissions would result in any progress being made in the aim to slow up the world's climate change. For this reason, the EU's aim at the meeting in Durban (South Africa) was to achieve agreement on «a route map and deadline to achieve an ambitious, global, legally binding framework for climate action by all large economies», according to Barroso, President of the European Commission. After two weeks of negotiations, the outcome of the conference of the
195 states in Durban was somewhat ambiguous. The Kyoto developed countries agreed to extend the life of
the protocol to continue reducing carbon emissions. For the rest, the EU did not achieve the binding commitment it wanted but a somewhat legally ambiguous agreement according to which an effort will be made to stop temperatures from rising higher than two degrees by means of a legal framework that will be ready in 2015 and come into force in 2020. Moreover, it was agreed to create a financial instrument (the Green Climate Fund) to help developing countries to combat the effects of climate change (100 billion dollars a year).

It is therefore clear that the EU's battle against climate change goes much further than these international commitments. In fact, in 2007, the European Council adopted some ambitious energy and climate change targets for 2020: a 20% cut in greenhouse gas emissions (compared with the reference year of 1990), or even a 30% cut if other countries join the effort to reduce emissions; to increase the renewable energy share to 20%; and to improve energy efficiency by 20%. A commitment was even established to reduce the emissions of the EU and other industrialized countries by 80% or 95% by 2050.

But energy policy is not limited to restricting carbon emissions. The EU Treaty has established the basic principles: to guarantee the energy market functions efficiently (secure energy supply and competition) and to conserve and improve the environment. Some progress has been made along the road towards an integrated market but adaptation is slow and the challenges are still growing. The domestic energy market is still highly fragmented by national borders, with state-wide companies and a multitude of rules and practices that are also national, as well as many barriers to competition. The security of energy supply is also a cause for concern, for example due to this fragmentation of the European market, the limited life of existing nuclear power stations and the gas supply crises already suffered. The European Commission has called for changes in the scope of production, supply and use of energy but the work required in this area is essentially titanic. Almost as titanic as achieving the climate change targets.

This box was prepared by Joan Elias 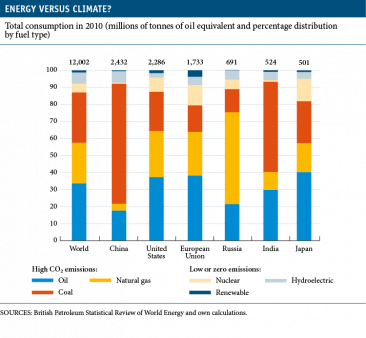