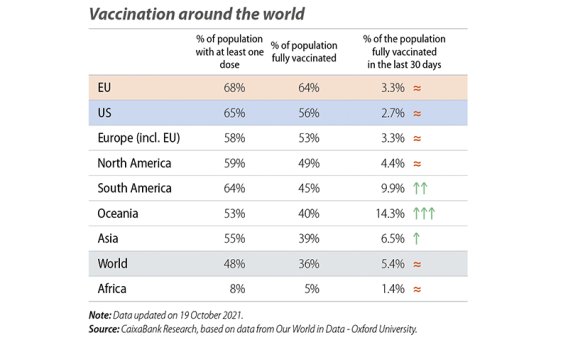 As we approach the end of 2021, it is becoming increasingly clear that, although the recovery is progressing, it is becoming more unequal from country to country. This is not big news in itself: when the pandemic irrupted in 2020 and as the various waves came and went, even though it was a global shock its intensity varied from place to place. These discrepancies depended on the characteristics of the local economy and its sectoral composition; on the strictness of the lockdown strategy first, and then on the vaccination strategy; and finally on the extent of the fiscal stimulus adopted. Just as the shock was global but the impact local, something similar is occurring with the return to normality. Now the key factors that have defined 2021 to date have been the delta variant, which has spread in a wide range of vaccination contexts, and the disruption to global supply chains. How are these two factors determining the latest macroeconomic trends? The IMF, in its latest forecasts, offers a scenario that summarises it perfectly. 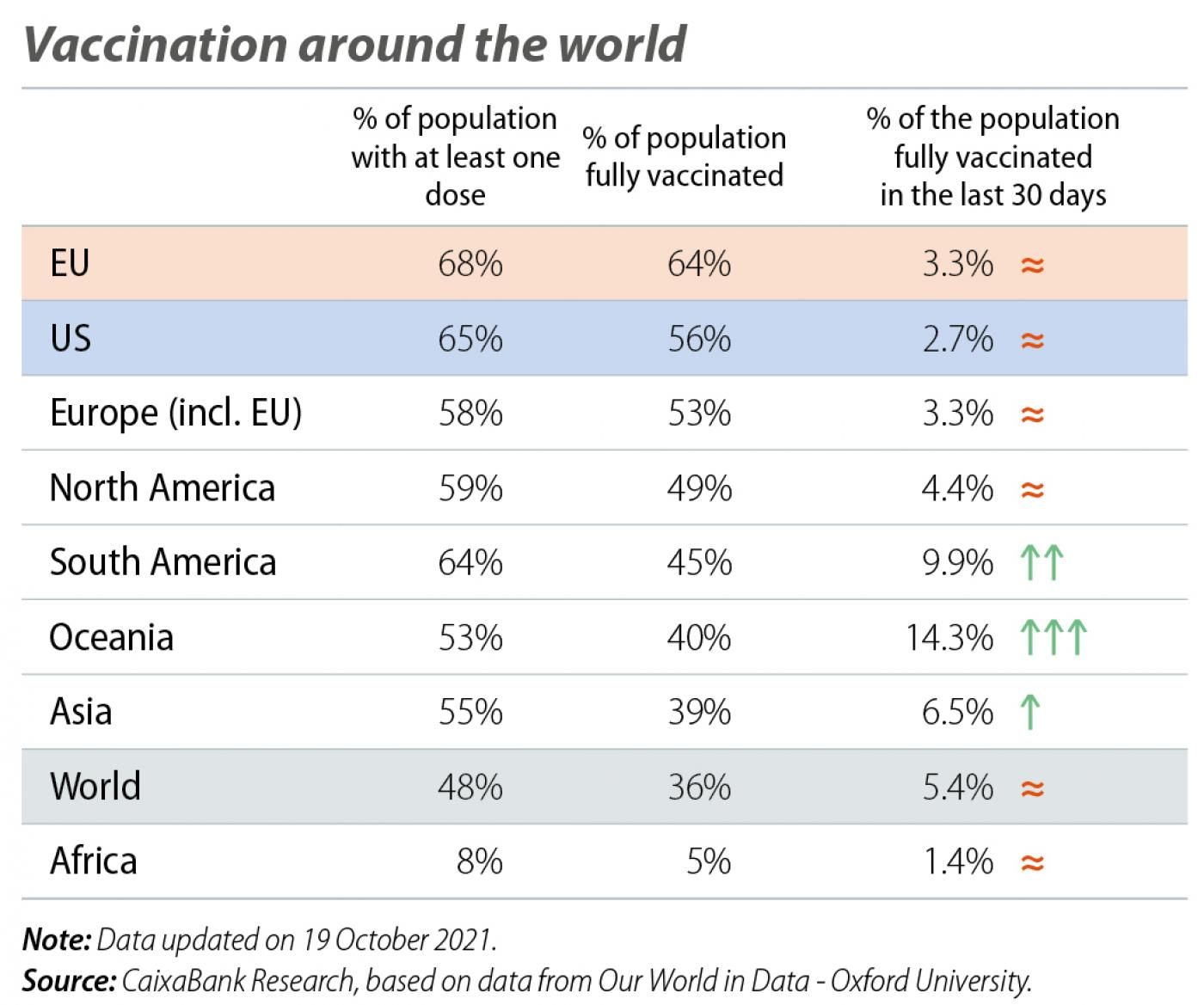 As a result of these two factors, the Fund has revised global growth for this year down by 0.1 percentage point to 5.9%, mainly due to the deterioration of expectations in advanced economies, as well as in certain emerging ones. For 2022, the IMF keeps its global growth forecast unchanged, albeit altering its composition to some extent, with an upward revision in some advanced economies and a downward correction in some emerging ones. All of this reaffirms the asymmetric nature of the recovery, which will continue to be led by China and major advances economies such as the US and the euro area. Finally, with regard to the balance of risks, the institution emphasises that in the short term these are concentrated in the dynamics of the pandemic, as has been the case for a year and a half now, and particularly in the risk of new variants emerging before a high level of vaccination is reached. In addition, as a relatively more recent threat, risks also lie in the developments in inflation. On this matter, the IMF interprets the spike in inflation as being the result of a combination of the mismatch between supply and demand related to the pandemic, on the one hand, and rising commodity prices on the other. 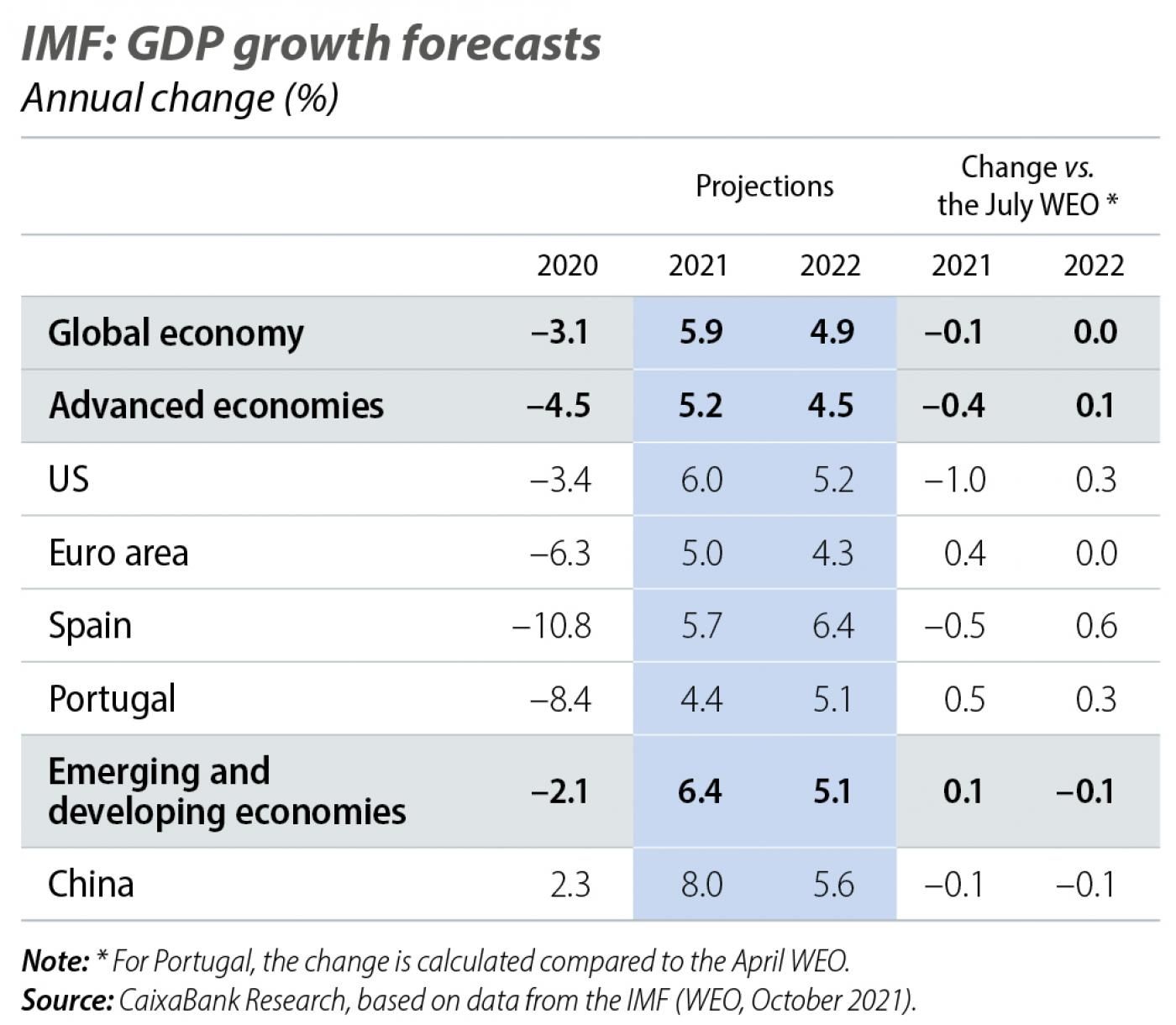 The prevailing interpretation among economists is that this imbalance between supply and demand and the commodity price pressures are temporary. That said, even if this is the case, it must be acknowledged that their temporary nature is being increasingly questioned as the months pass. In any case, winter is coming, as was said in a famous television series, and with it increasing pressure on certain components of consumption (the season begins with Bachelor’s Day in China and Black Friday in the West, and continues with Christmas and the sales) as well as on energy expenditure, which will experience its annual seasonal upturn. In this context, the imbalance between supply and demand is unlikely to be alleviated. Besides continuing to impact prices, this will reinforce the asymmetric nature of the expansion, as the imbalance is more palpable in certain countries than in others. 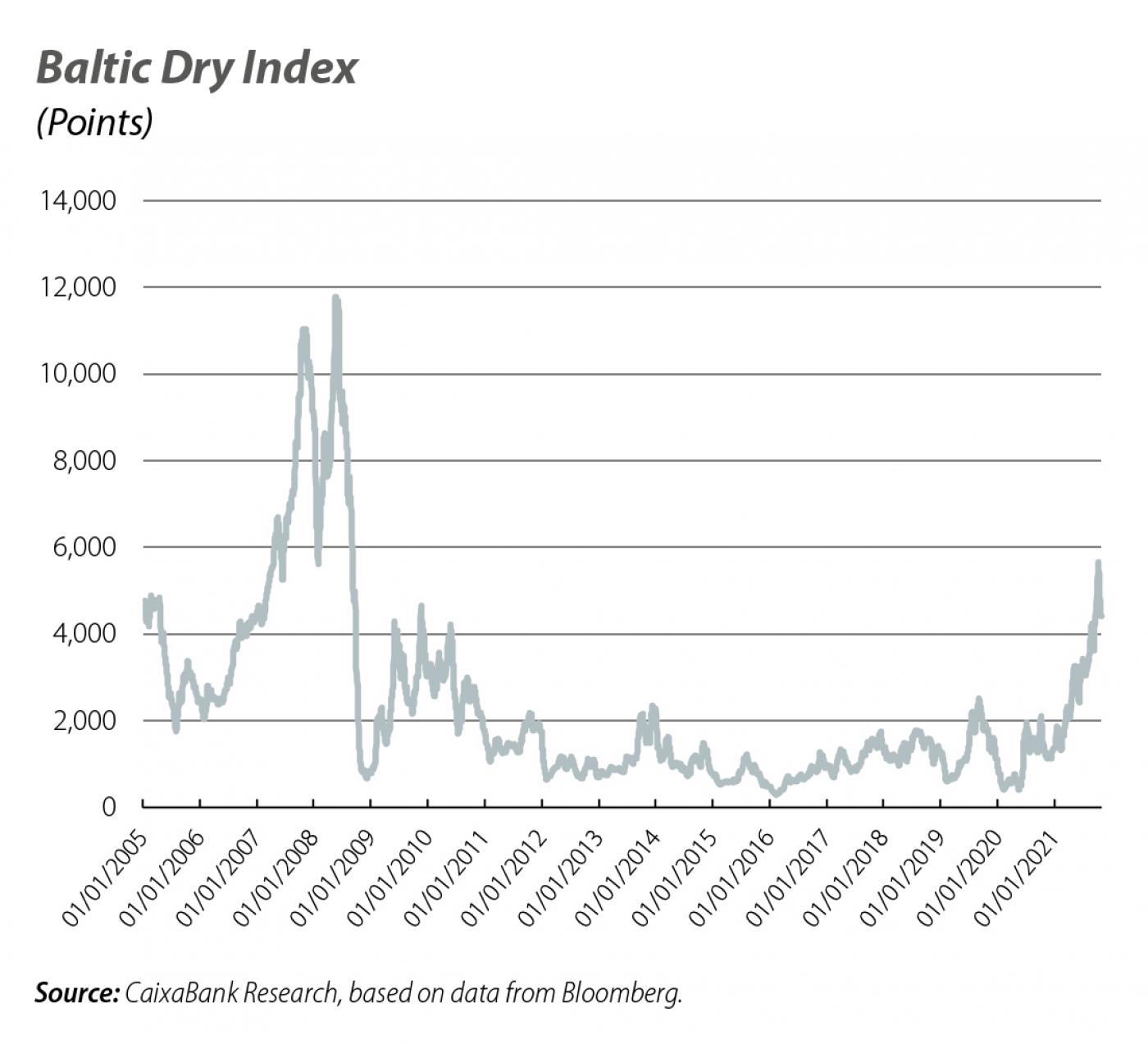 One of the countries that exemplifies the asymmetry of the recovery is the US. It was the first of the large advanced economies to reach pre-pandemic GDP levels, as early as Q2 2021. Now, however, US indicators point towards a moderation of economic activity. In particular, US GDP growth slowed in Q3 2021, affected by the delta variant and the persistence of bottlenecks. Growth stood at 0.5% quarter-on-quarter (4.9% year-on-year), the lowest rate since the start of the pandemic. As for Q4, the first indicators are still at levels compatible with significant activity growth, albeit below the rates reached during the first half of the year (1.6% quarter-on-quarter on average) (see the Nota Breve). We have therefore revised down our forecasts for both 2021 (now at 5.4%, −0.6 percentage points) and 2022 (now at 3.5%, −0.6 percentage points). These are still considerable rates, but somewhat lower than those anticipated a few months ago. 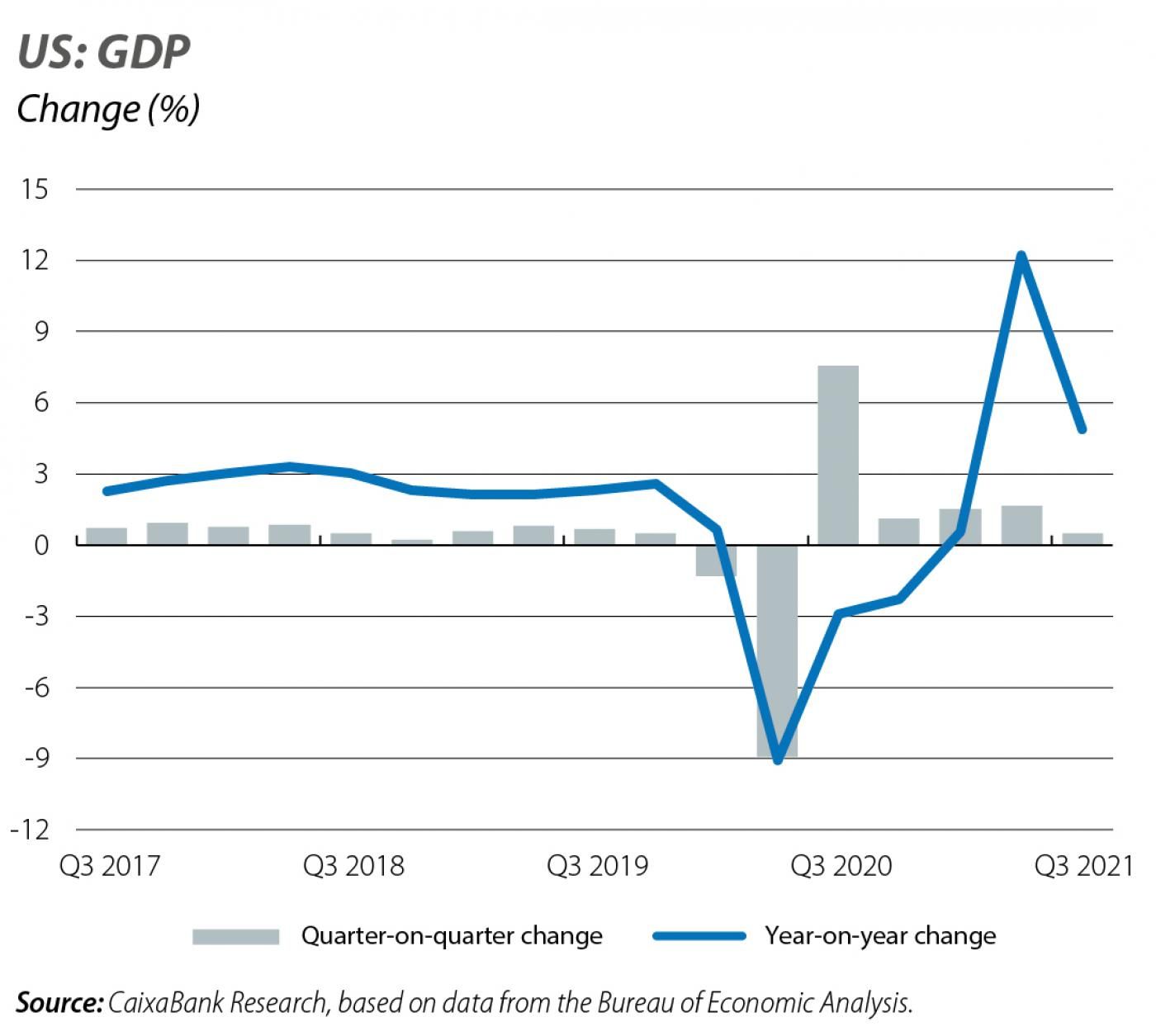 Firstly, in a country which has a high level of vaccination, but which is still far from achieving herd immunity and where a portion of the population appears reluctant to get vaccinated, the spread of new variants of the virus poses a major risk to economic activity. Secondly, the spike in inflation in recent months has been much more pronounced than expected (headline inflation stood at 5.4% in September, while core inflation was 4.0%). While we still believe that some of the price increases will be temporary, the pressures that are beginning to be felt on wages and the persistence of supply delays will be transferred to some extent to consumer prices. This substantially increases the likelihood of a scenario arising in which US inflation remains high for longer than previously anticipated. Finally, a third source of risk, albeit within a more limited time frame, is that related to the budget. This remains open as a source of uncertainty, but with a temporary lull. As is well known, the Treasury cannot borrow beyond the limit marked by the debt ceiling. This was previously suspended, before being restored on 1 August (at 28.4 trillion dollars), giving the Treasury a certain margin to cover its payment obligations with extraordinary measures. However, by October this limit had already been reached. Temporarily, Congress has slightly raised the debt ceiling (to 28.9 trillion dollars), offering respite until December and alleviating the short-term risk. 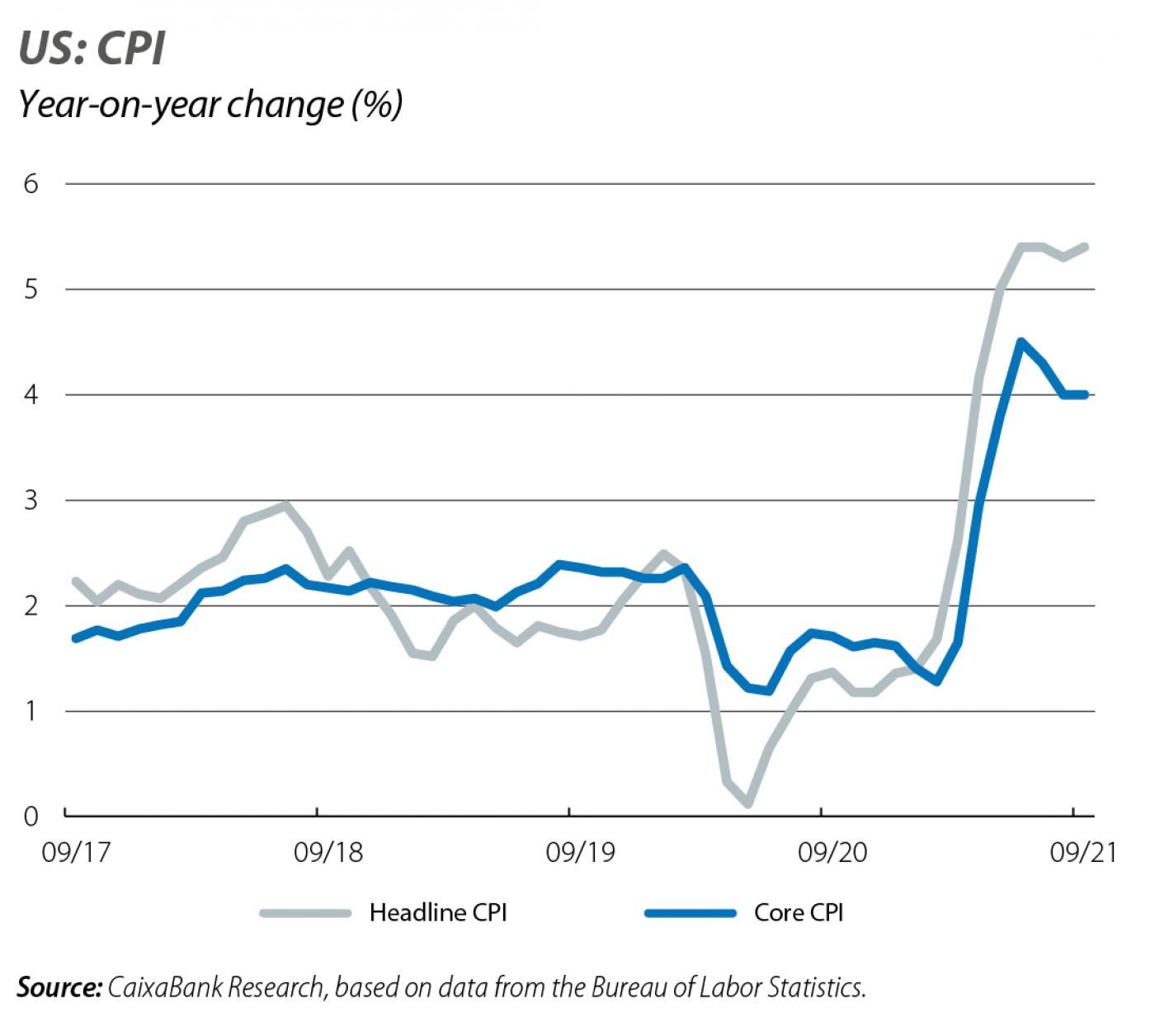 In the euro area, the imbalance between supply and demand is generating very different local effects

Europe
is one of the regions where the asymmetric effects of this mismatch are most prevalent, as the growth data for Q3 have shown, although the asymmetry is only incipient for now. However, what will happen in the final part of the year is the biggest source of concern. The cases of Germany and France exemplify this asymmetry. The German economy, heavily leveraged with world trade and deeply integrated into global flows of intermediate and final goods, could go from growing by 1.8% quarter-on-quarter in Q3 to just 0.5% in Q4. In contrast, France, which is more domestically oriented, will go from growing by 3.0% to around 1% at the end of the year, thus exceeding Germany’s growth rate in both cases. The euro area as a whole more closely resembles the case of Germany than that of France, with growth sliding from 2.2% in Q3 to 0.8% in Q4 (see the Nota Breve). 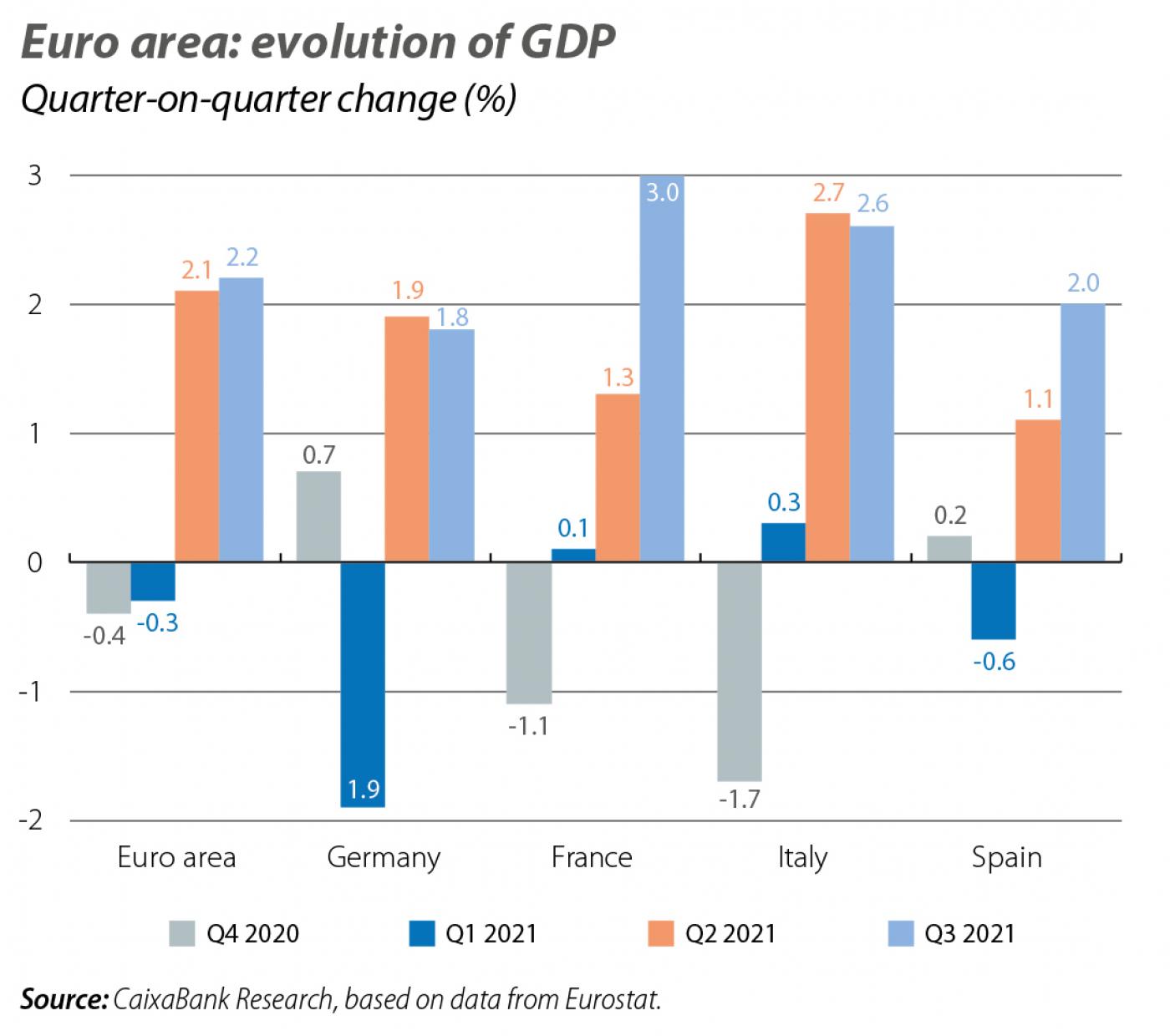 Inflation spikes, but the risk is an escalation of tensions

As a result of this decoupling between supply and demand and the tensions in commodities, especially energy, inflation stood at 4.1% in October (3.4% in September) and a further jump in the closing stages of 2021 is likely. Looking ahead to the future, the trend in natural gas prices is a particular source of concern, as the context of increasing seasonal demand is compounded by a low level of stocks. In any case, this is an episode which should begin to fade when the winter draws to an end. 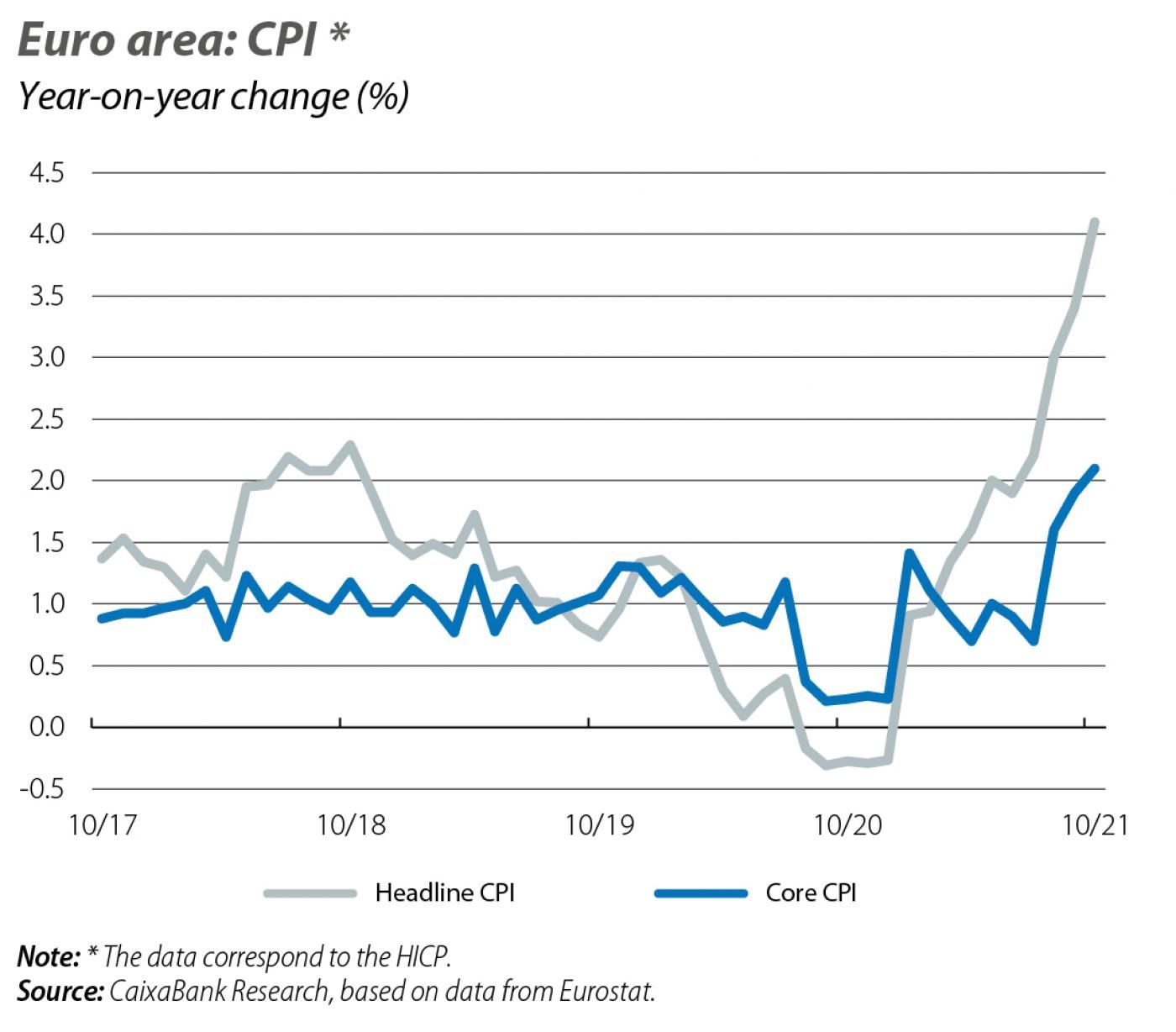 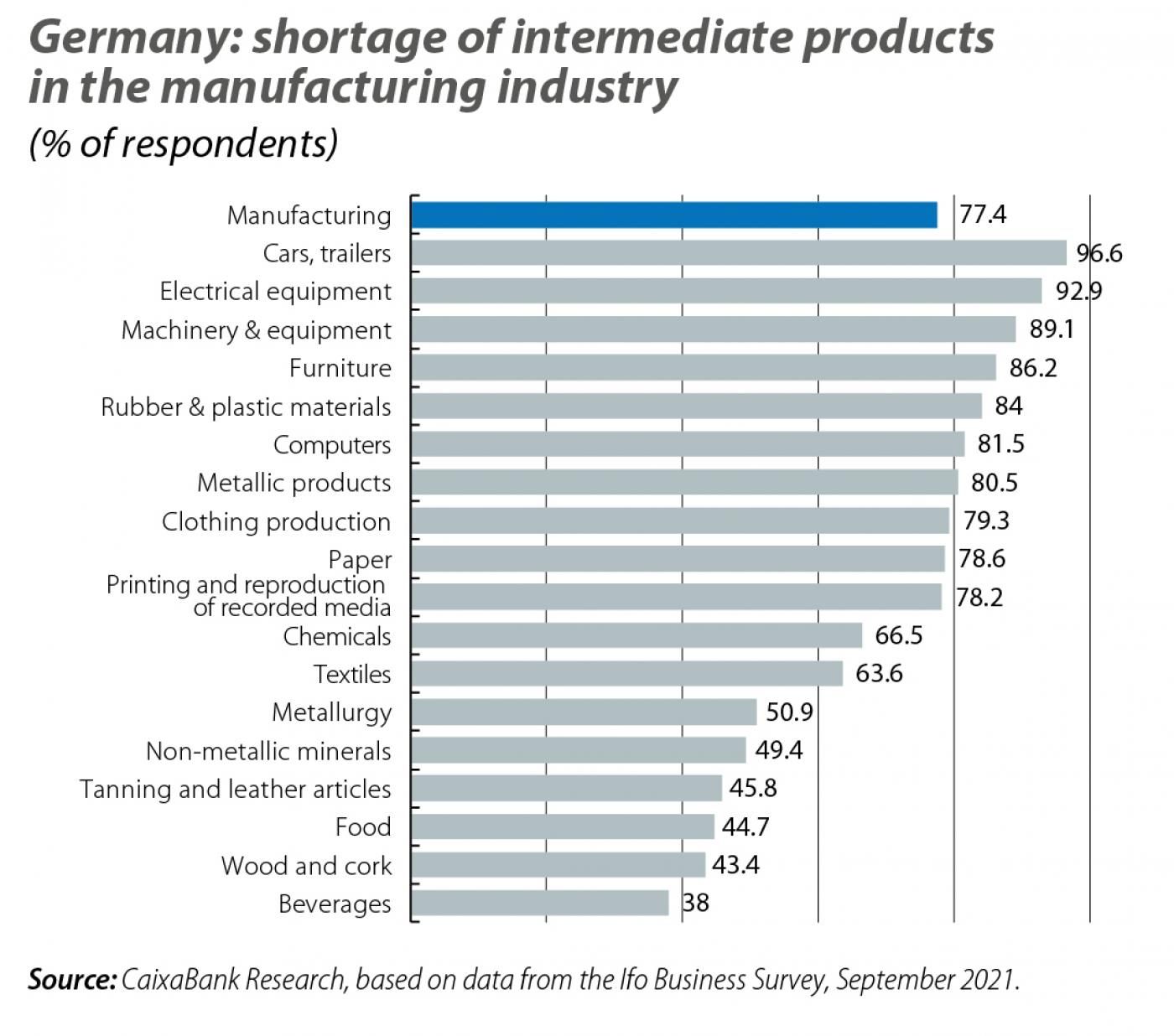 Among emerging economies, all the attention is focused on China

The two big questions surrounding the Asian giant revolve around the pulse of economic activity and the effects of the Evergrande crisis on the country as a whole. With regard to the former, GDP grew by 4.9% year-on-year in Q3 2021, hampered by the delta variant and supply chain bottlenecks. In quarter-on-quarter terms, growth stood at a very contained 0.2% (see the Nota Breve). Beyond the slowdown in the quarter, the latest economic activity indicators show a somewhat mixed tone. For instance, industrial production disappointed in September (3.1% year-on-year, versus 3.8% expected and the 5.2% of August), while retail sales grew by 4.4% in September (above the 3.5% expected and the 2.5% of August). There were also encouraging signs from exports, which continued their rally in September registering year-on-year growth of 28.1% (25.6% in August), as well as from the PMI for September, which registered a rebound in services that offset August’s decline. 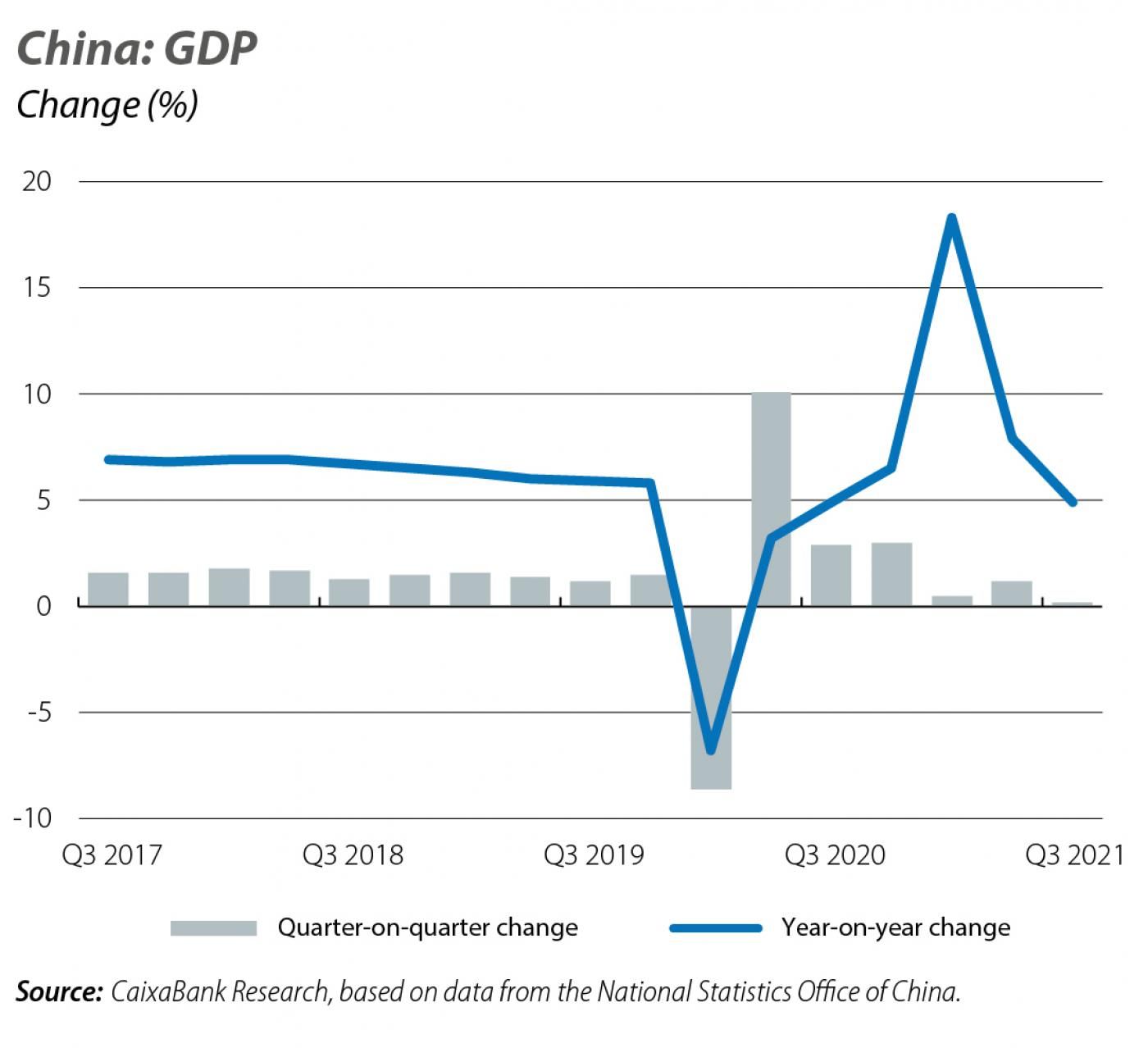 In relation to the solvency crisis surrounding Evergrande, China’s largest real-estate developer with liabilities equivalent to roughly 2% of GDP, the main risk is that of contagion in the local housing market. This in turn could hamper economic growth, which is already under pressure. However, it should be recalled that the state has the capacity to counter this potential risk and that the central bank has already announced that the stability of the real estate sector is a priority which it is taking very seriously (a message that can be taken as laying the ground for potential future stabilising interventions).