There is broad consensus among economists that assigning a price to greenhouse gas emissions is the key tool for facilitating the transition to a climate-neutral economy and containing global warming. But what level should this price reach and how would it affect economic growth and inflation? 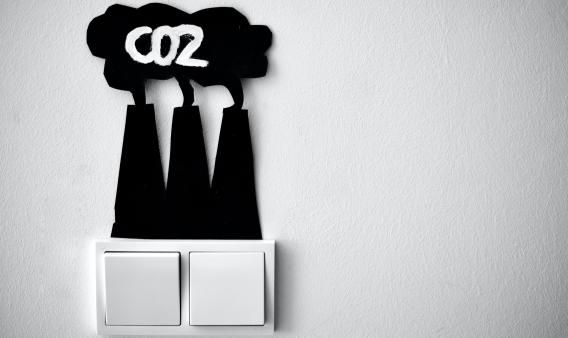 There is broad consensus among economists that assigning a price to greenhouse gas emissions is the key tool for facilitating the transition to a climate-neutral economy and keeping global warming below 2°C compared to pre-industrial levels. Yet, today, only 20% of global emissions are covered by a system that assigns them a cost,1 once again highlighting the wide gap between the policies implemented and the ambitions of the climate targets we set ourselves. Indeed, there is much debate surrounding how this price should be designed: what level should it reach, and what impact will it have on economic growth and inflation? Below we will try to shed some light on these issues.

How to calculate the price of emissions

There are two methods generally used to calculate the penalty to be imposed on harmful emissions, most commonly referred to as the «carbon price». On the one hand, there is the method which estimates the cost of the clean technology needed to replace polluting goods, services or productive models. A variety of polluting goods and services can now be replaced by clean alternatives at no additional cost, so without adding a price on carbon there are already incentives to use cleaner production models. However, there are various goods and services (mainly in industry and transportation) for which the clean alternatives are currently very expensive, so a very high carbon price (of around 1,000 dollars per tonne of equivalent CO₂, or $/TCO₂ hereinafter) would be needed to discourage their current production model.2 On the other hand, the second method is to determine the optimal price to correct the negative externalities generated by polluting activities (greater frequency and severity of adverse weather events, air pollution, etc.). The models used to estimate the price of carbon in the EU with the aim of keeping the temperature rise below 2°C place it within the range of $80/TCO₂ to $200/TCO₂ in 2030 and 2050, respectively. Those which seek to achieve net zero emissions by 2050, meanwhile, place the price at around $300/TCO₂ in 2030 and $1,000/TCO₂ in 2050.3

There is broad consensus that imposing a price on emissions would have very positive long-term effects for the environment.4 In terms of the impact on economic growth, we would see positive effects thanks to greater public and private investment in clean industries, which enable more jobs to be generated than investment in polluting industries.5 Also, imposing a price on emissions would help to reduce the risk of extreme weather events with a high economic impact.

In the short term, however, there would also be some negative effects. In particular, the main channel through which the carbon price would adversely affect growth would be lower private consumption resulting from the higher cost of goods and services affected by the introduction of a price on carbon.

Finally, the effects in terms of welfare of a price mechanism on emissions will depend on how the tax revenues are allocated. These revenues could be used either to compensate the individuals who are most affected by the rise in carbon prices, to reduce other less efficient taxes, or to invest in certain categories of public spending.

For illustrative purposes, and with the help of a global macroeconomic model, we analysed how different carbon price scenarios would impact GDP and inflation relative to a baseline scenario without a global carbon price.6 This exercise allows us to explore what economic decisions individuals and companies would take in the face of changes in the relative prices of different energy sources. Specifically, depending on the relative price of different energy sources, consumers will adjust their demand for energy and consumer goods, while companies will adjust their demand for inputs and energy sources used in the production process.7 Thus, a carbon price shock would lead to a relative rise in the cost of the most polluting energy sources and provide incentives for increased demand for cleaner sources (as well as for less emissions-intensive goods and inputs). At the same time, this helps to mitigate the adverse effects of further global warming on GDP. In this exercise it is assumed that the revenues from this mechanism are used to rebalance the public accounts, without changing the existing structure of public expenditure or taxes in each country.

With the introduction of the carbon price, GDP in 2050 would be slightly lower than in the baseline scenario (see first chart), mainly due to lower private consumption and investment due to the rise in the cost of goods and services affected by the introduction of this price. In 2050, the negative impact on the euro area’s GDP would be less than 2%, even in the most ambitious climate transition scenario – with a higher emissions price imposed to reach net zero that year – or in the scenario with a late transition (see first chart). The results are similar for the US, although China would be more adversely affected in the more ambitious climate scenario – its GDP in 2050 could be 6% lower that year compared to a scenario without a global carbon price – as the country is more dependent on more polluting energy sources, meaning that greater effort will be required in the transition. That said, in the scenario with a global carbon price that would allow the temperature rise to be limited to less than 2°C in 2050 accompanied by a significant increase in investment in renewable energies, the negative impact on GDP would be very small in the euro area and the US, and contained in the case of China. 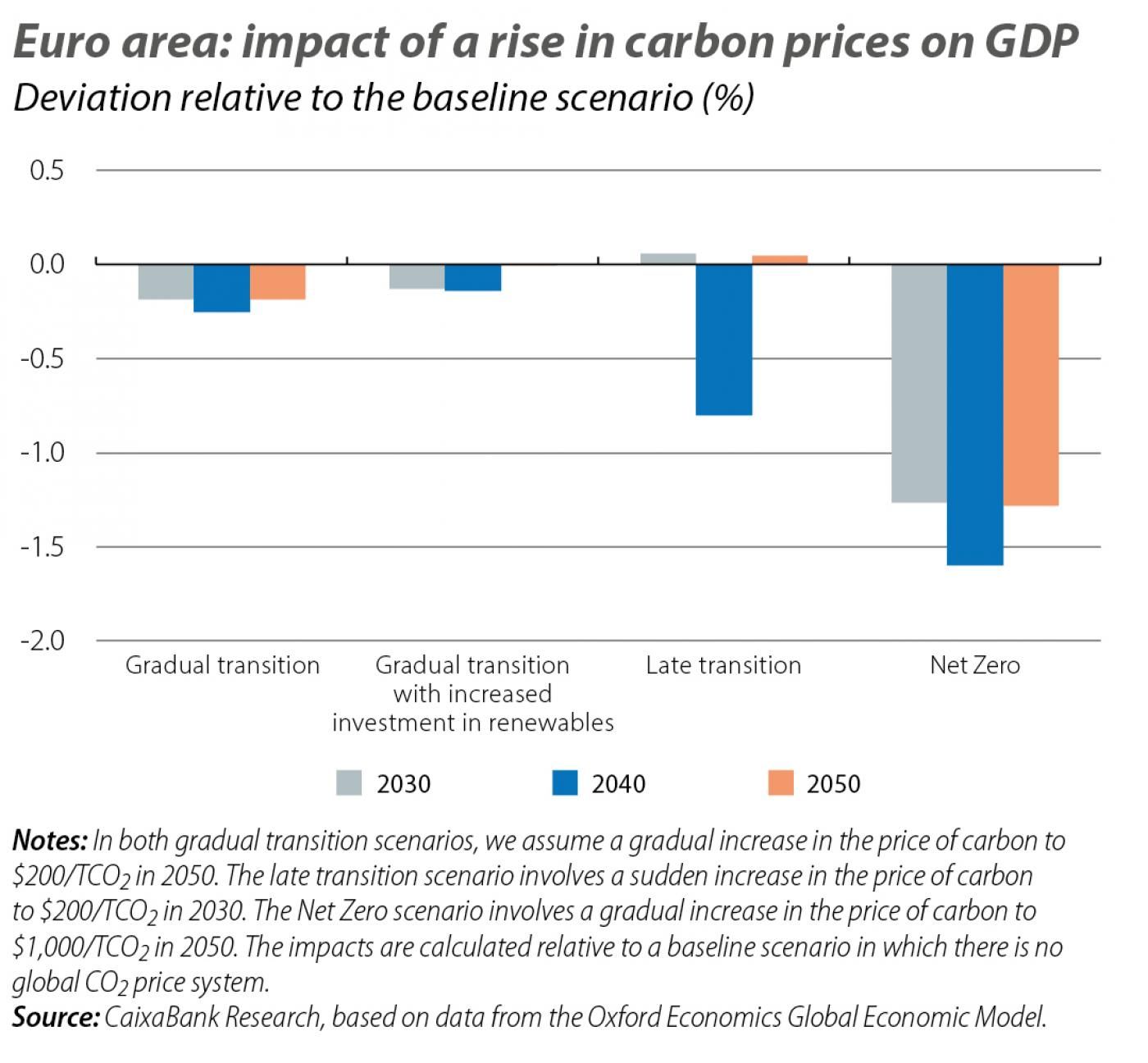 As for inflation, ensuring that the carbon price is increased gradually and predictably is key to keeping it at bay. This would not be the case for a disorderly energy transition with a high emissions price imposed suddenly in 2030 to compensate for its late introduction (see second chart). In that scenario, inflation in the euro area would rise sharply that year and have a contractionary effect on GDP, which in turn would generate volatility in inflation over the next few years.8 Such a scenario has some parallels with the energy shock of 2021. The sudden surge in energy prices would lead to a rise in headline inflation in the short term, and this would dent economic growth due to the contraction of private consumption and the rise in interest rates needed to contain inflationary pressures. 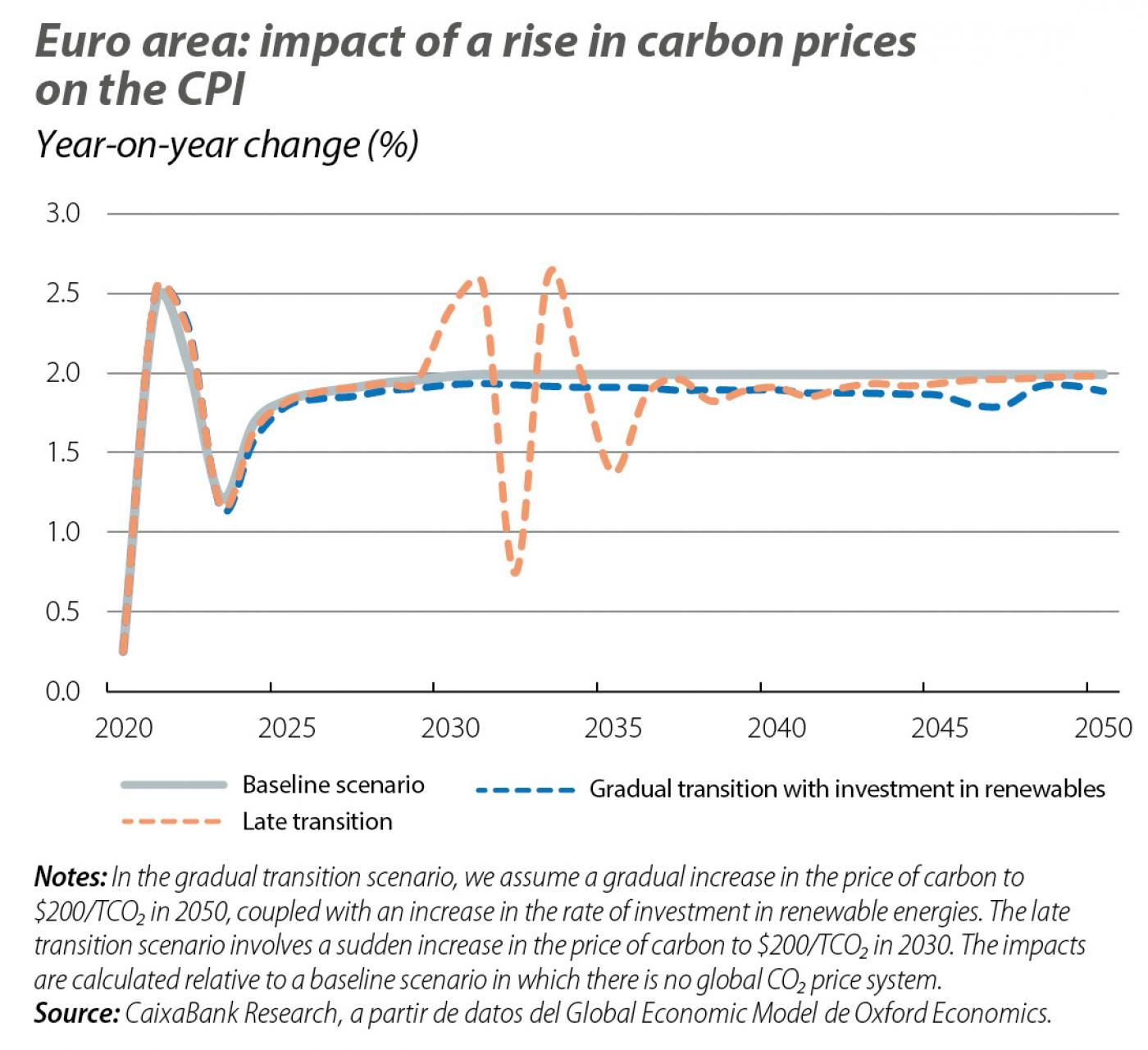 In contrast, a scenario with a gradual increase in the price of carbon combined with a steady rate of investment in renewable energies would result in a long-term disinflationary impact in the euro area, thanks to lower electricity prices (remember that the marginal cost of renewable energies is negligible). In this regard, the International Energy Agency considers the development of renewable energies to be the key, since consumers would be much better protected against circumstances such as those experienced in 2021 with the significant rise in electricity prices: if renewables were to make up a larger portion of the energy mix, commodity price volatility would affect a smaller portion of energy generation activities, so electricity bills would tend to be more stable.

However, the challenge of implementing the carbon price in a coordinated manner between advanced and emerging countries is daunting and not without difficulties. One such difficulty relates to how to manage the winners and losers of the transition, both between different economies and within each one. Designing mechanisms that help minimise the impact on those who will be potentially most affected by the carbon price will be key to its success.