This winter’s drought has highlighted one of the most important challenges facing Spain’s agrifood sector: improving how water resources are used given the prospect of their availability becoming more limited. 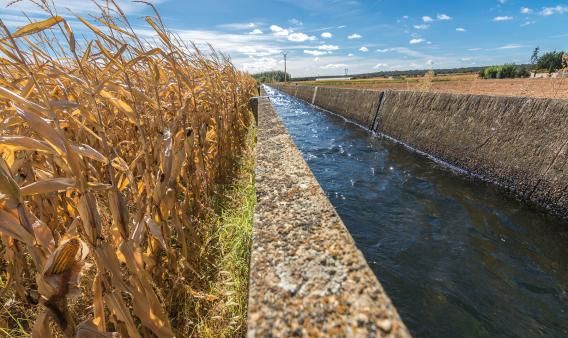 This winter’s drought has highlighted one of the most important challenges facing Spain’s agrifood sector: improving how water resources are used given the prospect of their availability becoming more limited. Climate change demands that huge efforts be made to adapt Spain’s irrigation system to the new circumstances and, in this respect, the investments made possible by the Next Generation EU (NGEU) funds will be a huge support. The main objective of these funds is to modernise irrigation systems and improve their governance, promoting water savings and energy efficiency through more efficient irrigation systems, self-consumption electricity generated from renewable energy sources, and the use of non-conventional water sources such as reclaimed waste water or desalinated water.

Water scarcity, a challenge for the world’s agriculture

Water is a crucial resource for agriculture. Globally, 72% of all freshwater extracted is used by the agricultural sector. Of the remainder, 12% is used by industry and to produce energy, while 16% is used directly for human consumption. The FAO estimates that, by 2050, agriculture will have to produce almost 50% more food, fibre and biofuel than in 2012 to meet global demand,11 a goal that will be difficult to achieve without increasing the area devoted to irrigation considering the higher yields produced: non-irrigated agriculture produces 60% of the world’s food and occupies 80% of cultivated land, while irrigated agriculture produces 40% on 20% of the land.

Water is an essential commodity for agriculture. Climate change is making water a scarcer and more unpredictable resource.

More intensive agricultural practices are putting more stress on freshwater resources, further exacerbated by the consequences of climate change. In many regions of the world, including some in Spain (see the map below), the resource is subject to high levels of water stress.12 Furthermore, water stress levels are likely to increase in those areas that are currently under most stress as the effects of climate change intensify. In Spain, an overall larger reduction in water resources is expected in the south of the mainland and on the islands.13 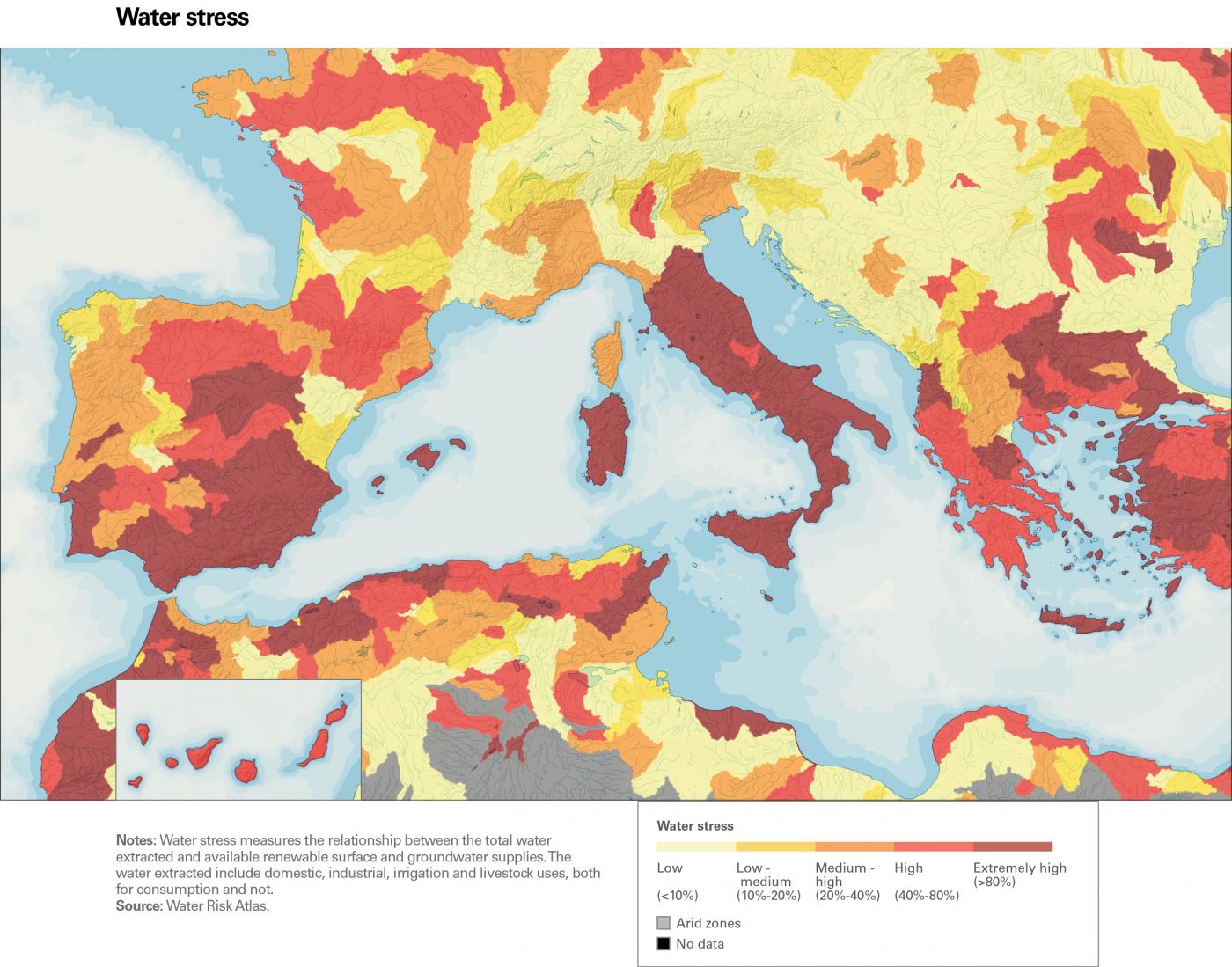 This serious situation makes it essential to have a system of integrated planning and management of water resources that guarantees supply in sufficient quantity and quality, based on criteria of sustainability, adaptation to climate change and in line with the principles of the circular economy. Likewise, water management must promote compliance with the environmental targets set by the EU in the European Green Deal and the Water Framework Directive, as well as achieving the targets set by the United Nations 2030 Agenda in Sustainable Development Goal 6 (SDG6, Ensure availability and sustainable management of water and sanitation for all).

The importance of irrigation in Spain

In Spain, the agricultural sector accounts for 82.1% of water use (households use 12.8% and the remaining 5.1% is used for other economic activities).14 In fact, irrigation is a fundamental part of our agrifood system: the irrigated area in Spain accounted for 22.9% of the cultivated area in 2021 (7.8% of the total geographical area) but its production contributes slightly more than 50% of the final plant production. Without any doubt, irrigation is the fundamental pillar on which the production and export potential of the fruit and vegetable sector rests. In fact, Spain is the leading exporter of fruit and vegetables in the EU and one of the top three exporters in the world, along with China and the US, a prominent position that has given it the name of «the vegetable garden of Europe».

Irrigation has undergone a continuous process of modernisation that is leading to the progressive expansion of efficient irrigation techniques.

The charts below show the considerable increase in irrigated land in Spain between 2004 and 2021, up by more than half a million hectares to 3.9 million hectares at present.15 During this period, however, water consumption by the agricultural sector has remained fairly stable (or has even tended to decrease slightly) thanks to a significant effort to modernise irrigation systems. In fact, over the years the area irrigated by localised (drip) systems, a much more efficient technique with a very low demand for water, has increased to the detriment of the gravity system, which consumes much more. Sprinkler systems, a method more typical of herbaceous crops, have also been implemented over the years.

The amount of irrigated land has increased considerably

Breakdown of water used by farms by irrigation technique

This expansion of more efficient irrigation techniques reflects a coherence with the irrigation policies developed in recent years aimed at achieving sustainable, efficient agriculture. However, as already mentioned, the modernisation of irrigation has not been accompanied by aggregate savings in water as there is often a simultaneous intensification of crops, achieving a higher yield per m3 of water used but, on the other hand, the amount of irrigated water returned to bodies of water is reduced.16

By crop type, the largest areas being irrigated in 202117 were: grain cereals, which accounted for 24.1% of the total irrigated area, followed by olive groves (22.6%), non-citrus fruit trees (10.6%) and vines (10.3%). These three types of crops are the ones that have seen the greatest growth in irrigated area between 2004 and 2021, olive groves particularly, adding almost 400,000 hectares. On the other hand, if the irrigated area is analysed in the total of each of the crop groups, it can be observed that irrigation is the majority in some of them, such as citrus and vegetables (93.7% and 88.4%, respectively).

The irrigation technique used depends largely on the type of crop. Gravity irrigation is mainly used for cereals and forage crops, accounting for 45.0% and 53.4% of their respective irrigated crop areas. Sprinkler irrigation is mainly used for tubers (77.9%) and other herbaceous crops such as legumes, industrial plants and cereals. Finally, localised (drip) irrigation is the most common system for woody crops such as olive groves, vines and fruit trees, both citrus and non-citrus. The drip irrigation system is also important for vegetables (52.2%), including the area of land covered by greenhouses. 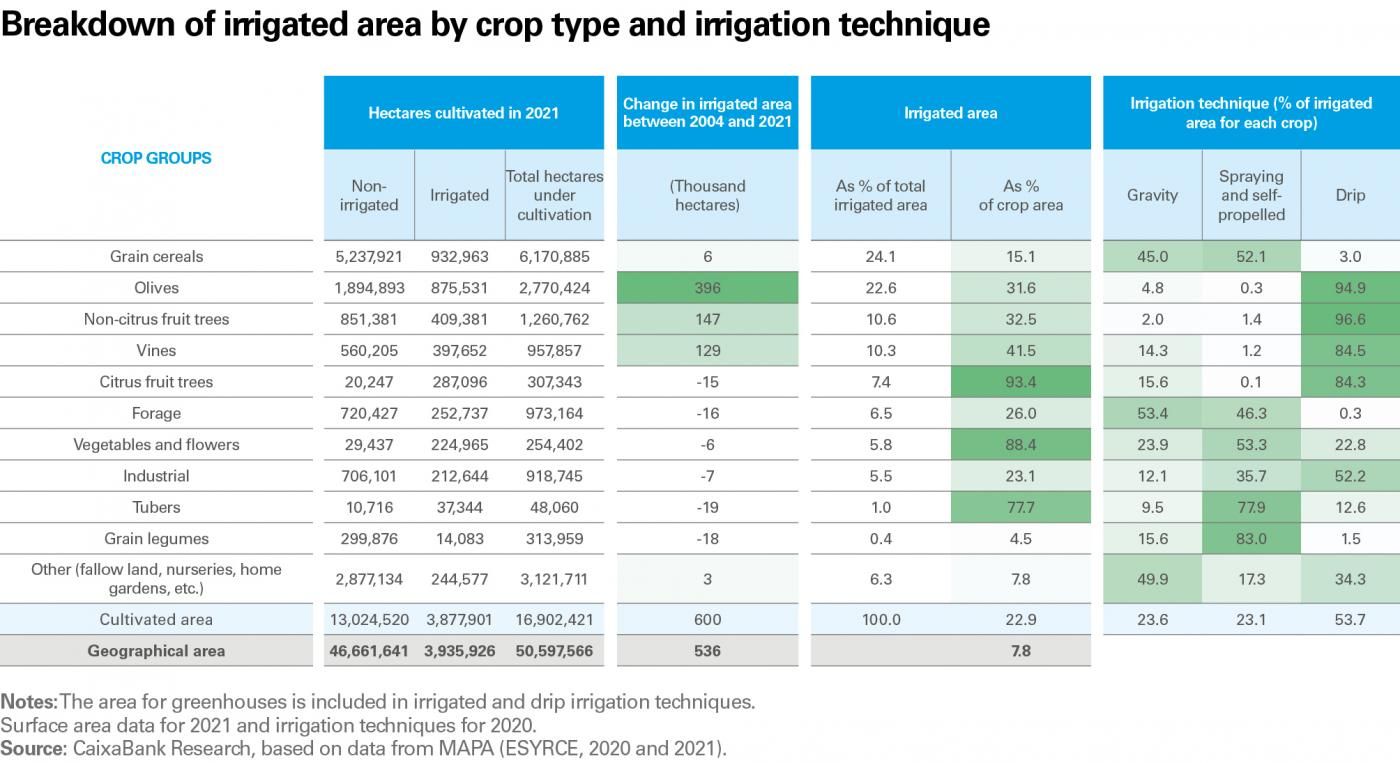 The extent of irrigation, crop specialisation and irrigation techniques show a remarkable geographical diversity (see the table below). For example, in the northern regions, abundant rainfall makes irrigation unnecessary in many cases while the plateau, which is more water-deficient, has a moderate share of irrigation. The Community of Valencia and the Region of Murcia are the autonomous regions with the highest percentage of irrigated agricultural land (around 40%). As is widely known, they specialise in the production of fruit and vegetables, which tend to use drip irrigation techniques.

Andalusia is the second region with the highest percentage of irrigation as a proportion of its geographical area (12.9%), with a significant presence of drip-irrigated olive groves. In Castile and Leon, cereal production is dominated by sprinkler and self-propelled irrigation, while vines predominate in Castilla-La Mancha (51% of the region’s irrigated area is devoted to this crop) with drip irrigation. Gravity irrigation is mainly found in the irrigated lands of the Ebro basin (Catalonia, Aragon and Navarre) for herbaceous crops. Irrigated crop yields are naturally higher than non-irrigated yields, with notable differences across different crop types and regions. Note that regional differences in yield can be considerable for certain crops, even between plots located in close proximity because yield can be affected by many other factors in addition to irrigation (plot orientation, environmental factors, fertilisers, etc.). For illustrative purposes, the following table shows the average irrigated and non-irrigated crop yields, measured as the number of kilograms produced per hectare for three crops that are representative and widespread in Spain: grapes for processing (wine), olives for milling (olive oil) and soft wheat. Irrigated crop yields are higher than non-irrigated yields, with notable differences across different crop types and regions.
The NGEU funds: a fresh impetus for modernising irrigation

The Plan to improve efficiency and sustainability in irrigation (investment 1 of Component 3 of the Recovery, Transformation and Resilience Plan, PRTR) establishes an investment of 563 million euros to modernise over 100,000 hectares of existing irrigated land.18 In 2021, around 260 million euros of this item had already been allocated, corresponding to the first phase of the irrigation modernisation programme implemented by the public corporation for agricultural infrastructure (Seiasa). The Plan prioritises those actions with a high impact on environmental sustainability or with an important innovative component, such as the incorporation of technologies and digital tools in irrigation communities to achieve more efficient irrigation.19 As for actions with a high environmental impact, priority is given to irrigation modernisation actions that include the generation of self-consumption of electricity from renewable energy sources; for instance by using water conduits to generate electricity, or actions that use non-conventional water sources such as reclaimed waste water or desalinated water.20 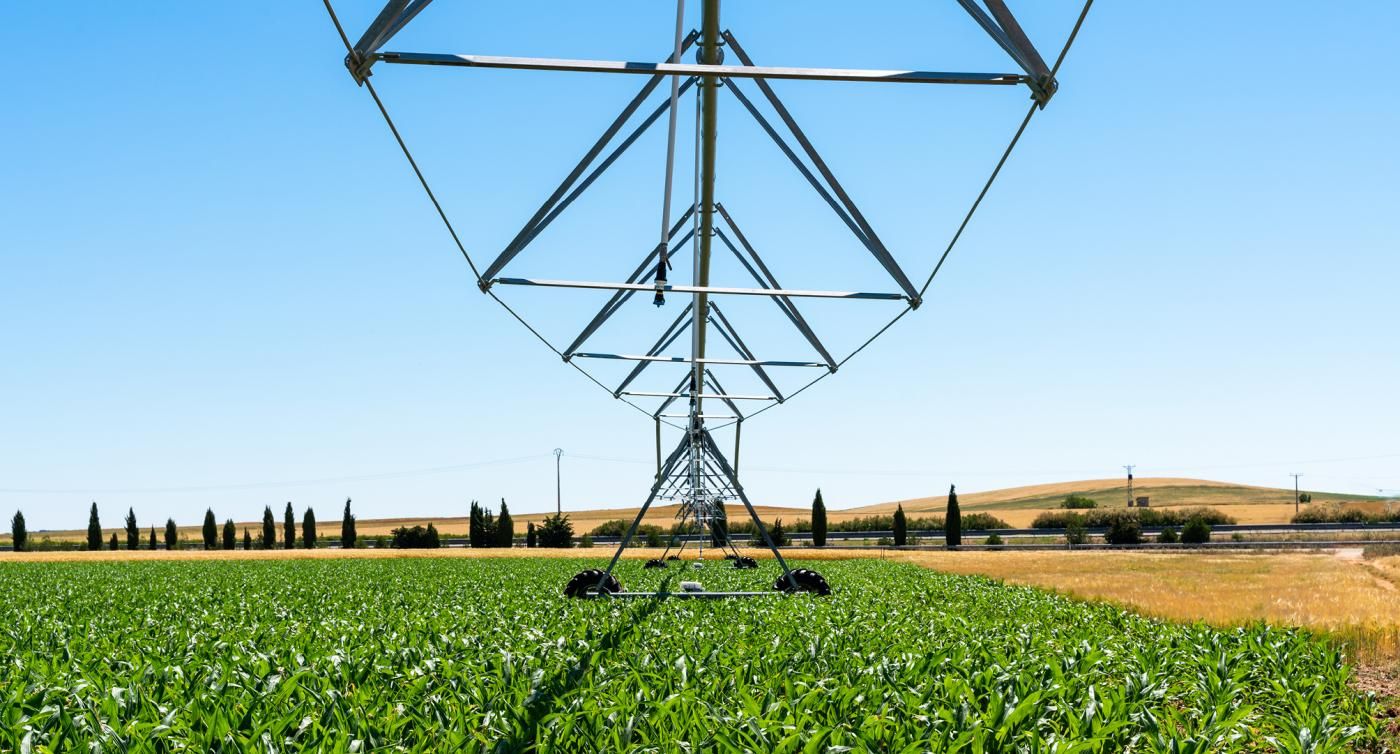 Modernising irrigation should help to comply with the EU Water Framework Directive as it contributes to the protection of surface water by reducing its extraction for irrigation. It can also help to meet the objectives of the Nitrates Directive21 and those of reducing soil contamination from phytosanitary products, since the implementation of sprinkler and drip irrigation systems enables fertilisers and phytosanitary products in the irrigation water to be added the dose strictly necessary and at the time the crop needs them. The use of reclaimed water, which already contains nutrients, would also help to reduce the amount of fertilisers used. All this would be in line with the EU policies that form part of the European Green Pact, such as the Farm to Fork strategy and the European strategy on adaptation to climate change.

The PRTR also has significant measures to encourage reforms, along with the investment plan. The government proposes to establish a National Irrigation Board, a Spain-wide governance mechanism that will enable all representatives of public authorities and affected sectors to promote and facilitate cooperation, consultation and the sharing of information on all aspects related to irrigation. An Irrigation Sustainability Observatory will also be set up to provide objective data on the economic, social and environmental impact of irrigation on the territory.22

In short, irrigation is essential for agricultural production, key to food security and a fundamental pillar of rural development. Its modernisation is crucial in order to achieve a competitive, profitable and water-efficient agricultural industry. Looking to the future, climate change scenarios for Spain predict that less water will be available (available water resources will decrease between 12% and 40% before the end of the century, depending on the region) and a more irregular distribution of rainfall, making it essential to continue improving the efficiency and sustainability of irrigation.