How could the rise in interest rates affect household budgets in Portugal?

The rise in inflationary pressures in the euro area has contributed to a significant shift in the ECB’s monetary policy. Whereas at the beginning of the year we expected the first official rate hike to occur at the end of 2023, it now looks highly likely to happen within the next few months, given the ECB’s concerns over the risk of a mismatch in inflation expectations in the medium and long term.

The expectations of a rise in official rates have already translated to the interbank market; in mid-April, the 12-month Euribor returned to positive values, after six years in negative territory. The rates recorded at the beginning of May (in excess of +0.20%) mark a significant increase from the lows of 2021 (–0.49% on average in the year) and are in line with those of early 2015. The financial markets expect this trend to continue in the coming months (see first chart). 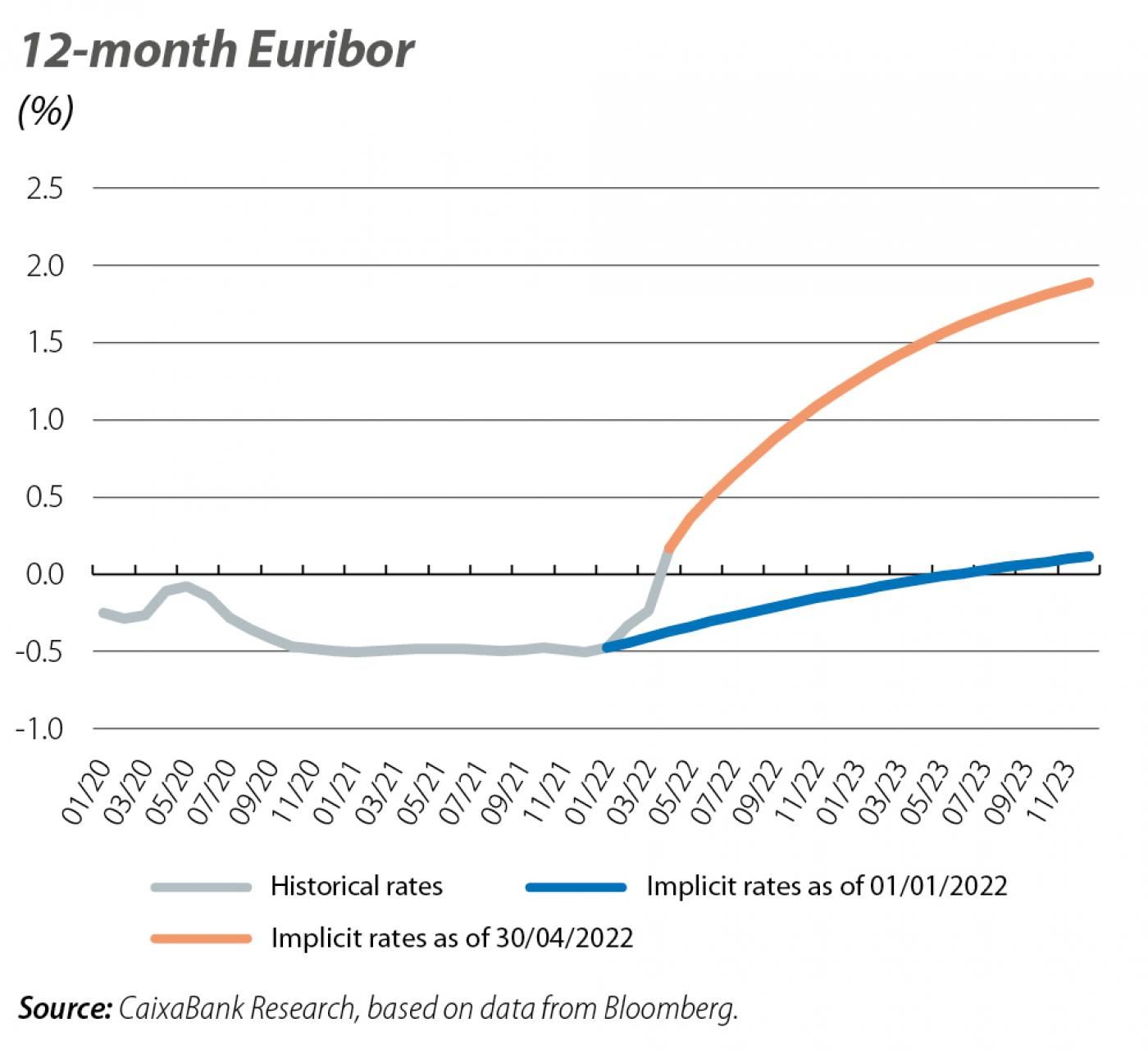 This rate behaviour is already being felt in the portuguese housing credit market; specifically, the average interest rate on new lending for housing rose to 1.03% in March, compared to 0.81% at the start of the year.

What goes on in the credit market is crucial to the day-to-day lives of Portuguese households; in fact, about 68% of household indebtedness is related to housing credit. Since mid-2020, household indebtedness for the purchase of housing has been on the rise, bucking the downward trend of the previous years. By the end of 2021 it had reached almost 5% above pre-pandemic levels, albeit still below the peak of late 2010 (–20%, i.e. –25 billion euros).

In this context, what happens to interest rates takes on great importance for anyone with a mortgage. This is particularly the case in Portugal, where the vast majority of loans continue to be taken out at a variable interest rate (unlike in most of Europe): in 2020, over 93% of outstanding loans were at variable rates, representing some 92% of the total amount owed; in that same year, over 82% of the new loans granted and of the amount of those new loans were at variable rates,1 with the 6 and 12-month Euribor being the main main benchmark indices.2 As for the new loans granted in 2020, some 74% of them (both in number and in amount) were indexed to the 12-month Euribor and around 25% to the 6-month Euribor.

The average amount of capital owed, meanwhile, has also been increasing, and combined with the restrictions on the maximum repayment term for new loans, this means that households’ monthly mortgage repayments are going up. In fact, in March, the average amount of capital borrowed in contracts signed in the last three months was in excess of 123,000 euros, compared to 103,000 euros at the end of 2019 – a parallel trajectory to home prices.3

Faced with all these factors, there is no doubt that interest rate fluctuations have a significant impact on household budgets. This fact is clearly reflected in the second chart, where we estimate how the monthly instalments of a 33-year, 120,000-euro home loan could change, based on the implicit market rates for the 12-month Euribor.4 The financial markets are anticipating that the 12-month Euribor will reach 1.18% at the end of 2022 and 1.90% at the end of 2023, in stark contrast with the –0.50% registered at the end of 2021. If these implicit market projections end up transpiring, it would mean that a borrower with such a mortgage loan would be paying an additional 100 euros by the end of this year compared to the end of 2021, and at the end of 2023 they would be paying 140 euros more than in December 2021. This is significantly different to what could be expected based on the market expectations at the beginning of 2022: the increase at the end of 2022 in this case would amount to around 20 euros per month, and by the end of 2023 it would be around 35 euros. 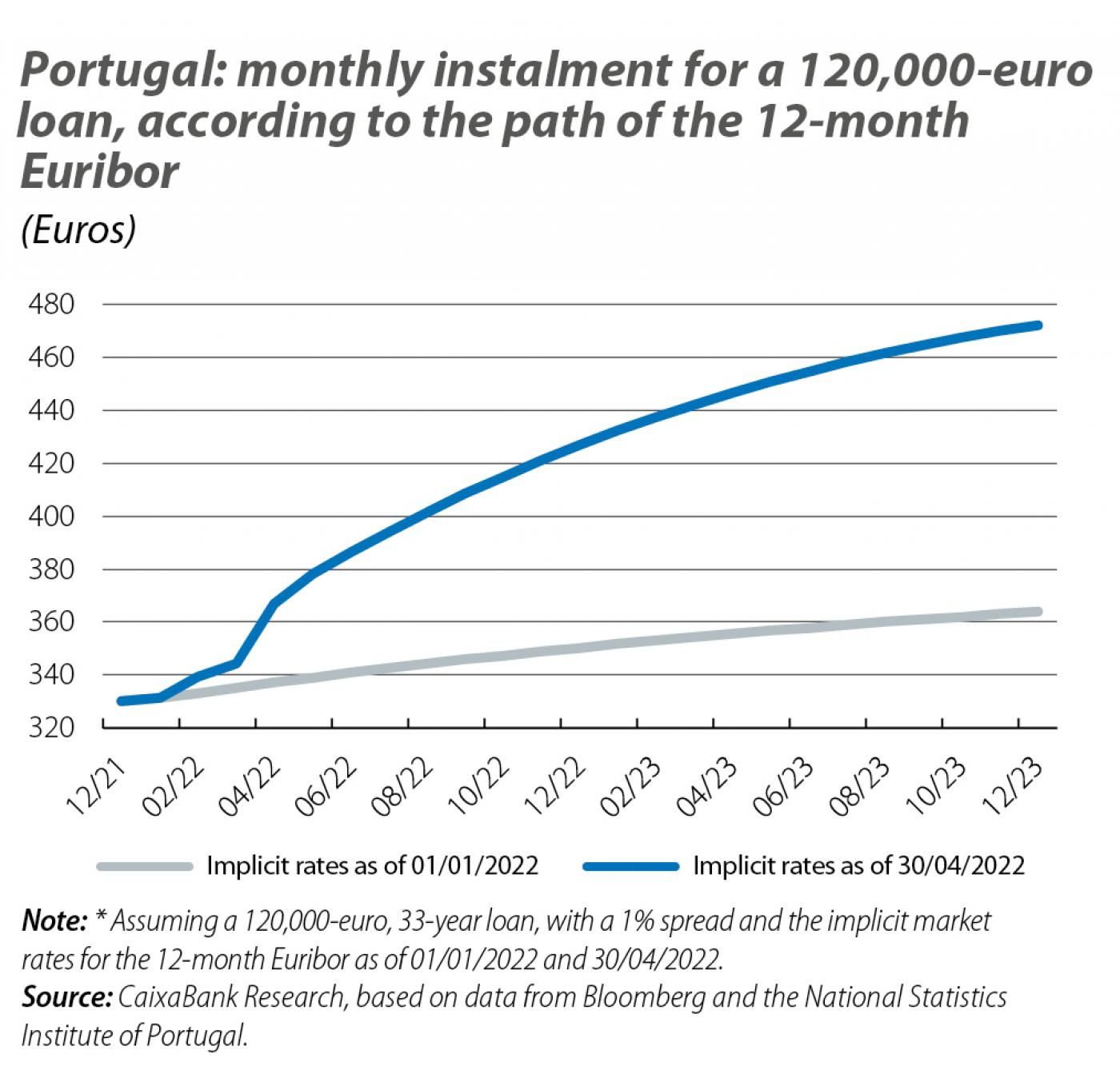 With the sudden shift in expectations regarding the ECB’s interest rate rises, the recent alteration of the macro-prudential measure related to maximum repayment terms and its linkage with the borrower’s age,5 as well as the rising housing, food and fuel, we can expect to see a cooling in housing demand and a pressure on housing budgets.