The test in 2022 has been demanding, but with the prospect of energy prices in 2023 still above those before the outbreak of the war in Ukraine, economic policy will once again be at the heart of the debate and will have to roll up its sleeves to propose recipes to cushion this protracted shock. 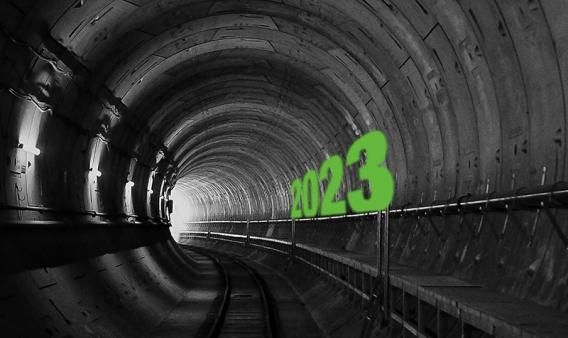 Economic policy is on a tightrope, as it faces the titanic task of mitigating the impact of the energy shock on households and businesses in a difficult context and with limited fiscal margin for manoeuvre, given that the public accounts have already been dented by the COVID-19 pandemic – indeed, public debt in the euro area surpassed 100% of GDP in 2020, and the deficit exceeded 5.0%. The test in 2022 has been demanding, but with the prospect of energy prices in 2023 still above those before the outbreak of the war in Ukraine, economic policy will once again be at the heart of the debate and will have to roll up its sleeves to propose recipes to cushion this protracted shock.

The line separating success from failure is thin, and success is not guaranteed. The theory is clear, but putting it into practice is not so simple. There are two types of action in the current situation: the first, providing aid through income policies such as direct subsidies; the second, through price interventions (price caps, reducing excise duties on energy and VAT, etc.), and both types of action can be either specific to certain groups or generalised across the wider population. Economists from the major economic institutions (OECD, IMF, etc.) advocate temporary measures that are highly targeted towards vulnerable households to ensure they do not bear the full brunt of the rise in energy prices. Thus, generalised measures – whether price controls or sweeping direct aid – are not recommended, for several reasons: 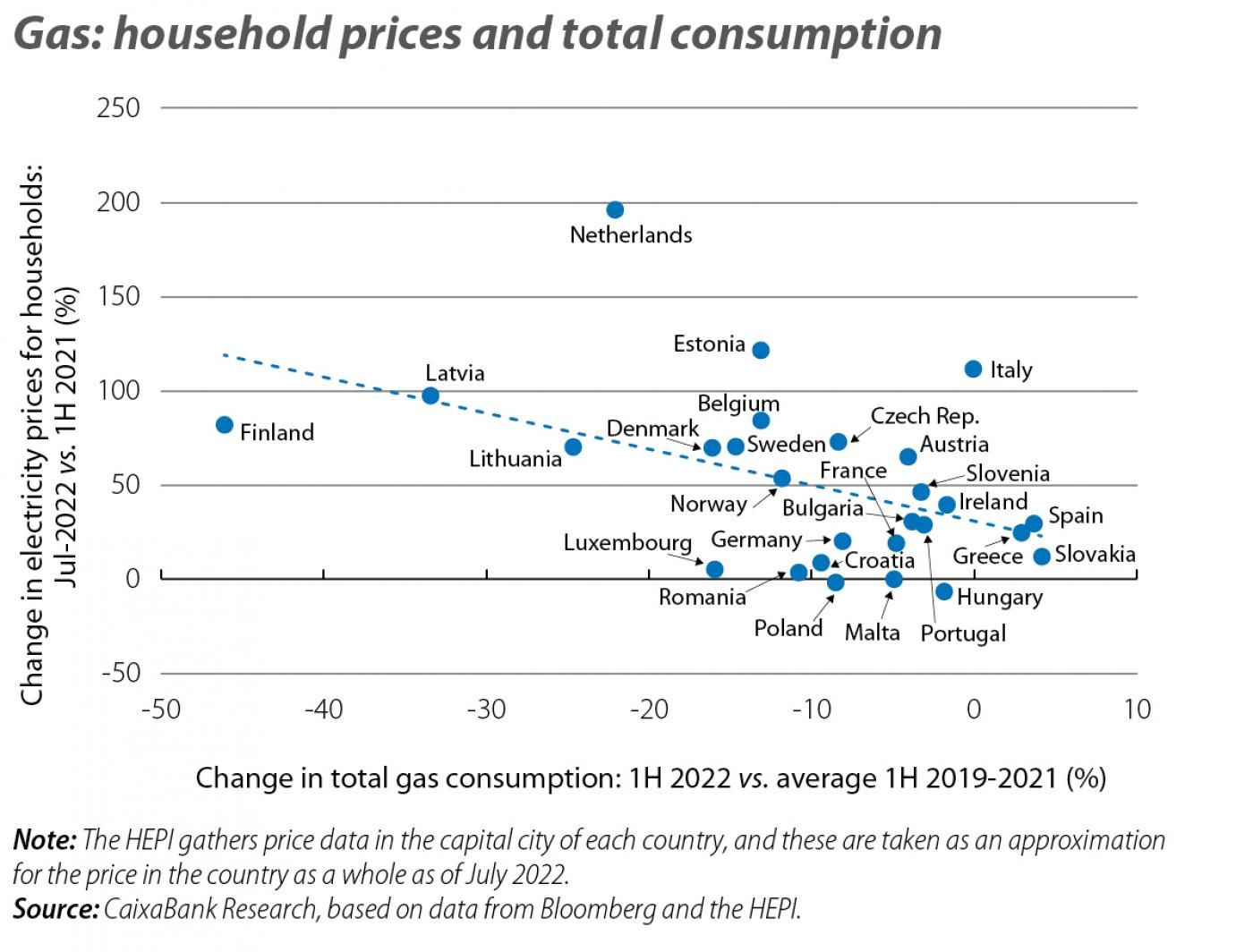 From theory to practice: price caps and less targeted forms of aid

Textbook theory is all very well, but governments then have to apply it in a context of social discontent that is essential to tackle. Moreover, it is not always easy to identify who the most vulnerable members of society are. In this regard, advanced economies have faced a veritable energy storm in 2022, and the response of most governments has been closer to that of France (the paradigm of generalist measures and price interventions) than to that of the United Kingdom under Boris Johnson (before its dissolution, his government’s actions were close to the IMF’s recommendations). As can be seen in the second chart, most of the support in 2022 has focused on economic policies for the entire population that prevent the rise in wholesale energy prices from being passed on to final consumers (price caps, reductions in levies on energy consumption and production, and VAT cuts for energy products, etc.), followed by generalised income policies (either affecting the whole population or very large groups irrespective of their income level, such as users of public transport or those in employment). The measures aimed at supporting vulnerable groups, on the other hand, have been much more limited. 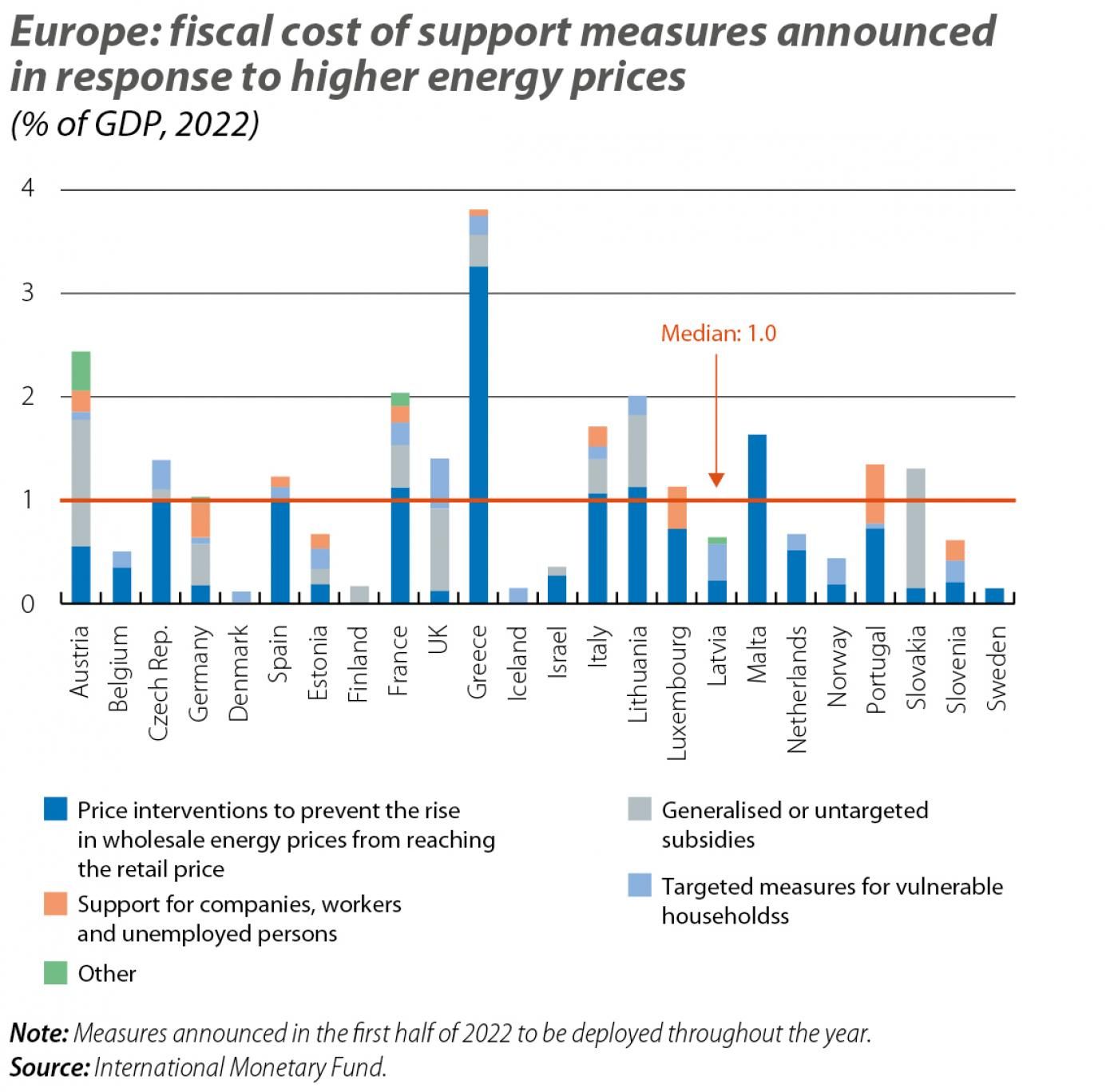 In this context, the proposal put forward by a German think tank contains some interesting elements. They suggest establishing a subsidy on 80% of households’ gas consumption (70% for companies), which would result in considerable savings on gas bills.1 At the same time, the scheme maintains the incentives proposed to reduce gas usage: market prices apply on the remaining amount and, moreover, the subsidy would refer to the quantities consumed in 2021. However, they propose applying it to all consumers.

Nevertheless, the scale of the German plan (200 billion euros, slightly over 5% of GDP)2 has caused a stir due to the risk of distorting the level playing field in the European single market. This brings us to the role that the EU must play, for Europe will better weather the crisis if it is united rather than disbanded.

On the one hand, the EU can play a coordinating role in order to avoid negative externalities and exploit positive ones. As an example, with each government focused on securing its own gas supply, the EU could end up with substantial overcapacity in the medium term.3 In addition, the instinctive national response has generally been to sustain demand with subsidies for gas and electricity consumption, which generates negative externalities and drives up prices across the EU. In the current crisis, however, European solidarity must focus on cutting energy consumption (rather than increasing common spending, as was the case during the pandemic): the key thus lies in coordinating the cuts in usage.4 Thus, the European Commission’s plan is a step in the right direction, insofar as it proposes reducing electricity and gas consumption (by 10% and 15%, respectively).5 That said, there are some voluntary elements to these cuts and the plan is not free of exemptions.6

In the same vein, EU coordination is also important for ensuring the efficient flow of energy between countries. This applies in both the short and long term. In the long run, the decarbonisation of the economy and increased renewable production will lead to more variable power generation, increasing the benefits of a Europe-wide interconnected grid. Improving interconnections in the short term is also essential. The case of liquefied natural gas (LNG), which is key to replacing Russian gas in the current crisis, offers a prime example: 25% of the EU’s LNG import capacity is located on the Iberian Peninsula, which in practical terms is disconnected from the large European market. In this regard, the recent agreement between Spain, France and Portugal for the construction of a sea pipeline between Barcelona and Marseille, which in the medium term could temporarily transport gas from the Iberian peninsula to the rest of the continent and in the long term will be used for green hydrogen, is a step in the right direction.

Finally, the EU must ensure a level playing field in the European single market. In particular, given the disparity in Member States’ fiscal margin (which the powerful German package has only underscored), a European fund that guarantees a minimal level of support for businesses and households in all countries would make sense.7 This could involve aid being provided subject to certain conditions being met in order to encourage cooperation between Member States and favour well-designed national policies (for instance, by penalising the implementation of policies that oppose energy saving or which limit international energy flows, and allocating more funds to countries that strive to increase supply, etc.).