After the elections in France and Germany, attention in the euro area has now turned to Italy’s upcoming General Elections on 4th March. If opinion polls are confirmed, no party win a clear victory and none of the three large political blocs, the Centre-Right, Five Star Movement (M5S) and the Centre-Left, will secure an absolute majority in both houses.1 Therefore, the most likely outcome will be either a minority government or the beginning of a period of negotiations to form a coalition, bringing together parties with very different political leanings. Although it is true that Italy is used to relatively inconclusive electoral outcomes and unstable governments – it has had 64 governments since WWII – the rise of populist parties to power is a source of concern.

In particular, M5S and the bloc of Centre-right, both euro-sceptic and with populist tendencies, would be strongly supported by voters and could possibly form a government. One of their most notable proposals is the intention, expressed on several occasions by the party leaders, to take Italy out of the euro. Both groups have recently moderated their stances, however. In fact, their respective manifestoes do not include any proposal to withdrawal from the single currency.

Their proposed tax reforms are also a cause for concern. Specifically, the centre-right bloc wants to implement a flat tax on both income and corporate income, accompanying lower taxes with (unspecified) cuts in spending. For its part, M5S proposes to reduce income tax although it has not specified by how much or how this would be carried out. However, whatever the new government’s leanings, it will find it difficult to implement a very expansionary fiscal policy. Given the country’s high level of public debt, such a move would result in an immediate sharp increase in Italy’s risk premium. In any case, both blocs will want to push as far as they can and this could cause tension with European partners.

Finally, it is also worrying that no election manifesto, of any of the three large blocs, includes a detailed strategy to boost economic growth and tackle Italy’s persistent economic vulnerabilities. Let us examine three of these.

First, the banking sector remains weak. Although considerable progress has been made over the past few months, not all banks are in a strong position to support economic growth. Asset quality has improved considerably, in part thanks to insolvency procedure reforms and the sale of NPLs. However, the sector’s average NPL ratio remains high, at 11.8% of total loans,2 and well above the EU average (4.2%). This continues to damage lending, especially to SMEs, and is one of the reasons for the slow recovery in corporate investment.

Another significant source of vulnerability is the high level of public debt, which represents 134.7% of GDP and remains well above the euro area’s average3 and the threshold set on the EU’s fiscal rules.4 This curtails the ability of fiscal policy to respond to adverse shocks and makes Italy particularly vulnerable to any changes in financial conditions.

Lastly , the Italian economy’s low growth capacity is also a cause for concern. A simple example illustrates this perfectly: in the past 15 years, Italy’s GDP per capita has fallen by 5.0% while it has grown by around 11.0% in the euro area and by 17.0% in the US. The World Economic Forum’s competitiveness index provides us with some clues as to which are Italy’s weak spots (see the chart). Although these weaknesses are well-known, all the evidence suggests the new government will not tackle them with enough determination or ambition. Italy still believes that piano piano si va lontano.

1. The electorate will vote in 630 Congress members and 315 Senate members.

2. Consolidated data, according to the EBA Quarterly Risk Dashboard Q3 2017. 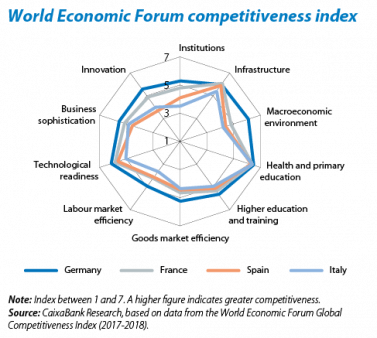