China’s economic growth under the microscope: past, present and future

Analysing the shape of China’s economy is no mean feat. But such an analysis is even more necessary than ever: The Chinese economy has become huge in global terms (representing 18.8% of the world’s GDP in purchasing power parity compared with 15.1% for the US), it is also increasingly interconnected with the rest of the large economies and it is in the middle of a challenging rebalancing of its economy towards services and consumption. This article introduces an economic activity index to help us assess China’s economic growth evolution and determine just how accurately the official data reflect its actual rate of economic activity. There is good reason for such an exercise. As we will see, the results will provide us with a more accurate diagnosis of the true capacity and limitations of China’s economy to undergo an orderly and successful rebalancing.

First of all, it is rather difficult for the economists from China’s National Bureau of Statistics (NBS) to accurately measure and aggregate economic data in order to produce the official GDP figures. One of their problems is the incentive for Chinese civil servants at a provincial level to falsify the data they report as they are assessed based on these growth figures. The bias is potentially sizable. At the beginning of this year the region of Inner Mongolia, and the province of Liaoning in 2017, have both admitted they have exaggerated their data over the past few years. China’s NBS takes such technical difficulties into account when aggregating the data. Nevertheless, the official statistics have been highly controversial due to the series’ great smoothness since 2012.

To better assess the trend in China’s economic growth rate, we have constructed an aggregate index for economic activity that takes into account the main indicators from four key sectors in the economy (car sales, electricity production, new floor space available in real estate and rail freight transport turnover), as well as industrial production and retail sales. The result is quite surprising: until 2010, growth in the economic activity index followed a trend very similar to official GDP growth, with the two closely correlated. However, since 2011 these two variables have diverged significantly. While the official data report a slight but sustained slowdown in the economy, the economic activity index is more volatile with three sharp decreases in 2012, 2014 and 2015, the last coinciding with stock market turbulence in the same period. Moreover, except in two quarters, the index’s growth has consistently been below the official figure since 2011. Its average year-on-year growth by quarter has been 4.9% since 2012 (7.4% in the case of the official figures).

So we have seen that, in the past few years, the economic activity index and GDP growth have followed different paths. But what can this pattern tell us? One possibility is that the technical adjustments made in the official data have concealed a sharper slowdown. But there is another possibility: as the economy is shifting towards aservices and consumption, there may have been a structural change in the economy which our economic activity index has not been able to capture. Whatever the case, it is reassuring to note that our index follows a similar trajectory to those produced by institutions such as Goldman Sachs and Capital Economics, which use other methodologies and variables to construct their economic activity indices.

The index’s trajectory therefore suggests that China’s economic situation may be less dynamic than indicated by the country’s official data. In fact, in the first three quarters of 2017, average year-on-year growth for the index was 5.3% compared with 6.9% for GDP. Moreover, in Q3 2017, year-on-year GDP growth was 6.8%,1 while for the index it was 1 pp less.

As noted, the trend in the index is particularly significant considering one of the big questions regarding the next few years revolves around whether China will be able to achieve an orderly rebalancing of its economy without causing any abrupt slowdown. Our findings are not entirely encouraging. It is also worrying that the economic activity index and official GDP figure are diverging at a time when fiscal and monetary stimuli have been extensively used to boost the economy, also resulting in macroeconomic imbalances such as increasing corporate debt. Achieving an orderly, smooth transition might be more complicated than would be expected. Moreover, if GDP has actually grown less than the official figures indicate, China’s corporate debt relative to GDP might be larger than initially thought.

Given this situation, the economic agenda Xi Jinping wishes to apply in his second mandate becomes even more crucial. Will he be able to continue pushing the economy towards consumption and services without accentuating the growth slowdown? As both fiscal and monetary policy are limited in scope, the onus lies on the planned structural reforms. In this respect, the new context could already be seen clearly in the second half of 2017 when economic stimuli started to diminish and, for instance, public investment declined. Of the past five years, 2017 has seen the lowest growth in central government investment while public corporation investment fell compared with 2016. Industries in northern China and Beijing have also come under an intense anti-pollution campaign that has restricted their production and is expected to continue.

This greater emphasis by Chinese leaders on a more balanced and sustainable economy was confirmed at the Central Economic Work Conference in 2017. Every year, this conference brings together members of the Communist Party Central Committee and the Chinese government to draw up the main guidelines for the country’s economic policy for the coming year. On this occasion, less emphasis was placed on growth and three key pillars were defined for 2018’s reformist agenda. The first is to improve deleveraging, both in the financial and corporate sectors, through greater bank supervision to ensure credit activity is managed prudently. The Conference also noted the need to reform the corporate governance of state-owned companies (estimated to hold almost two thirds of all corporate debt). The other two pillars focus on reducing rural poverty and pollution.

In short, the big question for the next few years is whether the Asian giant can complete its economic transition and reduce its macroeconomic imbalances without harming its economy to any great extent. This is an important question. The decoupling between official data and less dynamic economic activity figures against the backdrop of abundant economic stimuli suggests the Chinese economy’s ability to continue keeping economic troubles at bay over the coming years is perhaps more limited than we might have imagined. 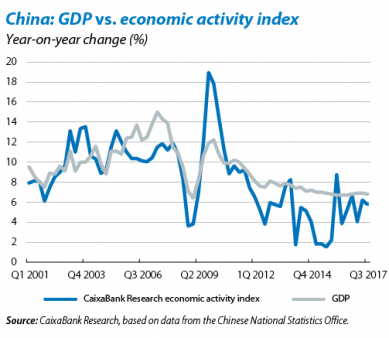 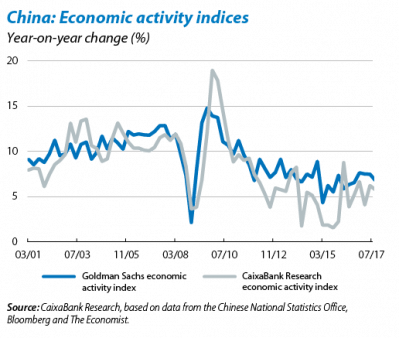 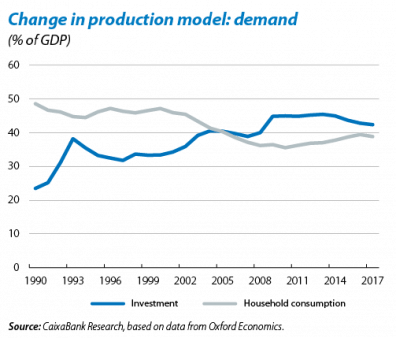