The minimum wage in the EU: beyond controversy

The minimum wage is a widely used policy in the EU, with 22 countries applying it, although it is not without its opponents.1 The aim of setting a minimum wage is usually to protect those workers with the least skills and/or work experience. Nevertheless, there can be negative repercussions for employment depending on the level at which a minimum wage is set.

More specifically, in a competitive labour market wages tend to reflect worker productivity: the higher a worker’s productivity, the higher their income. Setting a relatively high minimum wage might therefore encourage production processes to be automated, making it more difficult for less productive workers to find employment, who tend to have less training and/or work experience. But some workers might accept a job at a wage below what they contribute to the company. This may happen, for instance, if they believe it is difficult to switch jobs. A minimum wage could help lower-paid workers in such a situation. In any case, the higher the minimum wage, the greater the aforementioned negative effect and, in general, the smaller the positive effect.

So what is the level of minimum wage that provides the greatest benefits compared with the potential costs? Economists have yet to reach a consensus in spite of several decades of intense debate in the academic world.2 Generally speaking, empirical evidence points to the current minimum wage levels established in most developed countries having a moderately negative effect in aggregate terms. Several studies have also noted that the impact is greater for certain groups, such as young people and unskilled workers, precisely the groups such protection is aimed at.

The decision process followed to agree on the level of the minimum wage is crucial in minimising its negative impact. The mechanism used to establish this varies across countries in the EU. Some governments set a minimum wage directly via legislation while others negotiate with the social agents. But, in addition to transparent, it is also important for this mechanism to be thorough. It is significant that, in countries where the minimum wage has only been introduced recently, such as the UK, Ireland and Germany, a commission of independent experts evaluates, in detail, the minimum wage’s effect on employment and provides the government with a binding recommendation. Moreover, this recommendation often includes a lower minimum wage to be established for people who might be harder hit by a higher minimum wage, such as young people without any work experience.

Whatever the case, in an attempt to minimise the negative impact on employment, the minimum wage tends to be set at a relatively low level. This means it ends up having a limited effect on improving the conditions of lower-income workers. It is therefore useful to consider other measures in order to protect such workers. Firstly, logically, by improving their training and employability. This kind of policy does enjoy widespread consensus among economists. Measures are also often implemented that lighten the tax burden of the most disadvantaged workers. One such instrument that boosts the income of these workers is a complement to wages, such as the UK’s Working Tax Credit. This does not have a direct negative impact on employment and can be focused on the most disadvantaged workers, making it more effective.3 Finally, conditional benefit schemes have also been proposed in order to improve the conditions of low-income people, including those who cannot get a job. One such case is the minimum income, which could be useful if appropriately designed and implemented (see the Focus «Minimum-income benefits in a changing labour market» in MR01/2018).

1. Austria, Cyprus, Italy, Denmark, Finland and Sweden do not have a minimum wage although a large proportion of their workers are covered by collective bargaining agreements.

3. See the article «The use of fiscal incentives to increase the labour force participation» in the Dossier of MR09/2013. 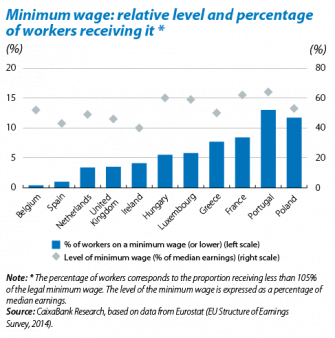