One recurring theme in the media is the relationship between geopolitics and economic variables. But not only in the media: economists are also increasingly aware of the importance of geopolitical risks in accurately gauging economic prospects. But although geopolitics may be in vogue, their relationship has hardly been quantified. This article provides a preliminary examination of the issue.

Finally, another way of quantifying t the relationship between the geopolitical risk index and economic activity indicators is to compare it with the correlation observed with indicators that are similar but from other areas. One good benchmark is the financial volatility index, the VIX, as it is commonly agreed that increases in the VIX tend to have a considerable effect on economic activity. An increase of the same magnitude in either index tends to be associated with a similar decrease in world GDP growth. Specifically, if we apply a shock to the VIX index equivalent to the one occurring in the geopolitical risk index in Q4 2016, the reduction in world GDP growth would be approximately 0.4 pp.2

Such findings are useful for a preliminary analysis of the relationship between geopolitics and the economy but they only measure correlations. In other words, they show how economic and geopolitical variables move in synch but do not indicate the cause of this effect
(Does geopolitical uncertainty increase purely due to geopolitical reasons or are such changes caused by other variables? ). To carry out a more sophisticated analysis, we have used a statistical technique3 that quantifies the impact of an exogenous uncertainty shock caused by geopolitical reasons, on the economy over time. As can be seen in the second chart, it is estimated that a shock of uncertainty, of a magnitude such as that occurring in Q4 2016, significantly reduces world growth by almost 1 pp between six months and one year after it occurs.

Finally, we have also analysed the importance of geopolitical factors for world growth over time. We study the relative weight of global geopolitical factors,4 of macrofinancial factors5 and of financial volatility (VIX) to explain the variation in GDP growth at a global level. The sample was divided into three periods: 2000 to 2007 (previous expansionary cycle), 2008 to 2012 (economic crisis) and 2012 to 2017 (recovery).

The findings are remarkable. Geopolitical factors are now less important compared with the expansionary cycle prior to the economic crisis of 2008 and 2009 but are still significant. Between 2000 and 2007, geopolitical factors carried a weight of 49% in the explained variance in global growth. Between 2008 and 2012, their relative weight was only 13% (macrofinancial conditions explained 62%, reflecting the impact of the financial crisis) while between 2013 and 2017, their relative weight was a significant 30% (volatility and macrofinancial conditions explained 41% and 29%, respectively).

The greater relevance of geopolitical factors between 2000 and 2007 might be due to the fact that geopolitical tensions were subdued (with the exception of the period 2001-2003, coinciding with the 9-11 attacks and the invasion of Afghanistan and Iraq), so geopolitics acted
as a key support for growth. On the other hand, macrofinancial factors have gained in importance since the crisis: quantitative easing programmes have helped to reduce volatility significantly6 and accommodative financial conditions have boosted economic growth. However, the importance of geopolitical factors seems to on the rise again. This trend could consolidate as financial conditions become less accommodative and if populism continues to spread. 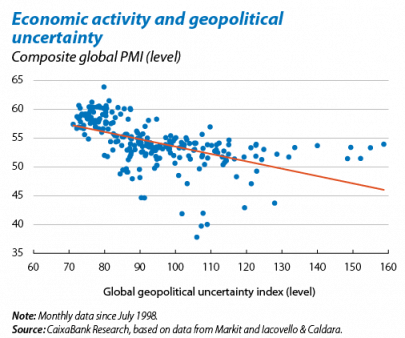 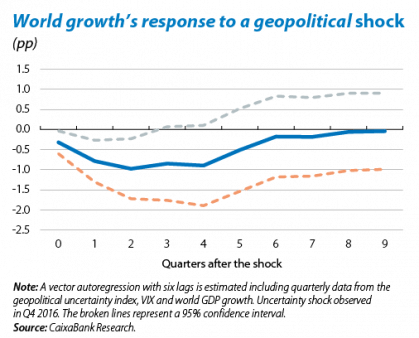 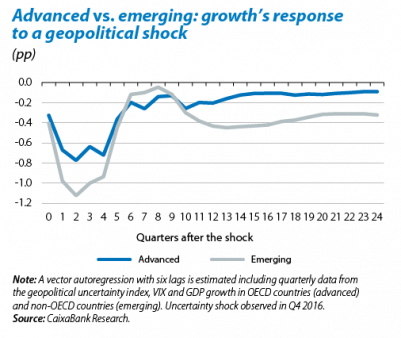 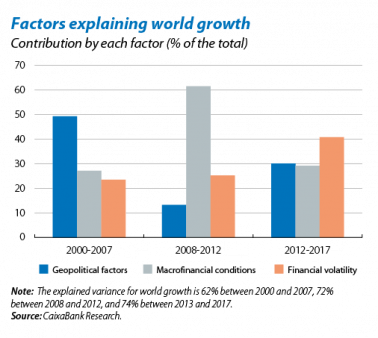