Despite the fall in recent weeks, the performance of the US stock market since the depths of the financial crisis has been nothing short of spectacular. Last September, before the recent turmoil, the market capitalisation of the S&P 500 registered several all-time highs. In fact, since July 2009 (the first quarter of the economic recovery following the Great Recession), the S&P 500 index has increased by 174%, representing an annualised growth of 11.9%. In light of these figures, the question is clear: is the US stock market overvalued?

The valuation of a company’s shares is determined by many variables, so answering this question is not an easy task. Nevertheless, there are several indicators that shed light on some of the determining factors and can help us to identify whether or not an asset is fairly valued. Among these indicators, one of the most commonly referenced is the CAPE (cyclically adjusted price-to-earnings) ratio, proposed by the Nobel laureate in Economics Robert J. Shiller. The CAPE ratio involves dividing the total capitalisation of a stock market index, or of a company, by the average of all the profits reported by the constituent companies, or the company in question, over the past 10 years.1 Thus, a company with a higher CAPE ratio than others indicates that the price paid for its shares reflects other factors besides the company’s past profits, such as the expectation of a future increase in profits, or an overvaluation of the shares.

The CAPE ratio for the whole of the S&P 500 has stood above 30 points since the beginning of the year, and in September it rose above 33. What do these levels suggest? On the one hand, from a historical perspective, this is clearly above the average level since 1881 (16.9 points). Furthermore, we must bear in mind that the CAPE ratio has only exceeded 30 points in the lead up to the stock market crash of 1929 and during the dotcom bubble of the year 2000. This suggests that the CAPE ratio is currently at notoriously high levels, which in the past has been indicative of overvaluation in the US stock market. On the other hand, the CAPE has a great ability to predict stock market returns over the medium to long term.2 In this regard, its current levels suggest that the yield of the S&P 500 over the next 10 years will be less than 4% per annum (well below the 11.9% registered between 2009 and 2018).

When it comes to searching for explanations for these high CAPE ratio levels, the finger has been pointed at the technology sector as one possible cause. This is partly because it was the source of the dotcom bubble in 2000, and partly because, since mid-2009, it has registered annualised returns well above those of the S&P 500 as a whole (nearly 20%). However, the data show us that not only is it the technology sector that is registering a relatively high CAPE ratio, but these high levels are a relatively widespread phenomenon among the sectors that make up the index. Moreover, a significant proportion of them currently lie above their historical average (see second chart).3

Another possible explanation for what could be driving the CAPE ratio of the S&P 500 upwards is an aspect related to the ratio’s methodology, the effect of which we expect to fade over the coming quarters. By including company profits from the past 10 years, the CAPE ratio is incorporating the low profits registered by companies during the Great Recession. Mechanically, by mid-next year, as these low profits from the past cease to be included in the formula, the average profit from the past 10 years will increase and will push the CAPE ratio downwards. Specifically, we estimate that this base effect could reduce this indicator by up to 3 points – a significant adjustment, although it would still stand at around 30 points.

In order to better understand how high the CAPE ratio currently is, it is also useful to analyse how it has changed over the course of the business cycle. The risk-free interest rate of the economy is an informative variable in this regard. Normally, in periods when interest rates are low, stock prices tend to be higher because the present value of the future earnings per share is higher, pushing prices and the CAPE ratio upwards.4 However, given that we expect US interest rates to gradually increase over the next few months with the Fed’s tightening of monetary policy, stock prices will find themselves in a less favourable environment. In particular, if we analyse the historical relationship between US 10-year government bond yields and the ratio proposed by Robert Shiller, this ratio tends to stand at around 25 points in a scenario in which the US government bond rate settles at close to 3.5%. A reduction in the CAPE ratio, by definition, would have to be caused either by a decline in stock prices or by an increase in company profits. Following on from this, if we take into account the 3-point reduction due to the disappearance of the base effect of the Great Recession, and we assume that company profits will continue to grow in line with the average growth rate of the past two years, a reduction in the CAPE ratio down to 25 points would require a stock market correction of approximately 12%. Besides the importance of interpreting this figure with caution given the high degree of uncertainty that surrounds it, a correction of this magnitude would not be negligible, yet it is still far from the corrections experienced in other periods in which the CAPE ratio stood above 30 points (in the case of both the dotcom bubble of 2000 and the crash of 1929, the stock market fell by more than 30%).

Another indicator that can help us to identify possible situations of overvaluation of equities is the implicit equity risk premium (IERP), which shows us what additional compensation investors demand to invest in stocks instead of in assets with a lower risk (such as US government bonds). Low levels of this measure suggest that investors require little compensation for taking risks, which could indicate that they are being complacent in the stock market, a situation characteristic of bubbles. There are several methodologies for estimating this indicator, from very simple methodologies to highly complex ones. One of the most widespread involves taking the discount rate of the expected future cash flows (mainly dividends) of a share and then subtracting the yield of the risk-free interest rate, to give the IERP.5 This indicator currently lies above 5%, slightly higher than the historical average of 4.1%. Although this indicates that investors require a yield clearly greater than that offered by government bonds, and it slightly alters the conclusions drawn from the CAPE ratio analysis, the downward trend it has followed over the last few years could be a warning sign.6

All in all, as we mentioned above, assessing whether a financial asset is overvalued is a highly complex task and the tools we have shed light on only a few of the many factors that determine stock prices. As such, there are several arguments that mitigate the conclusions to be drawn from the current high CAPE ratio. However, while it is tempting to think that «this time is different», we should not underestimate the predictive power of the indicators presented in this article.

1. An adjustment is also made for changes in consumer prices.

2. Specifically, it explains 80% of the variability in stock market returns 10 years in the future. See the article «US equity prices: a cause for concern?» in the Dossier of the MR11/2017.

3. The fact that the technology sector has a CAPE ratio that is not so different to that of other sectors indicates that the significant increase in the valuation of the sector’s stocks has been accompanied by a solid generation of profits.

5. See «The implied equity risk premium: a clearly imperfect indicator that needs to be taken into account» in the MR11/2015.

6. In addition, we must take into account the fact that the Federal Reserve’s mass asset purchase programme has lowered interest rates on US government bonds, which could have biased the IERP upwards. 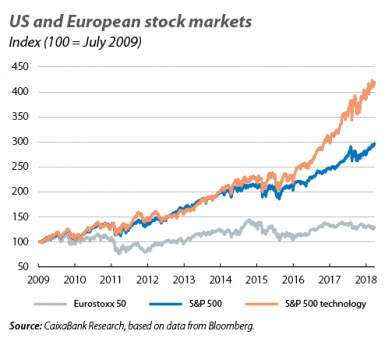 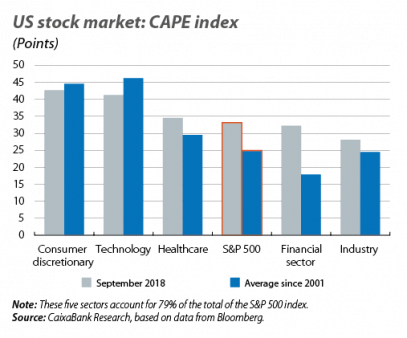 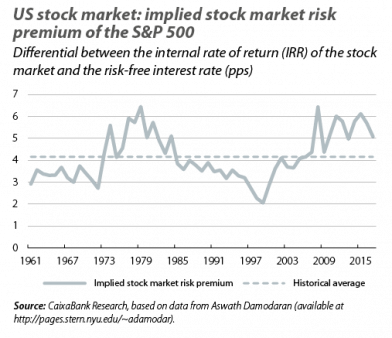