Less than six months before Brexit,1 there are still important hurdles to solve and the ratification process of the separation agreement in the United Kingdom could prove tricky. Adding to this, there are doubts over whether, after Brexit, the two blocs will reach an agreement that ensures a close relationship and minimises the economic damage of the separation. In this Focus, we will go over the main challenges that must be addressed in order to ensure an orderly departure of the United Kingdom and the process that begins immediately afterwards, which should lead both parties to agree on the framework of future relations.

The process for the United Kingdom’s departure from the EU appeared to be well set out when, back in December 2017, the EU and the United Kingdom laid down the foundations of the exit agreement. Specifically, both parties agreed on the amount that the United Kingdom must pay to the EU to honour its financial commitments incurred while the UK was part of the EU (the so-called financial settlement, or Brexit bill), the rights of British citizens currently residing in the EU (and vice versa) after Brexit, and the implementation of a backstop clause to ensure that the border between Northern Ireland and the Republic of Ireland will remain open, whatever the framework of future relations between the EU and the United Kingdom.2 Both parties also agreed, in March 2018, to establish a transition period after Brexit – until December 2020 – during which the two parties would negotiate their future relationship. In particular, it was agreed that, during this period, the United Kingdom would remain within the Single Market and the Customs Union in order to minimise any disruption and to help the economic agents to adjust to the new post-Brexit scenario. However, the entry into force of this transition period is conditional on both sides reaching a definitive exit agreement.

The relatively quick achievement of these goals had reduced the fears of a breakdown in the negotiations and a disorderly departure of the United Kingdom. In fact, it was hoped that the details of the exit agreement could be agreed on at the beginning of the autumn, so as to give both parties time to ratify it before the Brexit date.3

However, the negotiations are running into difficulties, which has delayed the formalisation of the final agreement until at least the end of the year. In particular, the two parties do not seem to agree on the form of the backstop clause on Ireland. For the EU, this provision must involve Northern Ireland remaining in the Customs Union and the Single Market for goods indefinitely. However, this would involve dividing the customs territory of the United Kingdom by imposing border controls between Northern Ireland and the rest of the United Kingdom – something to which the British Government is firmly opposed. It would also exclude Northern Ireland from any trade agreement that the United Kingdom signs with a non-EU country. For this reason, the British Government proposes that the whole of the United Kingdom (and not just Northern Ireland) remains in the Customs Union, de facto and temporarily, beyond the transition period. Likewise, it has also suggested the possibility of extending the transition period until the end of 2021, in order to provide more time for the negotiations on a future trade agreement (and thus avoiding having to apply the backstop). Thus, the United Kingdom seems to be trying to close the exit agreement without detailing the solution to the problem of the Irish border, whereas the EU would like to move on to the next stage of the negotiations with clear specifications on the backstop clause.

Beyond the exit agreement, after Brexit there will be important issues to be solved. In particular, the United Kingdom and the EU will have 21 months – if the transition period is not extended – to set out the details of their future trade relationship. Although the framework of future relations is currently uncertain, we do know the main areas on which the negotiations will focus and the initial position of each bloc.

For the EU, the future agreement must comply with the Union rules. In particular, ever since the start of the negotiations, the 27 countries made clear their commitment to the indivisibility of the four freedoms that govern the Treaty of Rome and the European Common Market, namely: the freedom of movement of goods, services, capital and people. The EU also made it clear that, when defining the post-Brexit relationship, it wants the United Kingdom to respect the balance of benefits and obligations that come with access to the Single Market.4 In other words, the EU cannot allow the United Kingdom to cherry-pick, choosing only those parts of the Single Market that are most convenient while rejecting those that are not. This is why, according to the EU, the United Kingdom can either accept all the obligations that come with access to the Single Market, as do non-EU member states that are members of the European Economic Area (such as Norway), or it can operate under what is referred to as a third country regime (as, for example, Canada does) and opt for a bilateral trade agreement with the EU.

The position of the United Kingdom, on the other hand, is less clear. What we do know is that the British Government will try to avoid crossing its red lines, i.e. those elements that are considered non-negotiable (see chart). Proof of this is that, in its so-called Chequers proposal – the United Kingdom’s first official proposal on the future relationship with the EU –, the British Government proposes to maintain access to the Single Market for goods, but without accepting the jurisdiction of the European Court of Justice in its entirety or the free movement of people. However, this is incompatible with the EU position of compliance with certain obligations in order to have access to the Single Market.

Therefore, given these constraints, an agreement that allows for unrestricted trade between the United Kingdom and the EU, but with unilateral control over immigration and no role for the European Court of Justice, seems unlikely. In this context, it is likely that the two blocs will try to negotiate an association agreement covering different areas (trade, security, defence and foreign policy) that keeps their ties as close as possible. However, any model for future relations that involves the United Kingdom leaving the Single Market and the Customs Union will entail trade barriers, especially in the trade of services, a sector in which the United Kingdom is highly competitive.

2. This clause would only apply until a future framework for relations ensuring that the border remains open comes into effect.

4. In addition to the free movement of people, access to the single market would also mean making contributions to the EU budget and accepting the jurisdiction of the European Court of Justice. 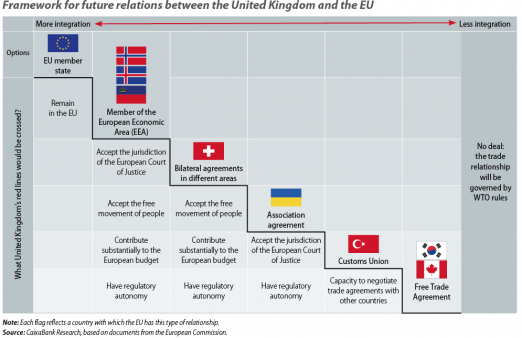