Mexico is an emerging sui generis economy. It has a higher income per capita compared to most other emerging countries. A portion of its qualitatively important industrial and service sectors are significantly integrated into the global economy. Furthermore, this segment of the Mexican economy benefits from a human capital that is comparable to that of many advanced countries. At the financial level, the market’s depth and integration is also higher than that of most emerging economies. It has also been ambitious in proposing structural reforms (although their results have certainly been less successful than desired). Finally, it has demonstrated two key premises in its economic policy: an orthodox approach to its public finances and an independent monetary policy, which have resulted in a comparatively lower level of macroeconomic imbalances compared to other emerging economies. This combination has put the country in a better position to deal with adverse shocks than it was in previously.1

Despite this favourable starting position, the notable political change posed by the new six-year presidential term (2018-2024), under the leadership of Andrés Manuel López Obrador, and more uncertain relations with the US than in the past have raised questions over the country’s real prospects for the coming years. In particular, there are questions over whether the economy will manage in an increasingly demanding global environment. Above all, it is important to assess whether Mexico’s economy is vulnerable to three possible shocks of global origins, given how important global factors are for Mexico. These shocks include a sharper-than-expected slowdown in the US,2 a significantly lower-than-expected trend in the oil price3 and a greater tightening of global financial conditions compared to what is currently anticipated.4

With regards to the first of these effects, it is well known that the Mexican economy is closely connected to that of the US. Therefore, we would expect to see a significant adverse impact in the event of an adverse shock in the latter country. Based on our own estimates, and as can be seen in the second chart, if US growth in 2019 were 1 pp lower than expected, Mexico’s growth would drop from the 2.3% estimated by CaixaBank Research for 2019 to 2.0%, and from 2.3% to 2.2% in 2020.

A second shock could result from a substantially lower- than-expected trend in the oil price. If the average price of crude oil in 2019 were 10% lower than expected, the historical relations suggest that Mexico’s growth would be 0.5 pps lower than in the central scenario in 2019, while it would not be affected in 2020. This is clearly a significant impact for 2019, but the estimate based on historical data is likely to be overestimating it to some extent, since in recent years the importance of oil in the economy has declined.5

One last shock could be generated by a sudden tightening of financial conditions. If the financial conditions of the advanced countries were to tighten by 0.5 points in early 2019 (slightly more than the tightening registered during the episode known as «taper tantrum» in May 2013, for example), Mexico’s growth for the year would be 0.1 pps lower than anticipated in the central scenario.6 Unlike with oil, where the historical relationship may be overestimating the impact to some degree, in this situation it is quite possible that the final effect is being underestimated, given the unusual developments in financial conditions seen during the years of quantitative expansion of the advanced countries’ central banks.7

The information provided by the above econometric exercise allows us to build alternative scenarios to the central forecasts (see the third chart). Specifically, taking the aforementioned underestimation and overestimation biases into consideration, we look to the corresponding side of the confidence interval to correct this bias. So, in order to develop the scenario involving a slowdown in North America, it is considered that the shock of US growth would probably be accompanied by a certain rise in global financial volatility. Therefore, the impact on Mexico would be somewhat greater than the sensitivity discussed above. Specifically, in this scenario, a more reasonable drain on Mexico’s growth would be –0.5 pps in 2019 and –0.3 pps in 2020. In a second scenario involving a fall in the oil price, the aforementioned decline in the importance of the oil sector suggests that the country’s sensitivity to this shock would be somewhat less and that growth in 2019 would fall by 0.3 pps, with no change in 2020. Finally, in a third scenario involving a tightening of global financial conditions, the impact on Mexico’s growth in 2019 would be –0.1 pps. In short, while the negative impact of these three shocks is not overbearing, it is by no means negligible, since it could push growth significantly below the long-term figure (an annual average of 2.5% over the last two decades), especially if more than one of them were to coincide.

Despite the external source of these shocks, containing the potential negative effects will depend in no small measure on Mexico’s ability to maintain its international credibility, which is currently high and above that of virtually any other emerging country. As mentioned in the introduction, the country has demonstrated a reasonably orthodox fiscal policy and an independent monetary policy – two elements that have given it an important anchor of stability and have provided a reasonably healthy macroeconomic picture. Therefore, it is key that the economic policy decisions of the new Government keep its reputation intact.

In this regard, the first decisions taken suggest that the new Government is sensitive to these needs and that, besides its communication style and one or two more controversial matters (such as a possible change to the regulation of banking fees, raising the minimum wage and suspending Mexico City’s new airport), it is adopting a pragmatic approach. In particular, investors have welcomed the draft budget, both because of many of the measures it includes and because it is based on macroeconomic forecasts that are in line with analysts’ consensus. It forecasts that, in 2019, a primary surplus of 1% of GDP will be achieved (slightly higher than that estimated for 2018, which is 0.8%). This is an ambitious goal that will help to stabilise public debt. It also foresees a total deficit of 2.5% of GDP. Although the containment of expenditure set out in the draft may seem somewhat optimistic, and we cannot rule out the possibility of deviations in terms of revenues, its key traits have reduced the risk of an excessive increase in expenditure (or perhaps only postponed it, depending on how the budget implementation progresses). This is based on various social transfers that were announced during the election campaign and before the inauguration of the new Government.8 In short, the draft budget offers an important signal in the right direction to reaffirm Mexico’s commitment to macroeconomic stability. The country has much at stake, and setting off in the right direction was key.

1. As an example, the significant tightening of monetary policy has put the country in a position to deal with a potential reference rate reduction in the future, if necessary. Many other emerging economies do not benefit from such a stand point. Furthermore, the fiscal policy margin is greater than in other economies, whose counter-cyclical capacity is limited by fiscal imbalances.

4. We estimate a Vector Autoregressive for US and Mexican GDP, for the Brent oil price, for the financial conditions index in advanced economies and for the Mexican exchange rate against the dollar. We use a sample of quarterly data from Q2 2003.

5. As illustrated by the fact that its production has gone from representing 7.4% of GDP in 2008 to 3.4% in Q3 2018. Typically, a shock of this nature could materialise through Pemex, whereby a reduction in its revenues could end up leading to lower tax revenues and affecting the perceived sovereign risk.

6. It should be noted that, due to the particularities of Mexico’s economy mentioned earlier, the country’s financial conditions have a strong correlation with those of advanced economies, and less so with those of emerging countries.

7. Since 2009, the volatility of GDP growth in emerging economies has been less sensitive to the financial conditions in advanced economies.

8. The increase in transfers of various new programmes has been offset by the reorganisation of many other pre-existing programmes, which are being shut down. 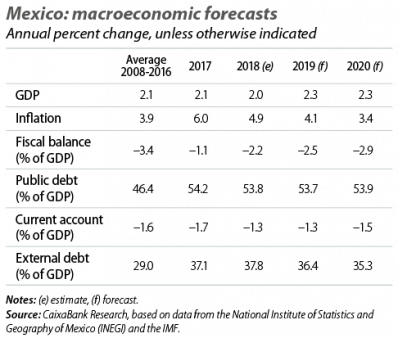 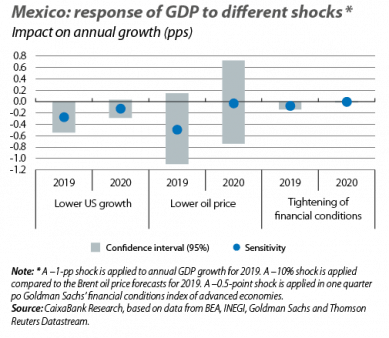 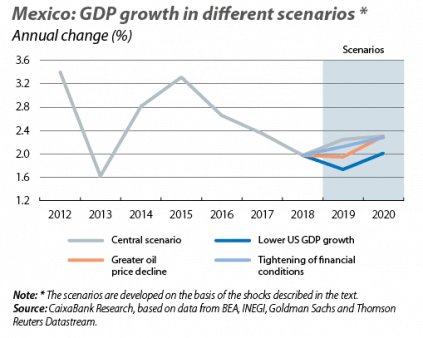