Writing the future: the technological paradigm shift and the new economy

Self-driving cars, robots that cook (almost) as skilfully as some chefs, software that can diagnose diseases, machines that beat humans at chess and game shows... All these inventions already exist... as well as those we have yet to see. In the words of the economists Brynjolfsson and McAfee, these technologies showwe are starting phase two of the second machine age.1,2 Phase one of this second age started in the mid-90s when information and communications technologies took over many routine tasks and changed how companies operated. But this second phase or new paradigm is very different because, for the first time, technologies are demonstrating they can also do non-routine work and learn how to solve problems on their own. This is a rapid, global, irreversible change which will have an effect on all sectors of economic activity. In this article we examine the potential impact of this technological change on the labour market, on the sectoral structure of the economy and on the organisation of firms.

Let us begin with the labour market. One of the key features of the new paradigm is that machines (mainly robots, new operating systems and algorithms) are expected to become more involved in the production process. This will have several likely consequences. Firstly, we expect jobs to considerably evolve over the next few years. As new technologies become integrated within the production process, certain tasks will probably be carried out by fewer workers and some jobs might even disappear (what could be called the «substitution effect»). This is happening already. For instance, in January Amazon opened a store in Seattle with no shop assistants or automatic tellers. However, at the same time other jobs are becoming more important, those in which the work carried out by machines and the contribution made by a worker complement each other. One clear example are those professions (managers, data scientists, statisticians...) that can make use of new digital tools (machine learning techniques, big data and software that makes accurate predictions) to improve their company’s service quality or its production efficiency. As happened in previous episodes of technological change, we expect this complementary effect to be greater than the substitution effect. For instance, 19th-century industrialisation destroyed some jobs in agriculture and crafts but this was more than offset by the boom in manufacturing jobs.

The impact of new types of jobs in the labour market does not end there. The change that is likely to occur in job types is, in turn, likely to significantly modify the skills required by the labour market. Occupations requiring social skills might become more important, such as knowing how to communicate, empathise and leadership, as well as teamwork skills. As new technologies take over an increasingly wide range of tasks, such as automatic learning and more abstract work, many jobs will have to specialise in those complementary skills which these technologies cannot develop, such as the ability to understand human feelings or what we tend to call common sense. Such changes can already be glimpsed in an interesting study which shows that, since 1980, jobs requiring social skills have increased substantially in the US.3

Finally, such changes in jobs are not only likely to increase labour productivity but also its dispersion. Productivity gains will probably vary a great deal depending on each job. It is reasonable to assume that productivity growth will be significant in those jobs that benefit more from the complementary nature of new technologies, while those not benefitting so much will lag behind. This phenomenon can already be seen and it is one of the factors that lie behind the greater wage inequality in many developed countries.4

Important changes are also expected at the sector level. In this case one of the potentially most disruptive phenomena isthat platforms, in addition to providing online products such as music and software, will probably offer an increasing range of physical goods and services, the so-called online-to-offline or O2O platforms. Today digital platforms are already involved in distributing a large number of goods and services. This practice will spread over the next few years but platforms are also expected to play a key role in producing goods and services, and to participate actively both in pre-production stages (R&D, design, engineering) and in post-production (sales strategy, marketing, logistics). In fact, it will be increasingly difficult to classify companies by sectors based on the definitions used today. Once again, Amazon is a prime example. The company that was set up in 1994 as a simple online bookshop currently offers a wide range of its own and third-party products, as well as data storage and processing services for firms.

As we move further down this path, in those sectors where platforms are in charge of the distribution chain, they are likely to forge synergies with other platforms and companies offering complementary goods or services. One such example is Spotify. Users can listen to music on this platform but Spotify also informs them personally, taking into account their musical tastes, about nearby concerts that may be of interest to them, as well as offering them the chance to buy the tickets via its app.

On the other hand, in sectors where platforms are also involved in production, they will become a serious rival for more traditional companies because they will be able to capitalise on a powerful digital structure with a large amount of data, allowing them to offer their clients more personalised services as well as more effective loyalty strategies. These new dynamics may result in a power shift in many sectors from companies to platforms, something which is actually happening already in the mobile phone sector. In 2015, Apple had 91% of the global earnings from the smartphone market. We should therefore expect traditional firms to differentiate their products as much as possible to set them aside from the platforms.

Finally, it is important to remember that this paradigm shift in technology is not only affecting the economy at a sector level but also altering the size of firms and how they operate. New technologies mean the productive structure of firms can be increasingly spread around the world, with more decentralised production and decision-making centres. This trend, which is expected to consolidate over the next few years, means that the relative number of freelance workers,5 company relocations and offshoring will continue to rise, and that firms will operate less hierarchically and become more dynamic and flexible.

As for company size, some authors6 suggest this paradigm shift will result in a new dual structure. Digital advances will help firms offering a higher quality product to expand their production and cater to more markets, encouraging winner-takes-all dynamics to continue. However, there will also be more opportunities for small firms specialising in very specific and sophisticated varieties of a certain product since, thanks to technological advances, companies can produce goods at an increasingly lower costs while consumers can quickly find product varieties that perfectly match their tastes and interests.

In summary, society is going through a paradigm shift in technology which is very likely to have a huge effect on the labour market, the sectoral structure of the economy and how companies operate. Taking the right decisions and being ready for such changes will be vital to make the most of all the opportunities such technologies offer. It is important to remember that technology may be a tool but we are still the ones who make the decisions. The key lies not in wondering what technology will do to us in the future but what we can do with technology.

1. The first age occurred with the invention of the steam engine in 1765.

3. See Deming, D. (2015), «The Growing Importance of Social Skills in the Labor Market», Journal of Economics.

4. For more details, see the Dossier «New technologies and the labour market» in MR02/2016.

5. 36% of US workers are currently freelance. 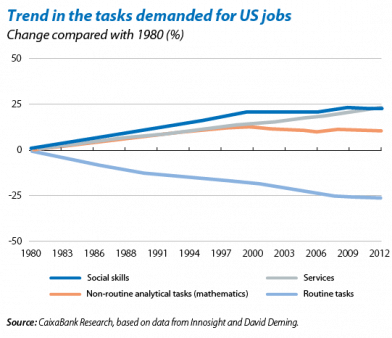