Measures to improve equality of opportunities

The vast majority of our compatriots prefer to live in a society that promotes equality of opportunities. There are a large number of circumstance we cannot control or be responsible for (where we are born, our family environment and also our race and gender) which may affect our situation in terms of our personal life, employment and ultimately income. For this reasons, public policies should as far as possible help to alleviate the consequences of such circumstances.

Public policies that aim to ensure equal opportunity tend to act in three areas or stages of our lives: early childhood, the educational stage and the labour market. Most of their measures focus on the educational stage since the human capital acquired at this time largely determines our professional possibilities. Actions are largely concentrated on two areas: mandatory education up to a certain age and the implementation of mechanisms to ensure universal access to good quality education.

But these two areas of action are not enough to achieve the goal of equality. Theability to take advantage of the educational resources available and transform them into human capital also depends on what we do when we are not in the classroom. In Finland, for instance, attempts are made to personalise the support provided to children by teachers, largely to remedy different personal situations. In Denmark class time has been increased so that pupils can do their homework at school, with the teachers’ support. As a result, children who might find it difficult to do schoolwork at home are not at a disadvantage compared with other classmates who have the support of their parents. This measure has also been introduced in other countries such as Greece and Cyprus but as an option, keeping schools open beyond the normal school timetable so that pupils who want to can remain behind to do their homework with teacher support.1

Another important measure applied during the educational stage is the elimination of early tracking and selection. An increasing number of European countries have abolished such selection policies. The theory is that differences in the knowledge acquired by children according to their social origin get smaller as they grow. Consequently, early selection and segregation in schools substantially reduces the possibilities of those children from a more disadvantaged background.

Measures are also required outside the classroom to improve performance within it. Family orientation sessions on the importance of education should also form part of educational policies. Social measures such as subsidised lunches are also important at this stage since a good diet is essential to achieving good academic results.2

And still in the area of education, new technologies can also be used to help equalise opportunities, especially in higher education. Information and communication technologies can ensure more access to the best teachers and best educational resources, for example through online classes. Distance learning also means that timetables are more flexible, allowing people to work and study at the same time, an indispensable option in many cases which helps to reduce dropout rates among the most disadvantaged classes in society. Artificial intelligence systems applied to education can also help teachers to detect certain specific learning difficulties at an early stage.3 Teachers can thereby adapt their teaching to the specific requirements of each pupil, increasing academic attainment. Technology also provides specific learning tools for these cases, improving the equality of opportunities between pupils with different abilities.4

Nevertheless, some aspects of technology can act as a barrier to levelling the playing field. The most obvious is unequal access to technology since those pupils with better access to digital tools tend to also be those who come from a family with a higher income level. Apart from limited access, it can also be difficult to use new technologies effectively in order to take advantage of the benefits they offer. It could therefore be useful to have a supervisor or expert adult to guide children in certain cases.

We will now move on to a different stage and look at policies focusing on early childhood. First of all, it is significant that an increasing number of measures are being implemented during this stage to level the playing field. Public policies applied in the first few years of life may seem to focus more on meeting basic needs than equalising opportunities but recent studies have shown that the pre-school stage is of vital importance for the child’s future development, both in emotional and cognitive terms. Nutrition, the mother’s good habits while pregnant and the newborn’s relationship with the parents before starting school largely determine the aptitudes and cognitive skills developed later on. Poor development during this initial stage tends to hinder success in the formal educational stage and, subsequently, in the labour market.

Assuming this stage starts during the mother’s pregnancy and ends when the child’s mandatory schooling begins (in Spain around six years of age), it is evident that many policies need to focus on the parents. For instance, measures that guarantee thorough medical supervision during pregnancy help to equalise opportunities. Policies to raise parent awareness of the benefits of a healthy diet or of establishing a good affectional bond in the first few years of life also aim to improve equality.

Some experts recommend a mandatory pre-school stage to encourage such good practices in children at the beginning of their lives. They claim that, in this way, all children would receive a similar level of «attention» in the first few years and would reach the formal educational stage with a similar background. However, making this mandatory at such an early age could conflict with the freedom of parents to choose how to bring up their children. In some cases it might even harm the infant since they might otherwise be receiving individual attention from their parents or an instructor hired by them. For this reason, several people have proposed longer parental leave, such as the 49 weeks in Norway, in order to help create the important affectional bond between children and their parents.

In terms of finding a job, some companies and countries have started to introduce blind pre-selection practices which aim, precisely, to avoid any discrimination.5 This also tends to promote diversity in the workforce, an added value that should be taken into account. France was one of the pioneers when, in 2006, it passed a law making it obligatory to carry out such blind recruitment procedures in companies with over 50 employees. However, these were not applied until 2015 since it is not easy for companies to adopt new recruitment methods, especially smaller ones. In Spain, in summer 2017, just over 75 firms and organisations joined a government programme to examine how to develop a protocol to apply an anonymous curriculum procedure at company level.

On the other hand, it is also important to keep opportunities equal throughout people’s careers. To this end, it is vital to promote equal opportunity and work/life balance plans in companies. Policies that foster continued training for workers also help to level the playing field during this stage.

In short, policies that aim to enhance equal opportunity attempt to compensate or eliminate the barriers which often arise due to circumstances beyond our control. Here we have seen how, in addition to policies affecting the educational sphere, it is also important to consider the pre-school and professional stages of people’s lives. Both areas are increasingly attracting the attention of the authorities to achieve the much desired goal of equality of opportunities.

3. In many schools children do mathematical or language exercises on computers using computer programs and tools. These programs analyse their answers to the exercises and can detect problems of dyslexia or dyscalculia, among others. 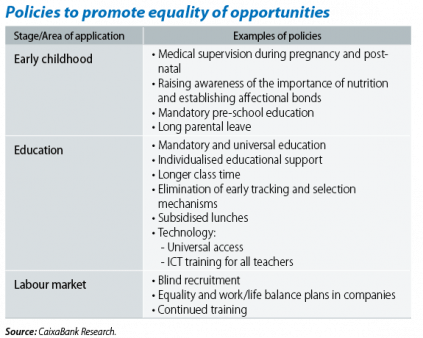