The emergence of the middle class: an emerging-country phenomenon

The middle class is experiencing significant growth in emerging countries – so much so that the strong economic growth and favourable demographic trends of the Asian continent (with China and India at the helm) will make the Asian middle income consumers the world’s new pillar of consumption. In addition, not only will its strength more than offset the stagnation of the middle class in advanced countries, but it has the potential to become a key driver for global growth.¹

Past and future trends of the global middle class: from advanced to emerging countries

• China and India, generating the new middle class. Since 2009, China has been responsible for the entry of around 700 million people into the ranks of the global middle class: 40% of all new entrants. Furthermore, the sum of China and India has contributed around 60% of the new middle class (some 1.0 billion people). The outlook for the next 10 years is not dissimilar, as both countries are expected to contribute a further 1.0 billion (again, representing around 60% of the estimated global increase). The only difference is that China’s and India’s roles as generators of middle-class population are expected to be inverted, with India anticipated to account for 40% of the total global increase. In more general terms, around 90% of new entrants into the middle class will be Asian.

The nature of the new middle class: more heterogeneous

• The rapid growth of the newly emerging middle class has not only led to the middle class finally becoming the biggest of the classes worldwide, but has also caused us to stop speaking of «a middle class» in favour of «a variety of middle classes».6 In this regard, companies and even public policies, whose main interest group is precisely the middle class, must be capable of adapting to the different middle classes that exist around the world.

Despite the increasing heterogeneity within the middle class, there is no doubt that Asia’s demographic dominance, led by China and India, together with its strong economic growth, will convert its middle classes into the new global consumers.

1. The definition of middle class that we use in this article is based on individuals’ spending capacity in absolute terms, i.e. within specific thresholds, between 11 and 110 dollars a day, that are comparable between countries, in purchasing power parity terms. This type of measure is more appropriate when performing a more global analysis such as this one. Relative measures are used when analysing changes in a single country over time or when comparing different countries that are at similar stages of economic development. See the article «Who is the middle class?» in this same Dossier for more details about the different ways to measure the middle class.

2. All numerical estimates are made using the methodology developed by emerging-country growth expert Homi Kharas, as well as by other experts who follow in his footsteps. See H. Kharas (2010), «The emerging middle class in developing countries», OECD Working Paper; H. Kharas (2017), «The unprecedented expansion of the global middle class: An update», Brookings, and data from the Word Data Lab.

3. See the other three articles in this same Dossier.

4. It is worth noting that, according to the latest estimates by the World Data Lab, the upper class of the US will lead the world’s great consumers in terms of their consumption. See «Who will drive consumer spending in the next decade» (publication of 7 November 2018 in OECD Development Matters).

8. See the article «The future of the middle classes: technology and demographics will bring change, but they will not disappear» in this same Dossier.

9. According to estimates by the Word Data Lab. 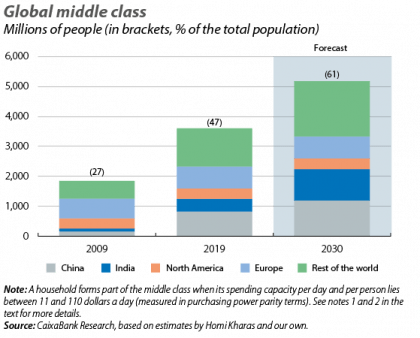 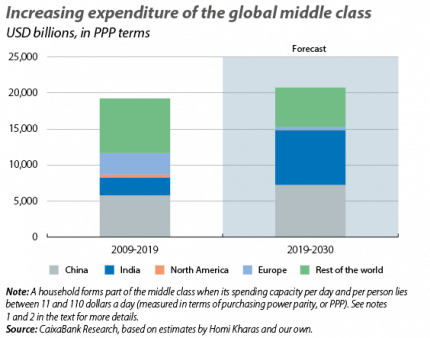