Emerging countries in trouble: who is who?

Since the Fed's change in rhetoric in May regarding the continuation of stimuli, alarm bells have rung non-stop among the emerging countries. In particular, and in spite of the recent slowdown, they have suffered from a continuous and noticeable capital outflow which has significantly depreciated their currencies (7% on average against the dollar).(1) However, five economies have been hit particularly hard, with much greater depreciation than the average: India, Brazil, Indonesia, Turkey and South Africa.

These five have a common denominator: sizeable and growing current account deficits which largely explain why they have been more harshly punished by the market. However, in spite of this common denominator they vary significantly in terms of their overall set of vulnerabilities.

For example, India is still pending significant fiscal consolidation to reduce its public debt close to 70% of GDP, which absorbs 3% of GDP in interest payments. Moreover, despite its lower rate of investment, the Asian economy was not able to correct its high current account deficit in 2012 either, not even by 0.1 percentage points. This correction is undoubtedly necessary and requires structural reforms (improvements in the financial sector, employment, law and infrastructures) to boost the country's still weak manufacturing industry.

Along the same lines, Indonesia has not promoted its manufacturing base very much either, basing its growth on the strength of domestic consumption and its commodities exports, which provided large current account surpluses until 2011 but in exchange for sharp adjustment when the commodities cycle went awry. All this in an inflationary context that hinders the consolidation of both Asian countries (see the map of weaknesses).

Nonetheless, the long-term growth prospects both for India and Indonesia continue to be significant at 6.5%, both countries still being very far from the advanced economies with a lot of room to improve, as well as highly favourable demographic trends (a young population with potential). This invites some optimism in spite of the persistent risk of a boom-bust type of progress if the necessary reforms are not tackled.

On the other side of the world, Brazil also has significant fiscal and external imbalances although not to the same extent as India. This could compromise its rate of growth in the long term unless a thorough plan of reforms is implemented that makes the business environment more flexible and improves logistical infrastructures. In spite of this, its large buffer of reserves (covering 19 months of imports) and the margin still available to implement fiscal stimuli will help maintain economic growth rates in the short term.

Lastly, not only do Turkey and South Africa have the largest external deficits of these five emerging countries but also the biggest gap compared with the optimum level fixed by the IMF.(2) This, together with a buffer of reserves(3) that is much smaller than that of the other three countries in question, exacerbates the considerable fluctuations in capital observed. Nonetheless, Turkey's growth prospects (4.4%) are considerably better than those of South Africa (3.2%). Its closeness to the European Union plays in its favour, especially considering that global value chains
are once again favouring a certain physical closeness.

In short, although they are generally classified as «emerging», not all these countries face the same challenges in the long term. Once they have surmounted the temporary over-reaction that often characterises financial markets, how they tackle these challenges will be crucial to forming a better or worse path for economic progress and will therefore determine their ability to recapture those capital flows that fled from them so anxiously this summer.

(1) Between the beginning of May and mid-September. 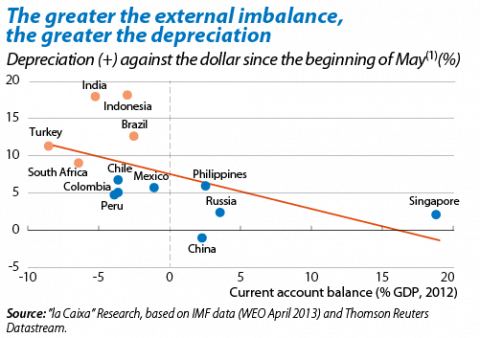